I’ve got a lot of other projects going on at the same time, and I’ve been trying my best to keep them all moving forward. Here are just a couple of examples. 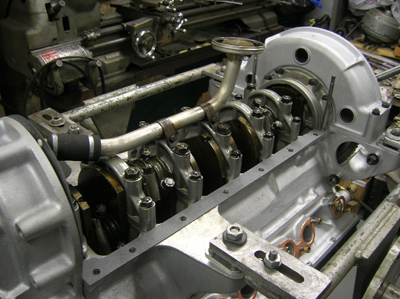 The engine to the 275GTS we’re restoring was entering its final stage of assembly. After the cam timing was checked for accuracy, Francois attached the oil pump pickup, and I installed the oil sump covers. 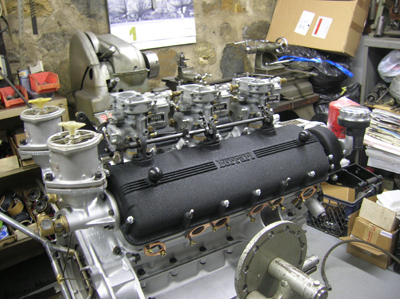 We flipped the engine over on the stand and installed the valve covers, distributor angle drives, carb linkages, and carbs. The starter was next and after it was installed, we primed the oil pump to make sure pressure was building on the engine. 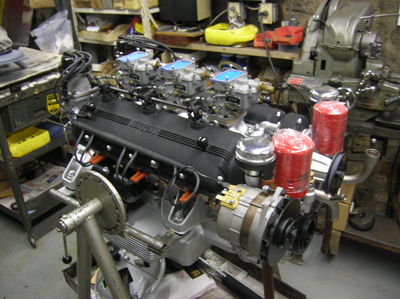 Although a lot of the accessories may have to come off when we install this engine into the car, checking that everything fit the brackets and lines were plumbed correctly was best checked at this point when the engine was easily accessible. 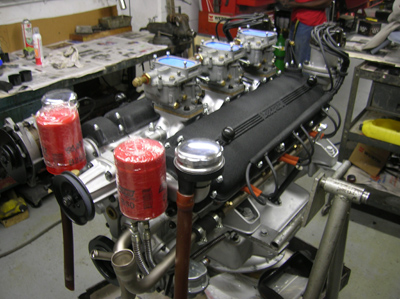 We have a couple minor detailing issues to address, but the engine to the 275GTS is basically ready to install. 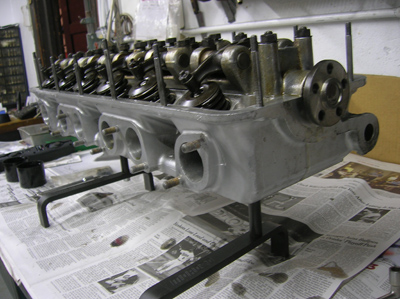 This head belongs to a 330 owner in Texas. I set valve lash while it was on the bench with a special splined tool Francois has to turn the cam. This engine is from a SII 330 which has a two mount block. It will be mounted on another engine stand, but we’re also expecting a SI 330 engine back from our machine shop that will be replacing the 275 engine we just finished. 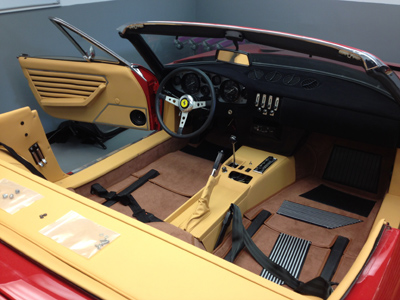 About 20 minutes away I had a customer’s Daytona Spyder at an upholsterer’s shop refurbishing the interior. Justin has done a lot of this work before working for his father, but has recently opened his own shop. My customer was willing to give him a shot at redoing this interior, and it’s looking pretty nice! 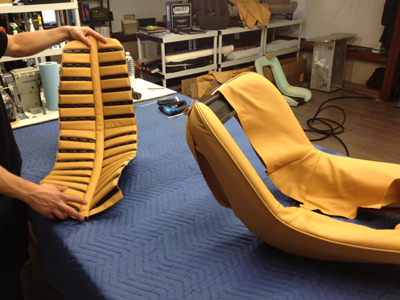 I’ve been stopping by the shop this week as he’s getting close to completing the job, discussing the work he’s done. 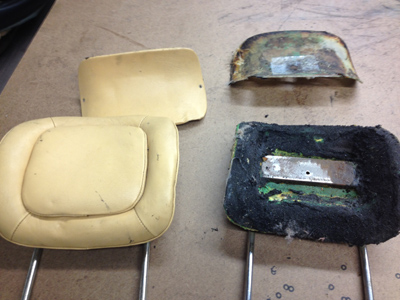 The interior has obviously been done by another shop before, and a lot of the under foam had to be rebuilt. Getting the foam underneath is important to get the leather on top to look tight and wrinkle free. 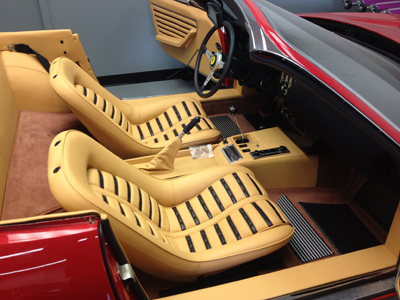 I’ve been running parts to my chrome plater like the ashtray and shifter plate. Little things like having material added to the shifter plate to restore the reverse lock out tab are things that can only be done at this point. All these details will make this interior restoration perfect! 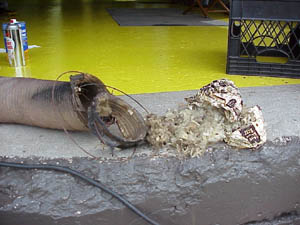 After thinking about the little mouse incident last week and reviewing what occurred, I looked back at all the other mouse incidents I had in Ferraris. Years ago when I restored my 330 America, I found evidence of the huge nest inside the fresh air vent of my car. Not only did the mouse use the stuffing from the seats and insulation, but you can imagine the face full of stuffing and mouse crap if this was left in the vent hose! 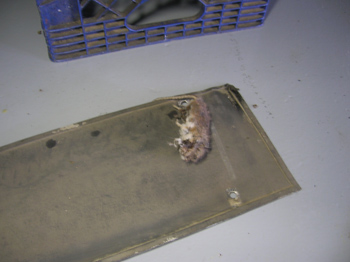 If these mice die inside the car from poison, they’ll stink up the car with their decaying bodies hidden deep within the recesses of the car! 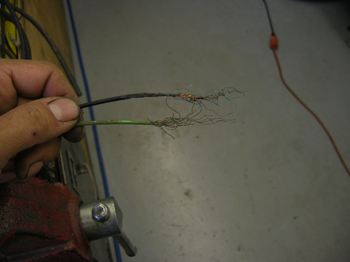 I’ve been to several customer’s garages, and often find they don’t have battery cut offs installed for their cars, and this is often alarming to me. I try to tell them it’s always safer to have a battery disconnected when storing a car unattended, but now I have a perfect example for them to heed my warning! The short circuit I found last week on the 330 was on a live wire from the ignition switch to the radio. It was an unfused constant hot feed jumped out of the ignition switch to the radio mounted behind the dash. Ferrari did not have fusible links on their wiring harnesses, so if this wire were thick enough, it would have shorted out until it caught fire. Add some of the bedding material that was near the chewed wiring, and you would have had a “perfect storm” for a fire. I’m glad we dodged a bullet on this wiring, and really had no idea when this nest was built, but checked the rest of the car for damage and found nothing else. Please let this story be a warning to PUT BATTERY CUTOFF SWITCHES ON YOUR UNATTENDED CARS! Even the cheap green knob switches for about $10 bucks will work. Please disconnect your batteries and sleep with some confidence!