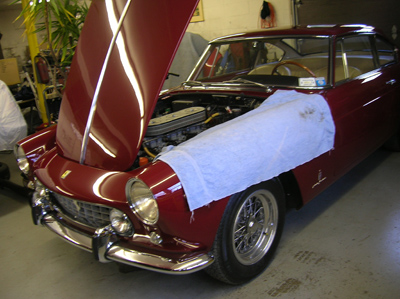 The 250GTE that came in a couple of weeks ago is ready to go home. After the carb service, I managed to set the timing a little better on the ignition. Sometimes, the angle drives for the distributors on these cars have to be re-indexed to get the proper timing, and if you want things perfect, a little more time has to be spent to get it right. Francois also changed the jets on the carbs to lose the hesitation we felt at mid throttle. With the new fuels, he’s found the only solution is to rejet the carbs. Each car is different, but this one responded nicely to the change. 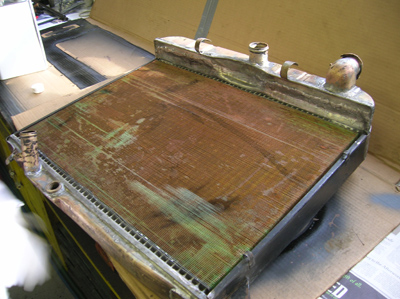 Yale’s 330 radiator came back from our radiator shop with a new core. 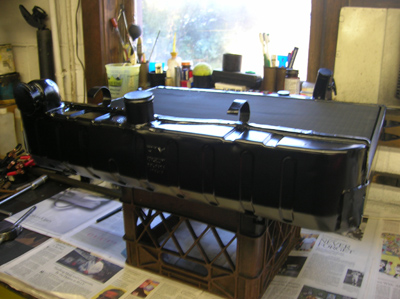 After a fresh coat of paint, it was ready to go back in the car.

Another thing on Yale’s list of to-dos was to find out why his tachometer stopped working. He feared the drive gear coming out of the back of the distributor had broken, but I told him not to lose hope. These angle drive mechanisms are getting harder and harder to find, and I heard reproduction units are priced over $1000 bucks! When I removed Yale’s drive, I found he was in luck. 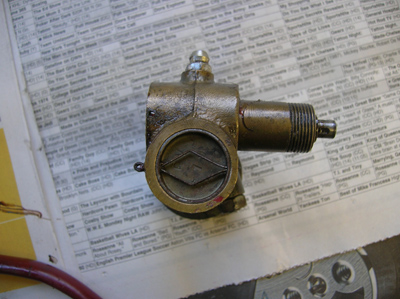 Normally, the cover plates on these drives are held in place with a cotter pin bent in this shape pushed through holes in the body of the drive. 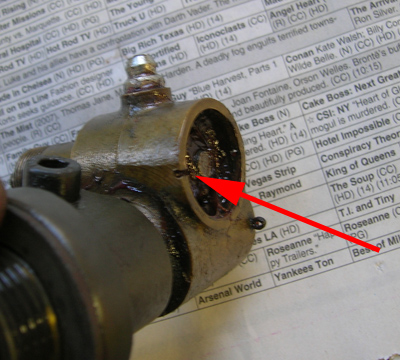 One of Yale’s covers had a hole that had split open, allowing the cotter pin to slip out of place. Luckily, the cover was still intact, and none of the internal pieces had been lost. Things had shifted just enough for the gears to stop meshing, so Yale’s tach stopped working. 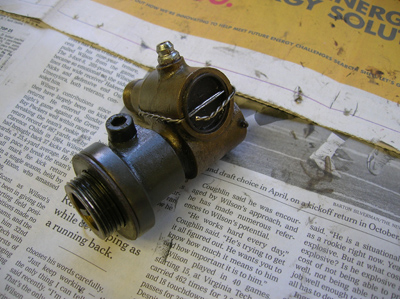 I put everything back together, but instead of a cotter pin, I wired everything back with some safety wire. It might not have been the prettiest solution, but it will keep his $1000 dollar tach drive from falling out onto the street! 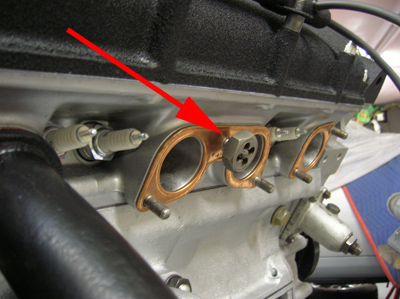 The 330 engine rebuild is coming down to the finishing touches. As they say, “the devil is in the details!” I chased all the exhaust manifold studs to make sure we wouldn’t have problems when the engine is installed and these studs are nearly inaccessible. 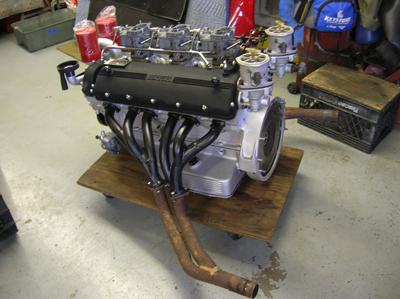 Since this engine is heading out to Texas, we’re going to bench fire the engine to make sure there are no problems or oil leaks before we ship it out. I spent some time looking for parts and pieces we have at the shop to put together some kind of exhaust system to fire up the engine. It’s going to be quite a spectacle when this engine fires up! 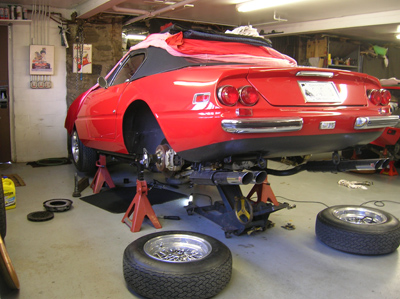 I had to squeeze in a Daytona clutch change this week at the shop! These jobs can turn ugly very quickly, but I was very lucky to have everything go as planned. Here’s a quick list of how involved this job can be.
Disconnect:
parking brake linkage
shifter linkage (after setting shifter in 2nd gear)
reverse light switch
speedo cable
half shafts
clutch lever and linkages
exhaust has to be loosened and tied out to the sides
torque tube nuts at bell housing end, and bell housing bolts

install everything in reverse.

There are a couple of innocuous steps above that if done incorrectly or forgotten that can double the amount of work. Forgetting to put the transmission in 2nd gear for instance can cause the shifter finger to loose its place in the gearbox when the linkage is removed. Sometimes the only way to find the correct position is to pull out the transmission! That was not even considering the usual stuck bolts or broken parts that needed replacing or fabricating. It was such a good feeling when the car was back on the ground, and moving through all the gears as smoothly as it should! 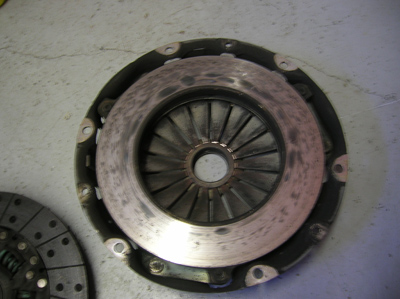 The pressure plate showed signs of overheating, so this clutch job was definitely due.