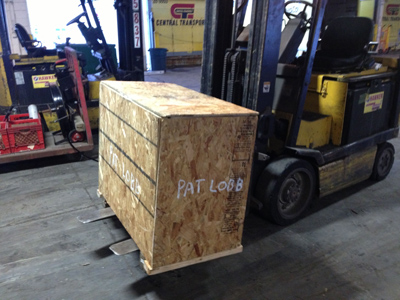 I had one more thing I needed to do before heading down to Florida, and that was to send out the completed 330 engine out to Texas. It was drained, crated, and loaded onto my truck and sent on her way. Pat called me a week later, and told me in his Dallas accent,  “Tom, we fired the engine right up and she sounds as good as a small block Chevrolet!” Knowing Pat’s collection has some very nice GM products, I took it as a compliment!

Any time I head out of town for business, I try my best to make the most of my time away. This year I made plans to meet an interesting person in the central Florida region. I heard for years about a secret collection of Vintage Ferrari cars in the Orlando region that was owned by a gentleman in the Real Estate business. He bought these cars in in the 1970s when they were just used cars. His passion led him to buy some pretty significant Ferraris, but as the hobby changed, he withdrew from the mainstream world of Ferrari Clubs and Shows.

Several years ago, I received an e-mail from someone who expressed his interest in my website and we started a dialog about our shared love of cars. He sent me some old photos of himself and his brother working on a 250GTO that was parked on a sandy driveway somewhere in Florida. With my neophyte knowledge of the names in the Ferrari world of 30 years past, I started to put two and two together.
I said, “Dennis, your brother isn’t Walter Medlin, the guy I heard about with all those Ferraris stashed down in Florida?”
“That’s him!” Dennis said.
We talked about the old days when the two brothers would drive the GTO to a meet, or when Walt would bring a P3 race car to a track meet just to share his enthusiasm with the rest of the Ferrari Community. Even Francois, my boss, remembers Walter showing up at the FCA meets in the 70s and 80s.

This year I asked Dennis if he thought Walter would be interested in meeting me for a cup of coffee if he was in town when I flew into Florida. It was a little forward of me, but I wanted to put the rumors to rest about who this modern myth in the Ferrari world was, and learn a little about the past before all these cars transcended into multi million dollar collectibles. To my surprise, Dennis came back and said Walter was free and would be happy to meet!

What was supposed to be a quick cup of coffee turned into a three hour lunch and my nearly being late for my next appointment, but what a nice time! Walt and I talked about how it all started with the Ferraris and how he loved to share it with everyone at the FCA events in the 70s. The enthusiasm for old Ferraris changed in the Club through the years, and Walter found more members interested in the newer cars and less interest in what he was bringing to the shows or the racetrack. The prices of everything started to rise in the 80s and his collection was no longer viewed as “great old Ferraris” but now simply as commodities. These and other factors found Walter withdrawing from the Ferrari Club. When a couple of publicized sales or purchases of his cars made statements of his personal life, Walter found even more reason to withdraw.

When I met Walter I found a man that was far from loosing his enthusiasm for Ferraris or anything mechanical. We talked at length about his purchases, sales, and feelings about the evolution of the Ferrari Club. I wish I had more time to spend with Walt, but I was lucky to have had the opportunity to meet a man of such Ferrari Lore. Thanks Walter for the generosity of your time, and sharing your passion with me! 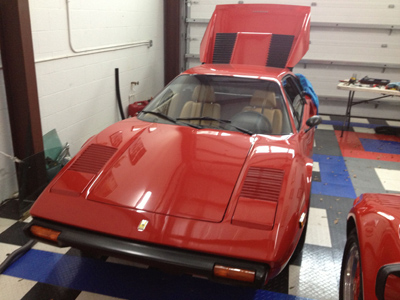 I headed to the Tampa Florida area to work on a car that was just out of my comfort area. Normally, I only work on cars built before 1972 because Francois and I believe specializing in a specific era of Ferraris allows us to do what we love and work on something we know well. The occasional Boxer or Ferrari built in the 80s will show up at our shop because they belong to one of our regular customers, but it’s not often. David Eichenbaum, the owner of this fiberglass 308 owns a PF Coupe that I’ve worked on in the past, and shared it’s story with many of you in Forza, and my website. In talking about his cars, David told me about the problems he was having with his 308, so I agreed to “swing by” when I came down to Florida for Cavallino. 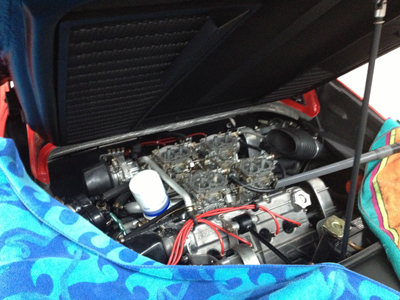 Working at a customer’s garage is never ideal, and it’s often made harder when it’s not fully equipped. No matter how much I try to bring what I think I’ll need, I always find I’ll need something else. I managed to pack a few special tools, and gave David a short shopping list of tools he should have anyway at his personal shop. 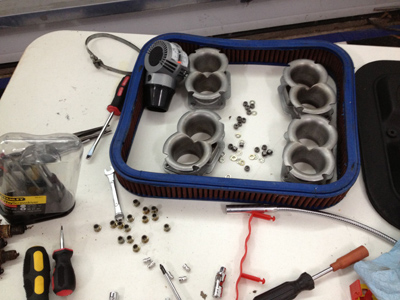 There are a ton of little washers and fasteners on a 308 air cleaner, and the potential for disaster if one of these pieces fall down a carburetor. Counting everything, and checking for missing pieces before you take everything apart is absolutely necessary, that way there will be no doubt when the parts go back on the engine. 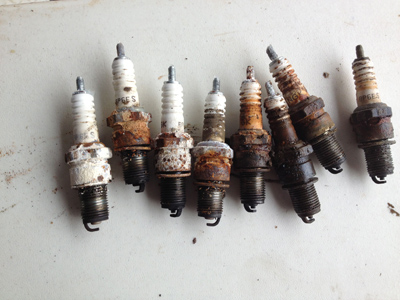 David said the car was not running well since the last time he took it to Cavallino, and she was running progressively worse, eventually refusing to idle at all. Pulling the plugs gave me my first clue to the problem. 308s have boots that are supposed to keep water our of the spark plug holes in the heads, but it looks like after this car was detailed for the last show a year ago, the water that got down inside the spark plug holes was not blown out. The boots may not have done a good job at keeping water out, but they did a great job at trapping water in! We were very fortunate none of these steel plugs seized into the aluminum head of this Ferrari! 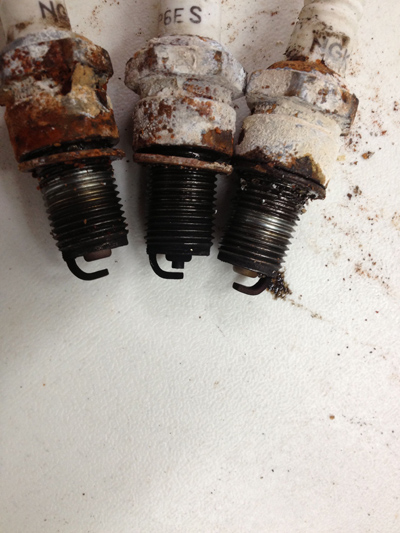 These plugs looked like they had not been changed in a long time, and three of them had no electrode left at all. It was obvious there was something causing this problem, but a new set of plugs at least got the car started, running, and idling. I balanced the carbs to make the car run a little better, but knew there was not much else I could do without more tools. My fear was if the plugs looked this bad, what condition were the points? Access to one distributor required removing an oil line, and I explained to David the limits of our repair at his garage. 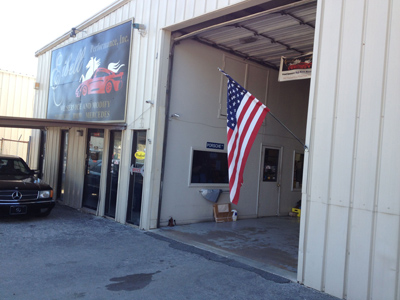 David had not found a good mechanic yet to service his Ferraris near his home, and shipping the car back to my shop in CT was ridiculous for minor issues and general maintenance. I heard about a shop not far away in Clearwater, FL called Eibell Performance. I stopped by for visit and met Frank Eibell. We chatted a while and shared some stories, and it seemed Frank had been doing this for a long time. We’ll see what David does with his car, but it was nice to know he had an option nearby!