I got a call last week from a friend of mine that I have not spoken to in a couple of years. After the friendly catch-up with each other’s lives, I asked Mark what was up. He told me he was doing LeMons racing, and had put together a good team. If you’re not familiar with LeMons racing, you can read about it here http://www.24hoursoflemons.com/, but I call it “The Burning Man of Auto Racing,” and something I’ve always wanted to do. Mark told me he had a last minute cancellation and was wondering if I would like to fill in as a driver.
“Sure, I’ll do it. When is the race?” I said.
“Next Weekend” said Mark.
“Wow. Sure, why not!” 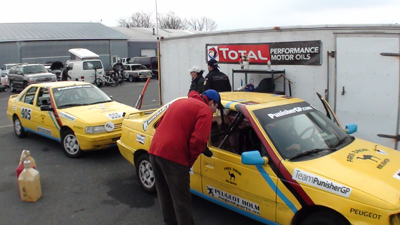 As much as it’s a big party of lunatics at a LeMons race, it’s still real racing. The basic rules are the competitors have to arrive in a car that they bought for $500 dollars, excluding safety equipment, and run them in an endurance race for as much as 24 hours. The race I was asked to drive in was a 16 hour enduro over the course of two days at Monticello Racetrack in NY State and my team would be campaigning a pair of Peugeot 405s. 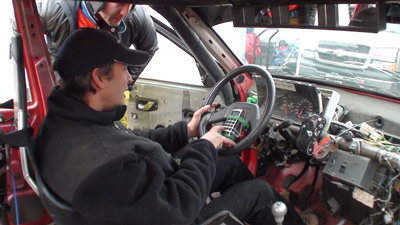 Mark is brothers with two other guys that make up the core of the group, but most of the guys knew each other since they were kids. Mark was the chief mechanic, and comes with heady experience wrenching on Porsche street cars during the week, and often traveling with professional Porsche race teams on the weekends. 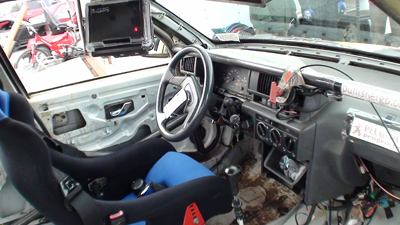 Mark’s brother Paul had a Peugeot street car, knew where to get parts, and how to keep them running, so it became the obvious choice for a LeMons car. 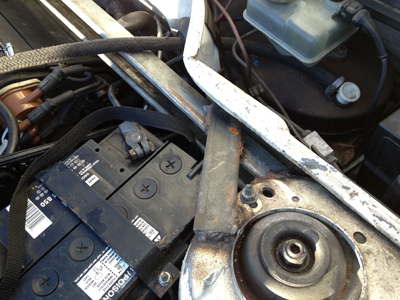 The ingenuity of keeping things under budget was fantastic. I loved seeing all the simple solutions to make the cars more reliable, and more race ready without spending more money. Check out this cheap strut tower brace in their car! 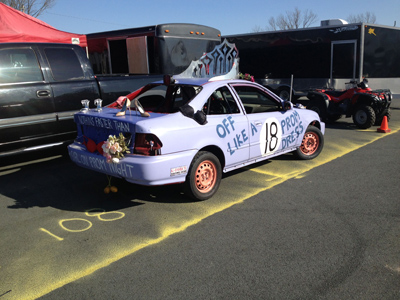 LeMons racing wouldn’t be LeMons without spectacle, and there was a lot of it! With three classes, A, B, and C, from fastest to slowest, some cars were never expecting to finish with any respectable times, but being among the group of LeMons racers was enough for some! 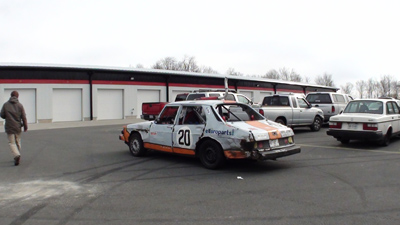 There were also some serious “wolves in sheep’s clothing” floating around the paddock. This Saab had a monster turbo with the exhaust routed along the roof! 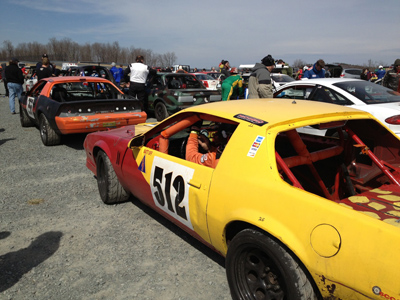 There were also some fast Camaros in the pack. 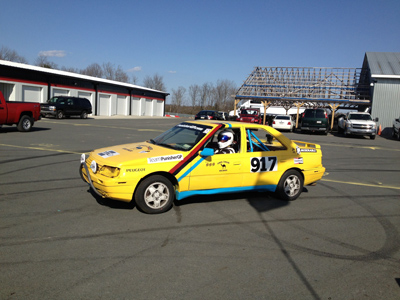 Although our cars were front wheel drive four cylinder cars, we were looking at the race from an endurance perspective. These cars were easy to drive and fuel efficient. The strategy was to stay in the car for as long as our fuel would last on a fill up. Car #917 had a freshly transplanted engine with over 100K miles and most of the dash gauges weren’t working. 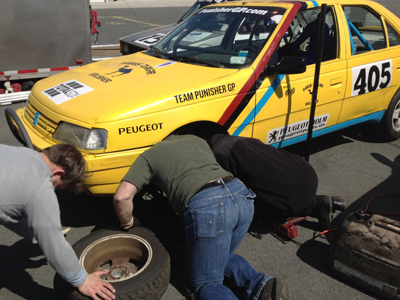 Car 405 had a new rod bearings, but the bottom end had already seen about 150K miles. In this picture, the guys were trying to secure a loose CV joint boot with tie wraps. After this fix, the boot never leaked again! 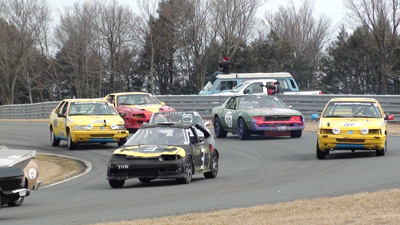 The racing was insane! There were over 100 cars at the start of the race, and there were often three wide into some turns. I was surprised how little contact there was with such a spread in ability and speed. The lack of contact did not mean there wasn’t a lot of yellow flags. Cars were breaking and crashing from the very beginning. If you over cooked a turn, you were usually black flagged and made to sit out a couple of laps, and any contact with another car brought the same consequence. The safety car was out on the track at least every 10 minutes! 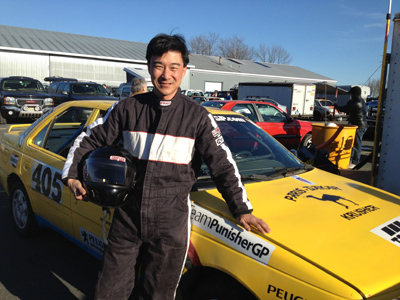 The guys were nice enough to put me in the car at the end of the first day of racing for the last 2-1/2 hours after some of the field was eliminated. I managed to hold my own and posted average times. I wanted to do well for the team, but also knew in endurance racing, half the battle was finishing the race. I drove a clean race, held our position and had a load of fun. The car held together well, and I was surprised how well the 5 speed transmission kept up on the track. I confirmed with my co-drivers the oil light was starting to come on at idle, but would go out above 1500 rpm.

During the evening debriefing, Mark and I discussed some of the mechanical issues with the cars. The low oil pressure on #405 was worrisome, but Mark was more concerned with a small gear oil leak from the transmission. Our plan was to top off the transmission, and ask the drivers to monitor the shifting. If any shifting problems arose, they were told to come in so we could add oil. 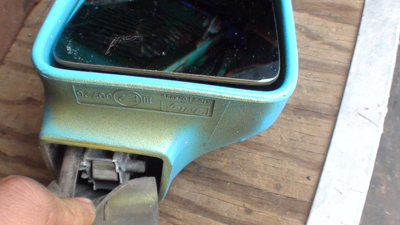 Even simple changes could have turned into big disasters. As the first driver was being readied for the second day of driving, a mirror adjustment was met with a crack! The pot metal arm sheared off, and the cars were starting to stage for the start of the race! 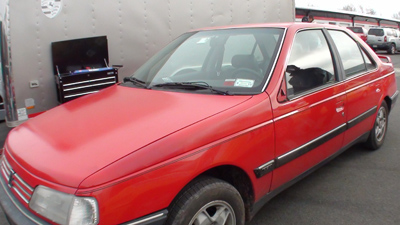 Paul’s car had already donated a right rear caliper to one of the cars, but now we were scrambling for screwdrivers to remove the side view mirror! 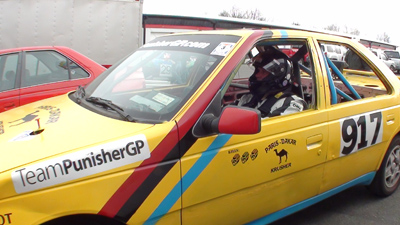 In less than 3 minutes, we had the mirror swapped out and the car got to the stagging area in time. I’m glad I wasn’t the one who had to tell Paul we cut the wiring harness to the electric mirror to do the swap so fast!

The second day went really well. We manged to keep both cars within a couple of laps of each other, and even moved into 2nd and 3rd place in our class! After a few hours of racing the 405 car came in for some more gear oil. Mark and I crossed our fingers for the gear box to hold out until the end.

Instead of having a gearbox problem however, something much worse happened to #405. Coming up the back straight on the south course before the chicane, the low oil pressure reared its ugly head by overheating a connecting rod, and throwing it out of the bottom of the engine! A car following the Peugeot caught all the action on video as well as the rod end cap smashing the windshield! 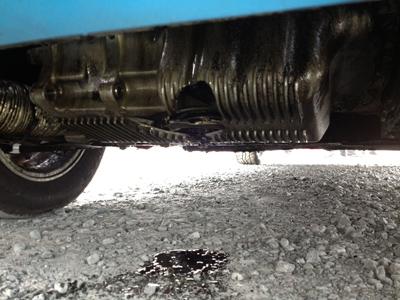 Car #405 was done for the day, but we still had one more car, and through a mistake made by the lead car in class, we were now in the lead by 5 laps! 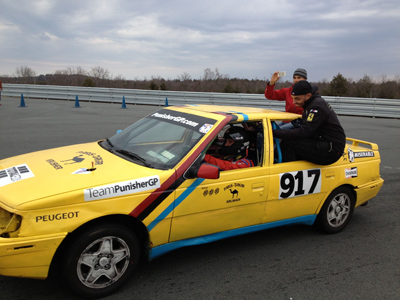 We held our breath, and watched the clock tick away hoping our $500 dollar car would hold together, and there was nothing better to watch that little yellow car cross the checkered flag! We won Class C in LeMons Racing! 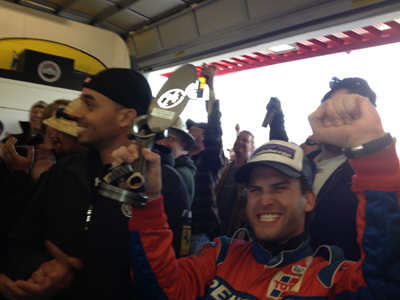 I was lucky to have been asked by such a great bunch of guys to drive for their team, and even luckier to have shared in a victory! Thanks Team PunisherGP for a weekend of racing that I’ll never forget!