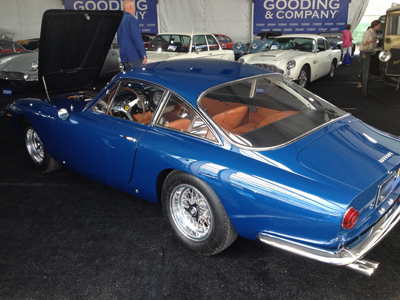 I arrived in Monterey on Tuesday night relatively unscathed and began the process of getting ready for the busy weekend. I was staying at my friend Michael’s house in Quail, so that took a great burden of stress out of my life! I picked up a wrist band for the Gooding Auction on Wednesday and checked out some of the cars during the preview. With the rising prices over the last couple of years, the Monterey auctions are definitely worth watching to gauge where the market is going. 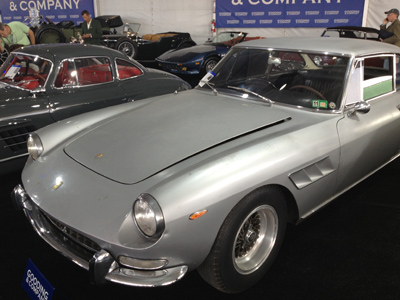 Seeing these cars in person really helps understand why certain cars can sell for so much money. It doesn’t take long to recognize a car “tarted up for sale” or a very nice restoration when looking at these cars up close. 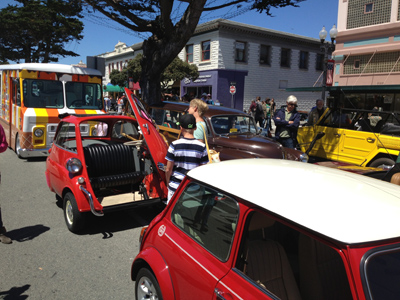 I had lunch in Pacific Grove and caught “The Littlest Car Show” along the main street in town. The entrants have a displacement of less than 1.6 liters and there was quite a variety of tiny cars. It was fitting that the TLC Show fit in only a couple of blocks! 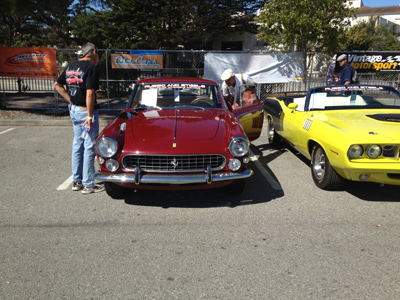 On Thursday morning I popped over to the Russo and Steele Auction in Monterey to see a 330 America that was slated to cross the auction block. With only 50 made, and certainly less in existence, these cars rarely come up for sale. I looked over the car and found a lot of little trim pieces missing. Although nothing major was missing, sourcing the little bits on this car could prove more costly than it would seem. A couple a days later this car sold for more than $320K plus buyer’s commission. I guess I’ll need to reassess my insurance coverage again on my own 330 America! 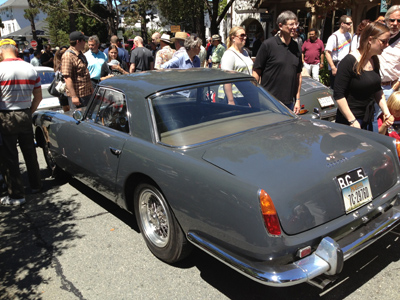 I worked my way over to Carmel to watch David Eichenbaum and his wife Erin drive their 250PF Coupe into town during the Pebble Beach Tour. Watching the tour has been a great way to see many of the cars being shown at Pebble Beach in motion and driving on public roads. This drive has attracted so many spectators that it’s nearly impossible to get near the cars when they’re parked. The mechanics and restorers often stand next to the cars gritting their teeth hoping a spectator won’t scratch or damage their customer’s cars! Luckily for David, his “Preservation Class” car had plenty of “patina” so the stress of damage was a little less of a concern! 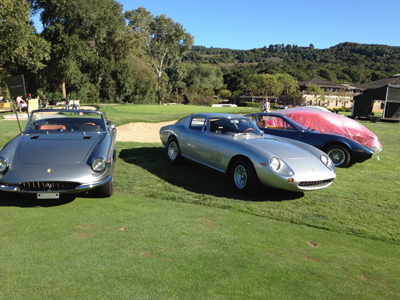 Thursday afternoon was a good time to get the cars placed on the lawn at Quail and I had two 275GTBs to place. The silver, long nose, 6 carb, German delivery, bumper delete, GTB was one I helped restore was from a customer of mine from NY, and a second red four-cam was from LA.  Thursday afternoon was also when I hosted my annual party at Quail Lodge so there was a lot of running around! There seemed to be some kind of indecision to where to place the 275GTBs since there was 6 of them in the show. I guess my idea of delivering the cars early was going to backfire! 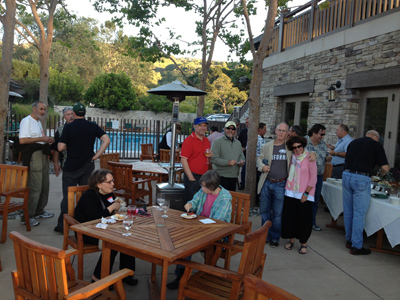 The party was another success with many old friends and new from the website dropping by for some cocktails. Having it at the back patio at Quail Lodge also gives us a chance to take a peek at some of the cars parked on the lawn the day before the big event. This was my third time at the Quail, and I hope to make this a regular event during the Monterey weekend.