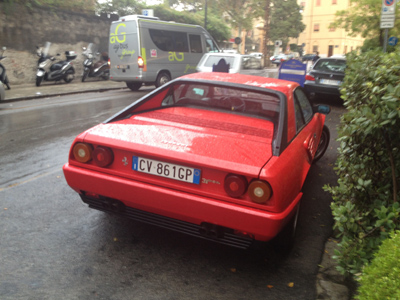 I got up early to familiarize myself with the Ferrari I would be spending the next couple days driving. The car was a 1986 Ferrari Mondial with a 3.2 liter V-8 engine. In the States these cars usually sell for about $20-$30K depending on condition. This is about the cheapest Ferrari one can buy, and unfortunately, many of them have seen years of deferred maintenance, and are not very reliable. This neglect often gives this model a bad name and it’s sometimes not the fault of the car, but I’ve also worked on enough 80s vintage Ferraris to know both the manufacturer and the owners are to blame for their share of problems!

When Chris got word the Targa Florio Classic was going to be canceled, he called his friend in Milan to start looking for a cheap Ferrari to enter into the Ferrari Tribute event. Chris has a RHD 308GTB that he keeps in the UK, but he wanted to supply me with a Ferrari so we could drive the Targa together! Scouring the want ads in Italy, Pietro found the usual crappy Ferraris that would have not made it down the street, let alone 1000 miles on the island of Sicily! Miraculously, he found a nice low mileage Mondial near Milan, but the car needed a clutch. With four days to go for the start of the Targa, Chris bought the car and had Pietro put in a new clutch! I can’t even tell you the inordinate amount of luck Chris had finding a car, buying the car, changing the clutch, finding no other problems, and bringing the car to Sicily the night before the Rally. As Chris says, “I’m very results driven!” 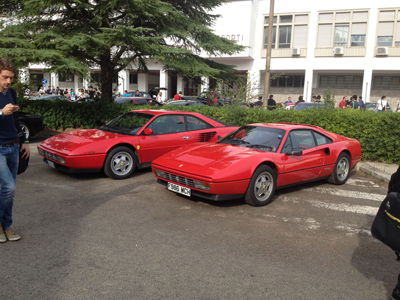 We drove both cars over to the University of Palermo for the pre-start grid. We received the stickers and credentials for the cars, and ran both cars through tech. I was amazed that all the micro switches and solenoids that opened the trunk, engine lid, and gas filler worked. The Mondial was in near perfect shape! Chris’ 328GTB was even nicer, but he’s spent the money and time to get his car sorted. It was a rare right hand drive car, and he would have to navigate it through a LHD world for the next couple days, but from what I was learning about Chris, there was “no problem!” 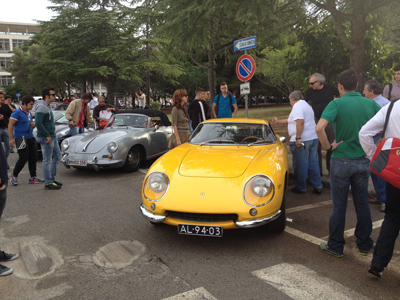 I was happy to see a few vintage Ferrari participating in the event including two 275GTBs, but the majority of the cars were less than 15 years old. 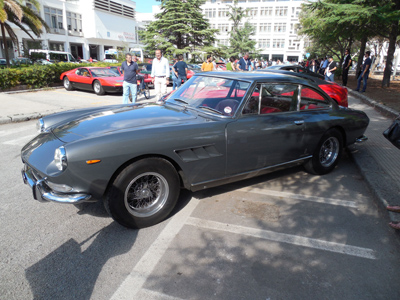 I was especially pleased to see a SII RHD 330 entered in the rally. Richard, the owner of 8449, and his navigator Mark, were both from the U.K. 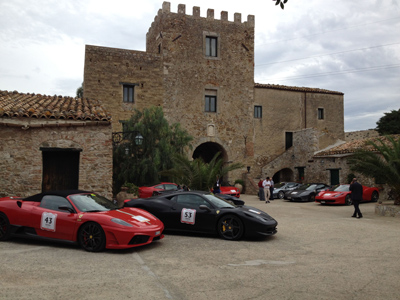 The cars left the University to meet up outside of Palermo for lunch before the official start of the rally. This gave us a chance to familiarize ourselves with the road book, and the dynamics of the car. Lucky for us, there was a long wagon train of cars leading out of town so we made it to the first stop without worry. 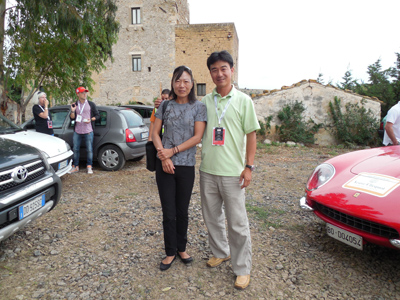 When Chris heard my sister Judy didn’t have a ride on the Rally, he pulled some strings and told her to pack an overnight bag. 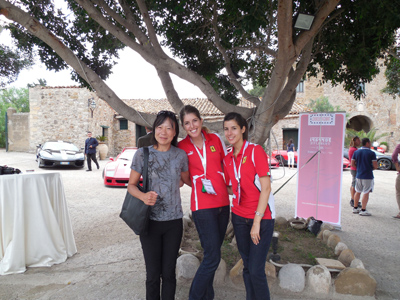 The next thing I know, the Ferrari people provided her with a seat in one of the support vehicles that would be following the whole circuit! My sister would have a front row seat and an insiders look at the whole rally! I was beginning to sense a theme with Chris’ abilities as a guy who gets things done! 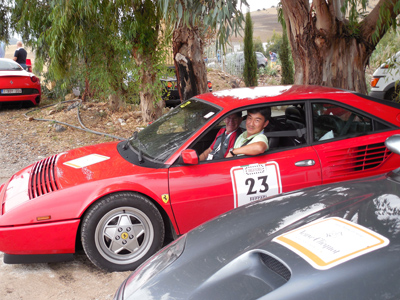 After lunch we sat with nervous anticipation for the start of the rally. Since I had never done one of these before, I had no insight to reading the road book, so I left Bob to the task of asking, listening, and learning as much as he could about navigating. We both had no idea what to expect. 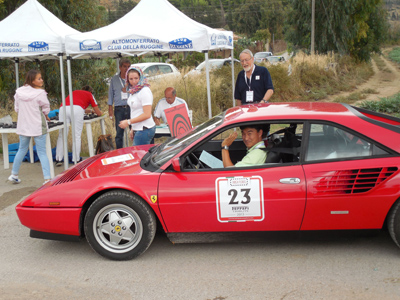 A transponder was installed on our car that would track us with GPS data during the whole rally. There was a trouble button we could hit on the transponder if we got into trouble, but it operated on the cellular network so the extent of the coverage was not known. Basically, they were telling us that if we decided to crash, crash where there was cellular telephone coverage! 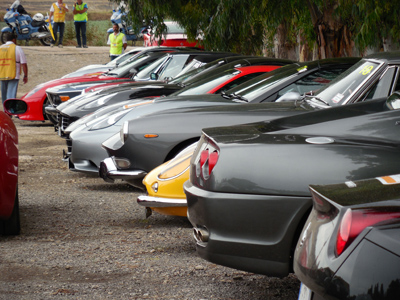 The first four hours of the rally was pushing our minds to full information overload! The car was responding really well, and the gearbox was working flawlessly. With about 50,000 km on the odometer, this was a nice unmolested car. The tires were a little old, so I had to be careful how hard I exited the turns on all the surfaces, and I found out very quickly the ABS was not working! The outward visibility on this car was outstanding and even though the seating position was upright, it was perfect for this type of driving. At 100mph the car tracked nice and straight, but I tried not to go much faster because of the unknown age of the tires.

Every stage had a staggered start to space the cars at least 30 seconds apart, so it was important to be able to read the road book until you either caught the car in front of you or the car behind you passed. There were several times I though Bob was going to crack under my demands for information on the route, but he managed to just keep up! I tried my best to keep up with Chris in the #22 car, but he was pretty fast and confident on these roads. Driving faster also put more demand on my navigator to keep the information flowing even faster, so it was a lot to ask.  As much as I wanted to catch him, I also didn’t want to be the one that crashed on the first day! 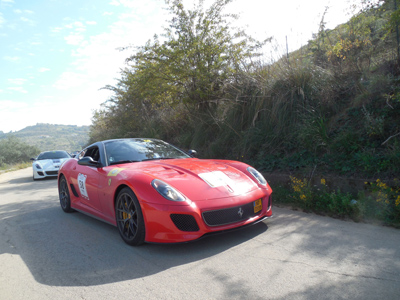 The positions of the cars was constantly changing. The fearless drivers with more horsepower would pass whenever they got a chance, and I often pointed them by. There are very few rules for driving in Italy, and Ferraris seemed to have Carte Blanche! Most of the new cars have F1 paddle shift gear boxes with lightening quick shifting and acceleration. Add to that super human traction control computers, and the cars would allow the drivers to go way faster than their mere mortal abilities. Our little V-8 car  with a third of the horsepower had no driver aids, so going fast was purely reliant on our ability. Threshold breaking on loose off camber turns, or squeezing on the power out of a hairpin at the limit of traction was up to us not to screw things up. There were definitely a couple of times I witnessed a modern Ferrari overcook a turn only to have the traction control save the car. The computers are so fast, I often wondered if the driver even knew how close they came to losing it as they accelerated happily towards the next set of turns. 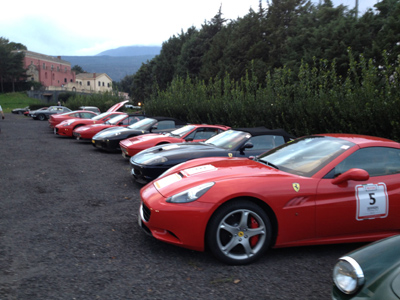 Just as it started to get dark we stopped at a place to regroup. I found out there was still one more stage and a drive into the town of Katania before we could get to the hotel, check in and eat. If this was what they call a half day of rallying, how was I going to survive tomorrow for a whole day?! 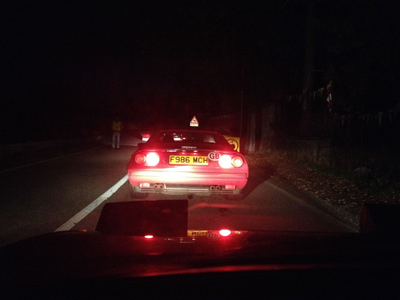 There were timed stages on this rally for better points standings, and one of them was done driving up the mountain roads to Mt Etna, in the dark! Basically, there are set distances you have to drive and complete at set times. The closer you come to the set time measured in hundredths of a second, the less penalty points you will accumulate for the rally. The winners of the rally have the least amount of penalty points from all the trials set up by the organizers. There are usually four or five consecutive timed sections, timed at different intervals from as little as 50 seconds, to longer ones spanning over 5 minutes. The navigator’s job is to time each stage and give the driver countdowns to the finish of each section. The driver’s job is to get the car to the finish point of each section so the tires roll over the timing equipment at precisely the time the navigator says. Each section is timed as if the car were traveling at approximately 39km/hr through the whole section, but acceleration, deceleration, and cornering are not factored in. It’s the skill of the driver and co-pilot to complete the section as close to the prescribed time as possible. 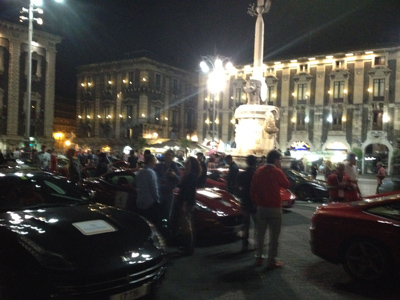 After coming down from Mount Etna, we stopped in a Piazza del Duomo. The town square was lit up and lined with people from Katania. After a short stop, we headed to our hotel for check in, a meal, and well deserved night sleep!