Low Oil Pressure on a 330GT 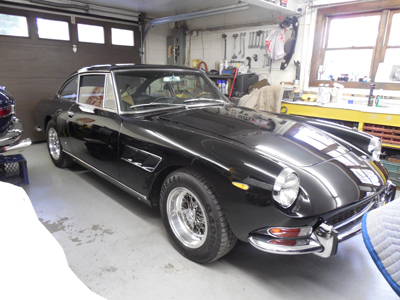 We had nice 330GT come back to the shop last week. This car belongs to a relatively new owner and was with us in the Spring for some repairs on the cooling system. It was back for some more things that needed to be addressed. 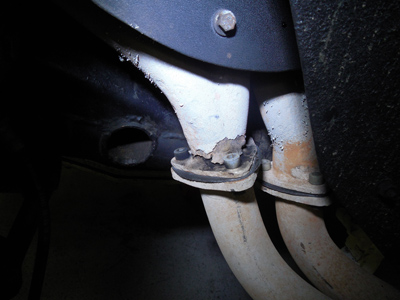 When the owner first pulled up to drop off his car, I noticed it was a little loud and suspected there was something wrong with the exhaust system. Ferraris are normally a little louder that other cars, but the frequencies I was hearing were not good ones. Looking at the header pipe proved I was right. One of the flanges on the header had cracked and the cause for all the racket. 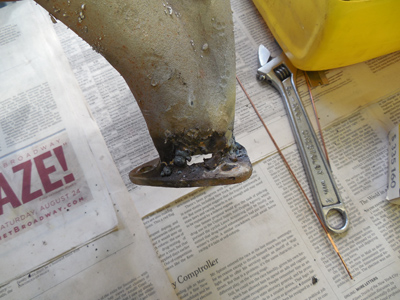 After pulling off the exhaust, we could see a previous repair did not hold. 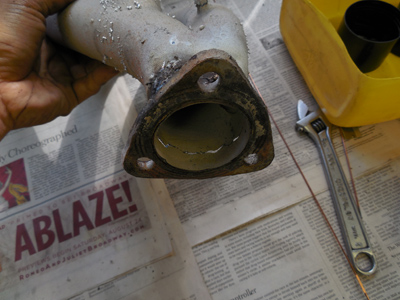 The steel around the header flange was very thin and was very close to cracking all the way through. We tacked the flange together to insure it would stay aligned before separating it from the other pipes, and now it could be re-welded and made leak free. 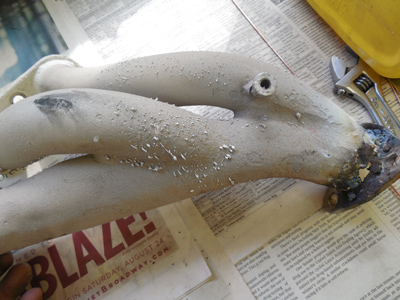 These header pipes were coated with an aluminum coating to protect them. It was popular method of rustproofing steel exhaust headers, but I’ve been using a more modern ceramic coating like Jet-Hot. The Aluminum coating seems to last well, but tends to bead up from high heat as you can see from this picture. The ceramic coating also looks closer to the stock black paint Ferrari painted their headers. 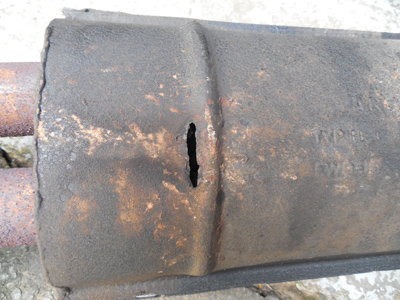 Looking at the rest of the exhaust, I found a couple more holes on one of the mufflers. The mild steel ANSA system was showing the classic syndrome of rusting from the inside out. We’ll try to patch these holes with some welds and it’ll probably last for a couple more years, but eventually more holes will follow. 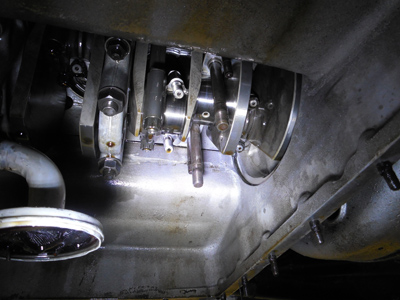 One of my biggest concerns with this car was the low oil pressure we saw on the engine when it got up to operating temperature. The current owner brought us the car about 6 months ago with some cooling issues and couldn’t really drive his newly acquired car without overheating in traffic. Once we solved the cooling issues and drove the car a little bit, we noticed the oil pressure dropping off to nearly nothing at idle, recovering only slightly when increasing the revs. The history on this car was it was restored not too long ago including an engine rebuild by and an unknown shop There were a box of old valves, rings and bearings to support this claim, but the drop in oil pressure pointed to something wrong inside the engine. Our suggestion was to drop the bottom of the oil pan and take a peek at a couple of main and rod bearings to inspect their condition to make sure damage wasn’t being inflicted on these parts from the Low Oil Pressure. 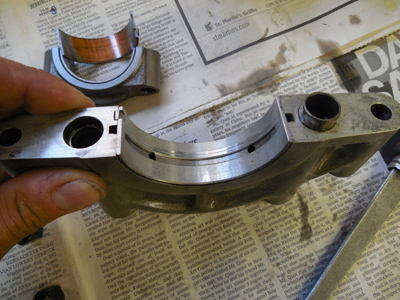 You cannot remove all the main bearing caps on a Ferrari V-12 with the engine still in the car, but you can get to enough to get a general idea of the health of the engine. There was some scoring of the first main bearing cap I removed, and it was probably from some dirt in the oil. The wear on the bearing was a little uneven, but right on the margin of acceptability. When we checked a rod bearing, it was different story. 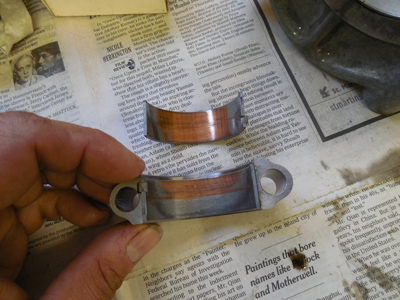 The soft white metal of the bearing surface had worn completely away exposing the copper bearing shell of the rod bearing. The LOP allowed these surfaces to wear exponentially, destroying the soft bearing surface that keeps things spinning smoothly. The copper surface that was now in contact with the crankshaft would create more friction eventually causing the bearing to seize, or spin in the journal. Enough heat on these surfaces could have caused a rod to overheat and break causing even more damage. Seeing this one bearing surface was enough for Francois to tell me to stop all work and inform the owner his engine was done.

With wear like this, continuing to use this engine would only bring bigger problems. The only real choice for the owner was to pull the engine and prepare for an engine rebuild. There are signs some of the parts were surfaced to gain some better clearances on the new main bearings, but looking through the box of old parts, I found the old main bearings, but no rod bearings. Could this engine have been rebuilt before without changing out the rod bearings? Whatever the case, the wear patterns on the rod bearings showed uneven wear, so they will have to be machined square, and sized for new bearing shells. Seeing possible short cuts on this engine makes us want to check and measure everything during our rebuild. We hope to salvage some of the previous rebuild like the new valves, seats, and guides, but not after a close inspection and assessment.