Since we’re on the topic of Ferrari detailing, Parker Hall sent me the latest on his research and approach to detailing the valve stems on 50s and 60s Ferraris. I’ll add this to my “Restoration Tips” section so you’ll be able to refer to it in the future. Thanks Parker!

In the period from the late 1950’s through the late 1960’s Ferrari used Pirelli tires which were equipped with a metal sleeve covering the innertube nipple, along with a knurled nut to retain the sleeve and the normal knurled metal cap that was common at the time. These three pieces were found on the Borrani wire wheels as well as the cast alloy wheels that were used on the 275’s and 330’s and later cars. These pieces were used on the Pirelli tires and tubes, but were not used on the Dunlop, Michelin or Firestone tires that were also supplied on the Ferraris.
In 1980 I had a flat tire on my old 250 Cabriolet that was caused by using a non-radial innertube in the old Pirelli Cinturato tires. I replaced the “original?” Pirelli tires with new Michelins and in the process found that the old steel sleeves would not fit the Michelin tubes. Hence the sleeves and knurled retaining nuts were added to the box of “extra” Ferrari bits. In 1988 Bobby Smith restored, and showed at Pebble Beach, the beautiful 250 Ferrari P.F. Spyder #0737. Bobby had made a set of sleeves and knurled retaining nuts to replace the now rusty and damaged original pieces. Since that time most of the restored Ferraris cars of that period have been shown with similar pieces.
The Problem
Michelin tubes are the choice among the U.S. restoration shops. They are designed for radial tires and have a lap splice. Michelin invented radial tires and they have a reputation for consistency and quality. The new Michelin tubes have a slightly longer tube nipple and a slightly shorter threaded section. Therefore, to cover the whole length of the nipple and to seat properly in the wheel, the replacement sleeves are considerably longer that the original pieces. They simply look a little awkward and non-original. In addition to looking strange, the short threaded section means that the retaining nuts have to be removed to check the tire pressure or to inflate the tires and the caps will not seat properly on the tube nipples. This is not a big problem for street use, but is likely to be judged as a defect on show cars. 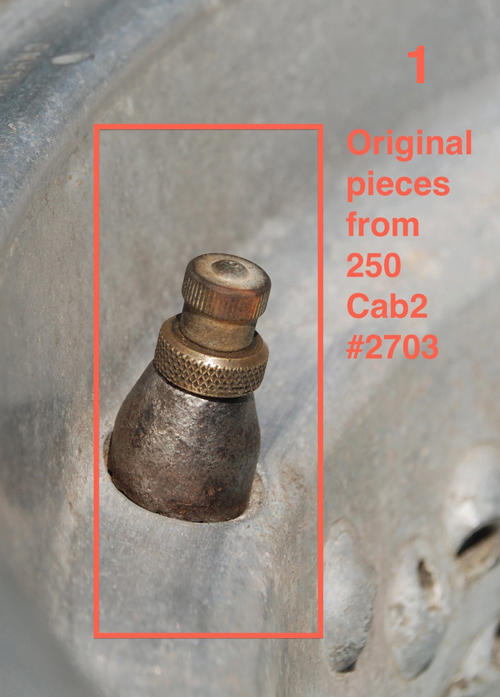 The photos show the original pieces assembled as they would have been seen on a car in the late 1950’s, 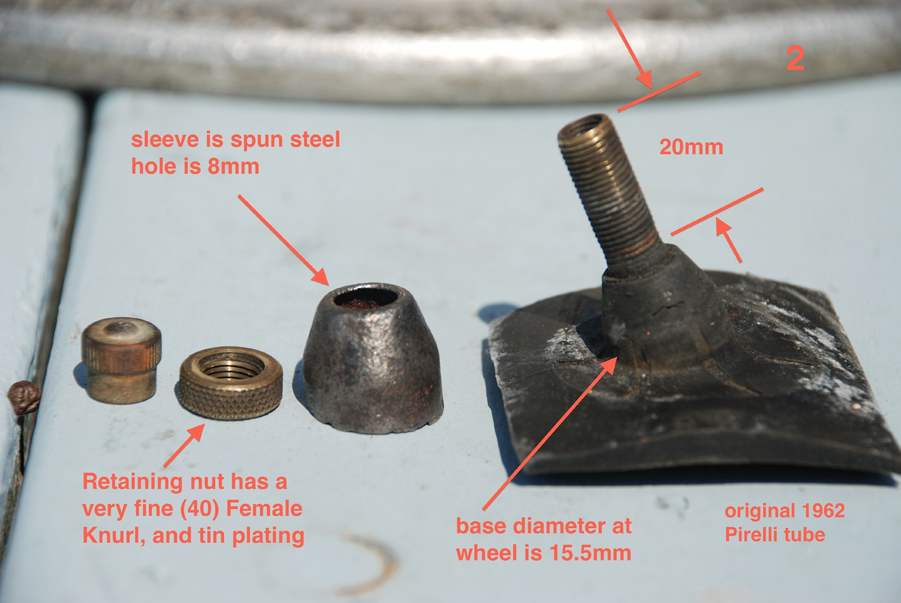 the individual original pieces with the innertube nipple supplied by Pirelli, 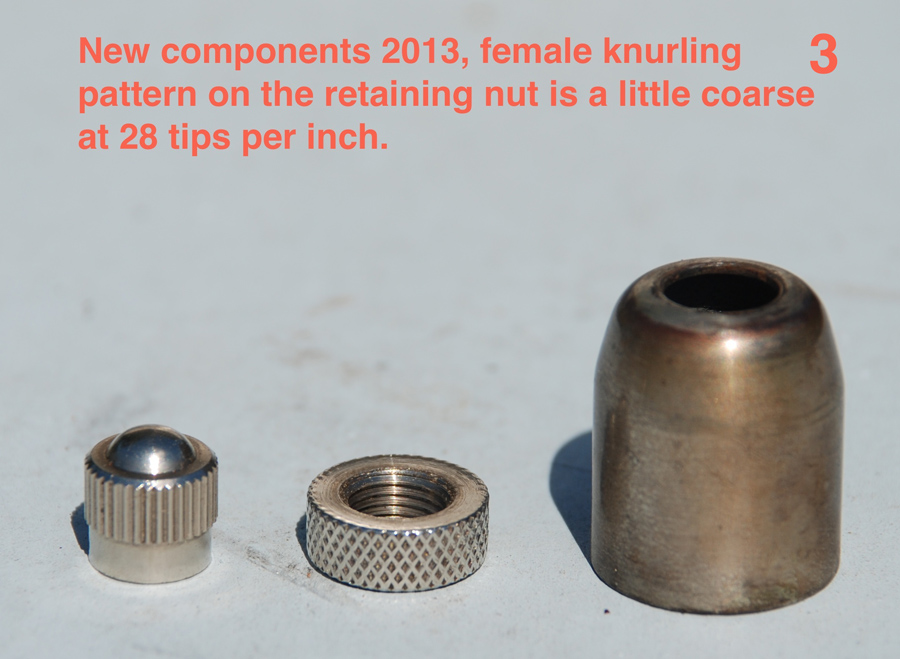 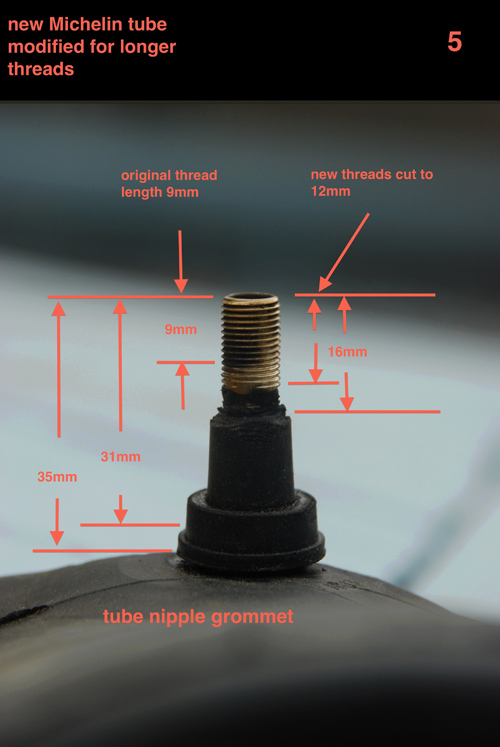 I believe that the following set of modifications and pieces will be a solution to the problem. The new Michelin tubes can be modified as shown in photo #5. This requires removing 5 mm of the rubber covering over the brass section below the existing threads, then rethreading this section to extend the threads to 16 mm long. I used a Dremel tool with part #115 “high speed cutter” to reduce the diameter of the exposed brass section. The die for cutting the threads is for Schrader valves, 0.307”x 32 threads per inch. It is available from “e-taps.com.” as part # “8v1-32 Schrader valve.” E-Taps phone is 321-953-3373, E-mail is sales@e-taps.com.   The piece shown in print #5 is my first try. The results looked a lot better by using a Ridgid tubing cutter to make the initial cut cleaner. 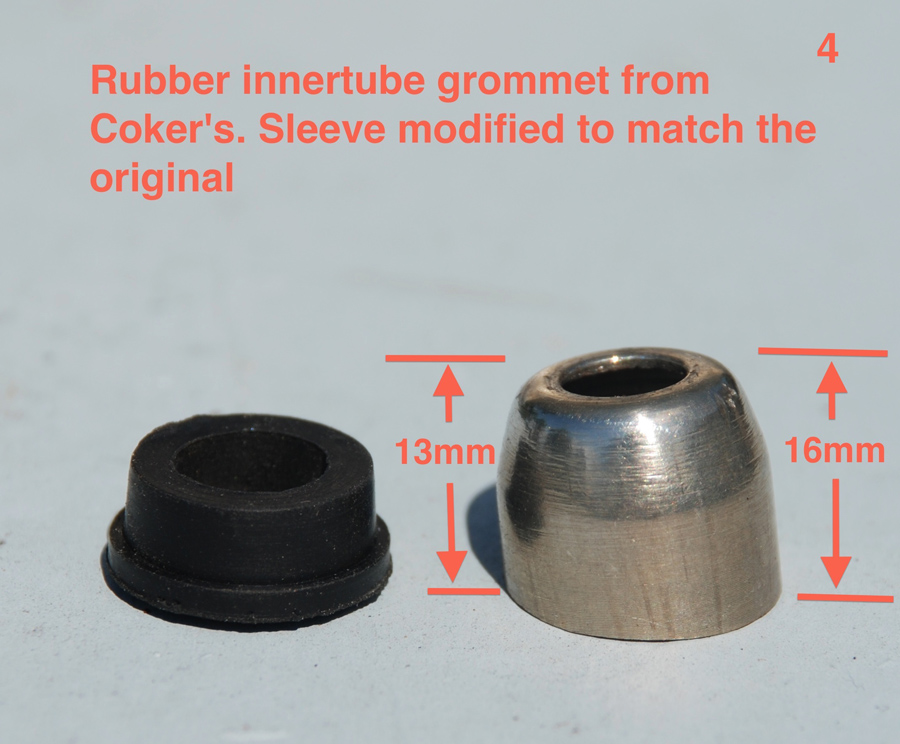 The second element in the cure is to use an innertube nipple grommet. The grommets are designed to close the hole in the wheel to match the smaller outside diameter of the nipple on the current supply of innertubes. The grommets will also reduce the length of the innertube nipple as it extends from the outside of the wheel rim. The grommets are available from Coker Tire Company at 423-265-6368, as part #“95002Grommet.”
The third element is the sleeve. The sleeves are supplied over-length so they can be cut to allow for variations in the tube nipple lengths from other manufacturers. Besides Michelin, innertubes may be available in other countries or from other suppliers. The sleeves are 21.5 mm long as supplied. To match the originals, they should be cut to 16 mm on the long side and gradually tapered to 13 mm on the short side, as shown in photo #4.
I hope that this suggestion will help in replicating an original look to the current group of wheels and tires. 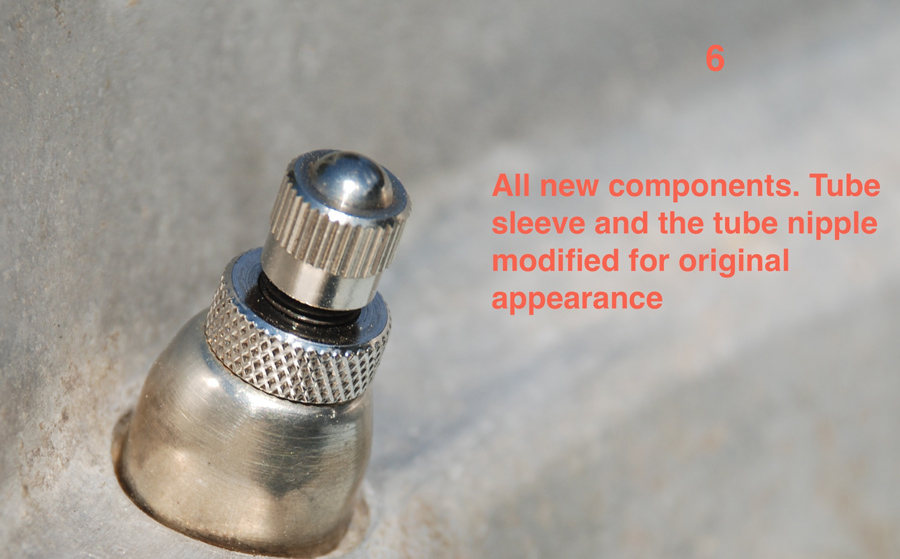