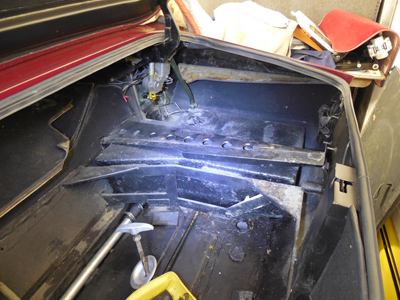 I’ve been trying to repair some fuel leaks on a 365GT 2+2 we have at the shop, and I just can’t seem to win. My motto is “easy things first,” but sometimes it doesn’t work out that way. This car came in our shop with a fuel leak. On inspection, I found fuel leaking from the soft rubber fuel hoses that connected the two tanks together, and felt that was the most common and obvious place to start looking. Leaks of any fluid in the car can sometime be hard to find because it works its way to the lowest point of the car, and then gets blown around when the car is driven. Sometimes we have to thoroughly clean the area dry and wait for the leaks to reappear to find the tricky ones.

Always one to avoid excessive work for no reason, I didn’t think there was a need to pull the fuel tanks since the leak was probably from the bridge pipes, so I drained the 2 or three gallons of fuel out of the tanks, pulled the bridge pipes out, changed the old and cracked hoses, and refilled the system. I filled the system with about 5 gallons of fuel to check for leaks, and found everything bone dry. Proud of my diagnosis, I thought we solved the fuel leak issue without delving further into the fuel system. I added more fuel to create some head pressure to prime the fuel system, and that’s when I started smelling fuel again!

In a couple of days of sitting, with about 8 gallons of fuel in the tank, I found new leaks forming on the right side of the trunk. The bridge pipes with the hoses were dry, but now the padding under the tanks were wet! All the signs were pointing to a leak somewhere from the right tank, and pulling it out for inspection was the only solution. I would have to now drain the tank again, take out the new soft hoses I installed, and move onto removing the tank. I hate doing things twice, but I tried to save on time and lost! Sometimes I feel if I went into this job expecting to take the tank out without definitive proof of a leaky tank, it would have seemed irresponsible. Whatever the case, I was going to smell like gasoline again! 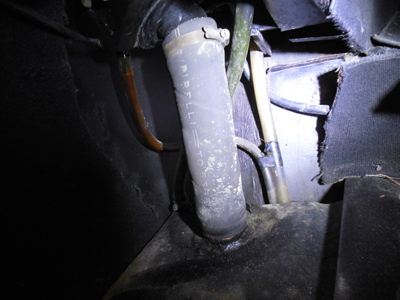 Looking at the left tank, I found the original fuel filler hose with the Pirelli stamp still on the hose. I think this was a good time to replace a 45 year old hose! 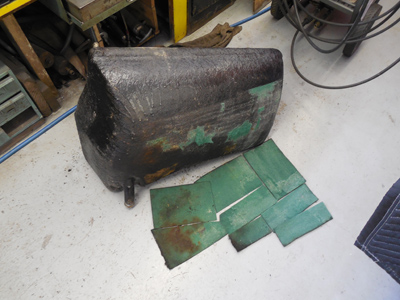 I decided to pull both tanks since it was only going to be an extra hour to pull the second tank to have it pressure tested instead of finding a problem when everything was put back together. I pulled the padding off the bottom of the tank and photographed it so it could be reinstalled after the leak was fixed. 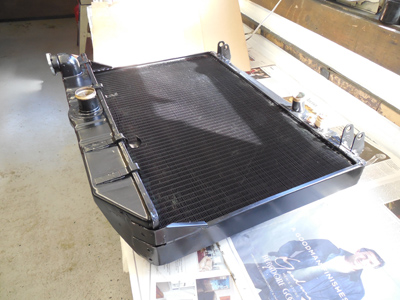 The radiator is back from the radiator shop. A new core was installed and a fresh coat of paint was applied. We’re at least moving forward with the cooling system on this car!