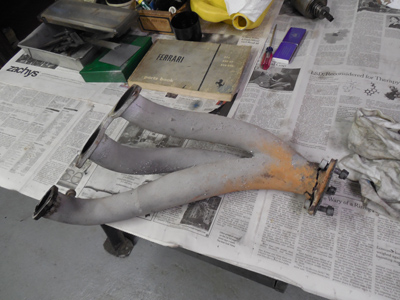 On top of trying to get this 330 engine assembled, and running in a few short weeks, I’ve got some added repairs that need to be addressed on this car. One of them is to repair the one of the exhaust manifolds. 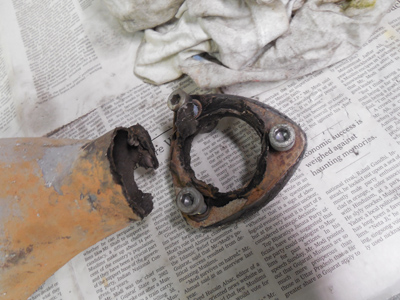 The flange on one of the manifolds was repaired previously with brazing and it had cracked and failed. I have a new flange on the way, and I will have to cut and weld some new metal and try to repair this header. I needed the heads and the y-pipe to mount this header as the pieces are welded in place or else nothing will fit when it is bolted to the car. It would have been nice to have done this job weeks ago, but impossible with the engine parts at the machine shop! 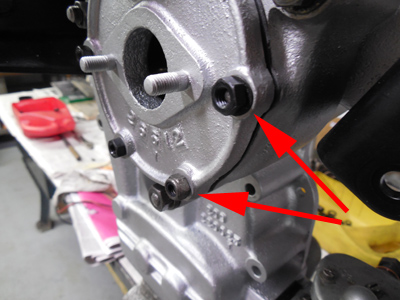 Some of the fasteners on this engine were incorrect, and now was the time to install the right ones. The incorrect nuts were nylocks that I replaced with a wave washers and black oxide nuts securing the water pump in place. Cad plated acorn nuts are on order for the valve covers and thermostat housing. 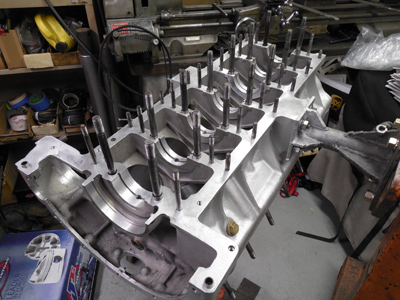 I installed the main bearings and crankshaft and checked the end play clearance. 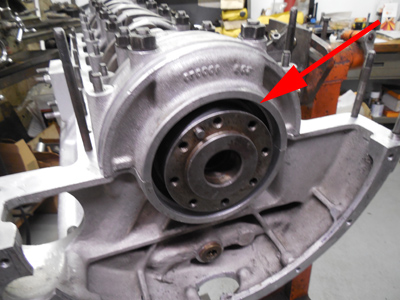 After all the main bearing caps were torqued down, and I was satisfied with the “feel” of the crank turning in the saddles, I turned my attention to the rear main seal. 330 engines have a modern lip seal installed from the factory, but when I inserted the new seal in place, I found a problem. As I torqued down the rear bearing cap, the seal started to get pushed out of position!? I checked the installation, and found nothing outwardly wrong. Since we didn’t machine this clearance, and there was a seal installed, we assumed there wouldn’t be a problem, but something was wrong. 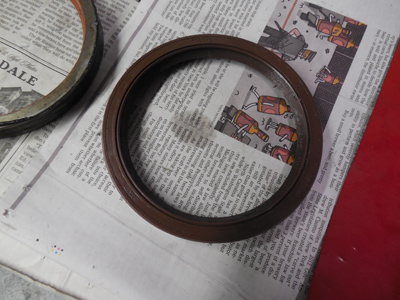 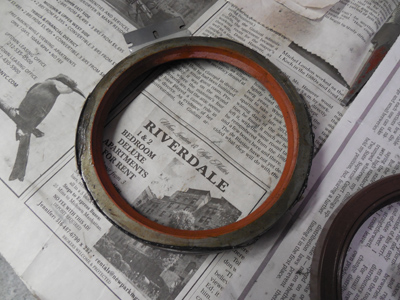 I went into the box of parts that came off this engine and inspected the old oil seal and found out how the previous shop made it fit. The shop removed all the rubber off the old seal leaving just the lip to seal the crankshaft. After they surface ground the main bearing caps, they changed the dimensions of the oil seal, but discovered this error the same time I did in the assembly process. Their solution was to doctor the seal to make it fit, but I was not comfortable with this solution. The extra millimeter we saw in the new seal could affect the rear bearing clearances, and the seal could squeeze out from the smaller space, causing a major oil leak. We had no choice but to fix it right. 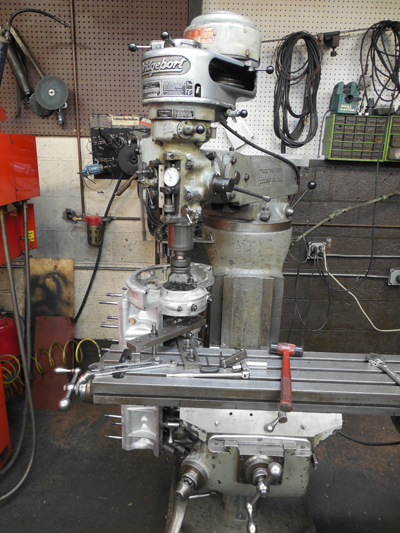 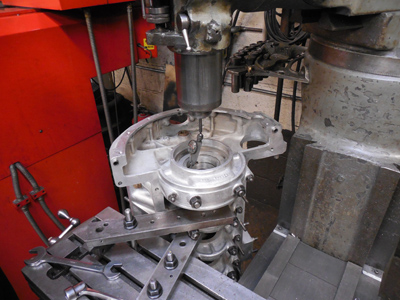 After mounting the block to the Bridgeport Milling Machine, Charlie took some measurements of the opening for the seal. The clearance was definitely too small, so he prepared to cut the opening larger to accept the oil seal. He explained that the previous machine shop removed material from each bearing cap so they could re machine the bore of the block for the crank, but must have made a mistake on the size they cut for the crank seal. Whatever the case, we were correcting the problem so everything will fit the way it was intended. 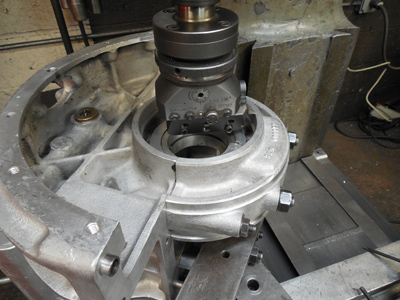 With the new seal opening cut, my problem was solved within 18 hours of its discovery, so I rushed the parts back to the shop to get back on schedule. Whew! Thanks Charlie!

I spoke to Richard Garre this week about our upcoming Car Show in May, and as always it’s going to be a lot of fun. We’ve had a long cold and snowy winter on the East Coast, and we’re all looking forward to getting the cars out for one of the first car shows of the season! David Wheeler, a fellow 330GT owner, has been calling out to all the 330GT owners to attend this show to celebrate the 50th Anniversary of the introduction of the 330GT, and his list is getting longer. I hope to bring my 330 America down to join in the festivities. Kerry Chesbro, the keeper of the 330 GT Registry, is even coming all the way from Seattle! 330GTs will not be the only attraction was there will be plenty of Vintage Ferraris to look at as well as other interesting European Sports cars. The variety is always astounding.  Space is limited for show cars, so call or email Richard at Radcliffe Motorcars as soon as you can to reserve a space. Details are below!
Save the Date! The 7th Annual Radcliffe/Tomyang.net Spring Car Show Saturday May 3rd 2014 celebrating the 50th Anniversary of the Introduction of the 330GT!
Spectators are free, but Registration of show cars are limited for a small fee. Details can be found on the Radcliffe Website.
You can also Richard Garre at:
Radcliffe Motorcars
12340 Owings Mills Boulevard
Reisterstown, Maryland 21136
Phone: 410-517-1681