My Friend Frank Botti who owns a 330 America called me to hitch a ride to the Radcliffe Motorcar/Tomyang.net Spring Car show. He knew I was driving my car down to Maryland, and we both thought it was a good idea to drive down together. Frank is a commercial airline pilot, and could practically fly anywhere to meet me so we chose an airport near my home so I could pick him up along my route south. Unfortunately, a large low pressure system came across the Eastern United States, fouling up travel for everyone. Frank got stranded in Philadelphia with no available hotels, and was thinking about heading home until I talked him into staying and waiting for me to drive through Philly the next day, 2 hours further south than our original meeting place.

When I got into my car for the 3-1/2 hour drive to Philly in the Ferrari, the rain was still falling pretty hard, but I knew it would be clearing soon so I pushed through. I drove about 80 miles into New Jersey, fueled up, and sent a text message to Frank to tell him I was 90 minutes away and the car was running great! 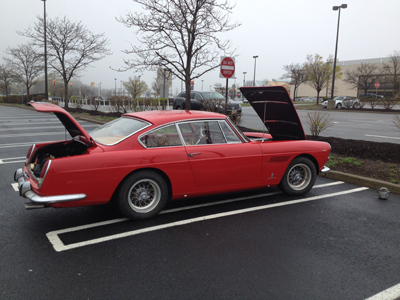 I definitely spoke too soon because sitting in some light traffic 19 miles after my text message, I heard a horrible screeching noise coming from under the hood and the car stalled out. I restarted the car, but the screeching noise was still there, so I quickly pulled over and coasted into the parking lot of shopping mall in Paramus NJ. 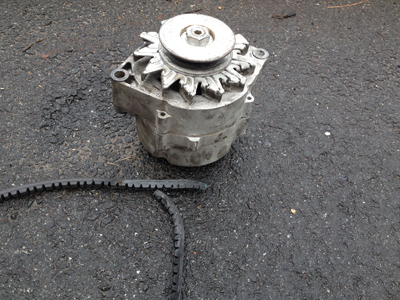 It didn’t take long to find a broken fan belt and an alternator with a seized bearing. I sat in my broken Ferrari with my mind reeling with what to do. I was 90 miles from home, 145 miles from Radcliffe Motorcars, and 90 miles from Frank waiting to be picked up at the airport. The easiest thing would have been to give up and head home on the back of tow truck, but I had too many people depending on me. Besides, if I couldn’t fix a Ferrari on the side of the road, who could? I had to give it a try.

Leaving my car in a NJ parking lot was not in any option, so I immediately called AAA, which I pay for a Gold Membership. This membership offers 100 miles of free towing and has paid for itself many times over. They said they would have a flat bed out in about 90 minutes, so I passed the time by removing the broken alternator. Luckily, I was vaguely familiar with the area I was stranded in NJ, so I called a large auto parts store a couple of towns over to see if they had a replacement alternator. My car had an old 37 amp American alternator instead of the original generator, so I had a better, albeit slim, chance of finding a replacement. The parts guy on the phone told me he would only be able to help if he could see the alternator.

As the tow truck driver circled around the block with my car, I triumphantly exited United Motors with an exact replacement for my broken alternator in my hand and it only cost me $60 bucks plus the exchange! I jumped in the truck and asked the driver to turn down a side street to find a place to fix my car. 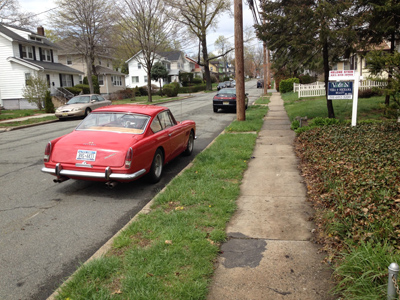 My mother used to live in this county, and I once had a neighbor call the police because they didn’t like seeing me change the oil on my car in the street, so I knew how touchy Suburban people can be! I found an empty house with a “for sale” sign out front, and asked the truck driver to leave my car right in front and in 20 minutes, I was back in business! I’m sure Frank was as happy to see my Ferrari at the Philadelphia Airport as I was to have fixed my car against all the odds!