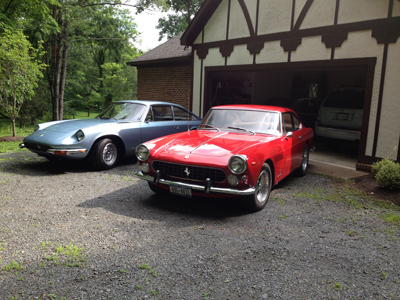 I left my 330 America in Maryland after the Radcliffe/Tomyang.net event in May so I could attend the Ferrari Club of America National meet in Leesburg, VA in June. I met Mark Dempsey with his 365GT 2+2 and even found time to wash my car before the show. 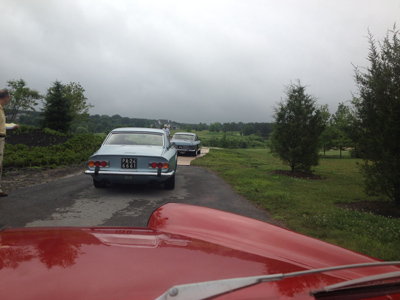 The Concours was held at Creighton Farms, in Aldie Virginia, but the weather was not really cooperating. The night before the show, a torrential downpour soaked the golf course, so access the next morning was tenuous. Ferraris may have been meant to be driven, but not so much on mud. The organizers did a good job laying down 4X8 boards to provide some stable dry footing. 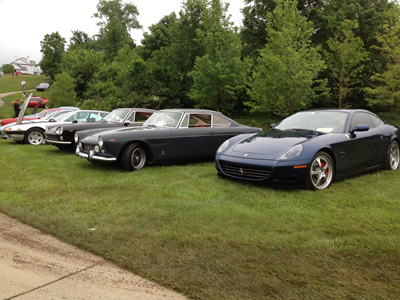 The 2+2 class was probably the largest I’ve seen at a National event in years. Practically all the examples of the 2+2 from the GTE to the 612 were represented. 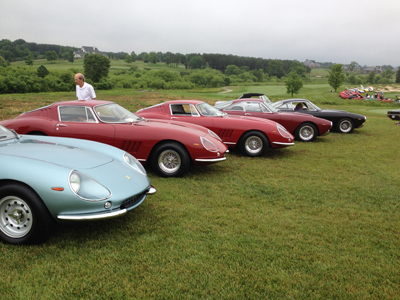 There was a nice selection of 2 seaters as well, but not as many as I would have expected.

The rain held off until after lunch, but when it came, it came in torrents. At first we all decided to wait out the rain, but all the weather radar reports showed a dark nasty band of weather that wasn’t going away anytime soon. The first priority was to move the cars off the water soaked lawn to a parking lot with more drainage. My car started and escaped the soggy grass, but what to do next? We were all soaked to the bone, and far away from a change of clothing and our hotels. We could try waiting it out, but rush hour traffic later in the afternoon could be that much worse with the anticipated flooding. I chose to leave during the rain hoping to get back before the roads got too flooded. WRONG, MOVE!

The road leaving the Golf Course was slow going with low visibility from the heavy rain. There were small rivers of water crossing the road, and they were getting deeper and deeper. I tried my best not to cross them too fast, but once I committed to crossing, there was no stopping! Seeing them was getting harder and harder until I hit one puddle with enough of a splash to feel the engine stumble. I kept the revs up and hoped the engine wouldn’t cut out. It felt like I was running on half a bank of cylinders, but I soldiered on. Within 25 yards, another deep puddle did in the other half of the motor. I managed to keep the engine running just long enough to limp out of the water and over to the shoulder when the engine quit and would not start. The rain was still coming down in buckets, and I knew my chances of drying out the ignition was zero with this amount of moisture. I’ve driven my car in all sorts of weather,  and some pretty heavy rain, but this was more than I have ever seen. I was going to need help.

I decided to call AAA and have them get my car out of this mess. The solution was to dry out the ignition system in a dry garage, and not sitting on the side of the road in the rain. After the truck made it to my location in the heavy traffic, I had a pleasant dry ride back to the house. The rain had finally stopped on the ride back, and the Ferrari got a chance to dry out on the back of the truck so much so, she fired up and drove off under her own power! 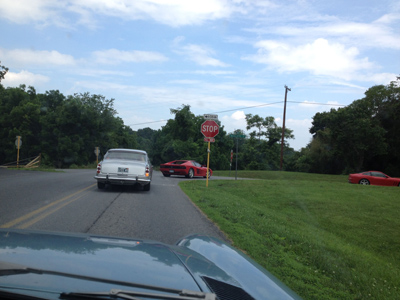 The next day was a scheduled rally. Even though my car was back up and running, I decided to leave it back and ride along with Mark in his 365GT 2+2. It was a pleasant drive out to Summit Point Racetrack with good weather and comfortable temperatures. 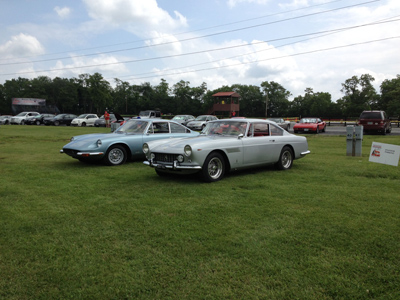 Gary and Suzie Hiniker joined us for the rally in their GTE. She’s running great after leaving our shop a few weeks ago, and it was nice to see the Hinkers enjoying their car again! 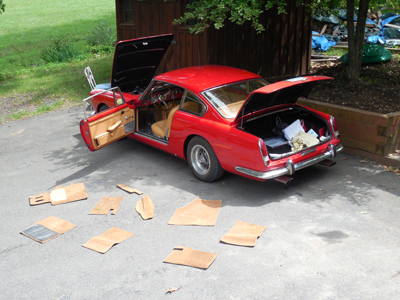 After being away from home for a few days, I was anxious to get home, so I bailed out early to avoid the traffic. The DC metro area has become so congested that the windows of opportunity have become so small to enjoy a good drive. I’m sure the locals have it all figured out, but I was happy to get my old Ferrari out of there! As much as I love driving my car, sitting in any kind of traffic is no fun, especially in a carburetored car. Besides watching the temperature gauge like a hawk, I can hear the carburetors protesting from the fuel evaporating in the heat. I left Virginia early on Saturday morning, and shot straight up I95 without much traffic at all. The 330 America ran great, and when I got home I pulled all the soaked carpets to dry in the sun!