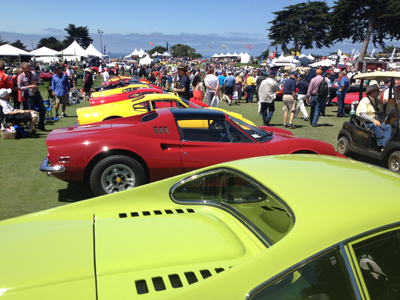 With the sale of Mark’s car behind us, I could finally relax and enjoy the weekend. Concorso this year was on Saturday and I couldn’t think of a better way to kick back and look at some cars. I don’t think I’ve ever seen more Dinos in one place at one time before! 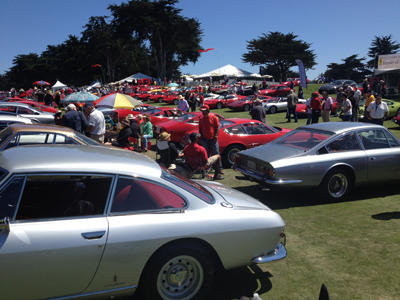 The weather was nice, and the turn out was good. Every year the Vintage Crowd is a little smaller, but I suspect with Maserati and Porsche being a celebrated Marque on the Peninsula this year at Laguan and Pebble Beach, many Ferraris stayed home. Next year for 2015, the Ferrari Club of America is planning their annual meet the week after Monterey Weekend, so I bet a lot of guys are saving up for 2015. 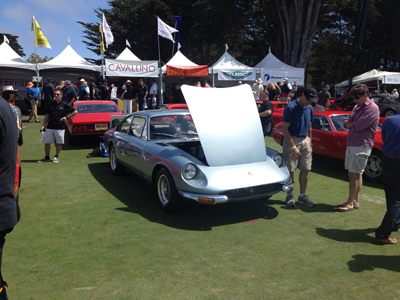 A relative new owner brought his 365GT 2+2 to Concorso, and drove it all the way up from LA. When I went to look at the car, he told me he was having some starting issues and asked if I could take a look. I found a weak battery, but just as the car was going to start, the throttle cable pulled out of its keeper! Robert was concerned he would not be able to drive his car home, but I assured him this was repair was easy and very doable. Luckily his mechanics in LA were supporting other cars during the weekend and got his car running without a problem. I spoke to Robert a few days later, and he was home safe without any incident. This is just another testament that Vintage cars are often far easier to repair when you’re away from home than the modern ones!