365 Fire Prevention and an Oil Plug 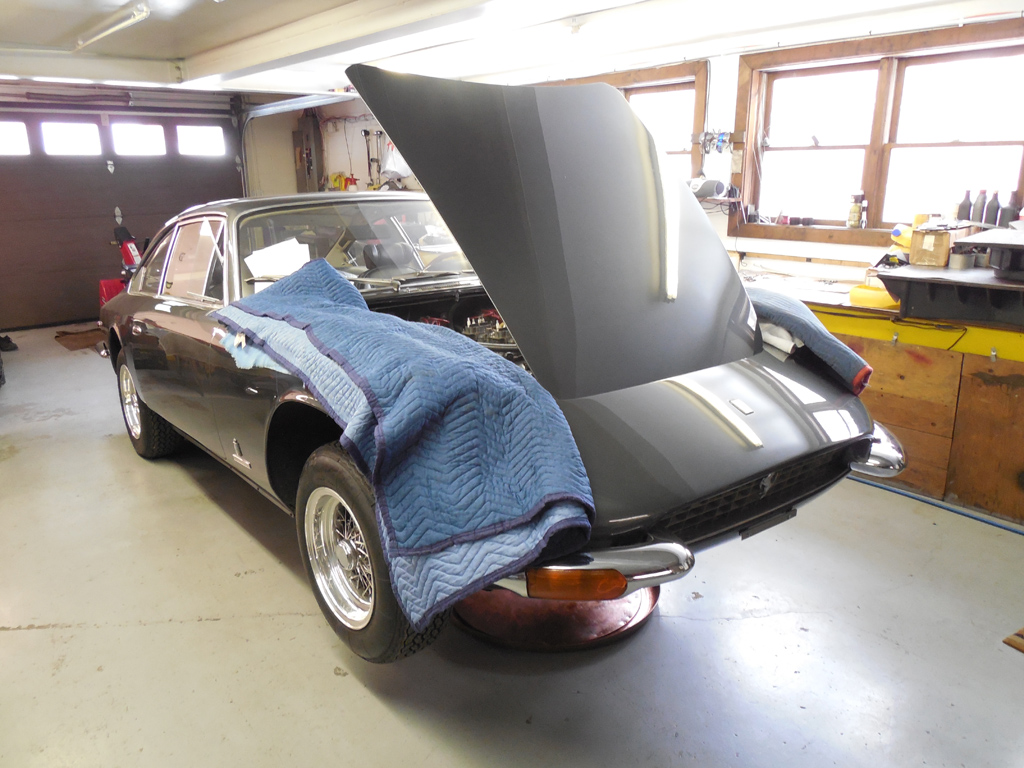 The weather in the Northeast has been miserable. With back to back snowstorms, it’s been difficult to work on Ferraris. I have cars waiting to get in, and the snow has been delaying everything from receiving cars, to getting the UPS truck to deliver parts to the cars I’m workin on! I finally managed to get some time this week to get back in the shop and continue sorting out the 365 at the shop. 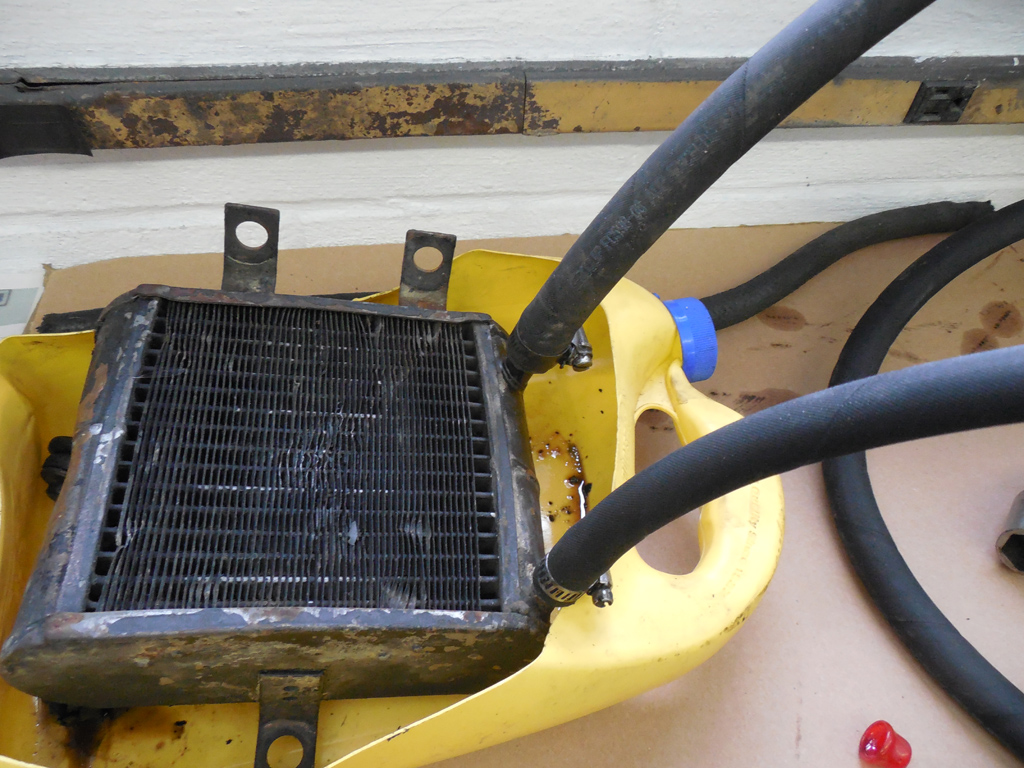 The power steering cooler hoses came in the mail, and I was able to install the new hoses to stop the oil leaks. The original hoses were wrapped in a weaved sheathing, but since this car is not a show car, these hoses will work fine, and probably last longer. 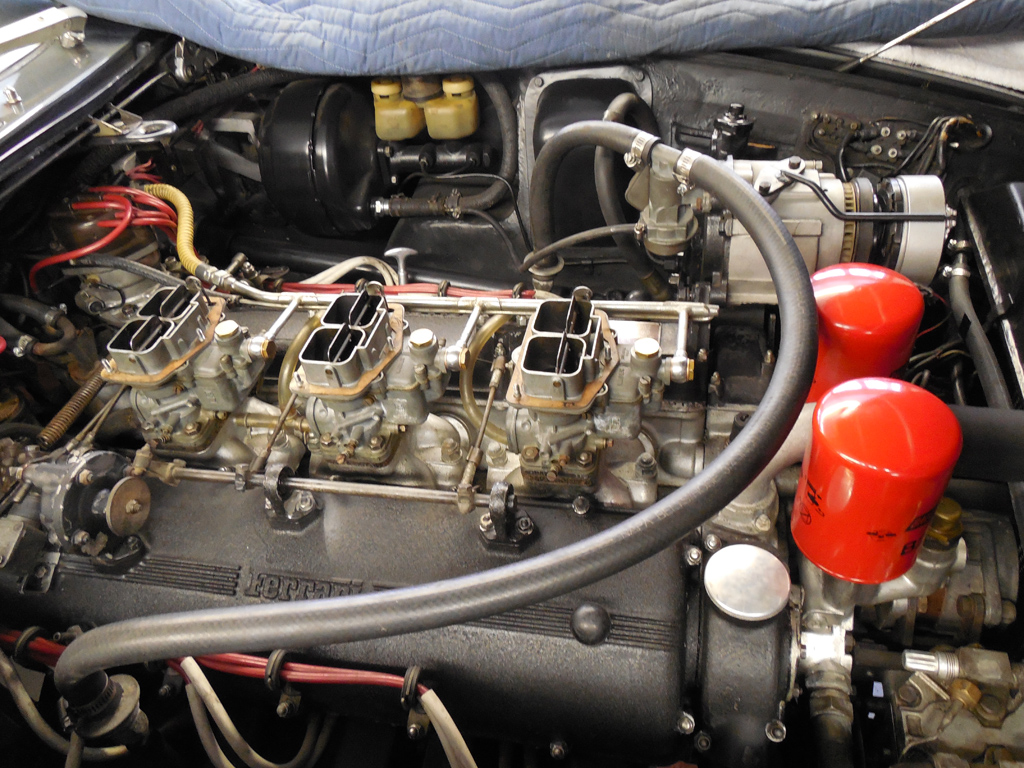 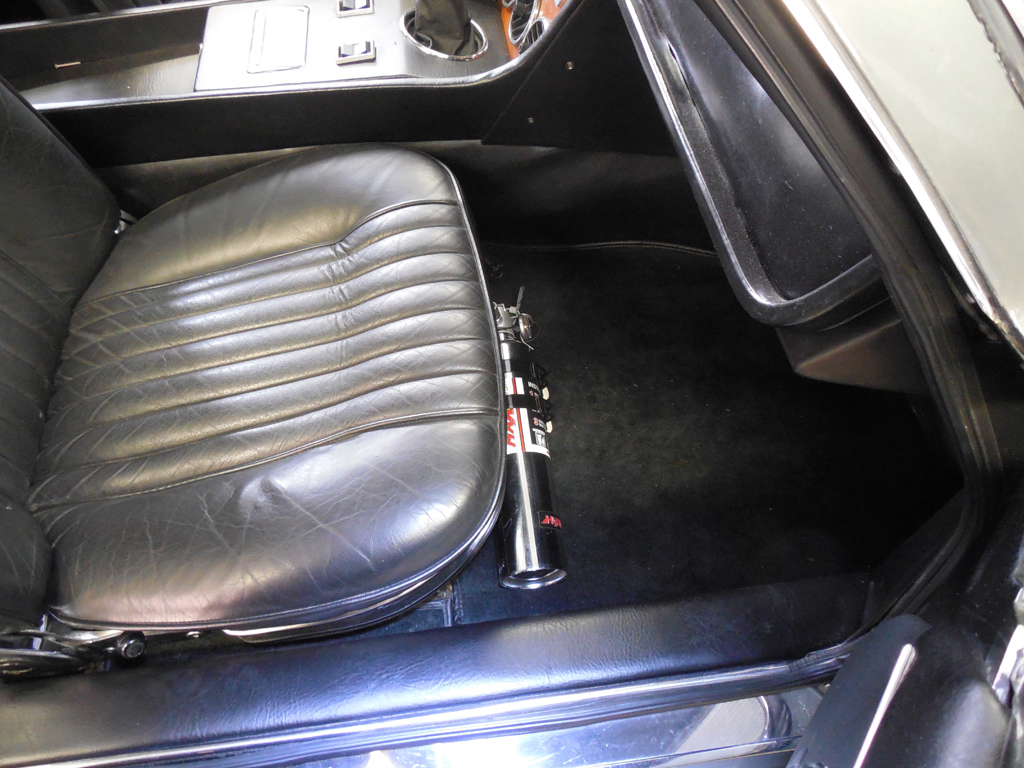 Moving inside the car, I needed to install a fire extinguisher, and I suggested installing a custom bracket so the fire bottle would move along with the passenger seat. If we were to bolt the extinguisher to the floor of the car, it would limit the amount of leg room in the passenger compartment, or obstruct the movement of the seat. 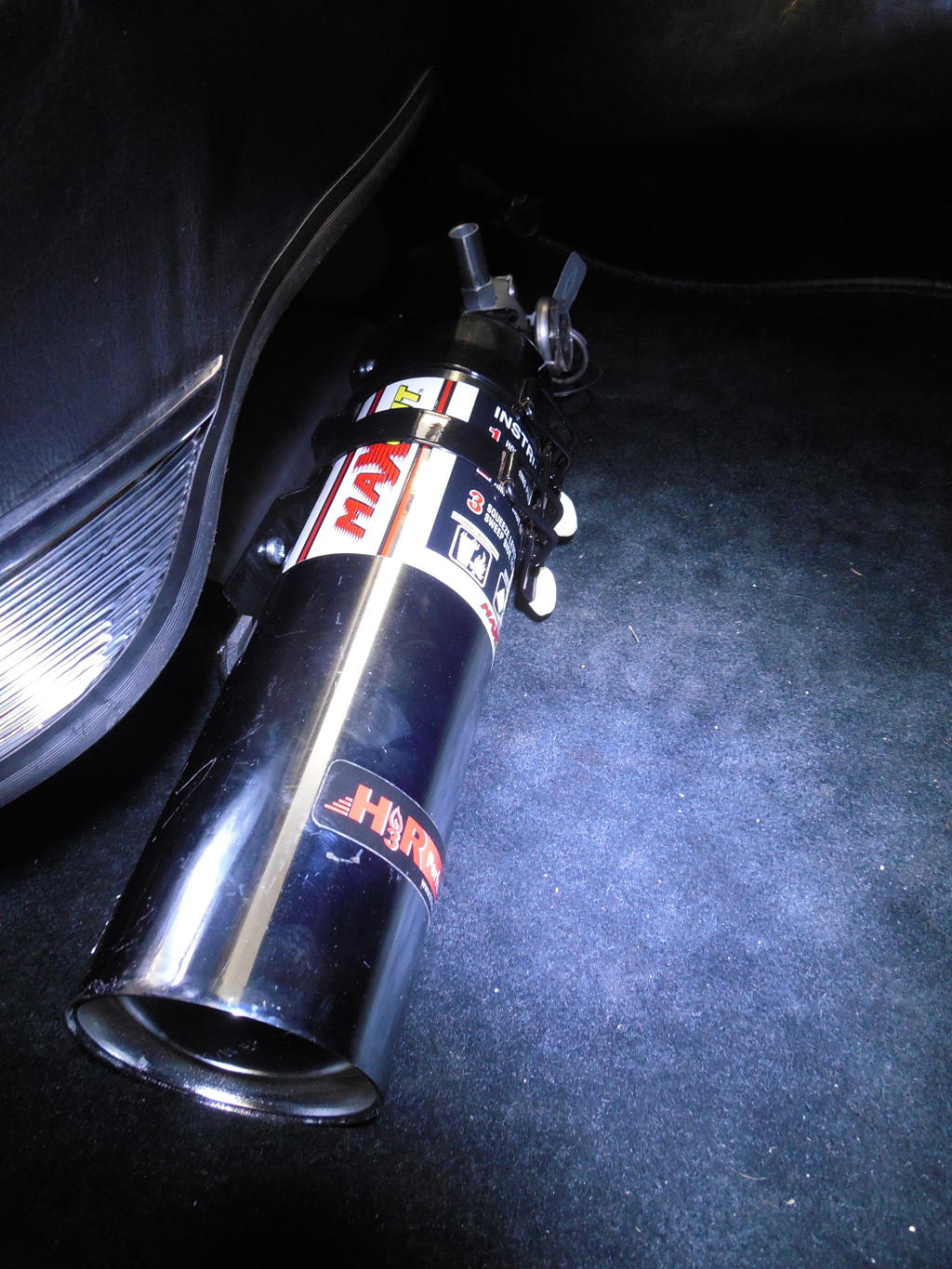 I fabricated a bracket and secured it to the bottom of the seat. Painted black, it hides nicely, and the bottle tucks right under the passenger’s knees.

My customer asked me which type of fire extinguisher he should buy, and I explained my point of view. There are several to choose from but for our purposes, there are two basic types, The Halon (or Halon replacement), and the dry chemical extinguisher. Since I volunteer at my local fire department, I learned a little bit about fighting fires, and if there is ever a reason to use an extinguisher, your first concern would be to put out a fire for the safety of everyone. The Halon extinguishers make less of a mess, but they are not as effective at putting out an automotive fire like a dry chemcial. I have both types of extinguishers in my various cars, but I gaurentee if I were in a situation where I needed to extinguish a fire and I had a choice, I would grab the dry chemical! 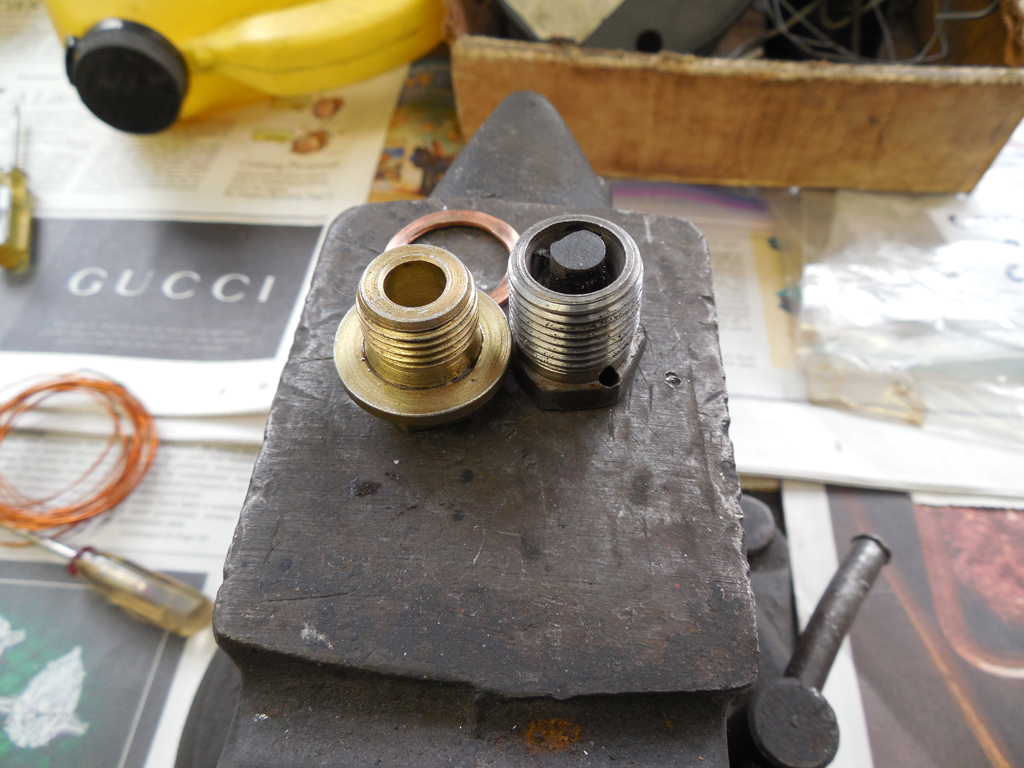 When I pulled the drain plug on the 365 engine, I found it was not stock (right), and wasn’t even doing a good job sealing the sump. The easy fix would have been to install a stock drain plug (left), but it was one size smaller than the one I took out. 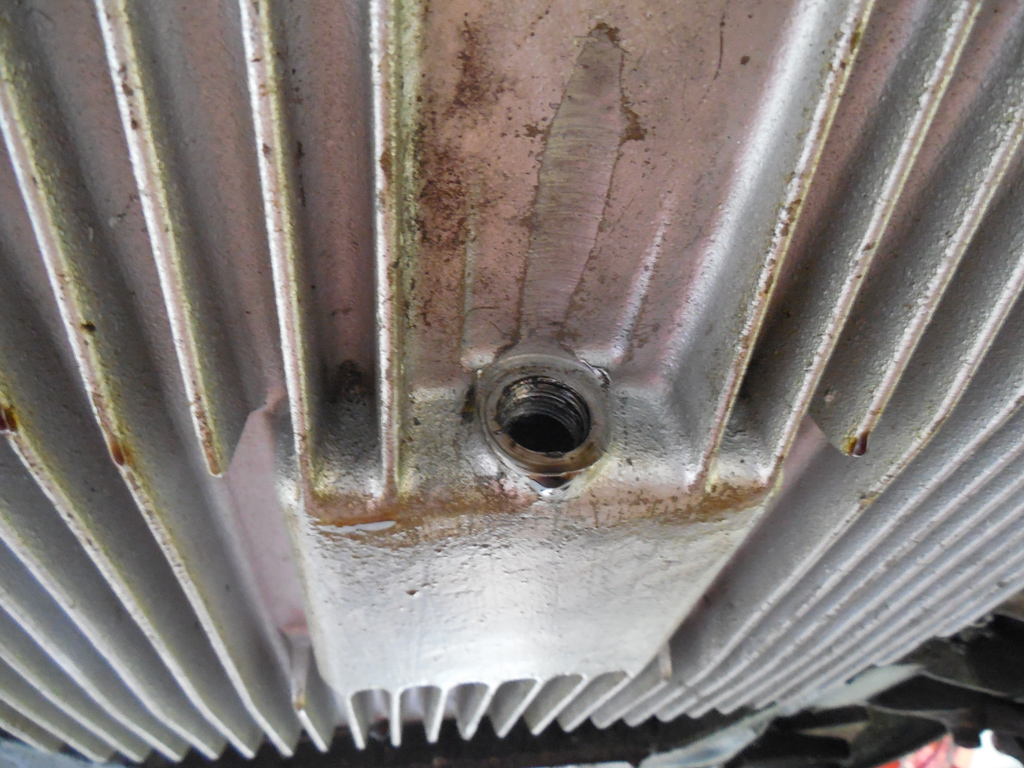 Looking at the bottom of the oil pan, I could see someone had drilled and tapped the drain hole to the next larger size. I had a couple of options to fix this problem. I could drop the oil pan, have the hole welded, drilled, and tapped back to the stock size, or I could simply go to the autoparts store and buy a 18mmX1.5 pitch drain plug. 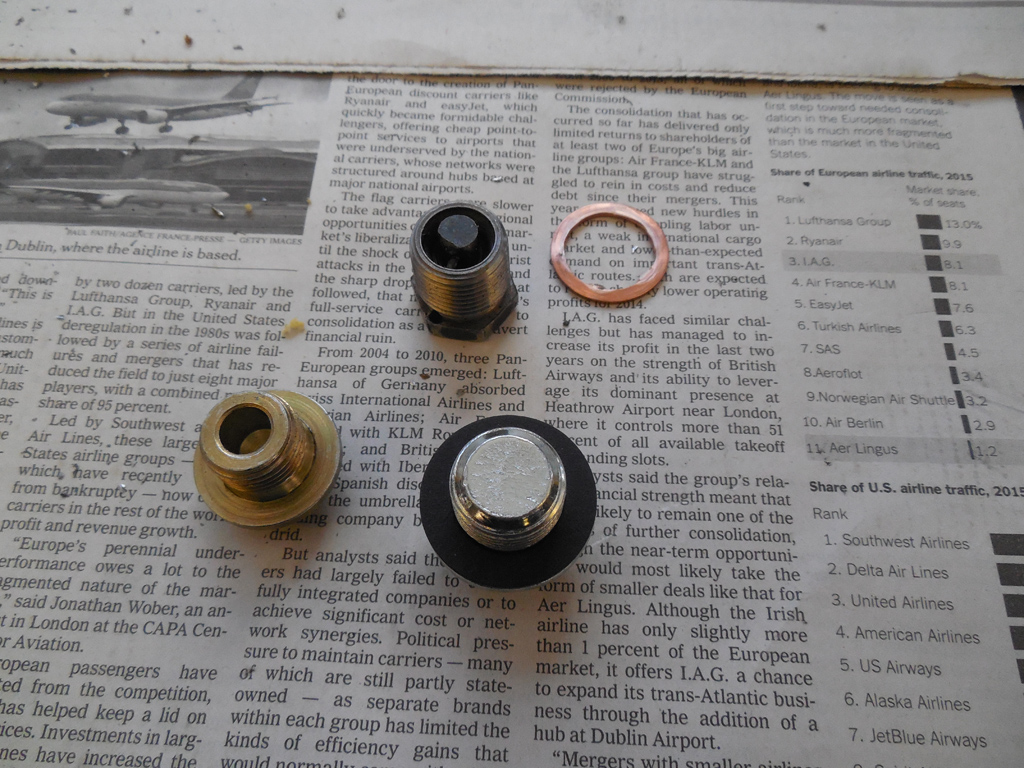 Buying a ready made plug was the cheapest and easiest thing to do, so but I soon found out it wasn’t going to be that easy! If you look at the way the larger hole was drilled to the next larger size in the oil pan, there was less clearance for the shoulder of the new plug. 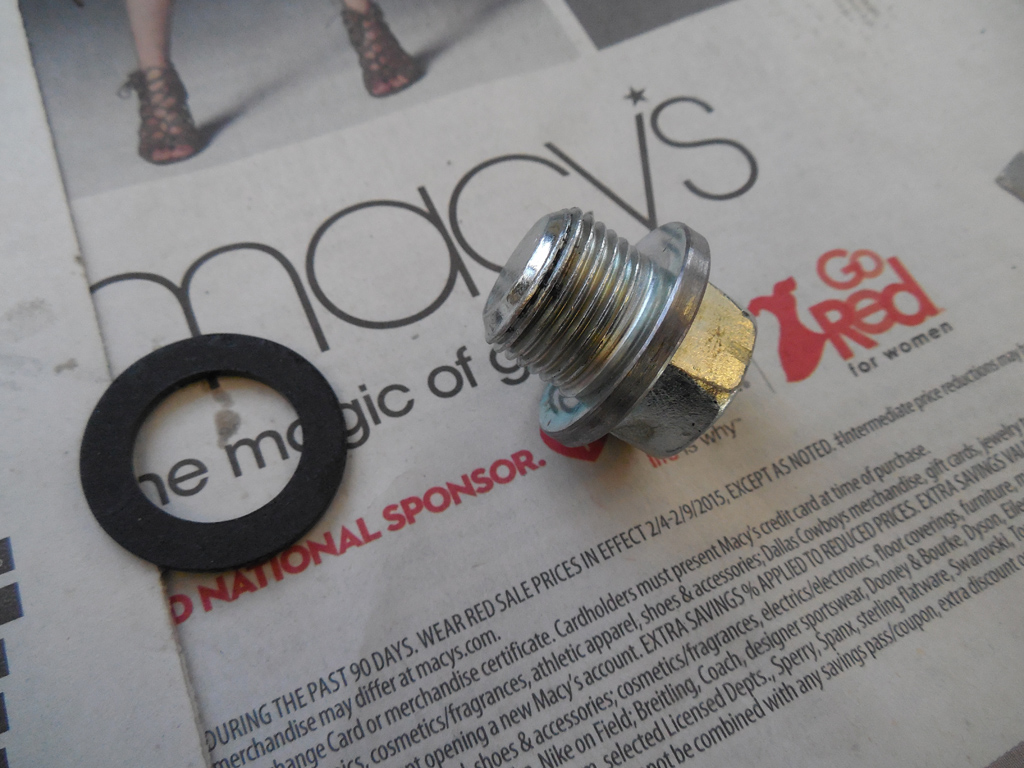 After a couple of minutes on a lathe, the oil plug was turned down to clear the oil pan. The narrower plug along with a smaller gasket, and the problem was solved.