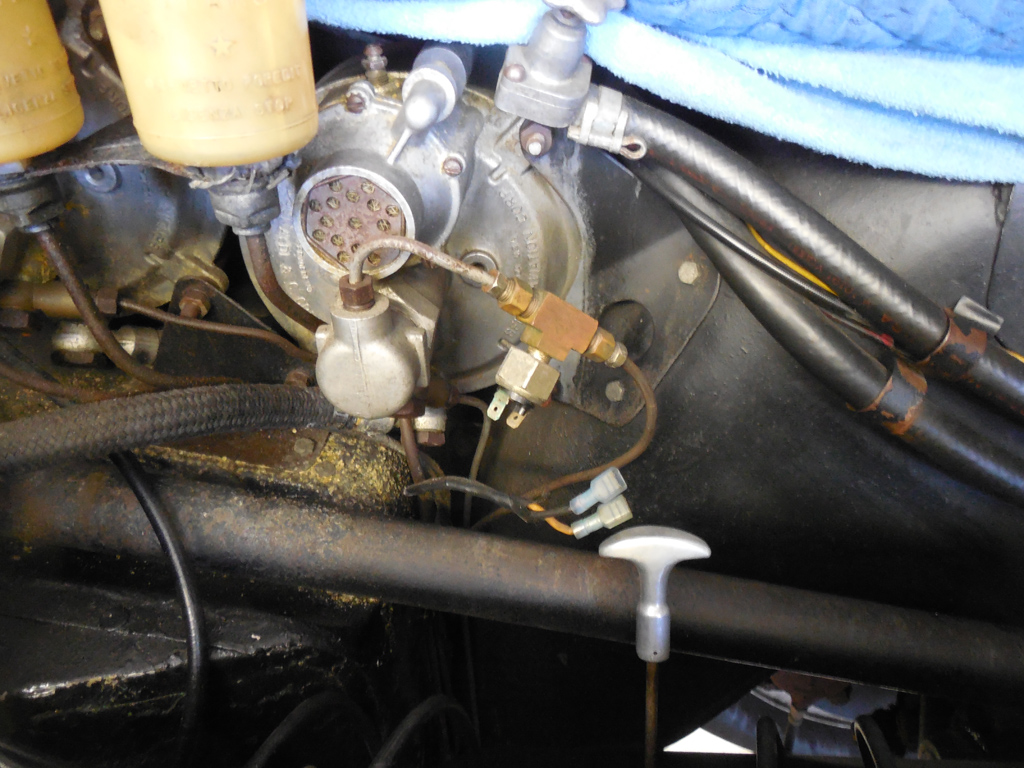 I replaced the horrible “shade tree” repaired brake light switch on the SI 330 we have at the shop. 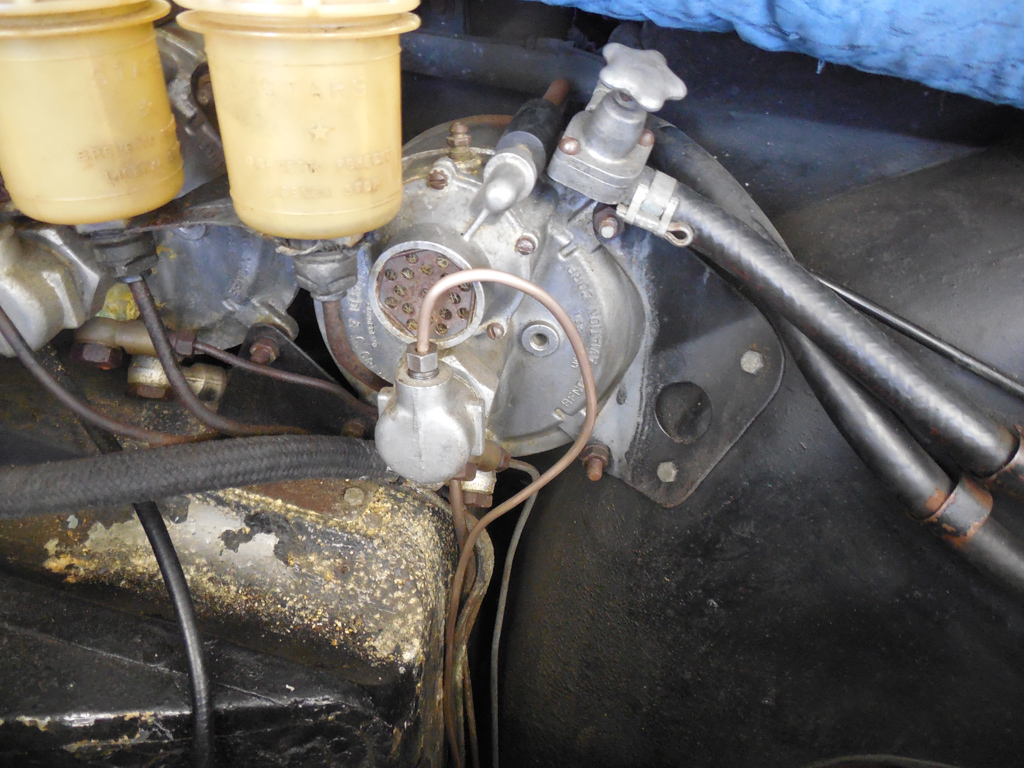 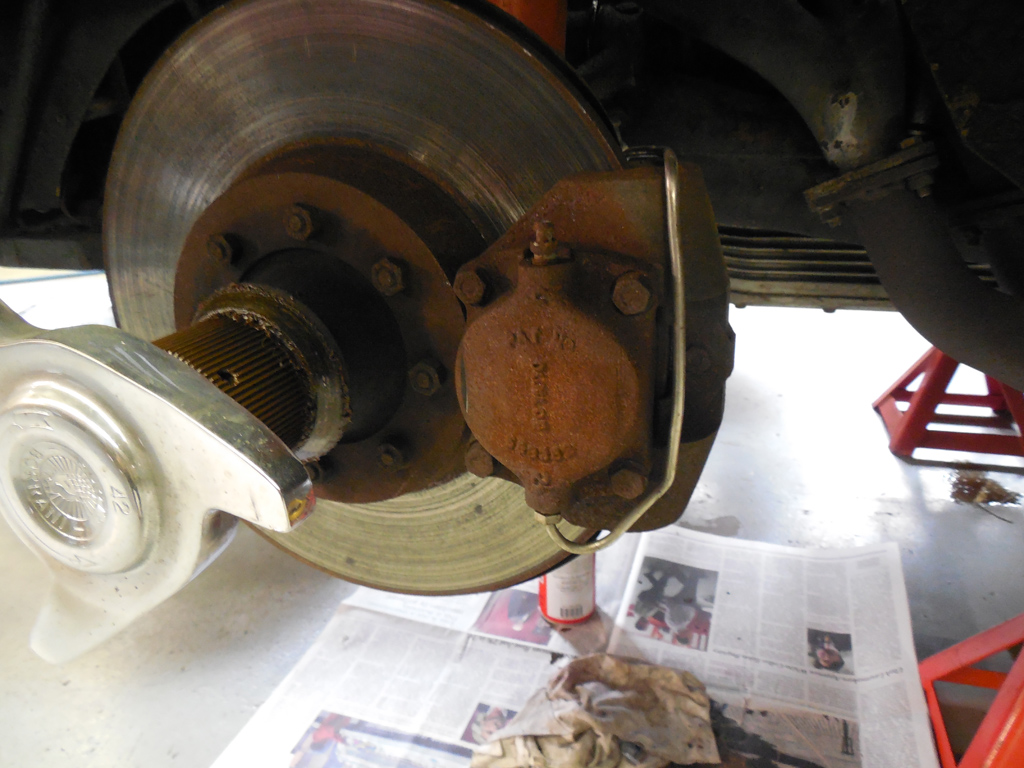 The wheels on this car will be sent out for restoring, but I was concerned about how they would look next the calipers that look like this! All four calpers are pretty rusty and I talked to the owner about it. The down-and-dirty way would be to scrub off all the surface rust and p-p-paint the calipers with silver paint! It would fool the casual observer when they looked through the spoked wheels, but the heat from the brakes would eventually burn off the paint or start peeling. I know there are some high temp caliper paints available at the local “Pep Boys,” but do you think what normally goes on a lowered Civic with a sewer pipe exhaust would be right on a Vinage Ferrari? The right way would be to have all the brakes removed, disassembled and plated in white cadmium. The right way will be more involved, but it would look correct, be correct, and I wouldn’t feel like we were just “making do.” The owner agreed, so we began the disassembly. 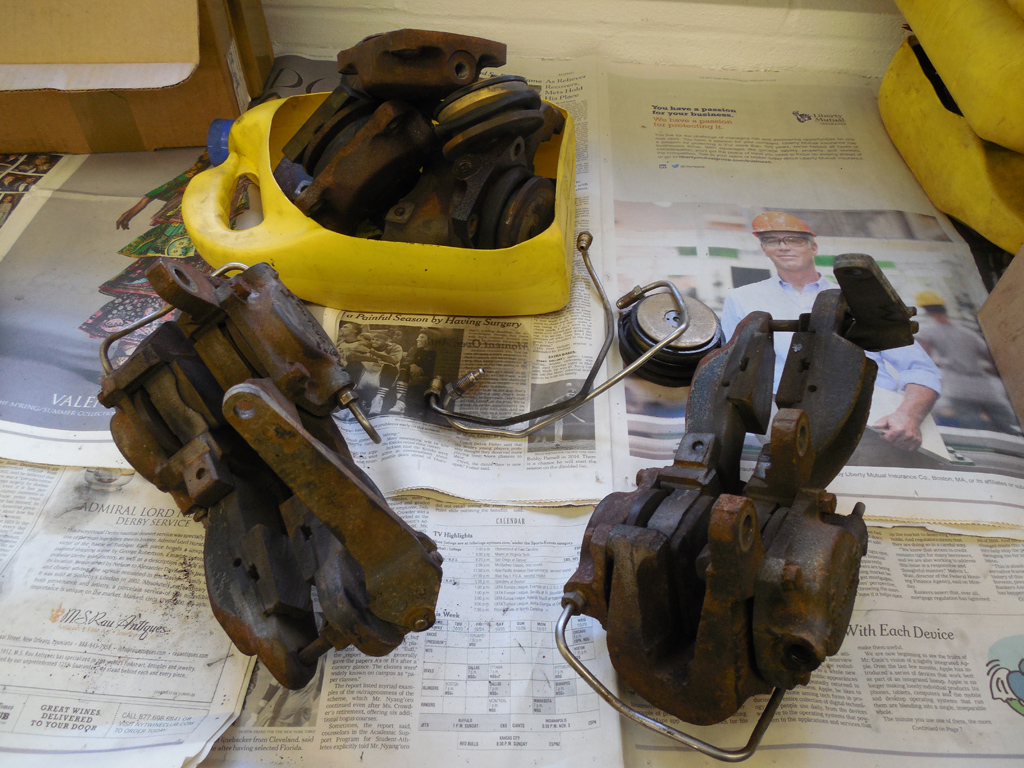 It looks like someone did some repairs on the braking system in the past but did not go the extra step and plate the parts. Now everything is rusty and looking pretty horrible. The only nice piece is they used stainless steel bridge pipes, so they stayed shiny! Taking everything apart also revealed a few calipers starting to stick in the bores, so it was good to be redoing all the brakes at this time. 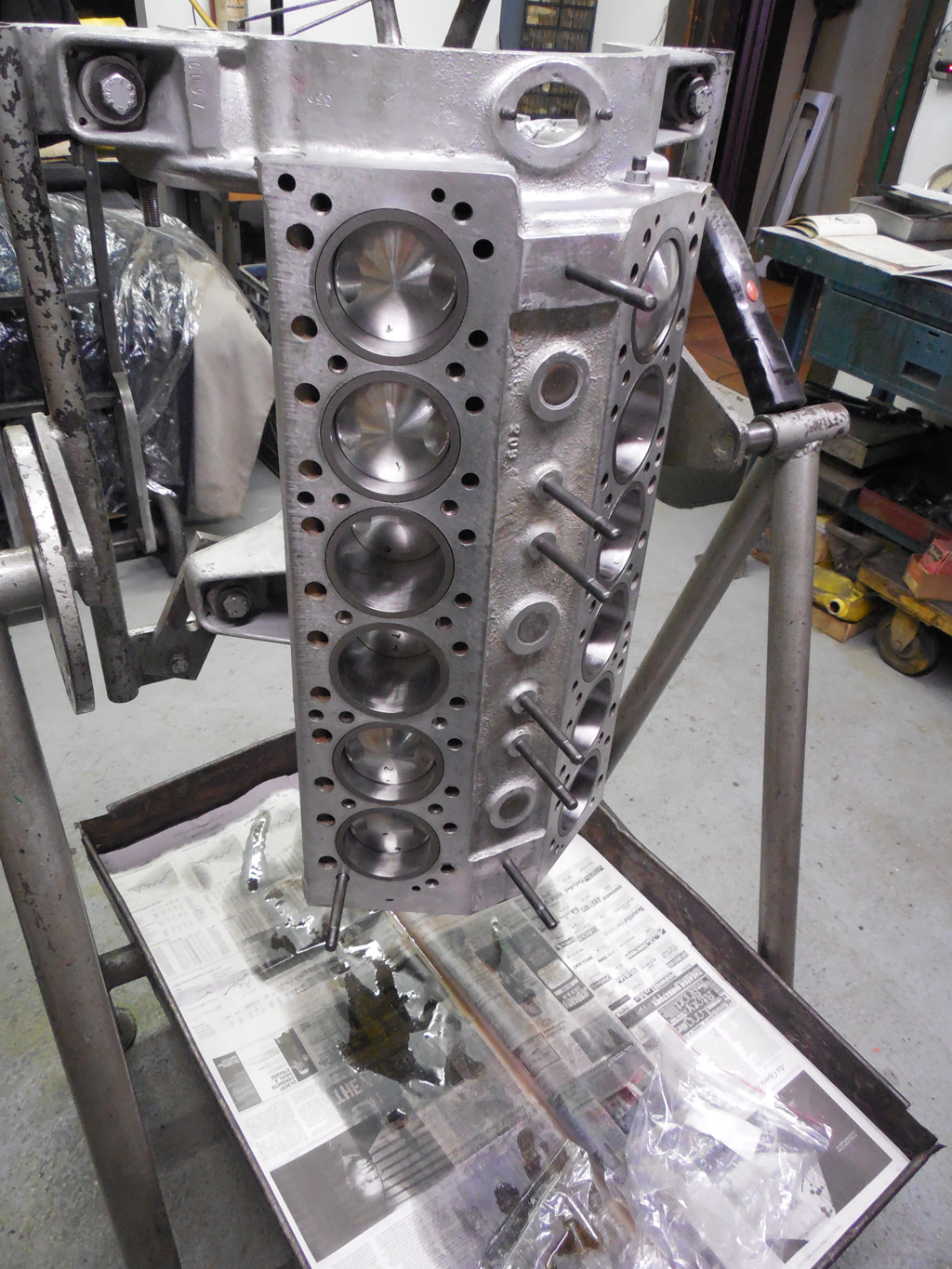 The engine assembly process began at the other side of the shop on the other 330. The assembled pistons were installed after the crankshaft was set in place and installed. 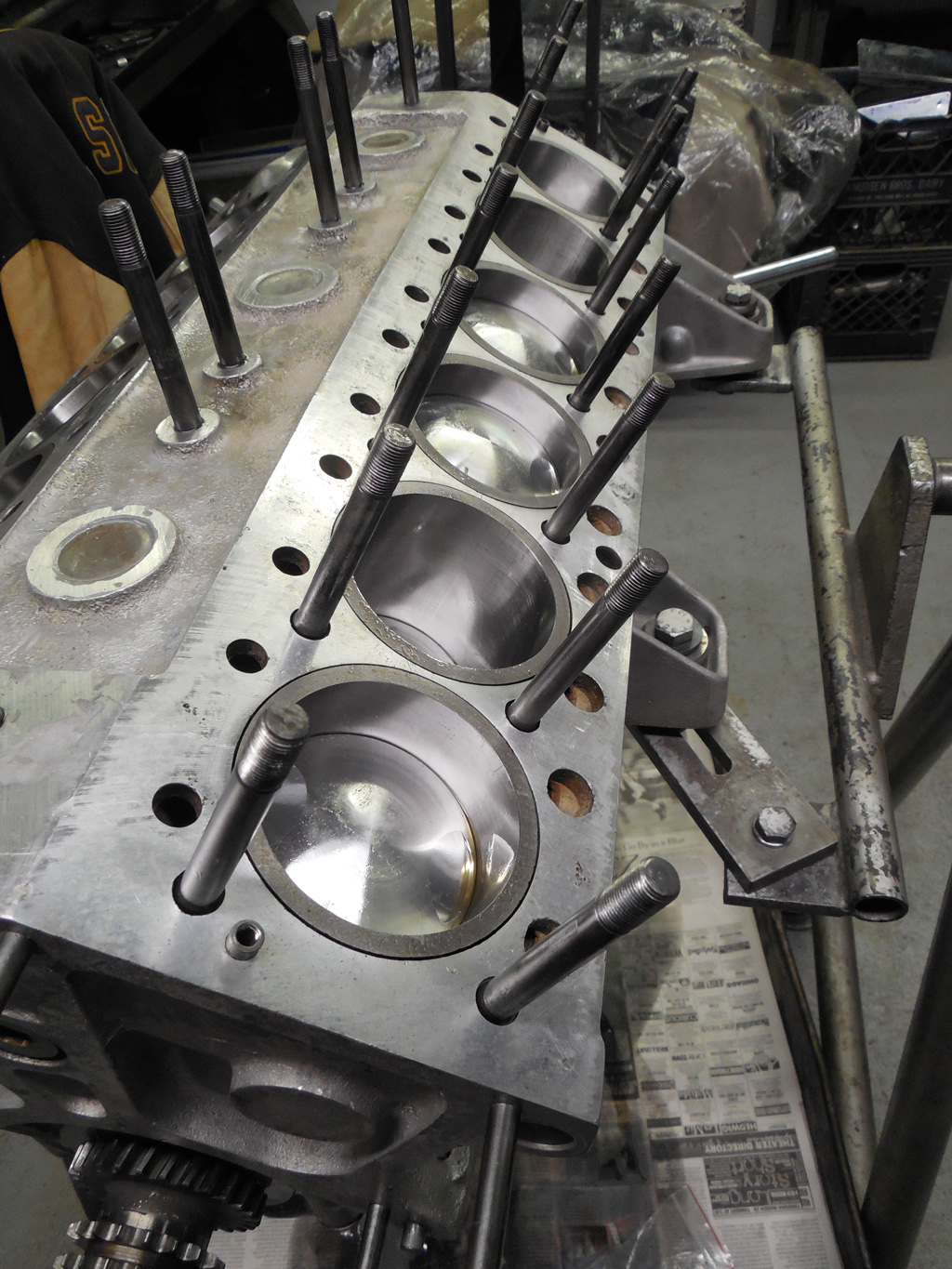 The next step was to install the head studs and check a bunch of little details that needed to be addressed and completed. One of them was to install the guide pins for the heads. These hollow pins not only locate the heads on the block, but two of them also work as oil feed lines to the heads. If someone unknowingly installed solid pins in the wrong holes, no oil would get to the heads, camshafts or distributor drives. The rear pins supply the oil the front ones do nothing.  Good to know. 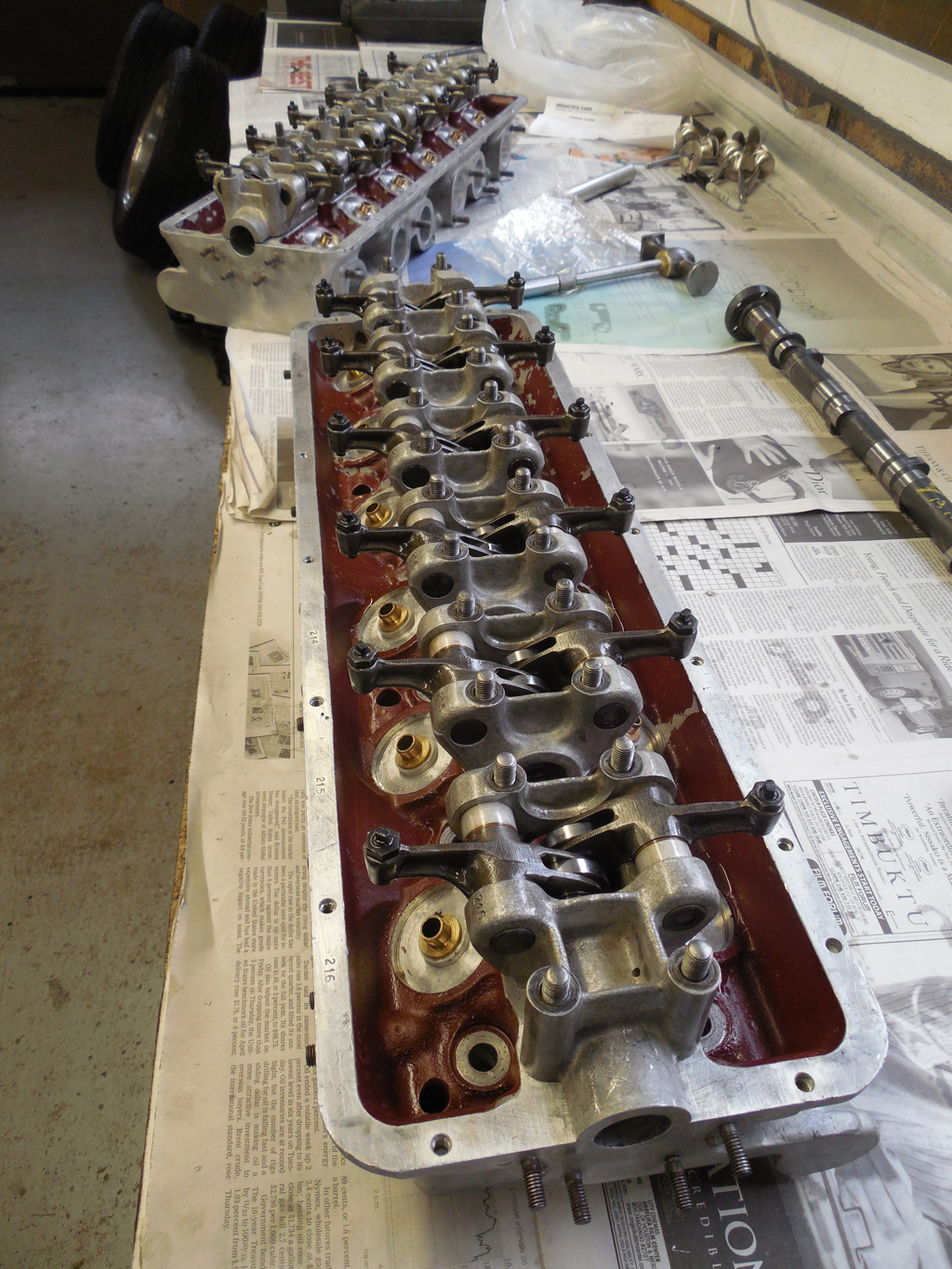 With the head reconditioned, I started checking the fit of all the parts and make an inventory of what needed to be replaced. The original camshaft suffered some damage and I sent them out to a highly recommended camshaft shop for evaluation. It was their opinion that with the amount of work needed on the orignal cam, a new one could be made for a similar price, so we agreed to have a new stock set made up from blanks they had in stock for a 330 engine. 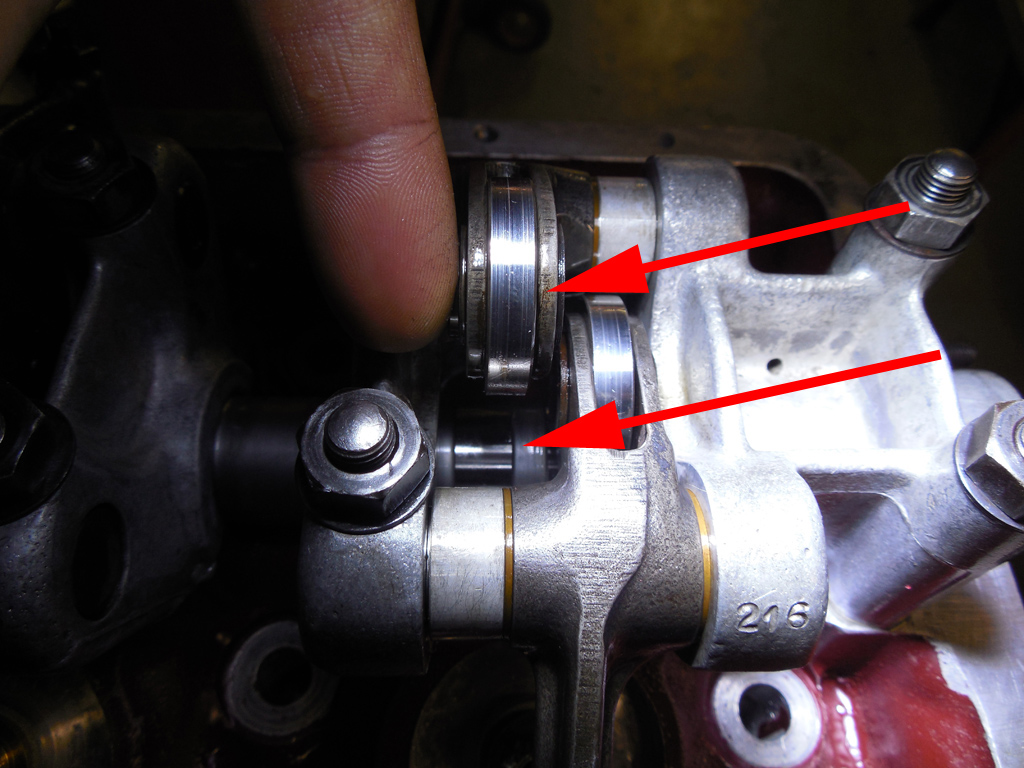 I installed the new camshafts and we started to check the fit and alignment of the parts. We reinstalled the old rollers on the rocker stands just to get a rough idea of alignment and Francois immeadiately saw a problem. All the cam lobes on the intake side were out of alignment with the roller followers by a couple of millimeters. You can see from the picture that with the new cam, the roller would be riding off the edge of the camshaft lobe. I reinstalled the old cams, and found the alignment to be more centered. There is some adjustment allowable for the roller follower, but not enough to make up the difference we saw here. I looked closer at the two cams and compared the dimensions. The new 7/12 camshft intake lobes were all off by 2.5-3 mm compared to the old cam. We had a big problem. 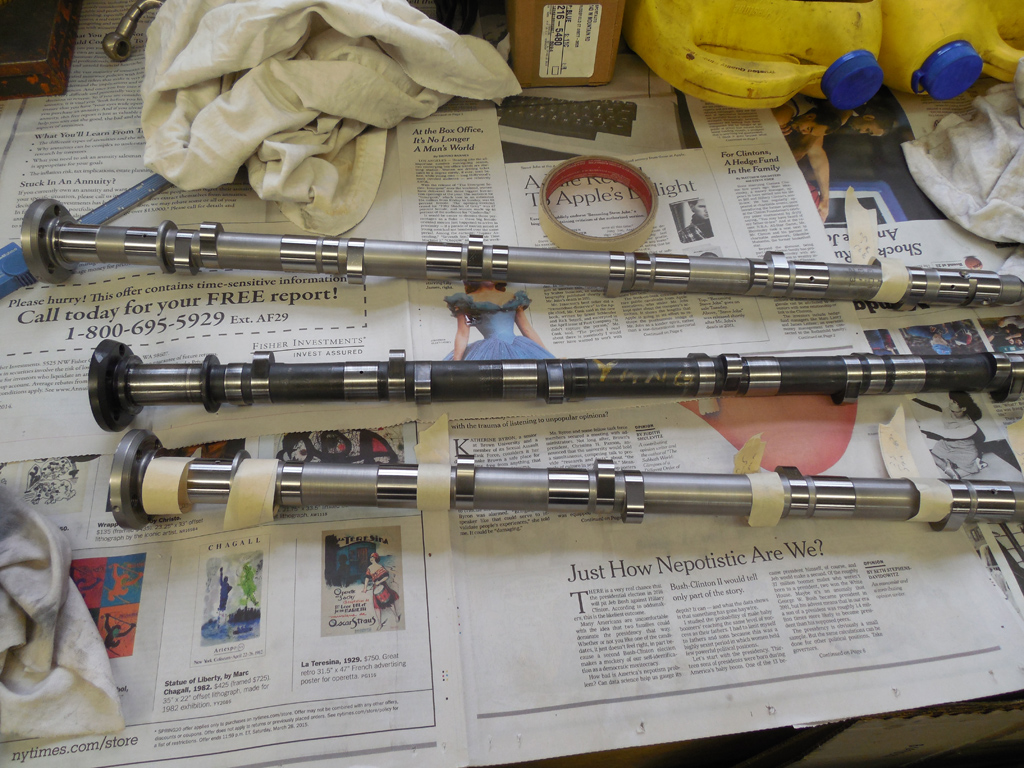 I called the camshaft manufacturer, and recieved the only answer he could give me, “send them back, and we’ll see what went wrong.” I was hoping to have this engine assembled and installed in the next couple of weeks, but now we have this. Forget about the wasted time checkng and rechecking the cams, or the $100 dollars of shipping back to the cam shop, I was the one who talked Francois into letting me send these cams out to this cam shop that “all the Ferrari guys around the country use.” Trying new vendors is always a risk, and more so when it’s with my boss watching over me. I sure hope the cam shop can make good on this job, because right now I have a lot of disappointed people in me!