330 Projects and a New Starter 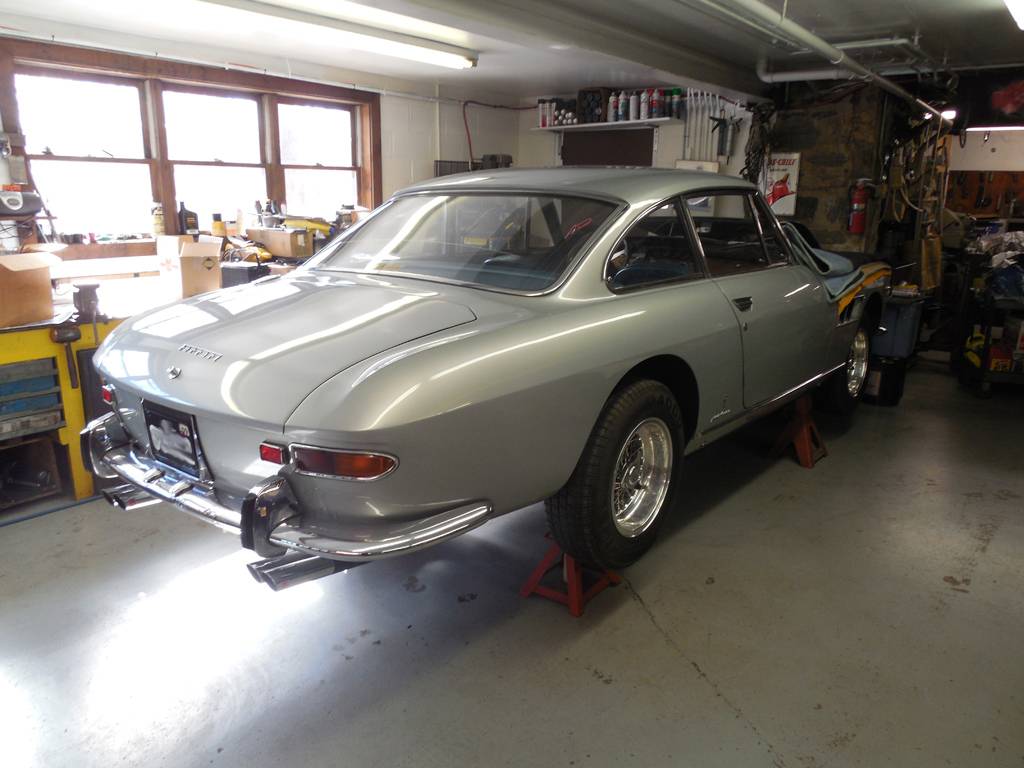 I feel I have a log jamb at the shop. We operate a small shop with space for only a few cars, and when projects stall because of parts supply or a logistical problem, work stops and we wait. The SII 330 is waiting for new exhaust tips so we can weld them onto the car, so I can’t tune the carburetors. The tune of the engine can change depending on the change in back pressure from the new tips. I’m still looking for a center section for this car, and am waiting for a supplier to call me back. How long does it take to look for bumper? We’re also trying to find a match for the blue interior on this car. The plan was to re-do the front seats, and try to find a match for the rest of the interior. The problem is the interior was dyed once before, and finding new leather in the same color has been elusive. We’ve considered dying the front seats to match the rest of the interior, but have not had much success getting a match in the dye. My upholsterer is still working on a solution, but until one is found, I wait. 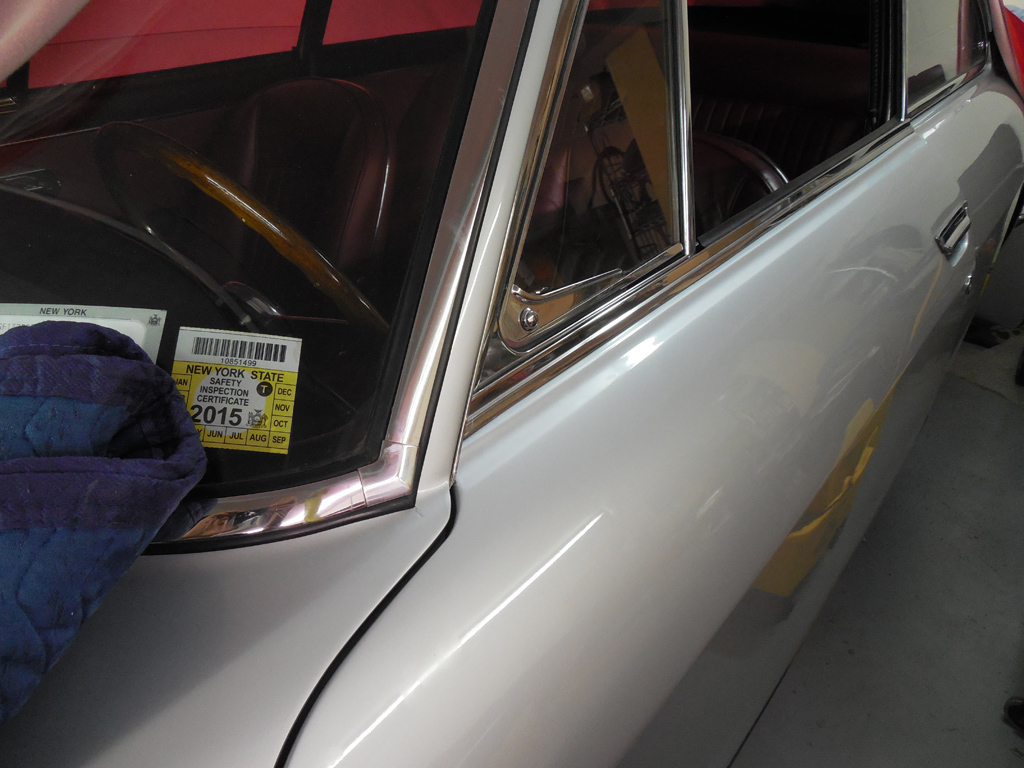 The SI 330 is waiting for the booster cans to be replated, so I can rebuild them. Until they can be installed, this car too is stuck in the shop. There are a couple of small projects that needed tending, so I started with figuring out where to install a side view mirror. The missing side view mirror makes for uncertain lane changes, and the owner wanted to fix this problem. The decision is how involved to work with the mounting. Many people simply screw two sheet metal screws in the door, and call it a day, but these screws have a tendency to work themselves loose. After a few years of adjusting the mirror, the screws will loosen, and wallow out the holes. A repair at that point will get more involved, and maybe scratch the paint from the loose mirror. The right way the mount this mirror would be to use a machine screw, nuts and a backing plate. 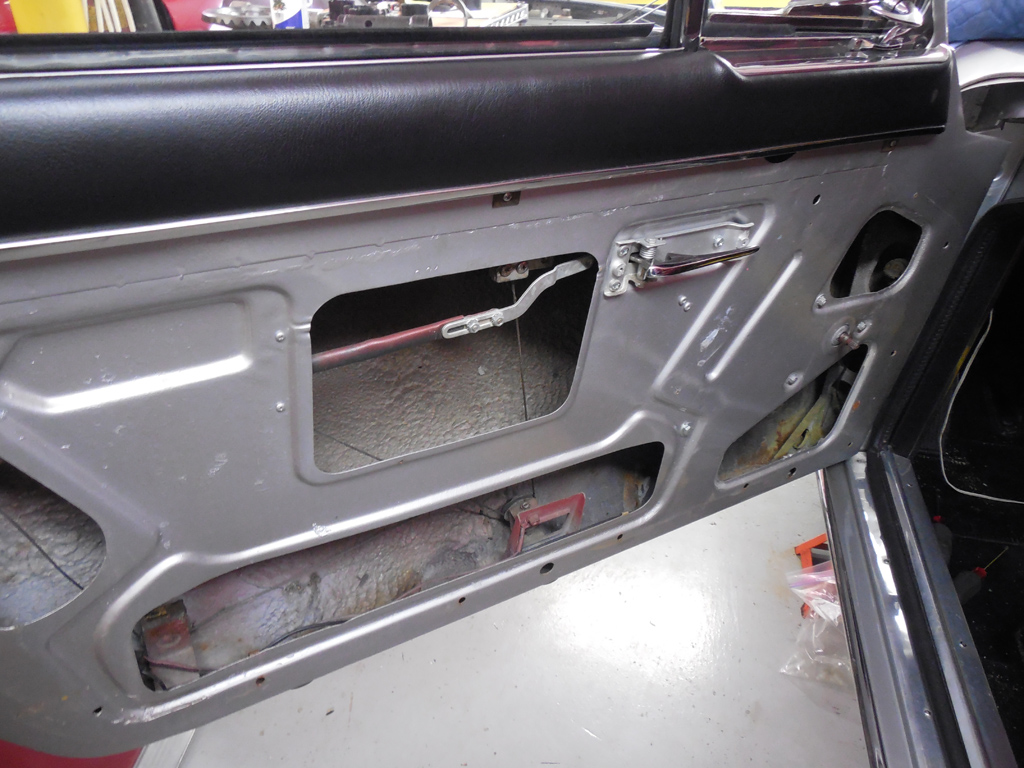 The first thing I had to check, however, was if there was enough room behind the door skin to get a nut to secure the other side of the mirror. It’s a little tight, but I might have another solution. 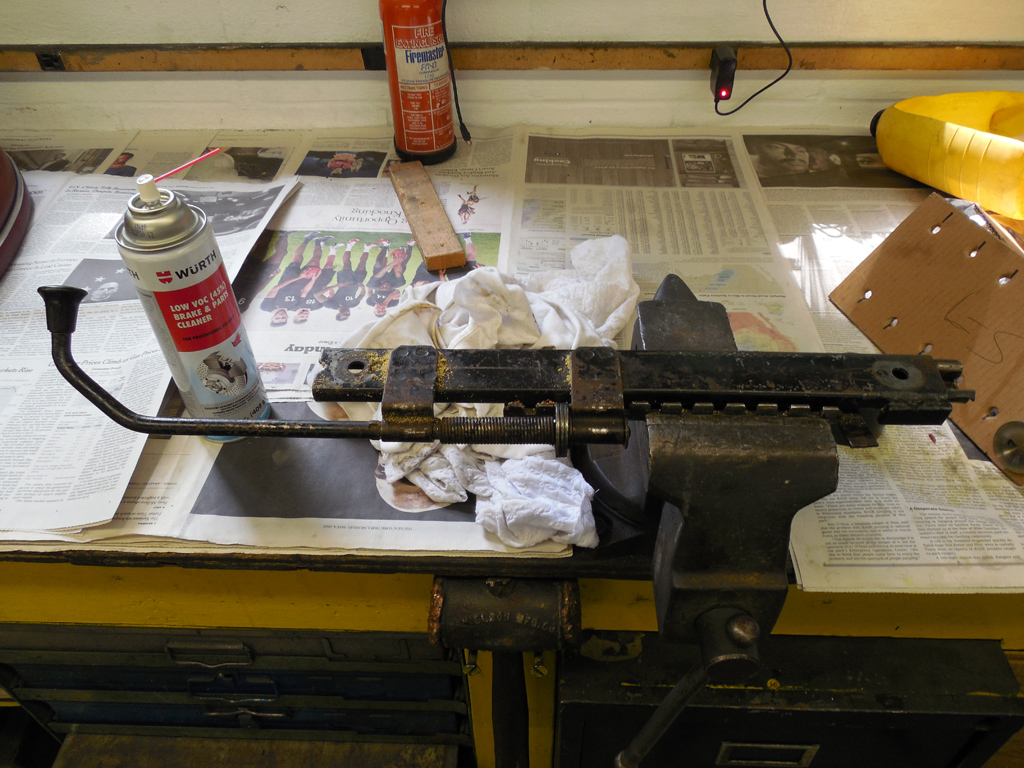 While I was working on the interior, I needed to address the seat tracks in this car. The adjuster on the driver’s side was broken, and not holding its position. It was pretty annoying to press on the brake pedal and have the seat slide back, so something was wrong. 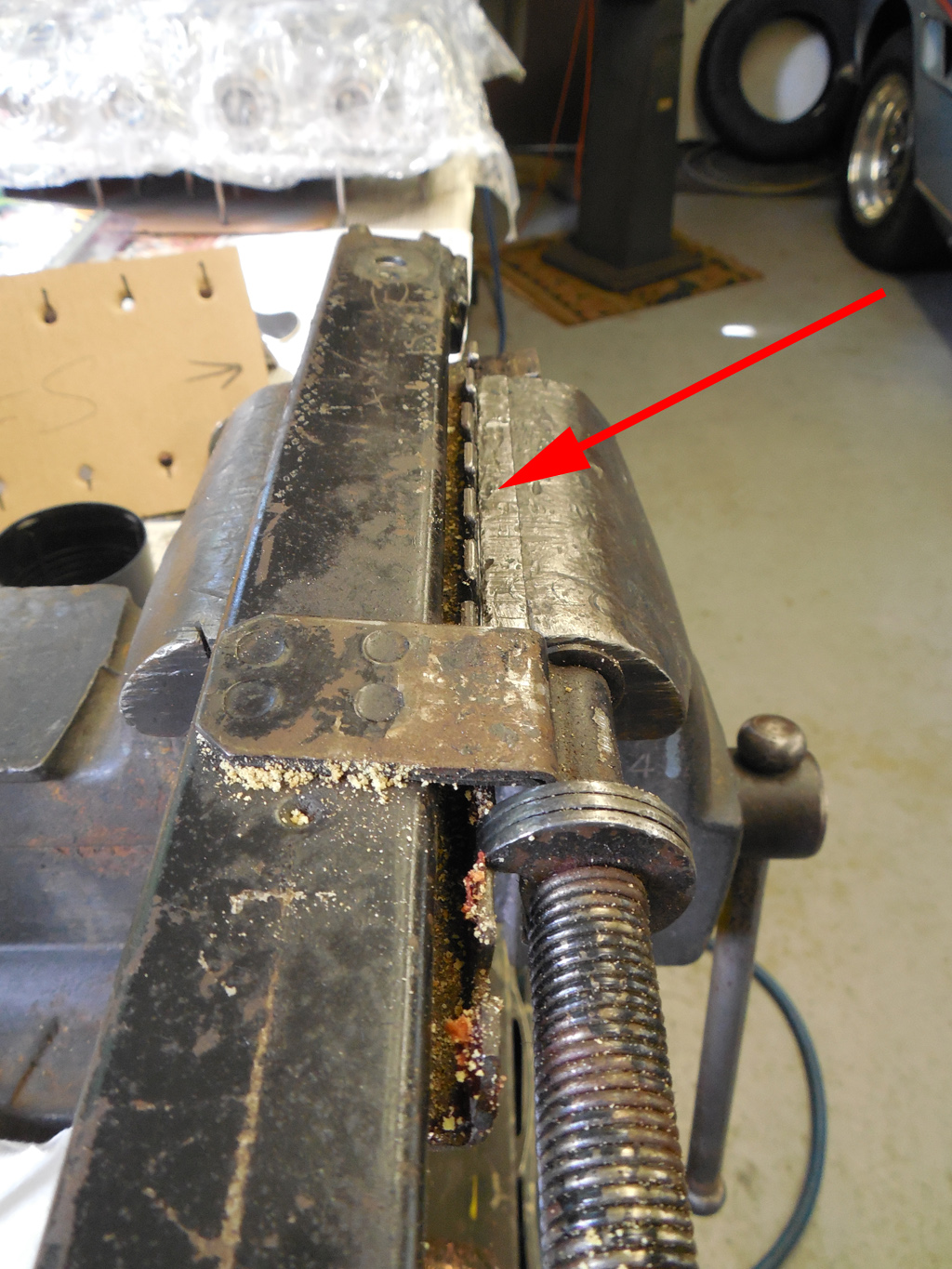 I soon discovered the bracket and teeth were slightly bent, so neither part was engaging properly. After a little bending and a little filing things were working better. 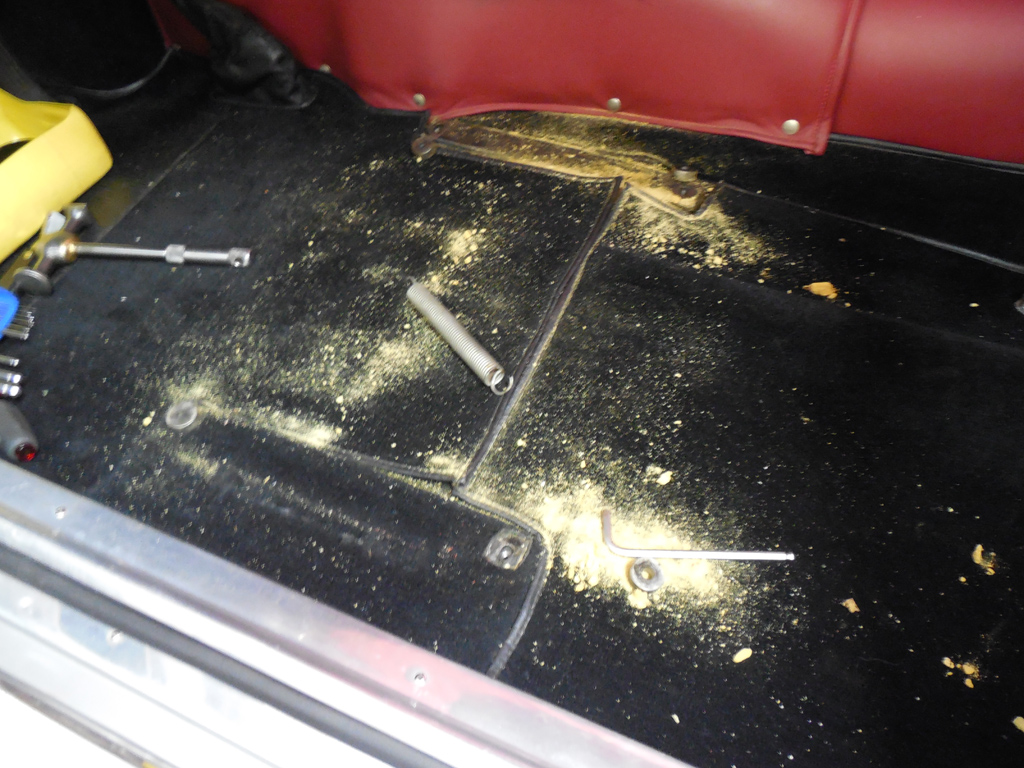 With the seat out of the car, you can see this car suffers from a common problem with old Ferraris, the dreaded crumbling foam from inside the seats! 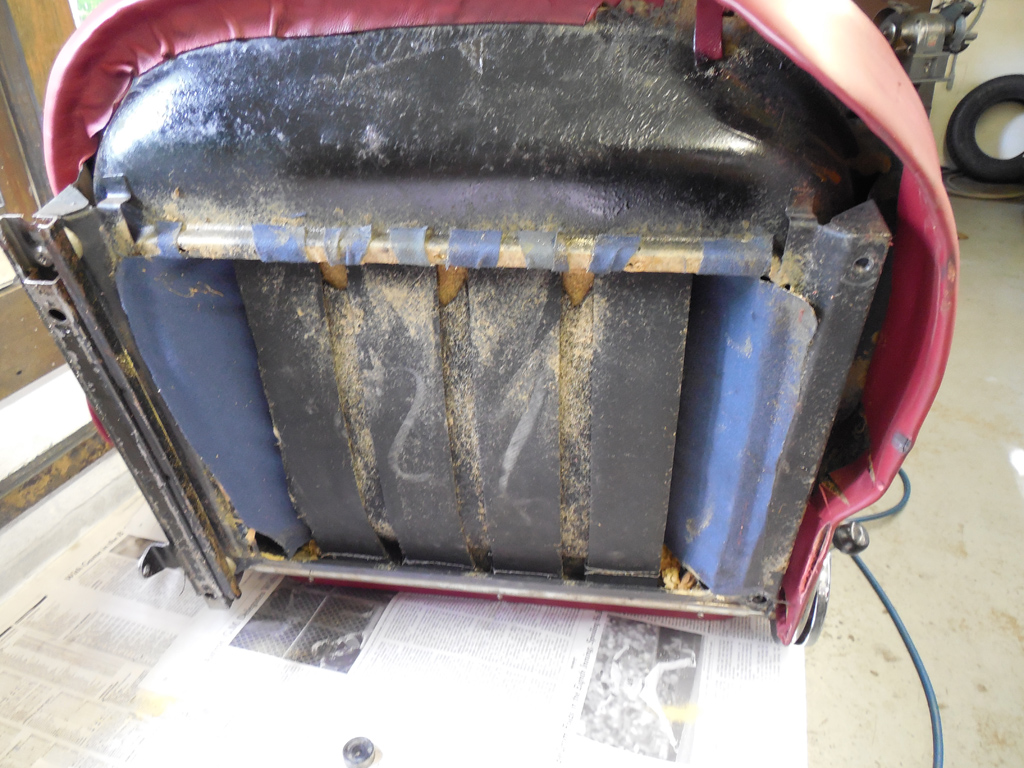 Even though these seats were reupholstered, the previous shop did not replace all the foam inside the seat. The original latex foam inside the seat dry rots over the years and turns to dust. Upholsterers have tried all sorts of tricks to try and seal off the bottom of the seats to stop the crumbs from raining down on the carpets, but it’s a losing battle. The fine foam shoots out from all the crevices like a squeeze bottle of talcum powder every time you sit down in the seat. 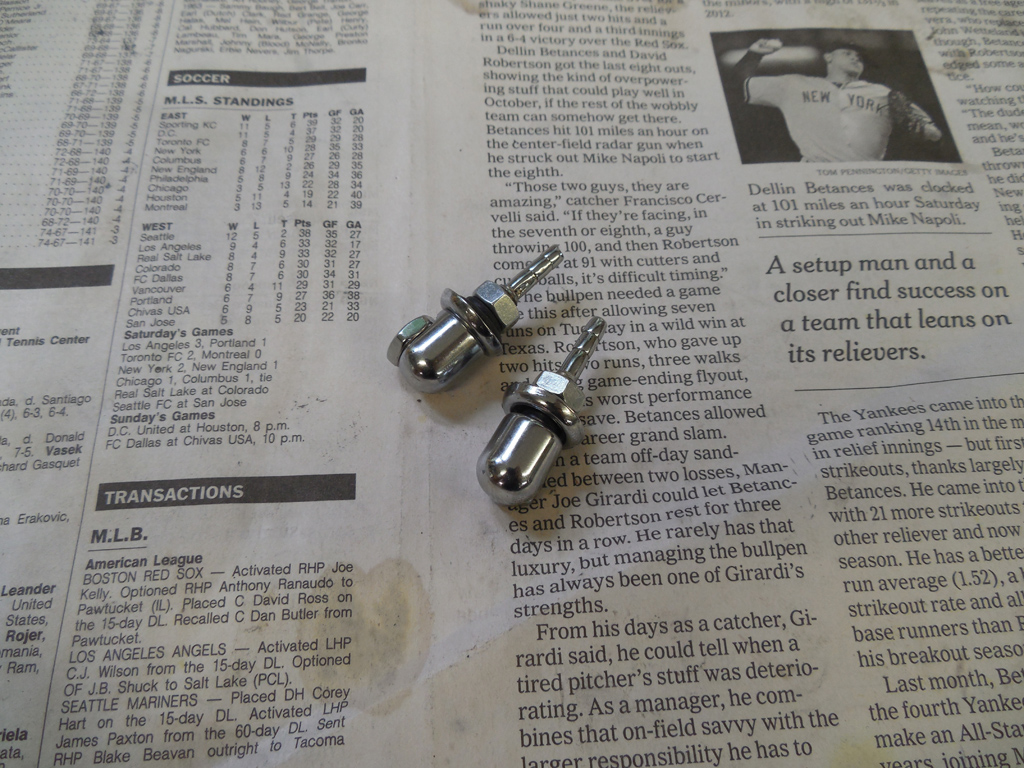 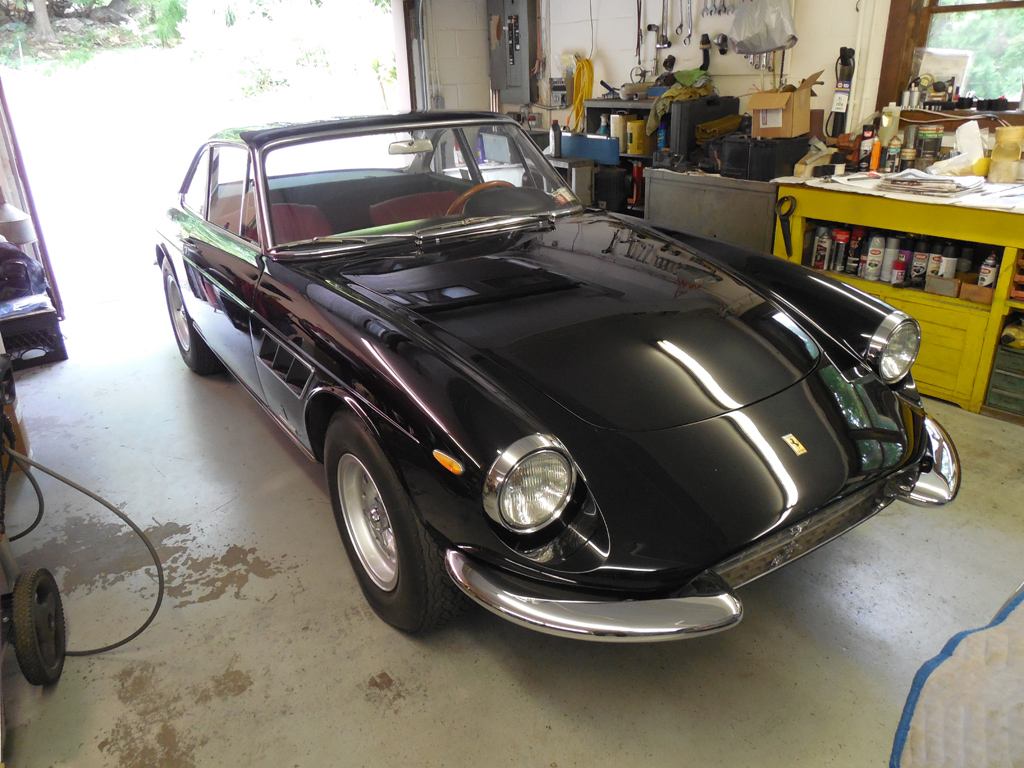 Since I’m kind of on a standstill with all the other cars at the shop, we brought another car in that hopefully will be a quick in and out job. Sitting around waiting for parts doesn’t make me any money! This 330GTC has developed a starting issue that has escalated to more of a problem. During short stops after the car has warmed up, like when you stop for fuel, the owner can’t seem to start the car. The starter does not turn over at all. We asked to check to see if the battery is in good order, but we’re pretty sure the problem was in the starter. As the temperature rises, resistance goes up as well, and problems start showing up when the starter refuses to turn over when it’s hot. Allowing the engine to cool off usually allows the starter to work, but things will only get worse. Sometimes a rebuild will solve the problem with new brushes, and a good cleaning, but some parts internally can get more expensive to fix. 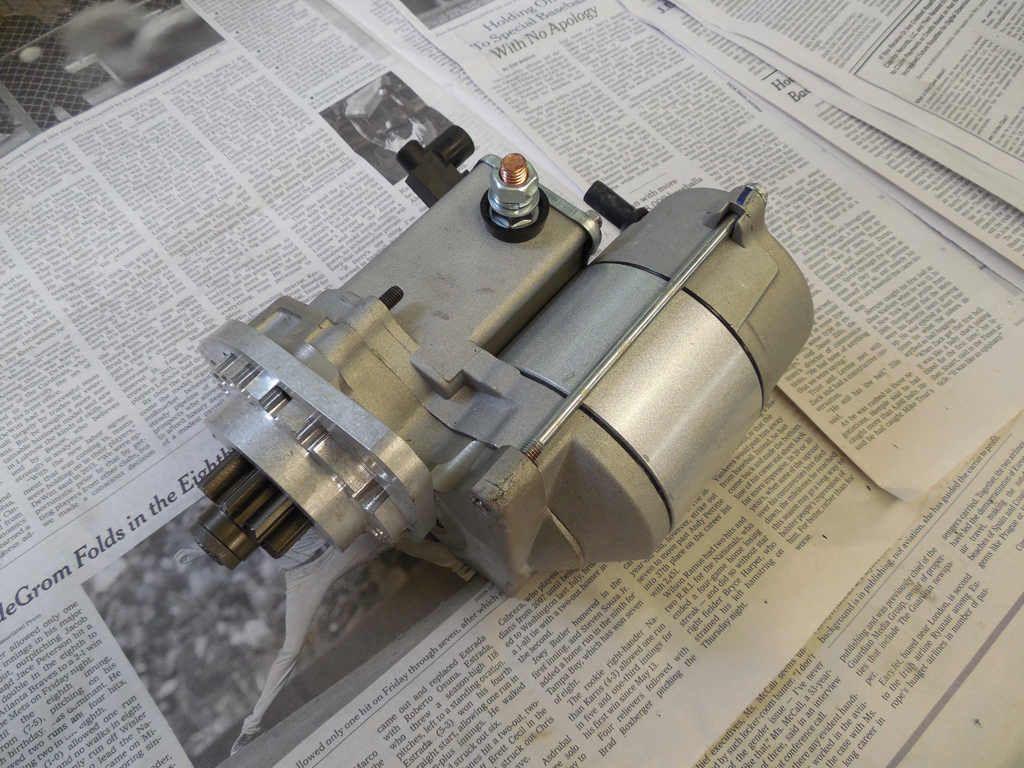 A much more reliable solution is to install a modern high torque starter with a more efficient motor and gear reduction. These starters are being installed on many old cars because of their reliability and lower demand on the electrical system. The original Ferrari starter is a beast, with a very power hungry motor. I know with my car, when the battery is weak, my starter draws so much amperage that it pulls power away from the coils. I can actually hear the engine catch the split second after I release the starter switch and power is restored to the coils! These modern starters are supposed to take less current, and should make startup easier. 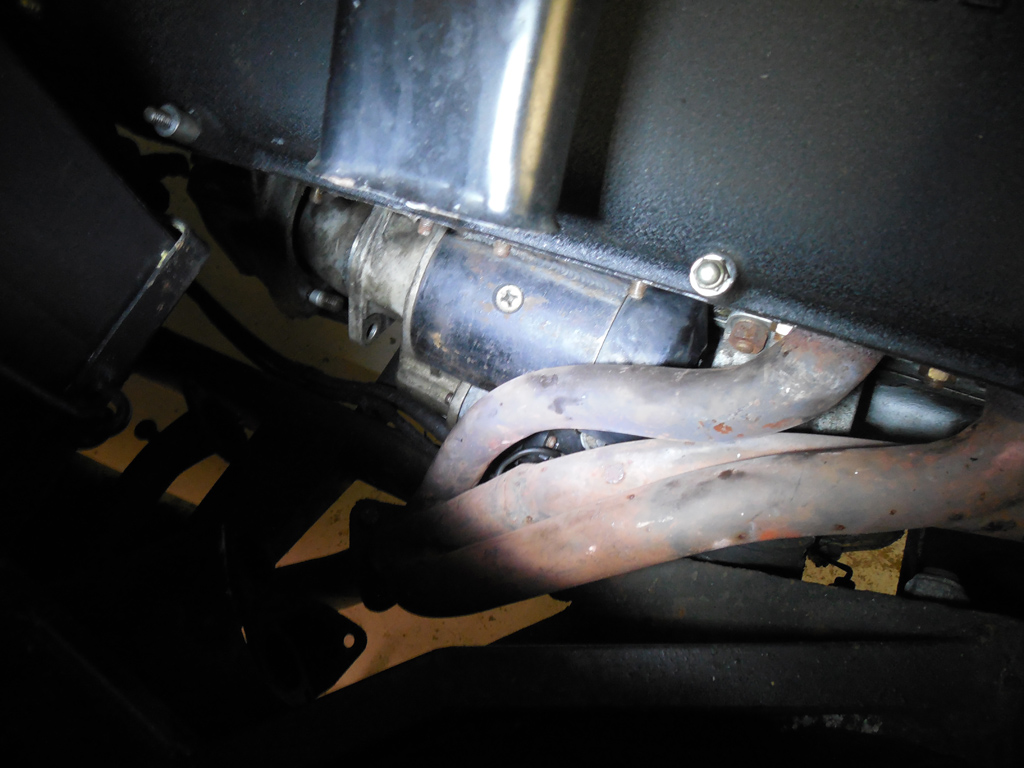 The first step to the upgrade is to pull the old starter out. Normally on most other 330s the rear section of the right side header has to be removed to gain access to the starter, but I soon found out on this GTC, that the slight bend on #3 exhaust header was still in the way of the starter. I guess with 330GTCs, both headers have to come out! 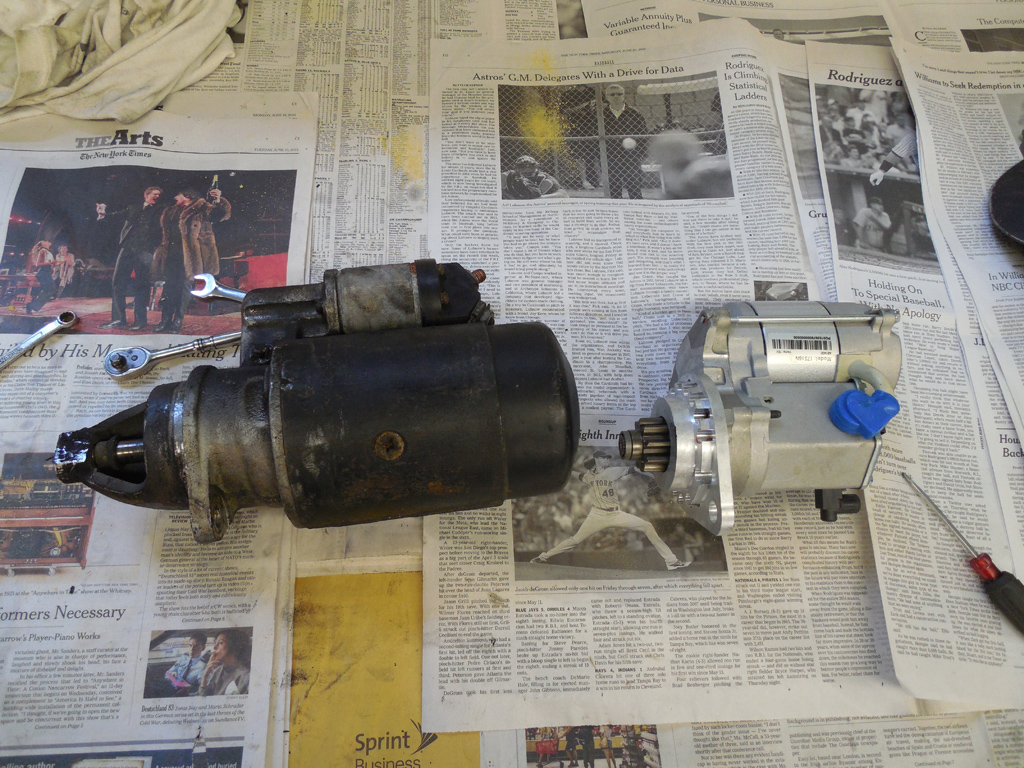 The original Marelli starter is nearly three times as large and certainly that heavy than the high torque replacement. It makes the new one look like a toy!

The new one popped in without any problems and now the car starts with a short bump of the starter switch. Some people will miss the old groaning noise the original starter made, but the GTC starts so fast now, you barely have time to notice the difference in noise! I will test it over the next couple of days to make sure everything works in different temperature ranges.

Now I’ll have to decide whether I should switch my starter over to a high torque starter as well!

I’m all registered and ready to attend Concorso on Saturday 15th of August and the  FCA event on Monday August 17th. Please contact Concorso, or the FCA to register for their respective events.

At last count, there will be 13 GTEs and 3 330 Americas! If you have one of these cars, don’t miss the opportunity to join us!