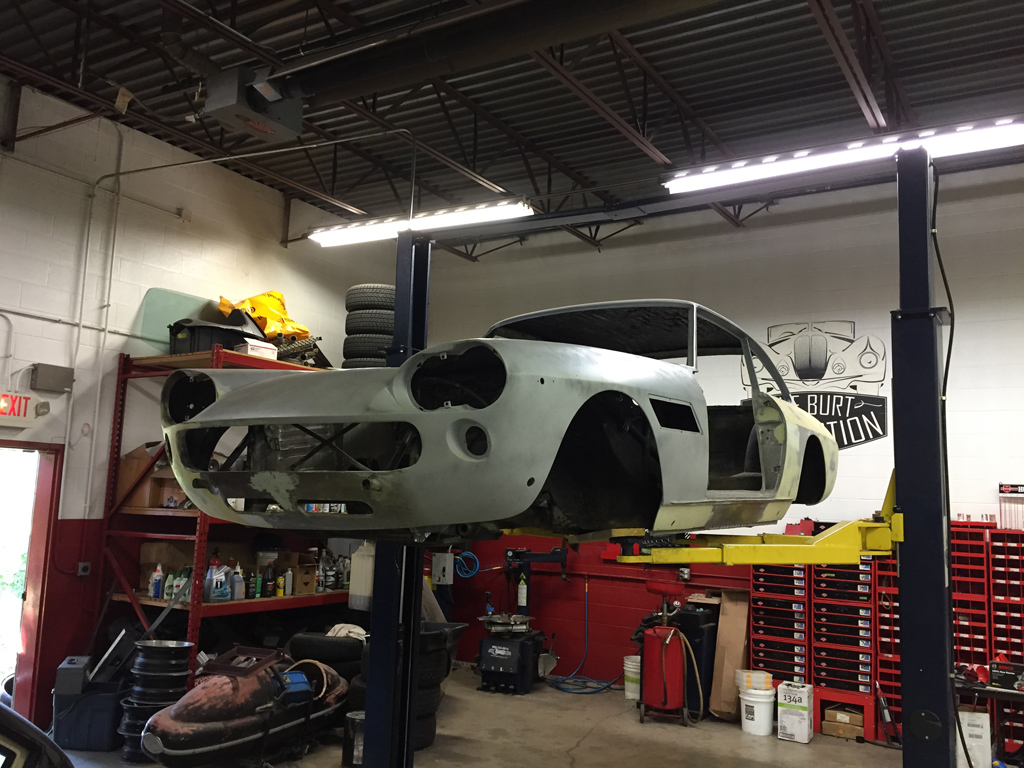 I was contacted by a person who won an E-bay auction for a Series I 330 GT 2+2. The car was in Chicago, and the buyer wanted to ship the car to the UK. I was asked to help inventory, prepare, and load the car onto a container to ship overseas, The timing was not the greatest, as I was trying my best to get several cars prepared to ship out to Monterey, but I knew I was probably the best person to do this job, so I juggled my schedule around to accommodate the buyer to spend a couple of days in Chicago! 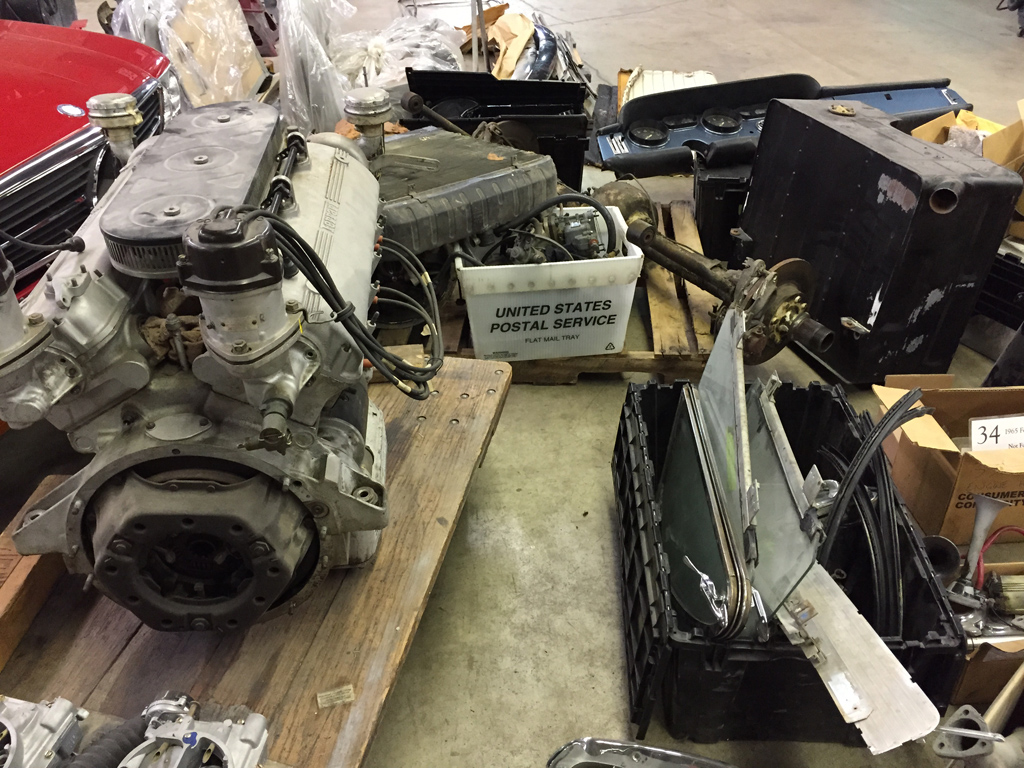 The shop where the car was stored was in complete disarray. Most of the Ferrari parts were grouped on a few shelves, but it was clear the parts were moved several times since its disassembly. Nothing was labeled or organized so we had a lot of work ahead of us. The shop was a bit of a hobby shop, where the owner employed people to “restore” cars, but there was no focus. There were Fords, Ferraris, Rolls Royces, and Porsches, all partially disassembled and co-mingled on shelves and piles on the floor. 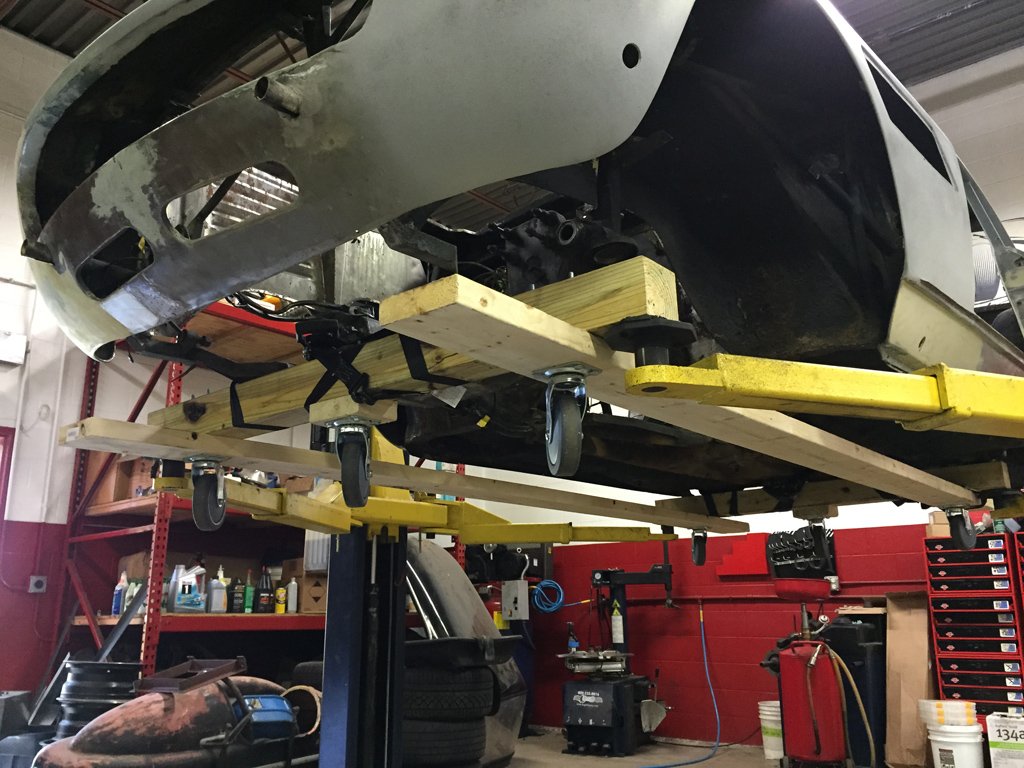 The first task was to get the frame and body on wheels since the suspension was removed. We bought the strongest wheels I could find at the local home center, built a substructure out of lumber, and strapped the frame to it.

I discovered the owner had ordered a 20 foot sea container to ship the car and the parts to the UK. Having moved my car several years ago when it was largely disassembled, I knew 20 feet was not a lot of room. The car is 16 feet long by itself! 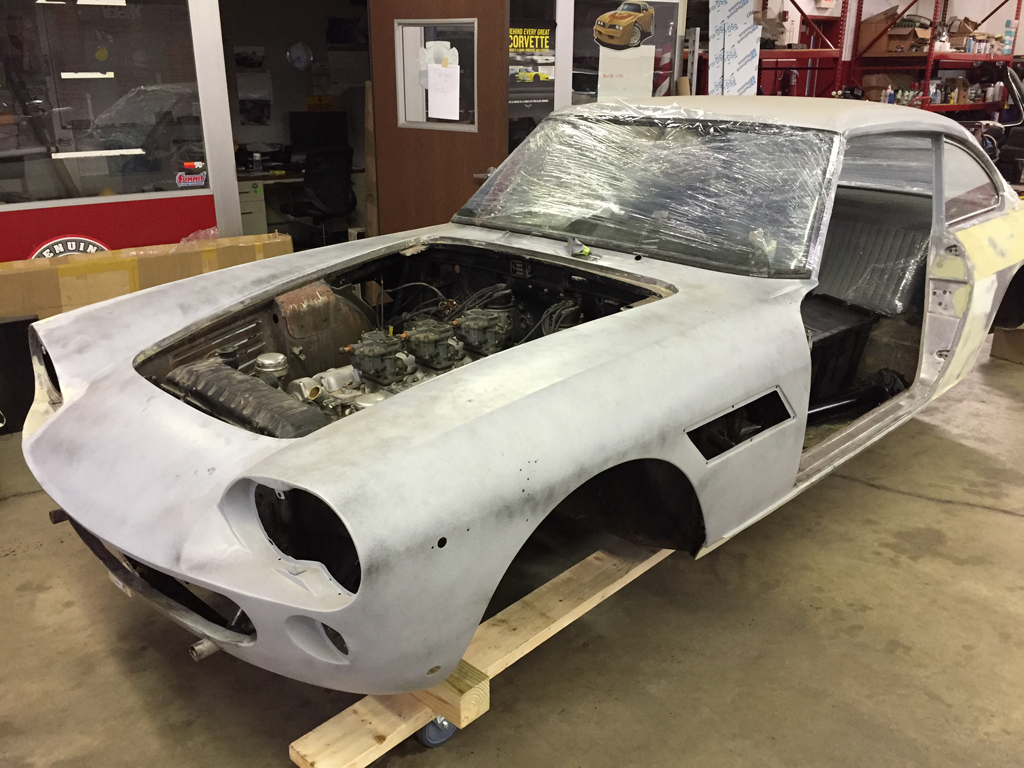 With the car on wheels, I decided the best plan of attack was to install as many of the parts back on the car to save room in the container. The engine, radiator, carbs, gas tank, front and rear glass all were reinstalled on the car. This job was made even harder because I had to find all the special bolts and nuts that were tossed in Dixie cups to install all the pieces.  I put the weather stripping back on the glass to insulate it from the frame and plastic wrapped it all in place. Shipping windshields is always a risky affair, but I think this was the safest method without using a lot of space in the shipping container. 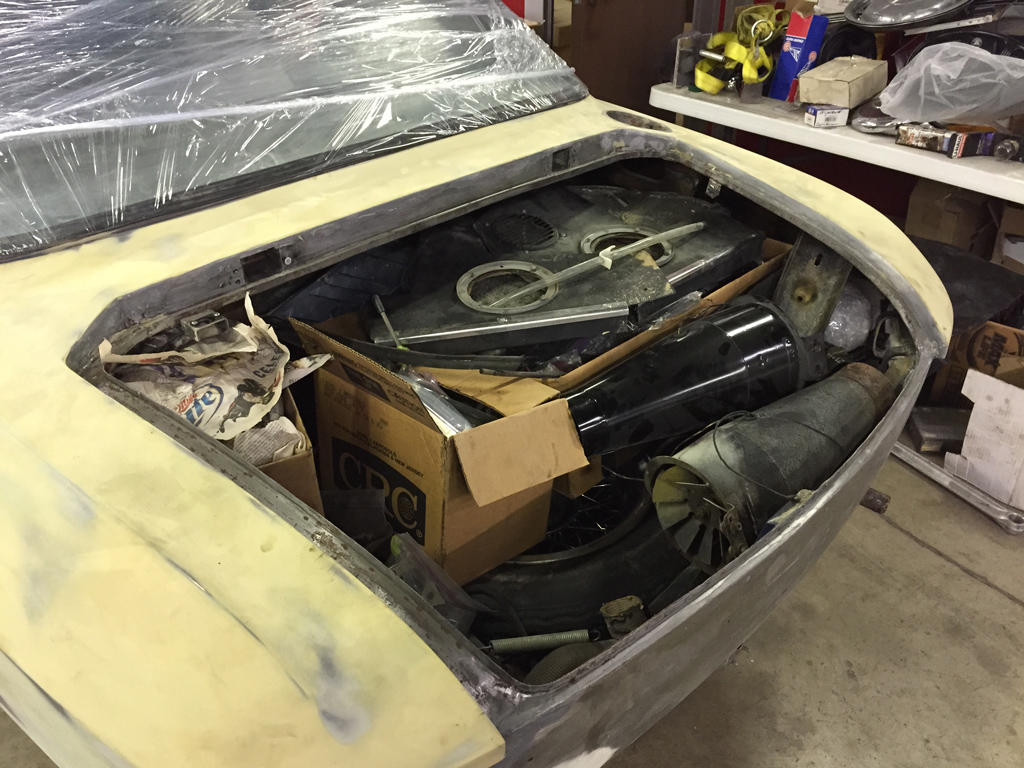 I spent my time filling every nook and cranny to store parts. Every available space was used with the goal to save as much space as we could. The added pressure was the truck with the container was going to wait for us to fill it and my flight out of town was only a couple of hours later. We wouldn’t have the luxury of loading the car and filling the container at our leisure, so I crammed everything in. 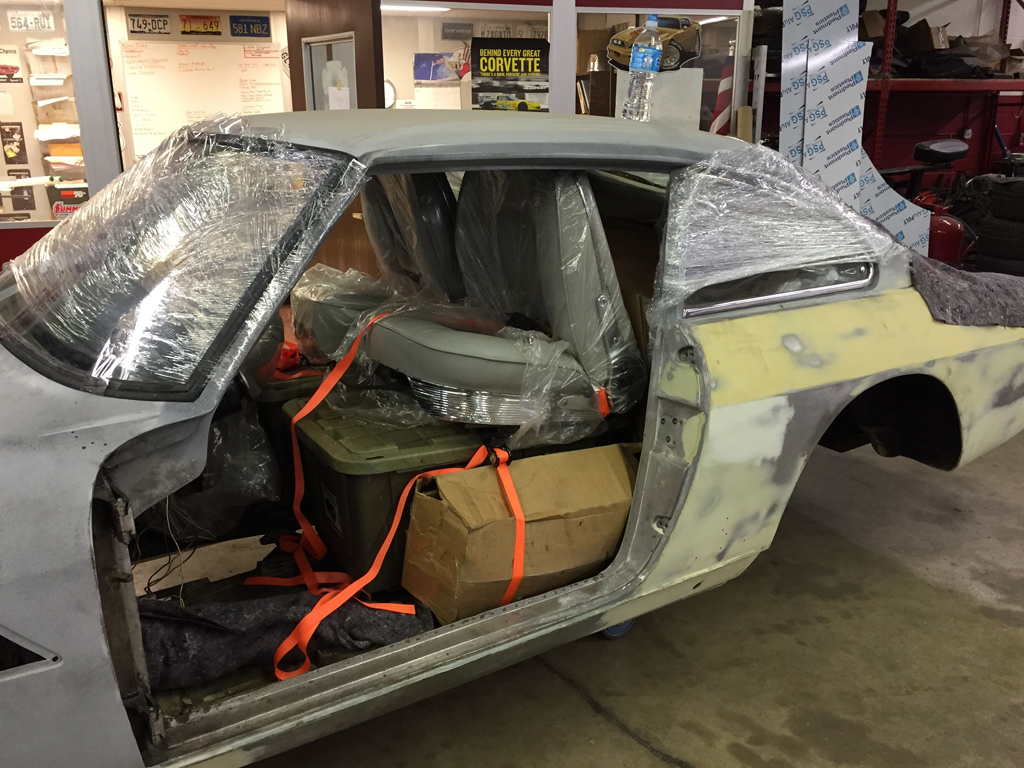 This reminded me about a joke passed around in my previous career in TV when I used to work with a music instrument rental company in NYC called SIR, Studio Instrument Rentals. We used to say their motto was “Pack tight, drive fast!” We also used to say “SIR” stood for “Stoned Inefficient Roadies,” but that was a whole other joke. 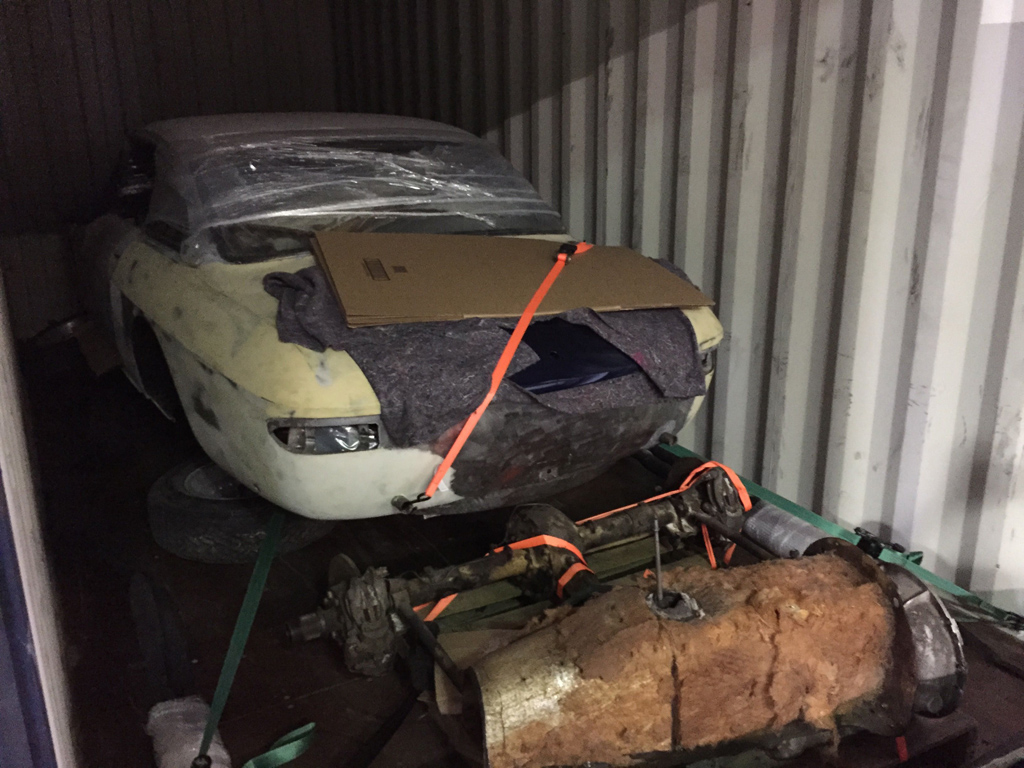 After about 16 hours of work, we managed to get everything ready to ship. The truck arrived with its 20 foot sea container, and we carefully rolled the car inside. We were right at the load limits of the dolly wheels, but managed to get it into place and strapped down for her trip across the ocean . We ended up having only the transmission and rear axle strapped to a pallet,  but we barely had enough room! I’m sure glad I made sure we crammed the car with all those parts!

I’m all registered and ready to attend Concorso on Saturday 15th of August and the FCA event on Monday August 17th. Please contact Concorso, or the FCA to register for their respective events.

If you want more information on the car shows contact:

At last count, there will be 19 GTEs and 3 330 Americas! If you have one of these cars, don’t miss the opportunity to join us!