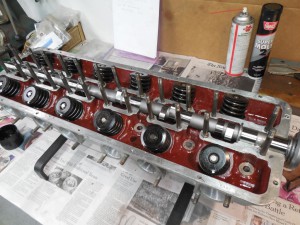 With the cars on their way to Monterey, I had a week off before heading out to California to join the cars in the festivities. That didn’t mean, however, we didn’t have plenty of work to do at the shop! Yale’s 330 engine is going back together because a new set of camshafts arrived from the camshaft manufacturer. New camshafts were made to replace a previous set that had some alignment issues, but these look good and everything seems to be order.

The cams were installed, along with the rocker stands. The side play in the rocker assemblies were checked and anything that was out of spec was brought back into tolerance. 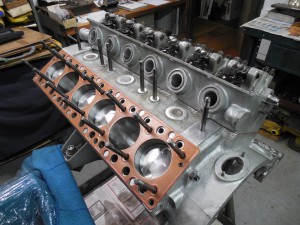 After the heads were assembled, they were prepped for installation on the block. We’re still able to get these Australian made head gaskets that do a much better job sealing the heads than the Elrings we had so much trouble with several years ago, but the rumor on the street is the Australian supply is about to run out. I heard the company that made these gaskets was sold, and the new owners dissolved the gasket manufacturing division. So far the contact in Australia has not been able to find a manufacturer to make these gaskets to his specifications, so when the stock from our supplier runs out…

I still spray on silicone copper sealant on the gasket for an added level of security to insure the water passageways seal on these gaskets. If you’ve had problems like we did several years ago with bad head gaskets, you would be just as cautious! 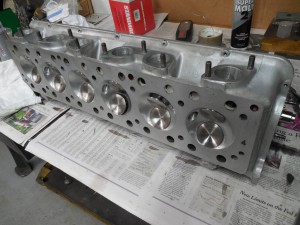 Before setting the heads down onto the block, I had to make sure the cam was indexed correctly so nothing would touch. The crank and camshafts at this point are not connected so care has to taken to avoid interference and damage to the parts. 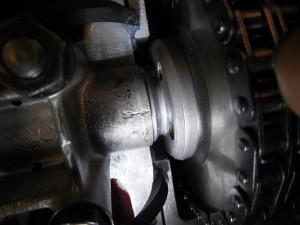 With a new camshaft, there are no marks to line up with the factory pointer to even roughly install the heads, so everything has to be set up from scratch. 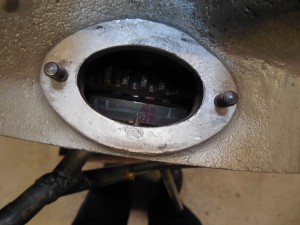 valve timing
Once the heads were installed, and the camshaft chain is installed at PM 1/6, I began the process of timing in the camshafts to the flywheel. The “AA” marks and “CS” marks on the flywheel are for the valve timing.  It’s a process Francois has shown me before how to set valve timing, but only when he was performing the process himself. This time, however, he let me do it while he watched over me. It’s a procedure that lines the camshafts precisely with the crankshaft so the valve timing is accurate to the position of the pistons. Since these camshafts were new, we needed to accurately fit them to this engine. The chain and sprocket assembly allows for a very precise alignment, but this flexibility also allows a lot of room for error, even with new parts. This issue also affects older engines because any change to the engine will affect the relationship of the cam sprocket to the crank pulley. As the chain stretches, the slack is taken up by the tensioner, but that will change the position of the cam. As engines are rebuilt, heads are machined, and any material removed will change the distance of the head to the centerline of the crank, also affecting the cam sprocket position. We have also seen a bunch of cams that develop a twist through the years, so finding the best compromise so the valves open and close when they are supposed to is also a reason to check cam timing.

The procedure involves checking when the intake is about to open (AA marks), and checking when the exhaust valves are just beginning to close (CS marks). Since a Ferrari engine is timed like two 6 cylinder engines, the front cylinder’s valves on one bank is 360 degrees out from the back cylinders, so the valve timing can be checked from front to back. Lining up the cam sprocket bolt holes once the cam is in the correct position involves jumping 7 teeth at the chain sprocket for every degree of movement. It probably sounds as confusing as I’m describing, but makes more sense when you see it being performed.

Although I successfully timed in Yale’s engine correctly for the first time by myself, I knew I needed a lot more practice. When Francois learned how to do this at the factory in the 60s, he repeated the process on dozens of V-12 engines at a time, and then spent the last 50 years working on hundreds of Ferrari engines. We may do this two to three times a year at the shop, so I may never get as good as Francois! 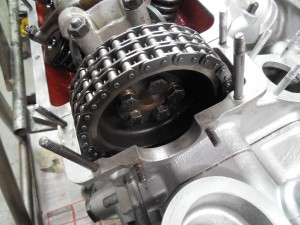 With the cams timed, the bolts were tightened on the sprockets, and I moved onto the next task of the assembly process. 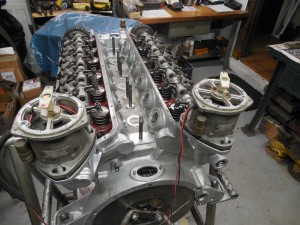 Yale had another shop install “Pertronix” ignition modules on his distributors several years ago. I find these things are a mixed blessing, and I called him to see what he wanted to do.
“I love them, and I would like to keep them.” Is what Yale said when I called.
The problem I had is I didn’t install these modules, and I did not disassemble the engine when the distributors were removed, so everything will have to timed to work properly. Even though the concept of the magnetic pick ups on the Pertronix system is nothing more than a switch, I’ll have to figure out how to trigger them to find the precise moment they trigger a spark event. It would have been so much easier with set of old fashioned points! 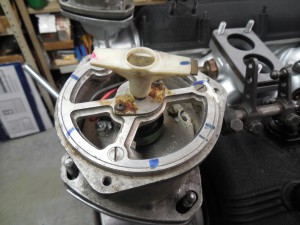 The previous shop made marks on the distributor to show where each spark event should occur, but just like the camshafts, Ferrari allowed many adjustments to precisely align the points in time with the engine. The alignment of these components are much easier to do with the engine out of the car, and even easier if I can statically set the distributors before firing up the engine. I heard you can put these pick ups on a meter to see when they are triggering, but I’ll have to do some more research. 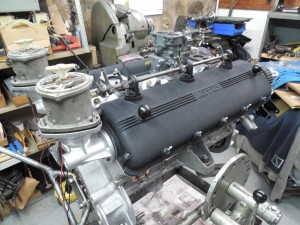 I’m all registered and ready to attend Concorso on Saturday 15th of August and the FCA event on Monday August 17th. Please contact Concorso, or the FCA to register for their respective events.

If you want more information on the car shows contact:

At last count, there will be 19 GTEs and 3 330 Americas! If you have one of these cars, don’t miss the opportunity to join us!