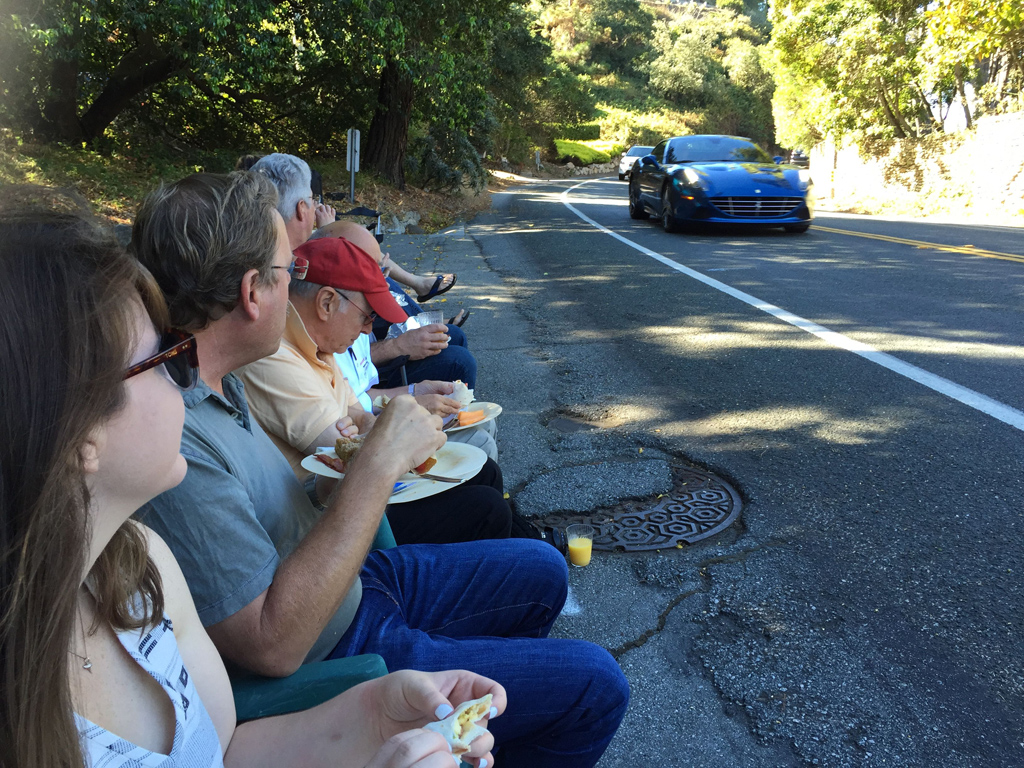 I arrived in Monterey the Wednesday before Pebble Beach weekend, and scrambled all over town to secure tickets, check into hotels, and to start calling all my friends that were arriving into town. The first event was to meet Tom Wilson at a house they rented on Highway 1, just south of Carmel. The house had a spectacular view of the Pacific Ocean and a front row seat of the Thursday morning Pebble Beach Tour at the bottom of its driveway! 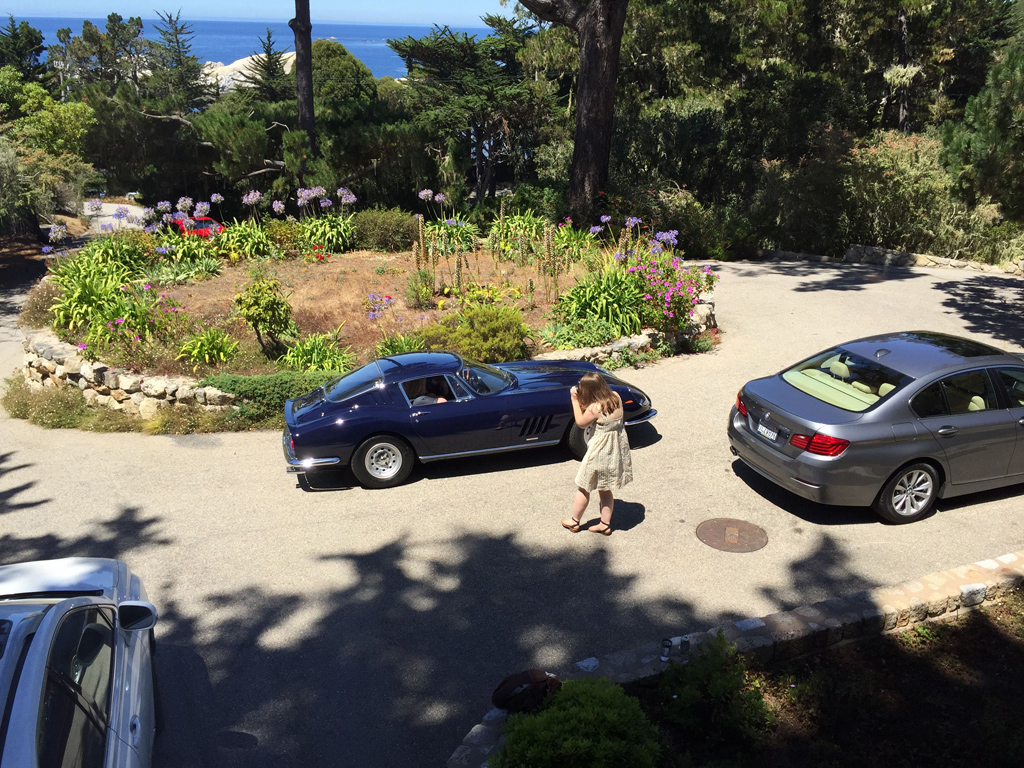 As we were watching the tour, I got a call from one of my customers that owns a  275GTB/4. He brought his car out to Monterey, and was using his Ferrari to get around to all the events on the Peninsula. Unfortunately, the car was missing a little bit and he called me to see if there was anything I could do. Working on a car far away from the shop is always a hit or miss endeavor, but I was willing to take a look, so I asked Matt to bring it by the house.

Tom Wilson’s house guests were all pretty new to the Monterey car scene, so they were very excited to see a Ferrari 275GTB/4 pull up the winding driveway. To give them perspective, the car was worth the same as the cliff top house we were staying in!

I set to work trying to figure out the miss in the engine. I was hoping it would be a simple fix like a loose spark plug wire or bad spark plug, but it wasn’t looking so easy. My attempt to diagnosis the car was made harder with an audience that had more confidence in my abilities than I had! Roadside repairs can often be hampered by what spare parts you have on hand, or not having the correct tool to complete what would normally be a simple task at the shop.

My process of elimination eventually led me to look inside the distributor cap, and there was my problem. A point set spring had broken, and three plugs were not firing. Realizing this fix was not going to happen without another set of points, I started reviewing my options. I knew Francois was at the track, and they would definitely have a spare points set, but I would have to find him and arrange to get them over to Carmel. As I was thinking, Tom Wilson pulled all the spare parts he had for his GTE and found a bag of used points sets. Three sets were broken just like the one I fished out of Matt’s distributor, but we found a set that was still intact! It was not the freshest set of points, but with a borrowed nail file from one of the house guests, we were in business.

I didn’t have feeler gauges to set the point gap, but set it by sight and ear as I spun the distributor in my hand. It was not perfect, but would get Matt up and running for the weekend until I could fix everything properly when we got home.

In celebration of having his car repaired, Matt agreed to take anyone at the house for a ride in his GTB, and there was no lack of takers! 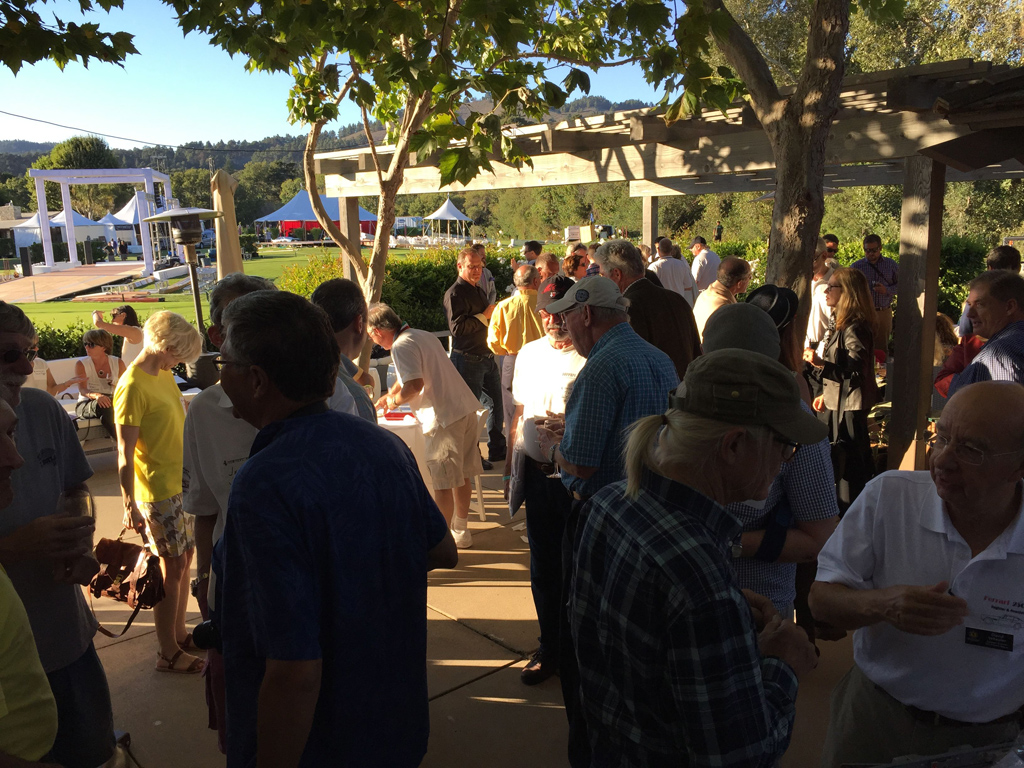 Friday night was my annual Monterey Cocktail Party at Quail Lodge. With easily over 100 people in attendance, I think it has become a destination for many Vintage Ferrari Fans and Owners and I was happy to see so many old friends and make so many new ones. Thanks for coming!