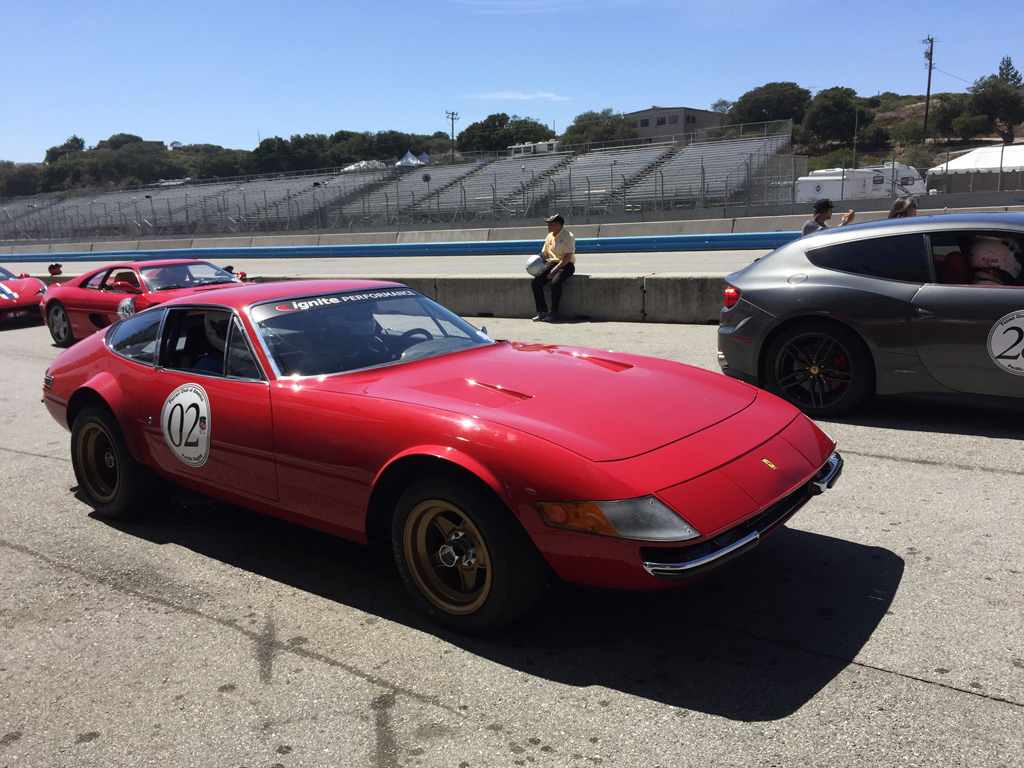 The last and final day for me in Monterey was a track day at Laguna Seca with the Ferrari Club of America. My buddy Bill Bowdish asked if I would like a ride in his Daytona on the track. I don’t think he finished his sentence before I said yes!

Bill owns a bit of a hot-rod Daytona and is a car he has always wanted to have. Real Factory built Competition Daytonas are valued in the millions, but Bill had always loved the look of these cars. A few years ago, he found a good candidate to modify into a car to look and feel like a Comp Daytona, but would cost a fraction of the price. Much like a Shelby GT350 tribute car, he built the car of his dreams. The result was fantastic, with all the personal touches that you couldn’t do with a real Comp Daytona. The engineering of the car was well thought out, and Bill was having a blast putting this car on the track. Having cut his teeth flying fighter jets as a younger man, this Daytona was filling his need for thrills! Thanks for sharing the ride with me Bill! 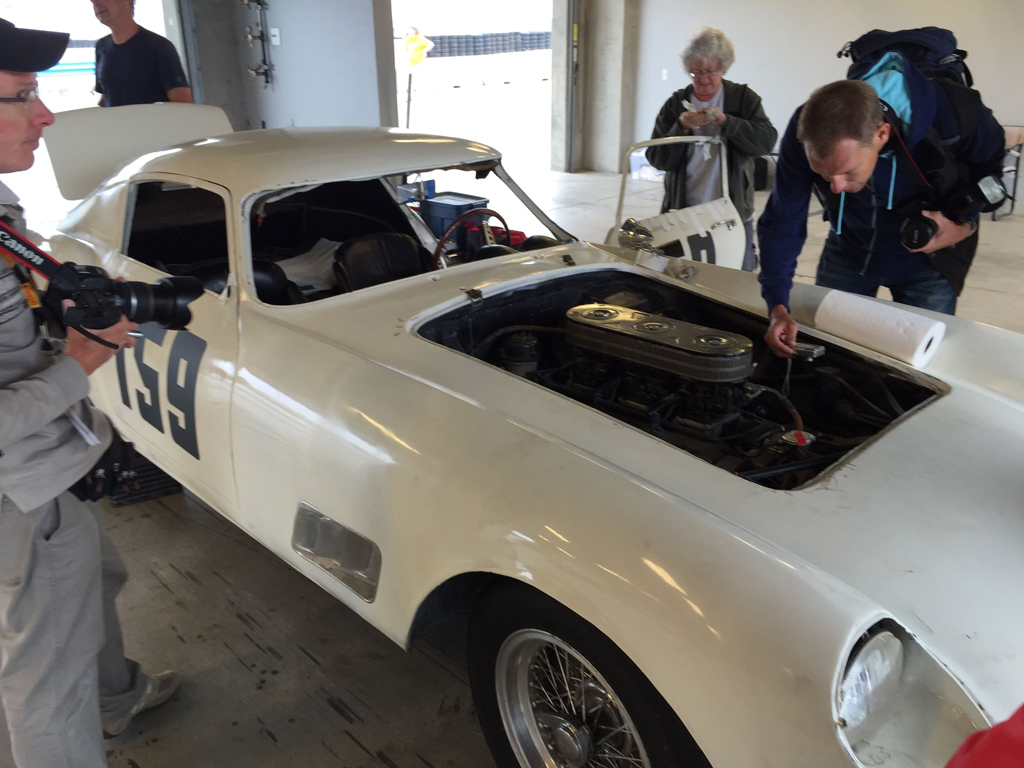 Next to Bill’s garage space was a very special car that was attracting a lot of attention. To the uninitiated, it was a worn out race car with refrigerator white paint and wavy body work, but on closer inspection, it was in the shape of a Ferrari 250 Tour DeFrance! As one looked closer, and the gathering crowd agreed, she was a real one! Valued in the multiple millions, and with this one off the collective radar for decades, there was a bit of a frenzy over this car. 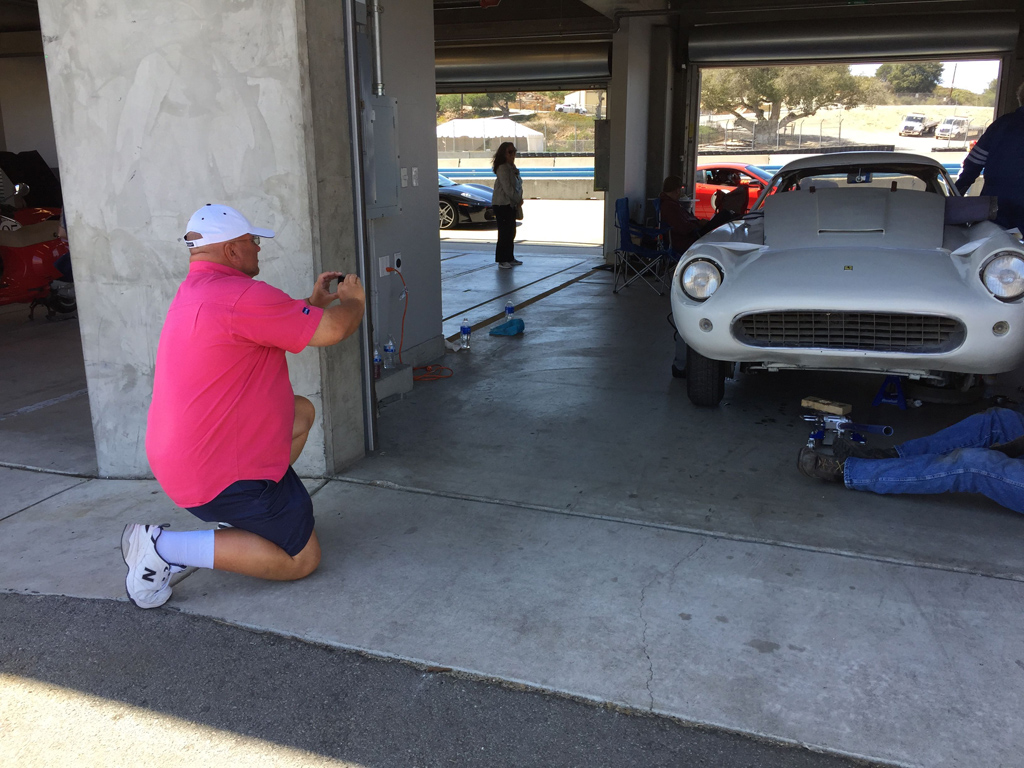 Marcel Massini confirmed this car has been hidden away for many years, and this was the first time it has been in the public eye in anyone’s memory.

I had a front row seat from the garage stall next door watching all the “usual suspects” walking around the car, and “making acquaintance” with the owner of the car. It was like watching sharks circling their prey. All the auto brokers were salivating on the commissions of a 7 or 8 figure sale price, but they first had to secure the sale. Although the long time owner was an old timer from Colorado, he knew exactly what he was doing. He calmly collected the handful of business cards and sat back on his lawn chair and watched.

I waited until the crowds died down before striking up a conversation with the owner. Although I could probably find a buyer for this car, I had no desire to jump into the shark tank. I wanted to congratulate the owner for bringing the car to the track, and simply talk cars. When I introduced myself, it didn’t take long for the owner to recognize my name and tell me he knew all about this website! I was glad I was not going to be perceived as another circling shark, and asked if he was really going to sell this special car. He and his wife were indifferent. Yes, it was a lot of money, but “it’s like selling off one of your kids!”

I wished them luck and left Monterey not knowing how to feel. This strong market has really changed the way we see and own these cars. I’m still having fun owning my Ferrari, but I seem to be having a paradoxical effect to the rising prices!