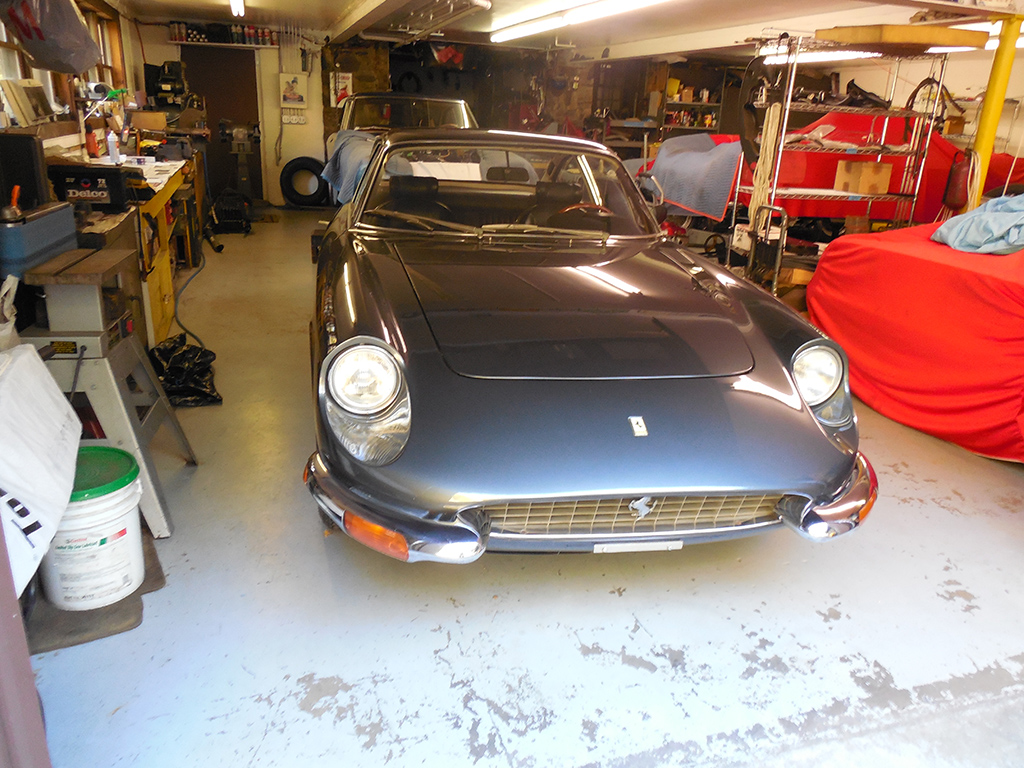 I was pretty bummed out last week with the brakes on the 330. Waiting for repair parts to arrive, I decided to bring in another car into the shop. About a month ago, I got a call from an owner about a fuel leak in his Ferrari. His 365GT 2+2 stated leaking fuel from the back of the car, and the catch tray was not really keeping up any more! We were jammed with work at the shop and couldn’t take his car in immediately, so I asked him to siphon the fuel out of the tanks, and wait for us to get his car in to look at the problem. 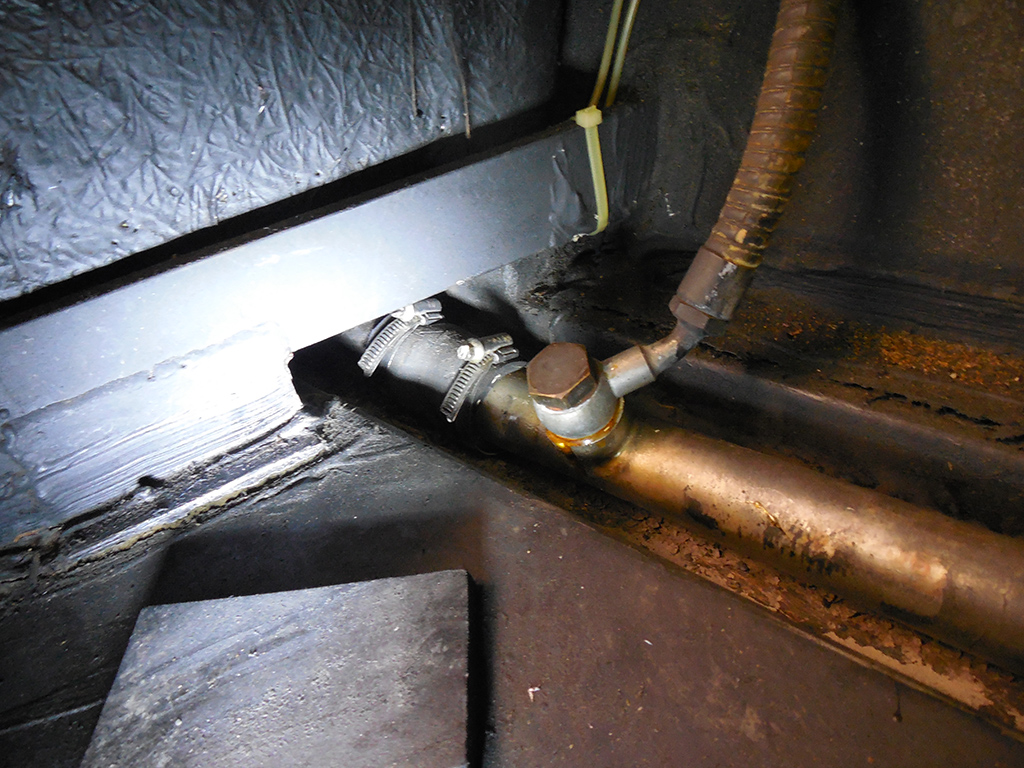 The common fuel leaks on these cars is in the soft rubber hoses that fit between the two rear fender mounted gas tanks. The rubber deteriorates over time, and sometimes the alcohol in today’s modern fuels seems to accelerated the degradation. 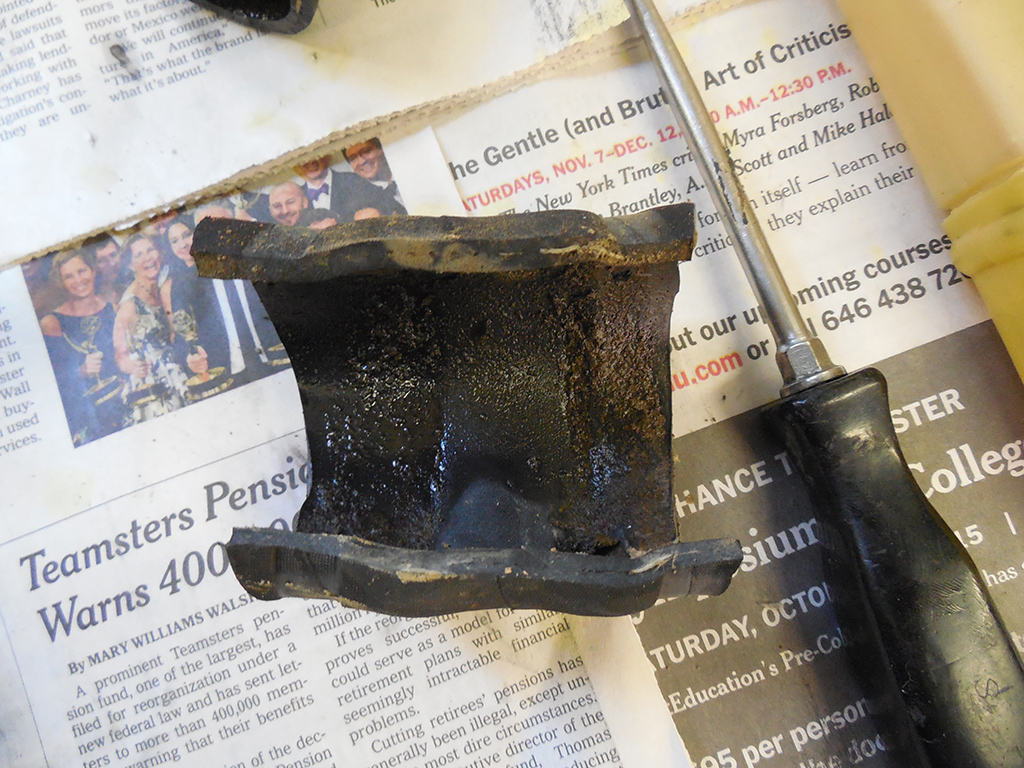 After cutting open one of the hoses, I could see the hose was pretty corroded, and installed a new set of hoses. 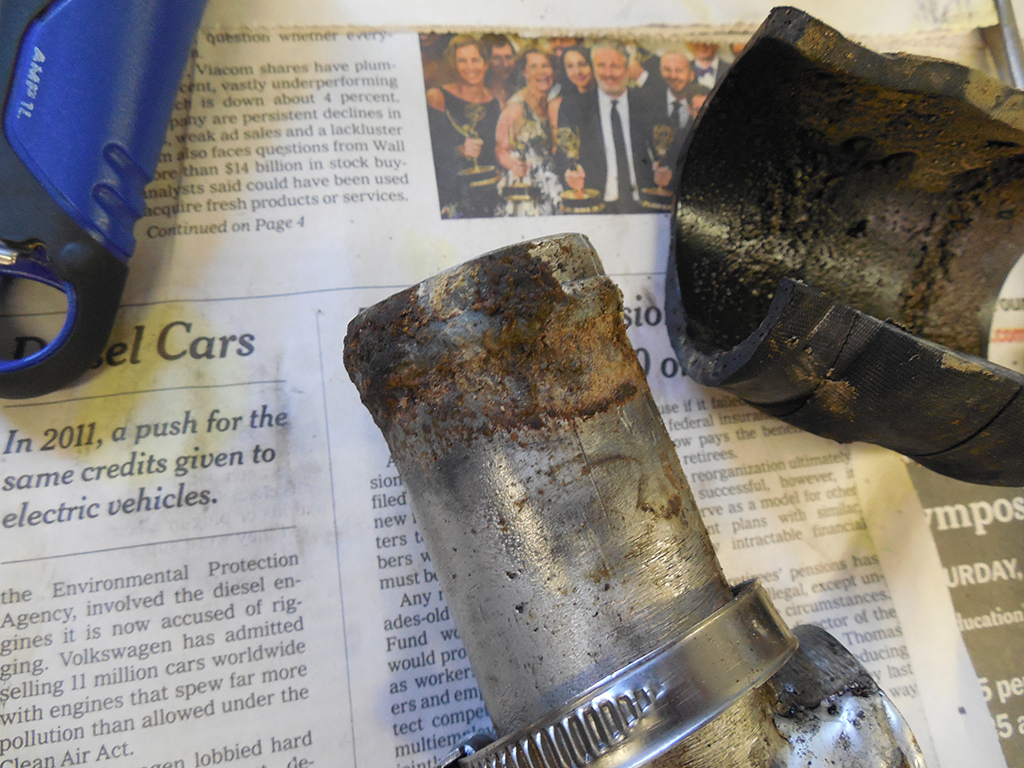 The aluminum bridge pipe was also cleaned up so the mating surface with the hose would be nice and smooth. 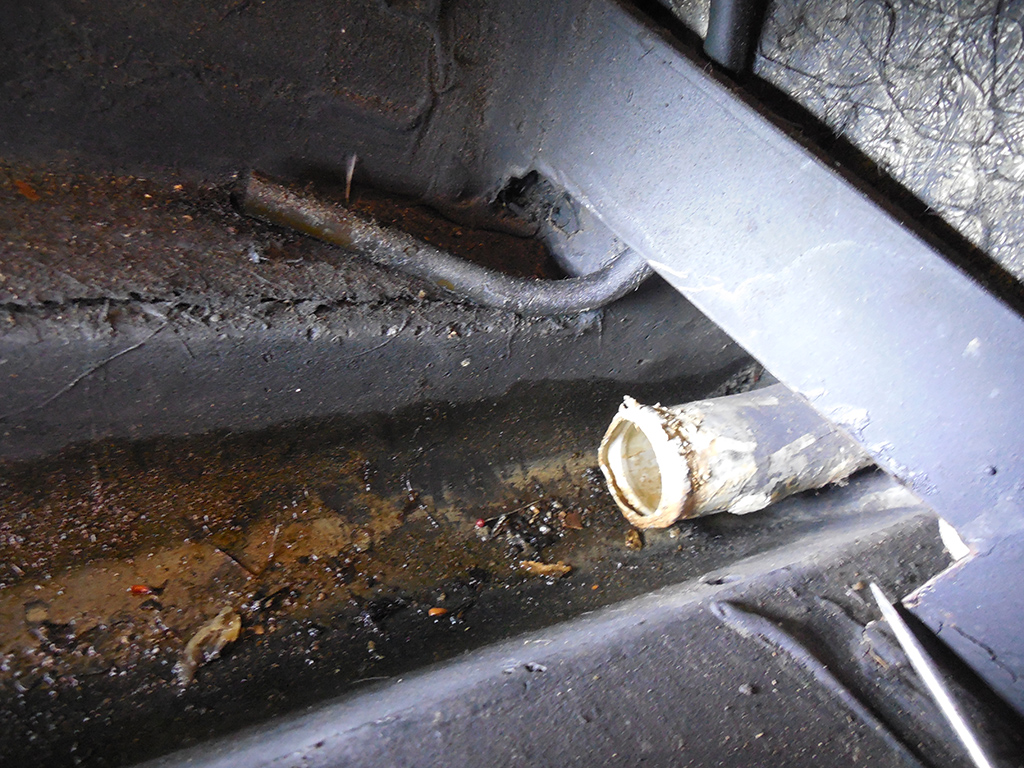 I cleaned the fittings to the tanks, and vacuumed all the accumulated debris out from the bottom of the trunk. 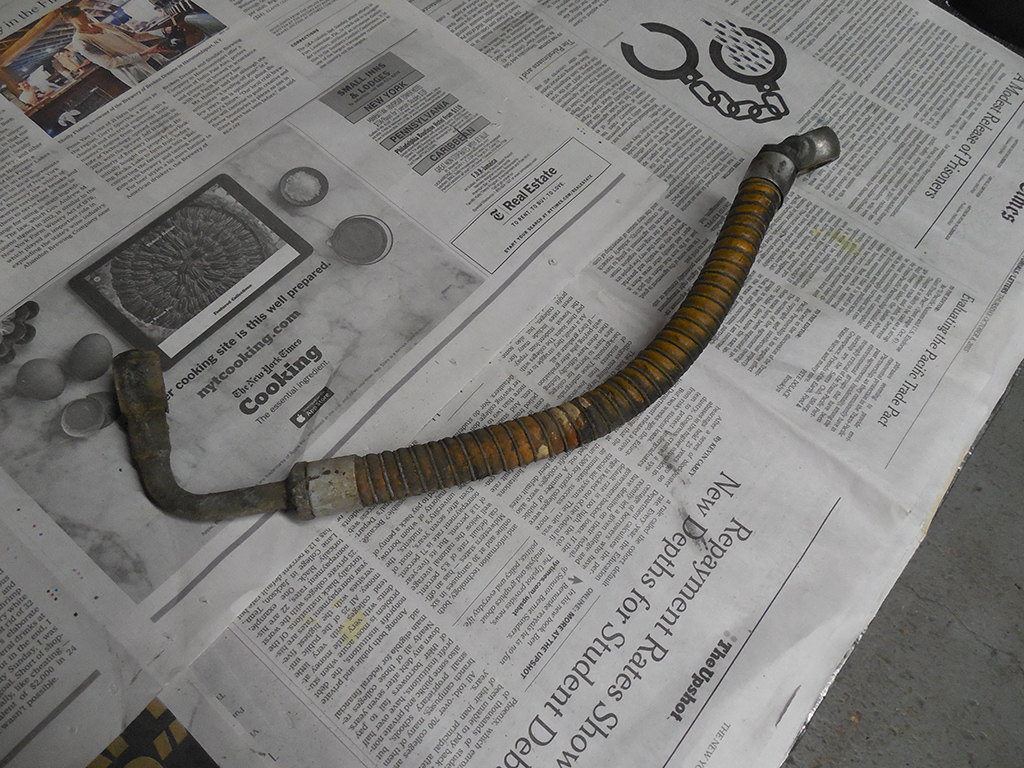 Looking at the yellow hose coming off the bridge pipe, I could tell it had never been changed, so now was a good time to put a new one in. 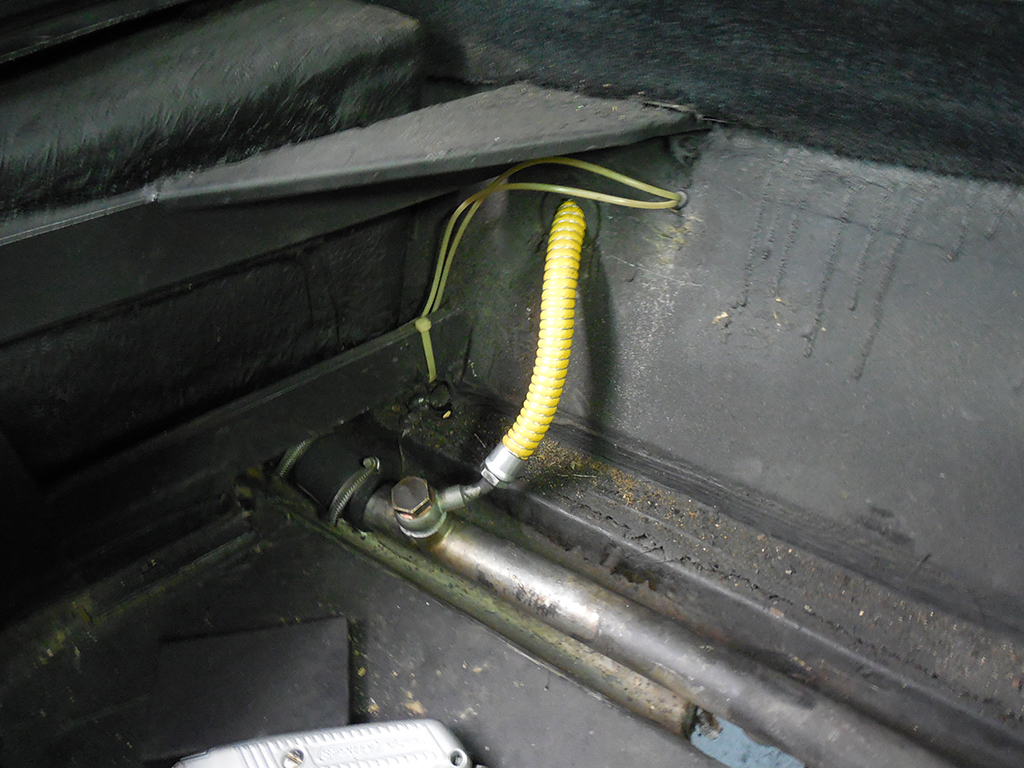 With all new soft lines installed, I filled the tank with some fuel. It looked good for about 5 minutes, but I soon found a trail of fuel coming out of the left tank. Damn! 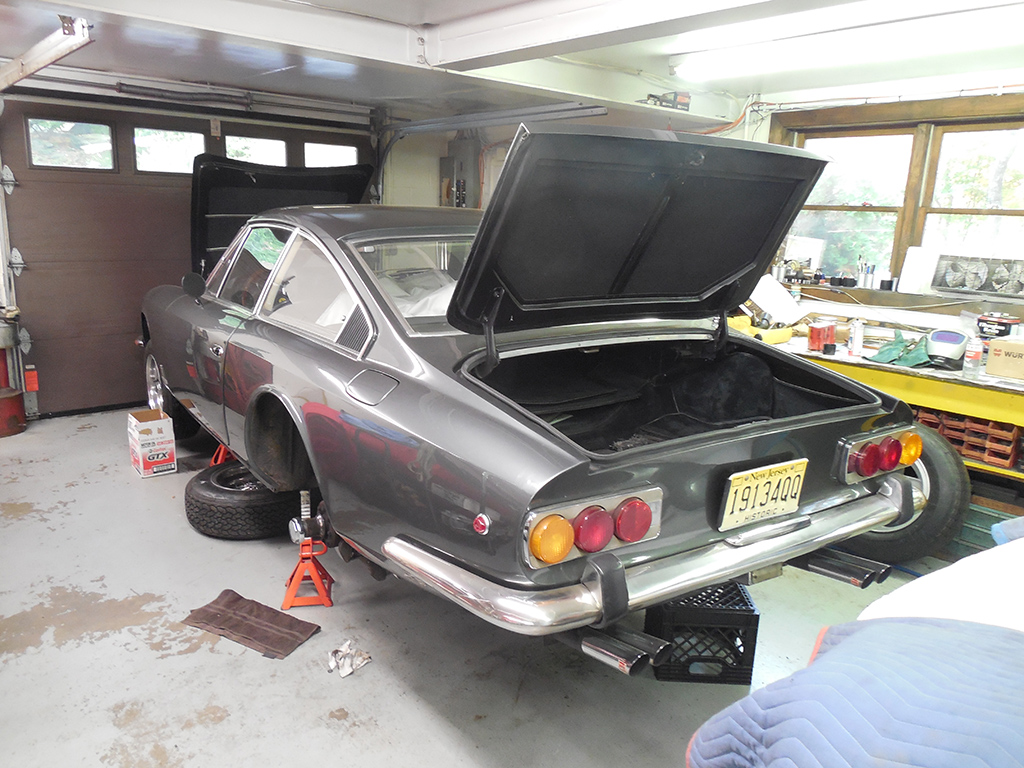 I gambled that I could bring this car in, fix the fuel leak in a day or so, and send it on its way home, but with my luck, that wasn’t going to happen. The left tank was leaking and would have to come out to investigate further. Now I can’t even get back to the 330’s brakes until I sort the fuel issue with this car! 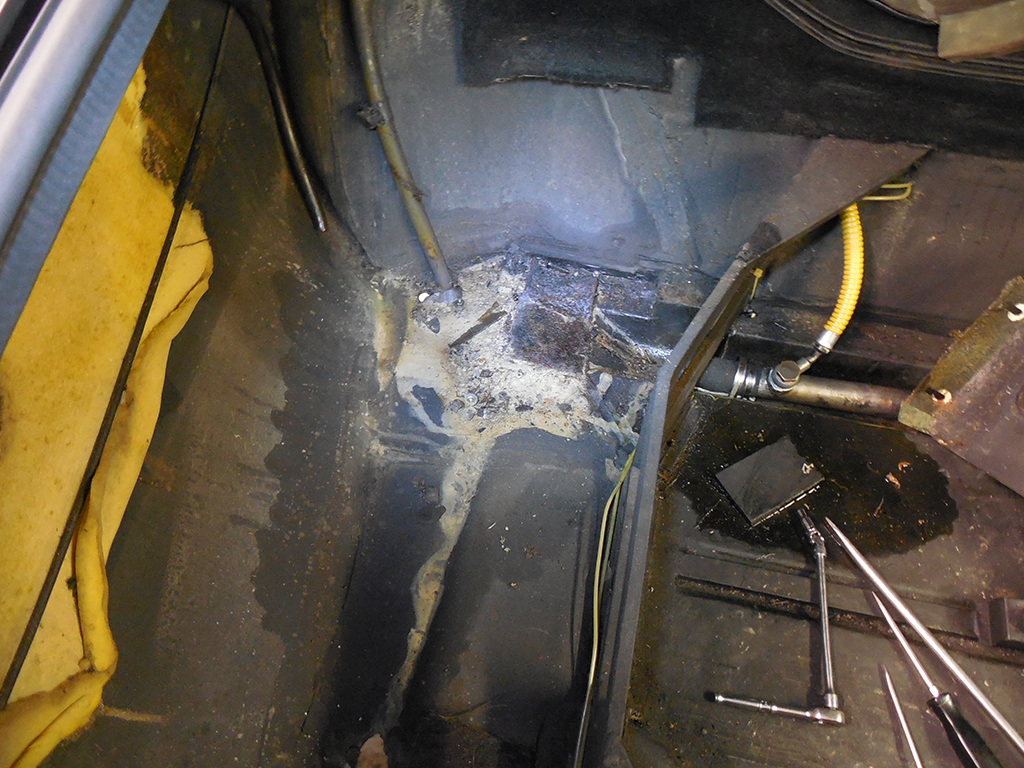 After pulling the tank, I could see there was some corrosion at the bottom of the trunk. Through the years, the insulation absorbed some of the moisture and acted like a sponge, trapping water next to the tank and trunk floor. 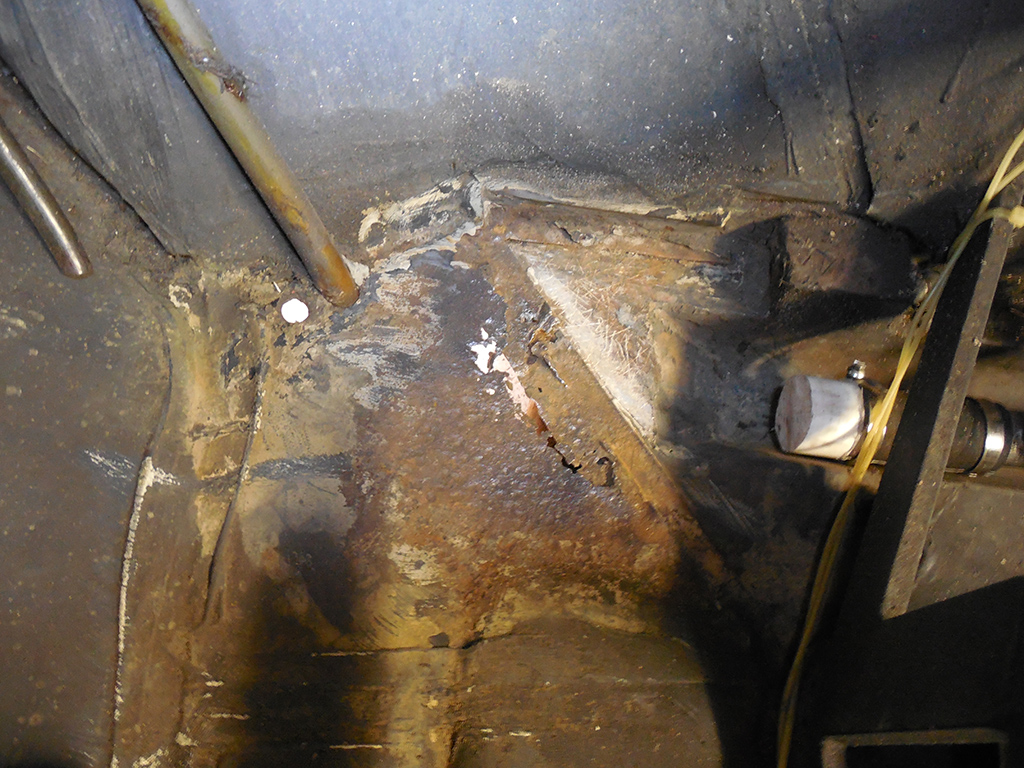 The rust wasn’t too bad, but would have to be patched to keep the water from getting in again. 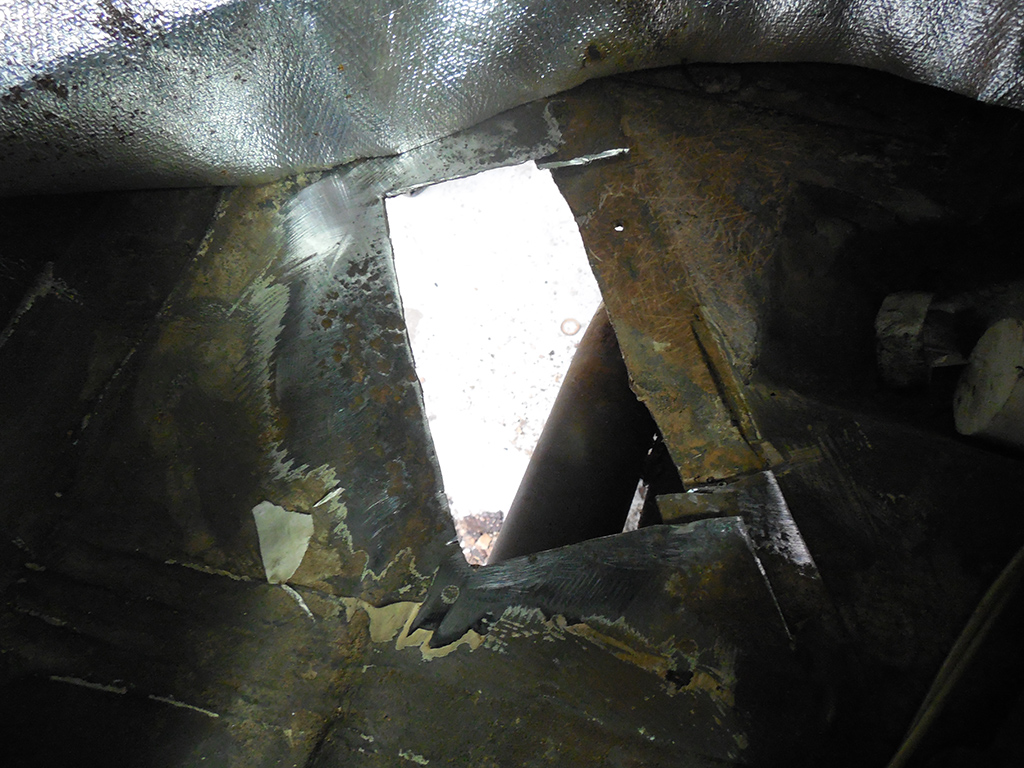 As always with rust repairs, the hole is always larger than when you expect, but I carefully cut away the thin sheet metal and welded in a patch. 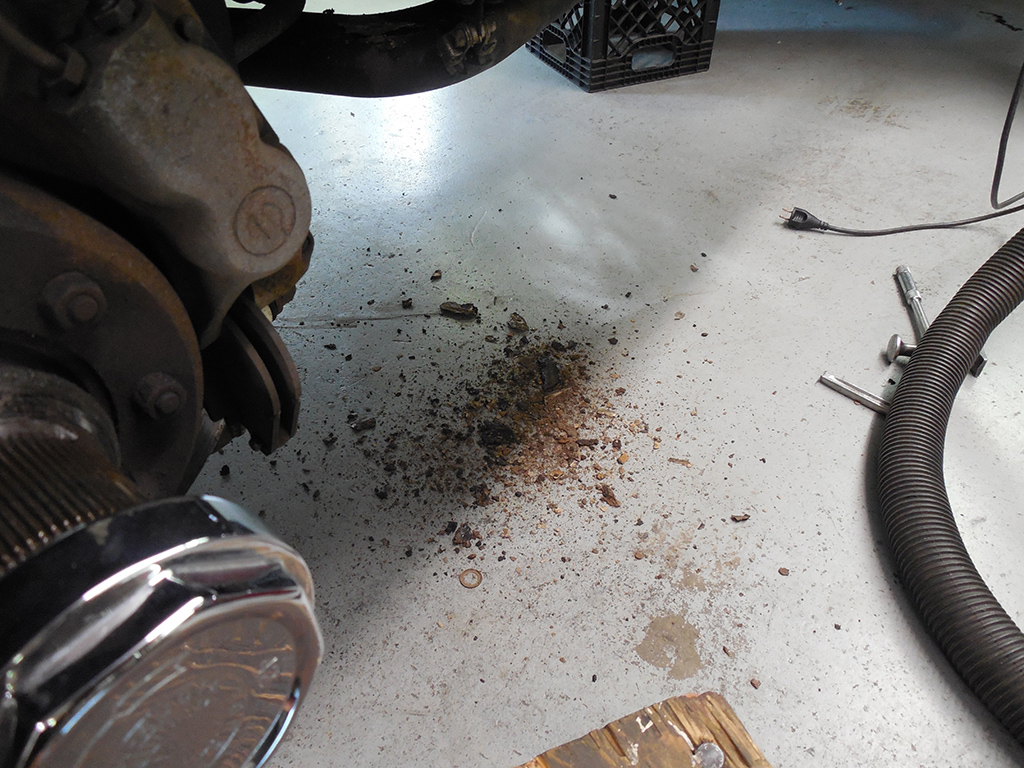 It was a messy day of cutting, grinding, welding, and more grinding. 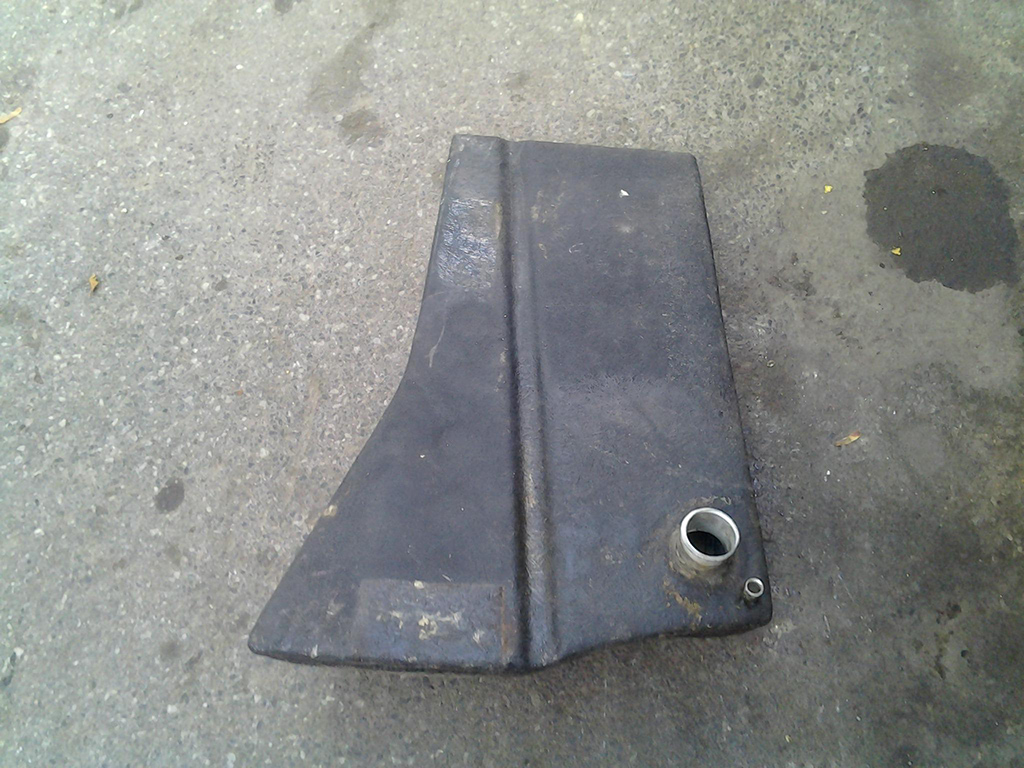 Between repairs on the trunk floor of the Queen, I took the gas tank down to my radiator shop to have them look for leaks. This tank was not looking good, or rather sounding good, as I could hear at least one or two baffles inside rattling around. 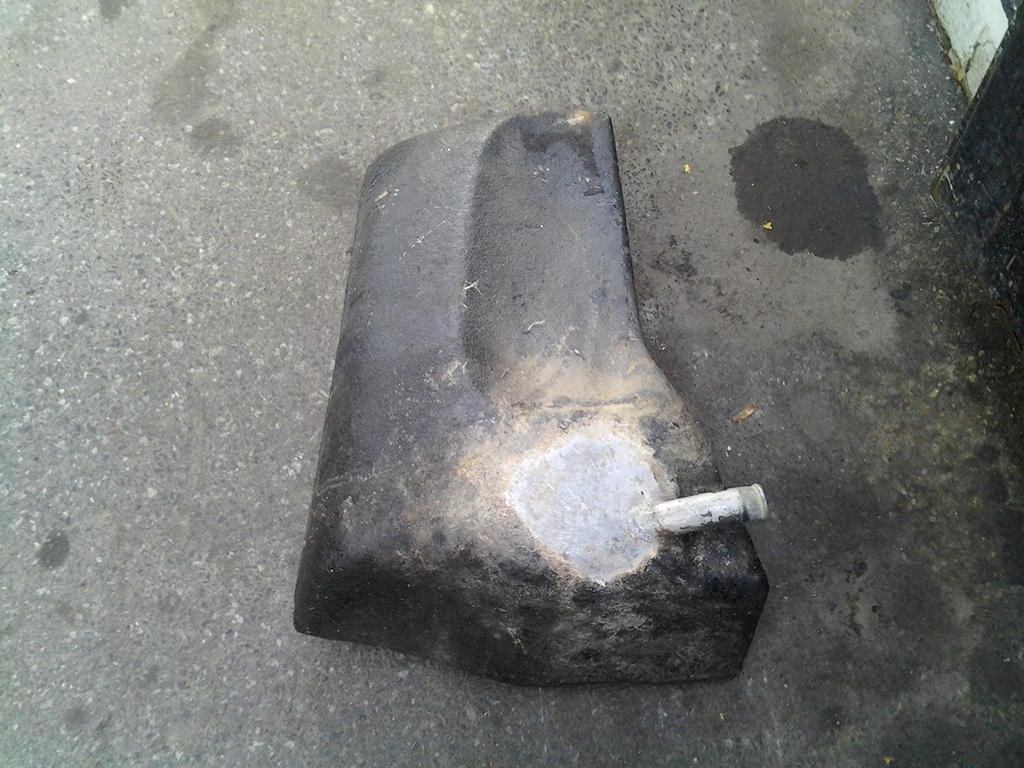 It was pretty obvious where the leaks were going to be, as the bottom of the tank was showing signs of corrosion. After grinding away the fiberglass cover, they uncovered several holes in the aluminum tank.

My radiator shop used to have a welder to repair these tanks, but he no longer wants to weld on fuel tanks. The risks are obvious, but there has to be solution! About a year ago, I had a similar problem with a 365 Fuel tank, and my machine shop welded up the hole, but that was one pinhole leak. I knew this repair was going to be a little more involved. I’m either going to have to repair this tank or find a replacement, and either prospect is going to be challenging!

I have calls out to all my usual suspects, so let’s hope something turns up. As always, I’m open to suggestions!…and HELP! 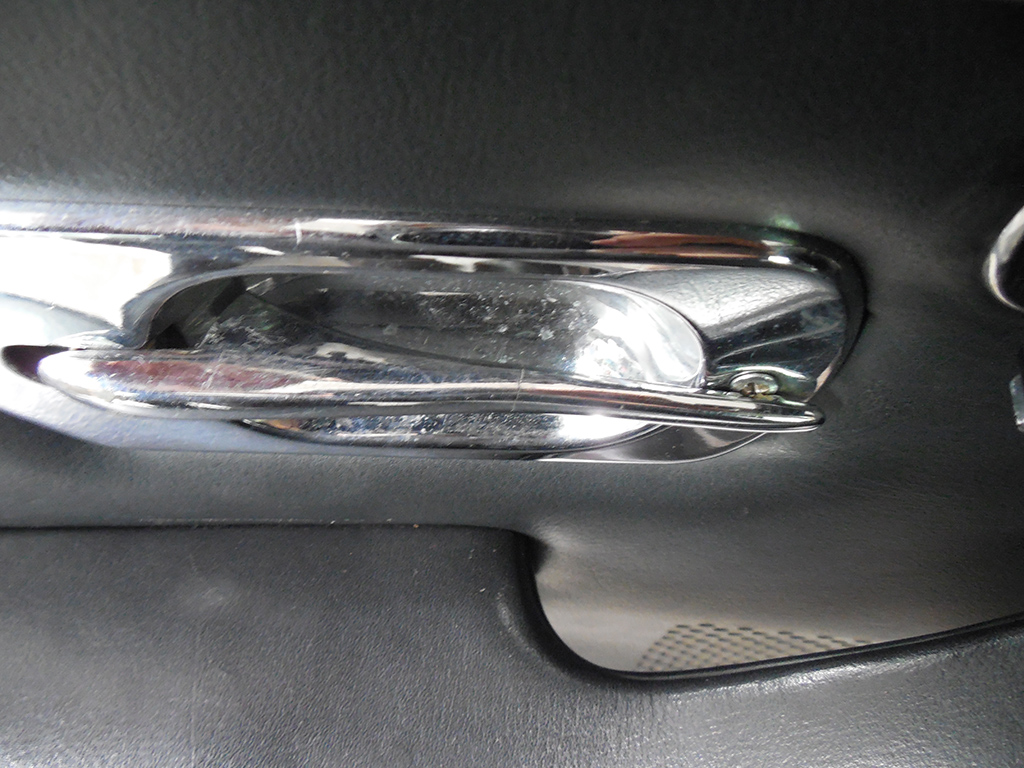 With a dead 365 at the shop, I made use of the time fixing a couple small items on the owner’s to-do list. Last winter, I saw the inner door handle starting to crack. These inside door handles are very fragile, and I warn my customers with 330s and 365s to pull these handles closer to their bases and not let them snap back in place, so not to fatigue the weak metal handle. 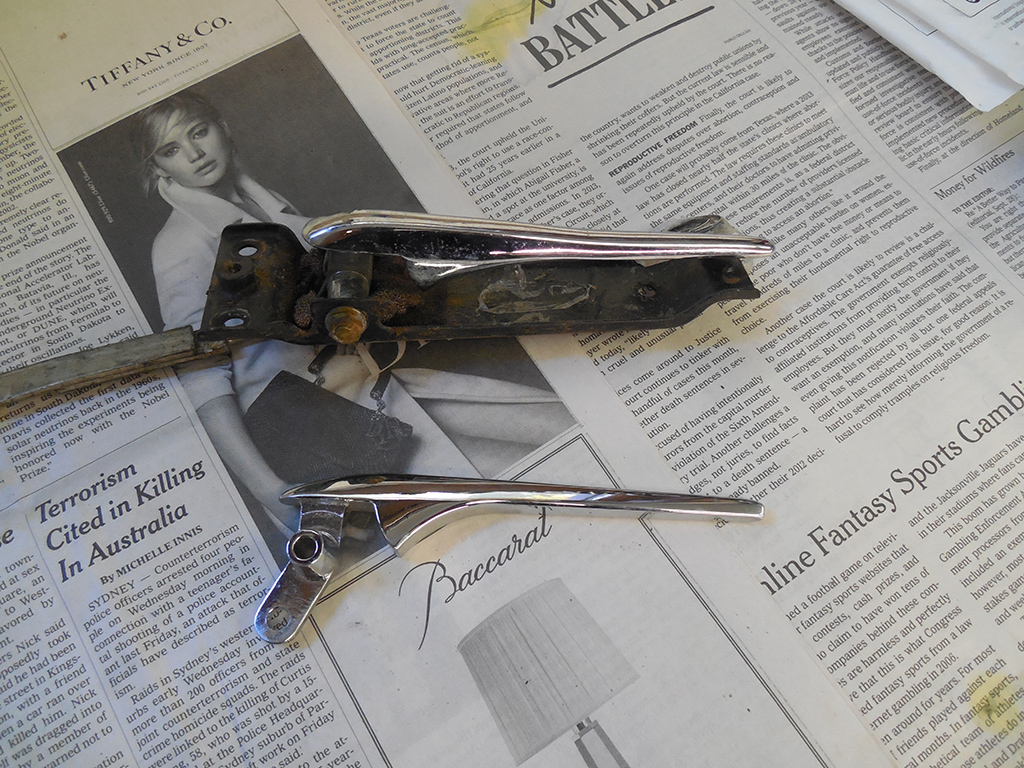 Aron managed to get one from a particular Southern Californian  collector of Ferrari parts, so I took the door panel off to disassemble the door handle. 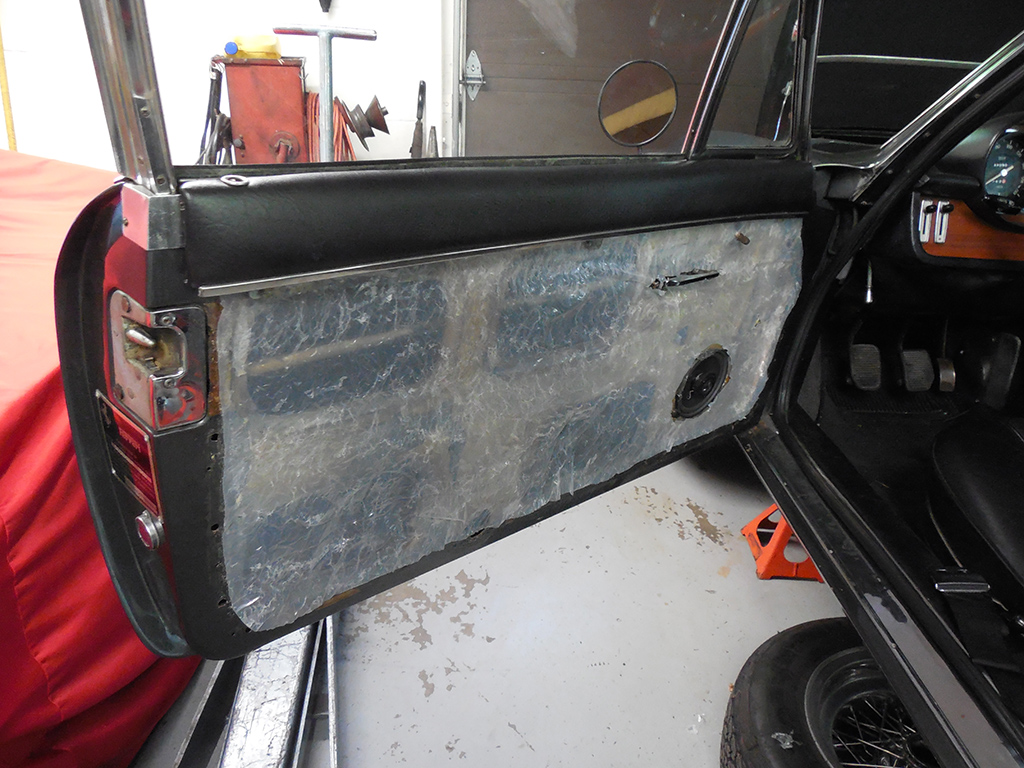 While I was in there, I replaced the old torn vapor barrier with a new one. 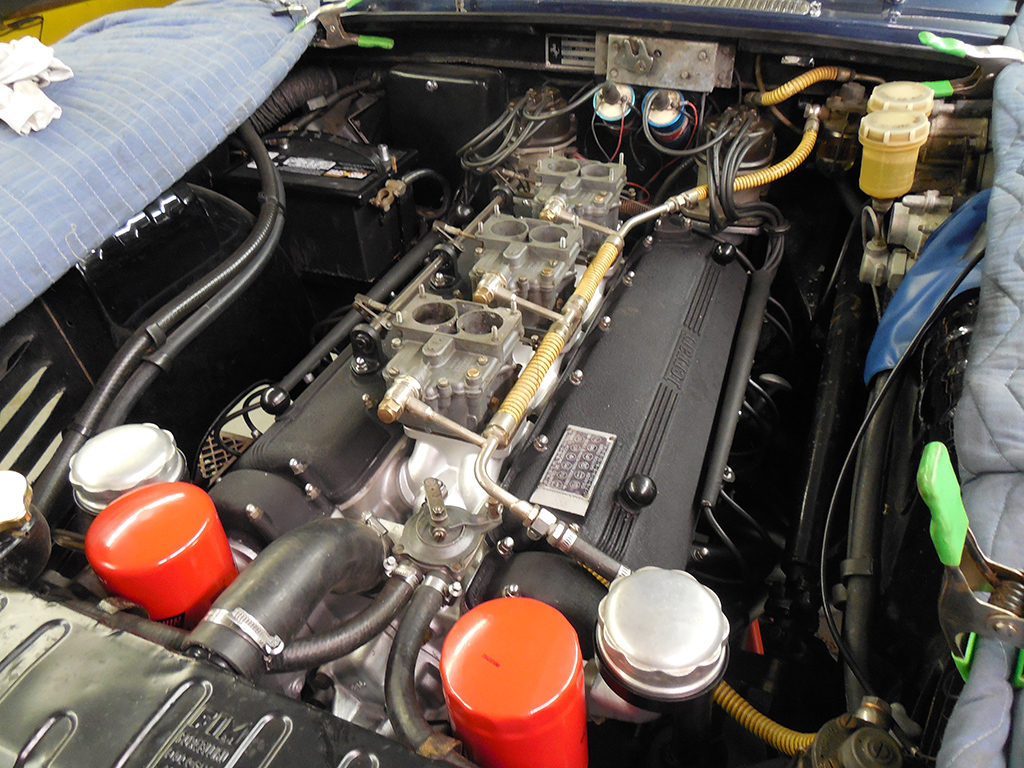 Trying to keep moving ahead on other projects, I wired up Yale’s 330 engine, and fired her up before installing the transmission. If there were any problems with the engine, it was going to be easier to remove it now, than taking the transmission out. Luckily, it fired up at first crank. I’ll have to fix some minor fuel leaks on the fuel rail, but the Pertronix was working, and it looks like it’s roughly timed correctly. At least I’m making progress on one car!