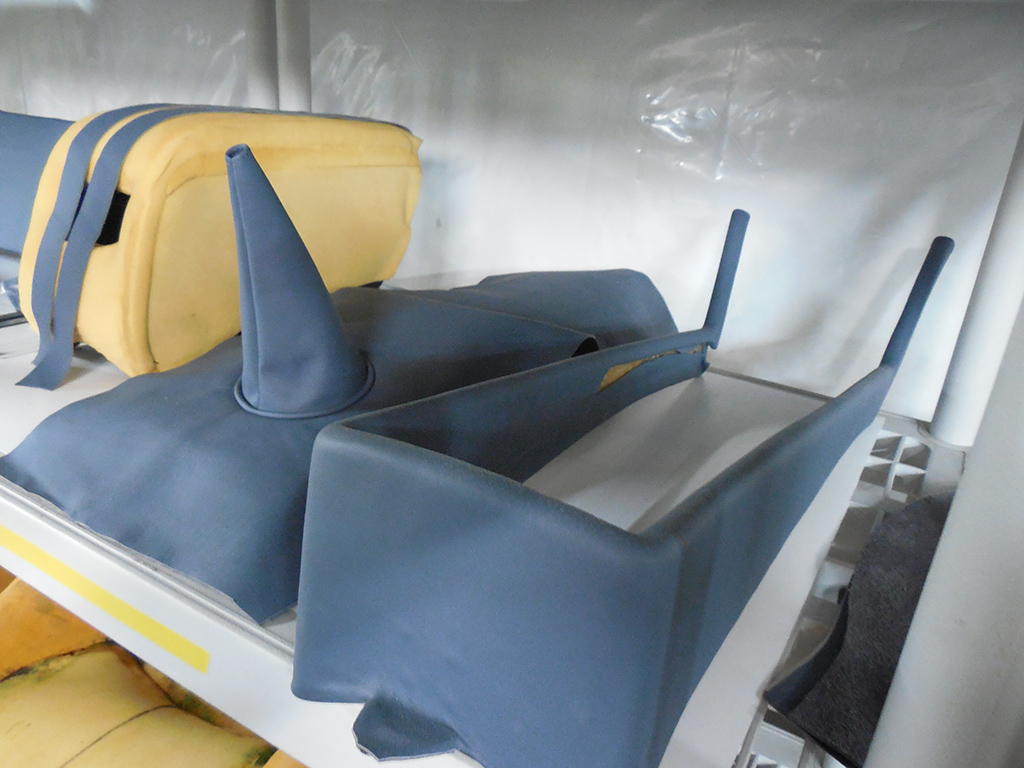 I stopped by my upholsterer’s shop to check on the progress of the interior restoration on a SII 330. All the pieces have been stripped of their old leather, patterns were made, and new leather is getting installed. 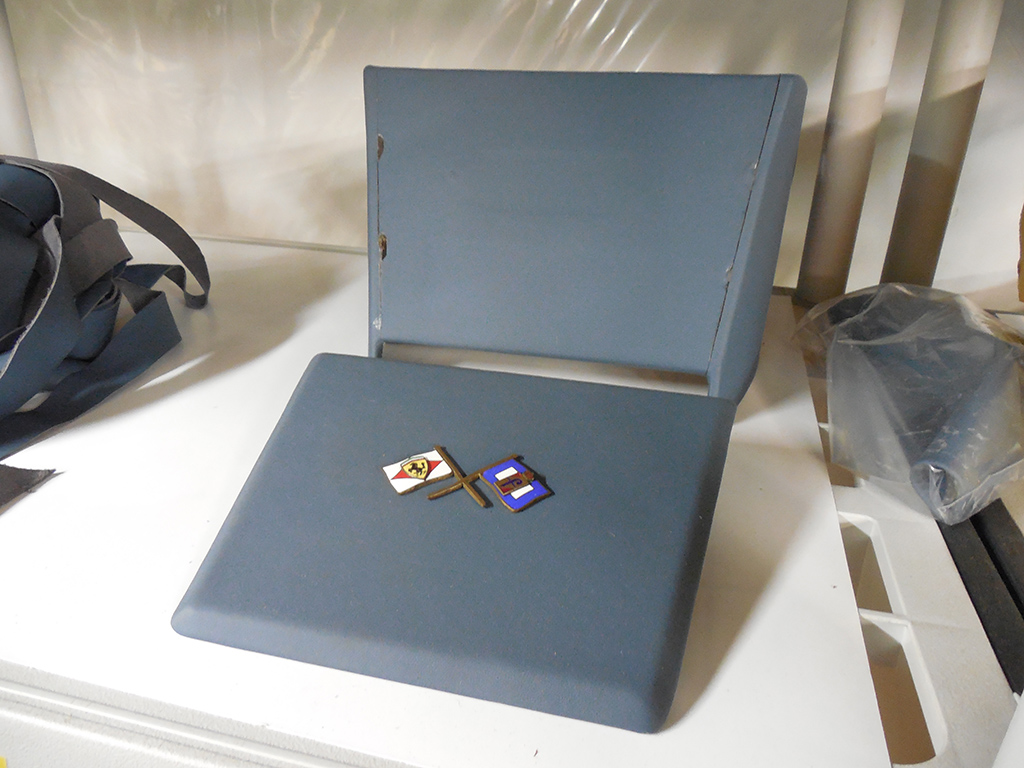 With a natural product like leather, care has to be taken choosing which pieces of the cow hide gets used for which surfaces of the interior.. Scars and blemishes in the skin can be discarded, but the smoothest nicest pieces are set aside for the high profile areas. 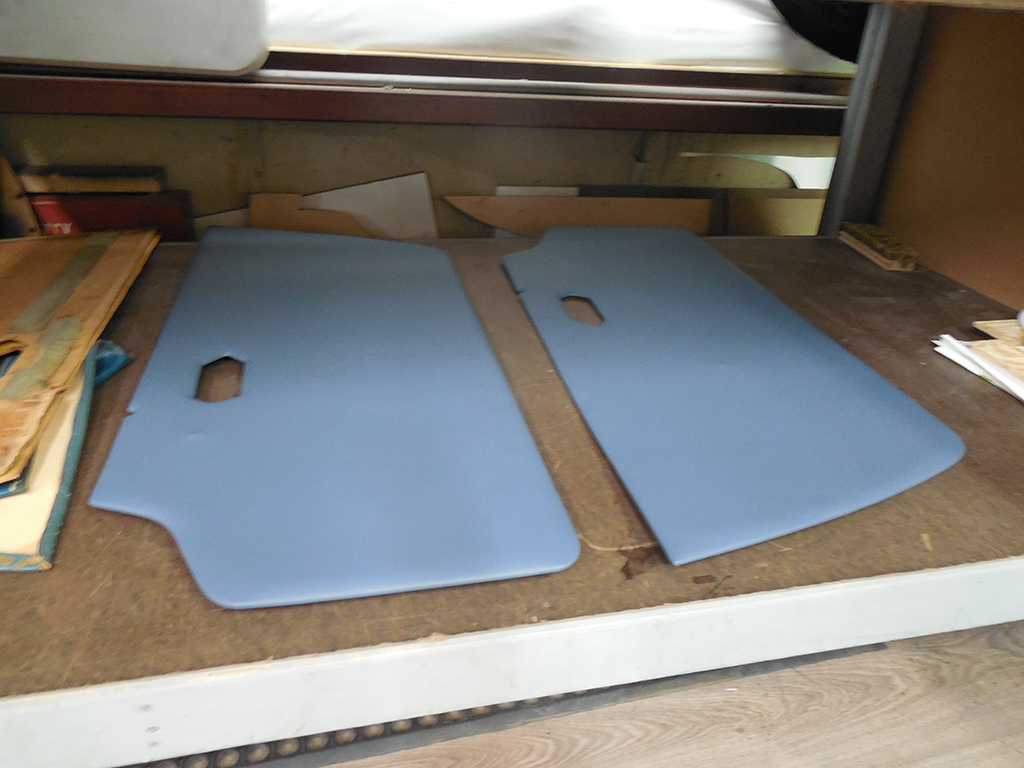 The owner and I spent some time selecting the right shade of blue for this silver car because the original blue leather interior was dyed and not as nice as the original color. We managed to find a good match that worked well with the silver, and now that I see it in larger pieces instead of little color swatches, I’m very happy with the choice we made. 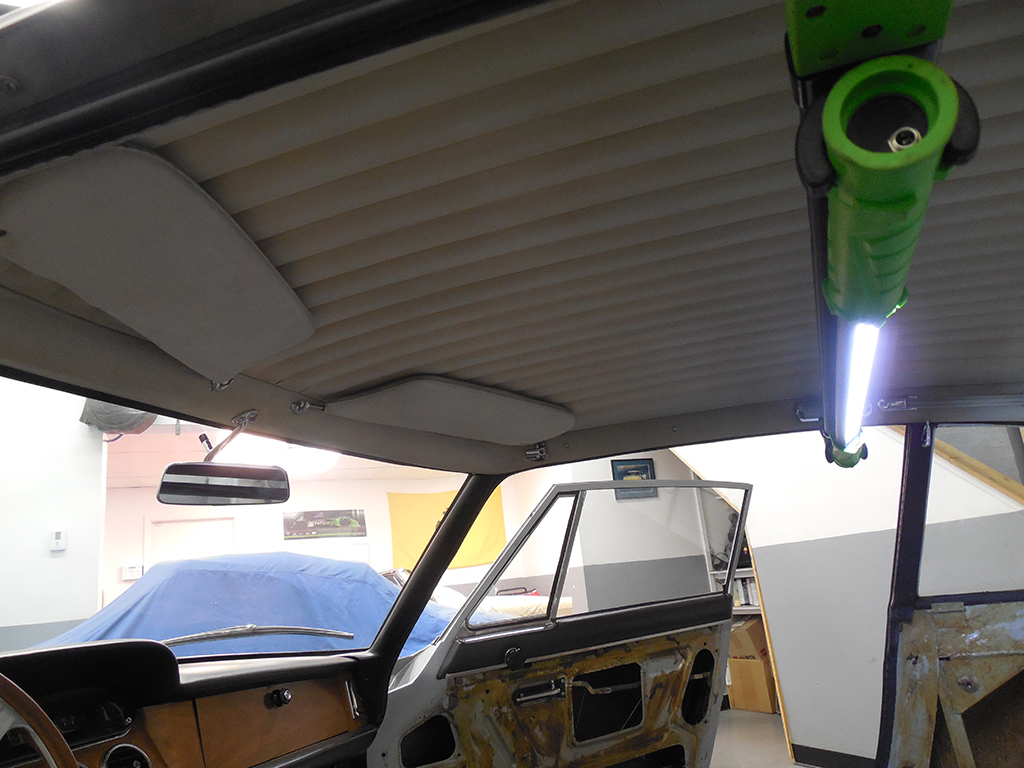 The headliner on this car will not be done because I think it’s in good condition. We will try to clean some of the staining in the corners, but I didn’t think there was a need for a new one. 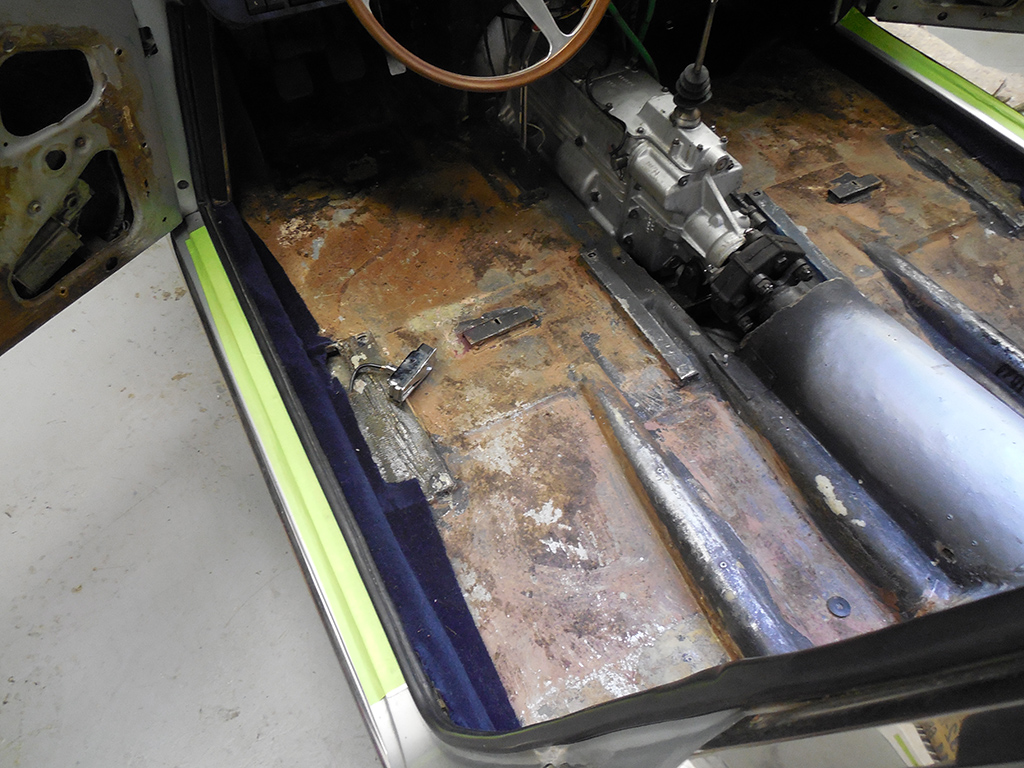 The carpets were in great shape as well so we’ll be keeping this in the car, but we’re definitely going to do something about the insulation. The floors on Vintage Ferraris get notoriously hot because of the exhaust system. The mufflers are located directly under the passenger compartment and when they heat up, it’s like sitting on a pair of radiators. We’ll make sure there is as much heat resistant insulation hidden under the carpets that we can fit! 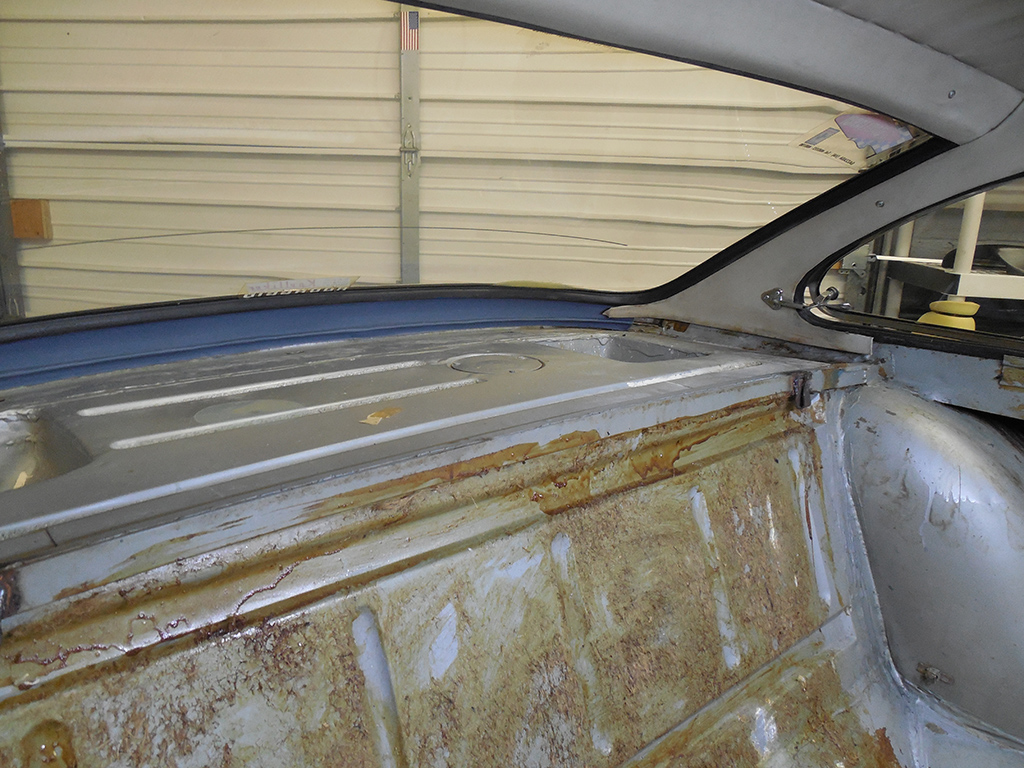 Other panels will also be getting insulated to deaden some of the noise and resonances inside the car.

Back at the shop I installed Yale’s engine back in his car a couple of weeks ago, and wanted to start it up to check everything was operating properly before installing the transmission. 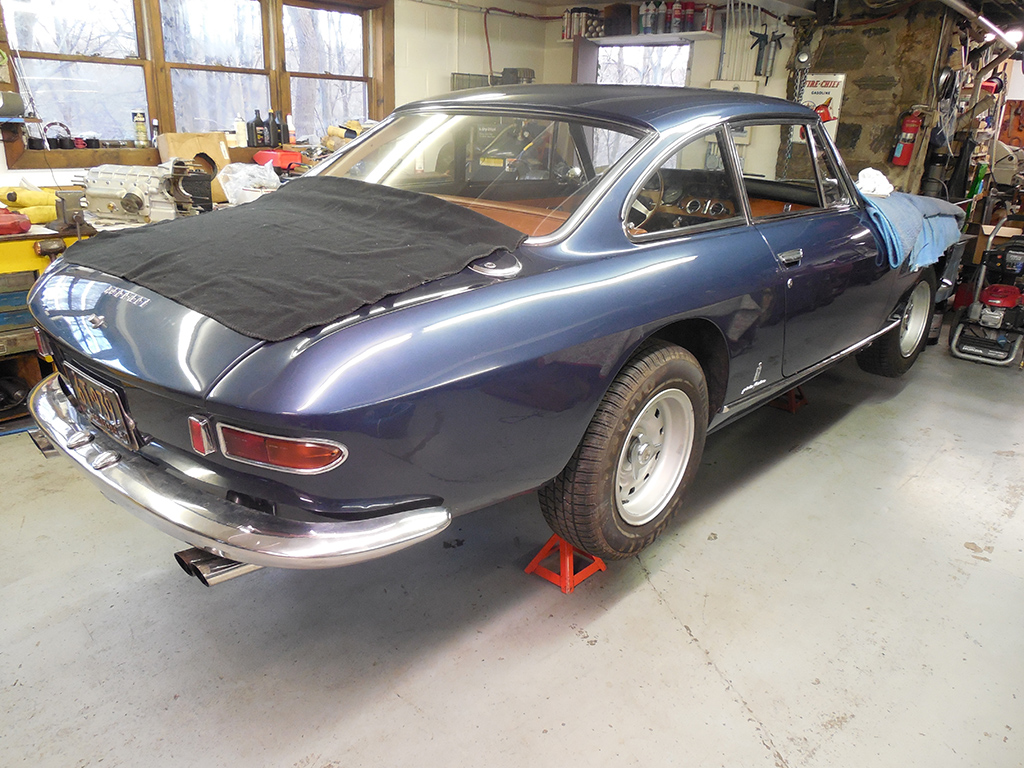 She fired up immediately and idled well, but after a few minutes of running, large plumes of smoke started billowing out of the back of the car. Francois and I shut everything down and started looking for a problem. Our first thought was it a bad head gasket or a failed internal seal. Even though we hadn’t installed the transmission, the thought of pulling this engine to address a bad gasket was pretty disheartening. 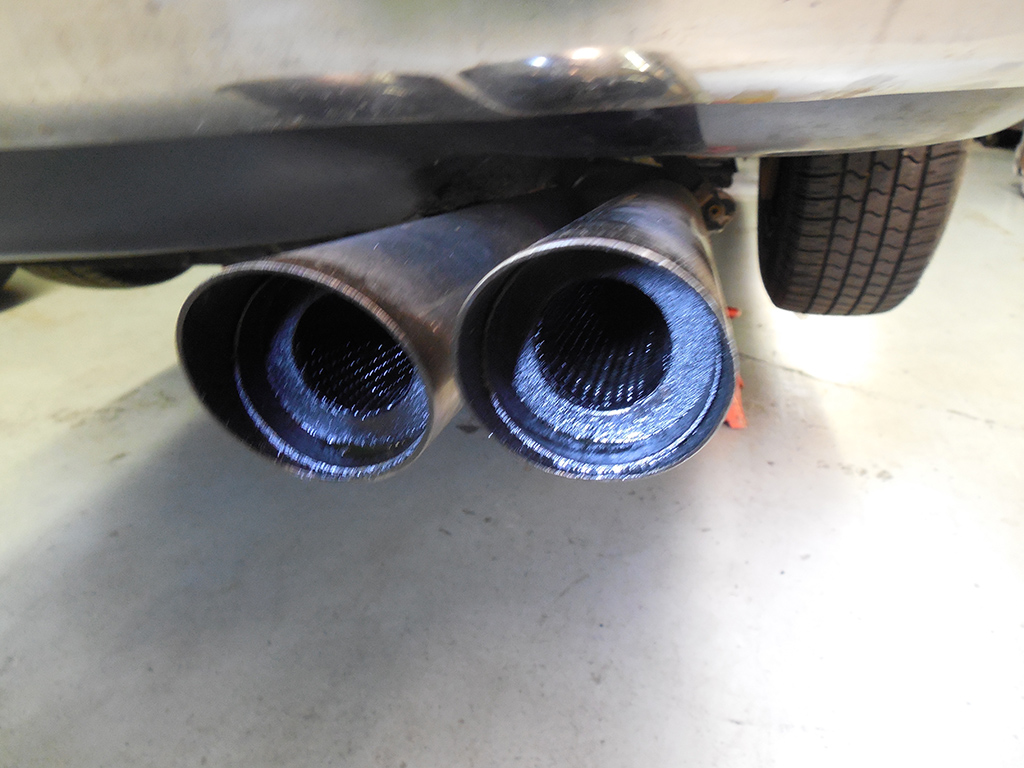 The oil and coolant looked good in their respective areas, and there was no signs of mixing, but there was an oily, smoky exhaust coming out of the back of the car. We pulled the plugs and found them to be OK, but where was this crap coming from? The next step was to pull the header to take look, and before I got too far, we realized the problem.

We went back to the parts that came out of this engine when we got it and found the broken piston came from the 1/6 bank, the same side that was smoking. Since everything was dry inside the engine, we soon realized the source of the smoke. When Yale’s engine previously broke, it ran with a hole in a piston for a little while before it stopped completely. Oil and coolant was ejected out of the header and into the exhaust system, saturating the packing inside of the muffler. When we fired up the rebuild engine and sent hot exhaust gas through the mufflers, the oil and coolant heated up and caused all the smoke! 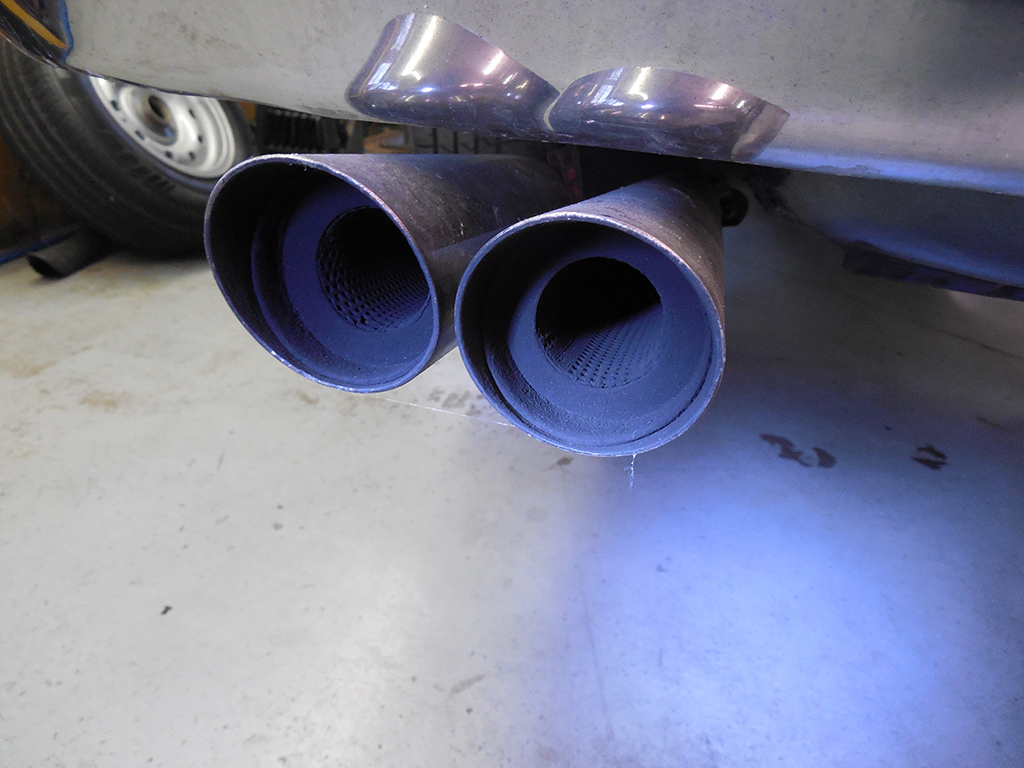 The left side of the exhaust was dry as a bone. It was a pretty big relief to know the engine could stay in place, and I could move forward with the assembly process. Whew! 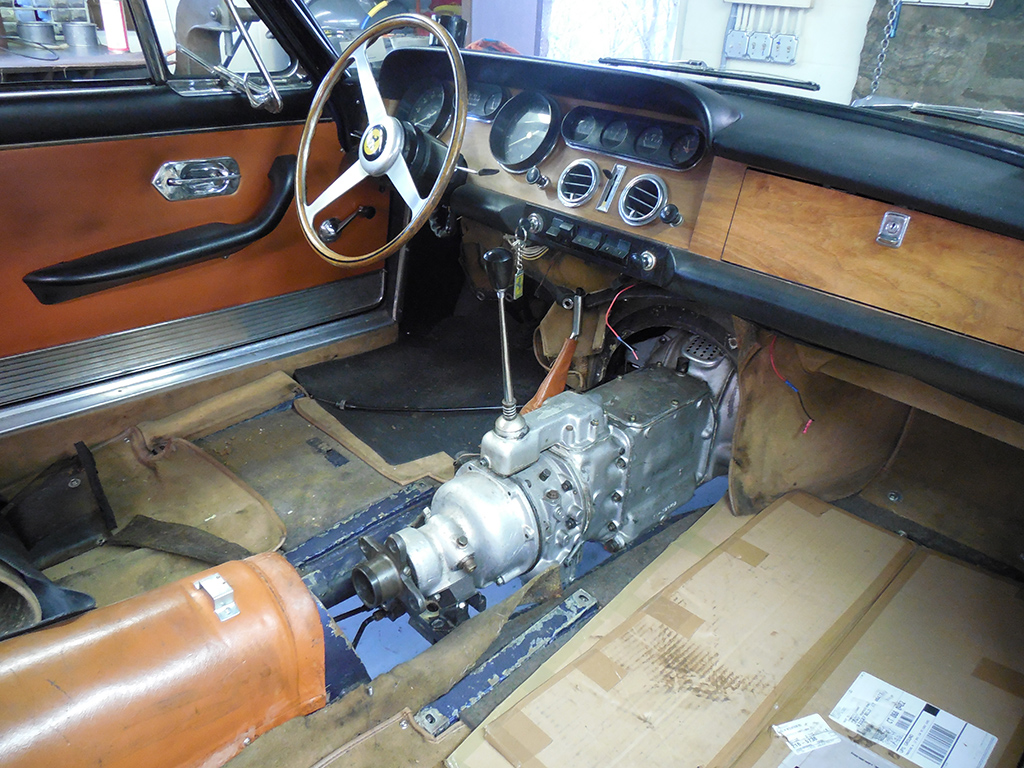 The next step was to install the transmission. It looks like the rear transmission mount is not correct in this car, so I’ll have to order a new one before I bolt the driveshaft to the tail shaft, but we’re moving forward!