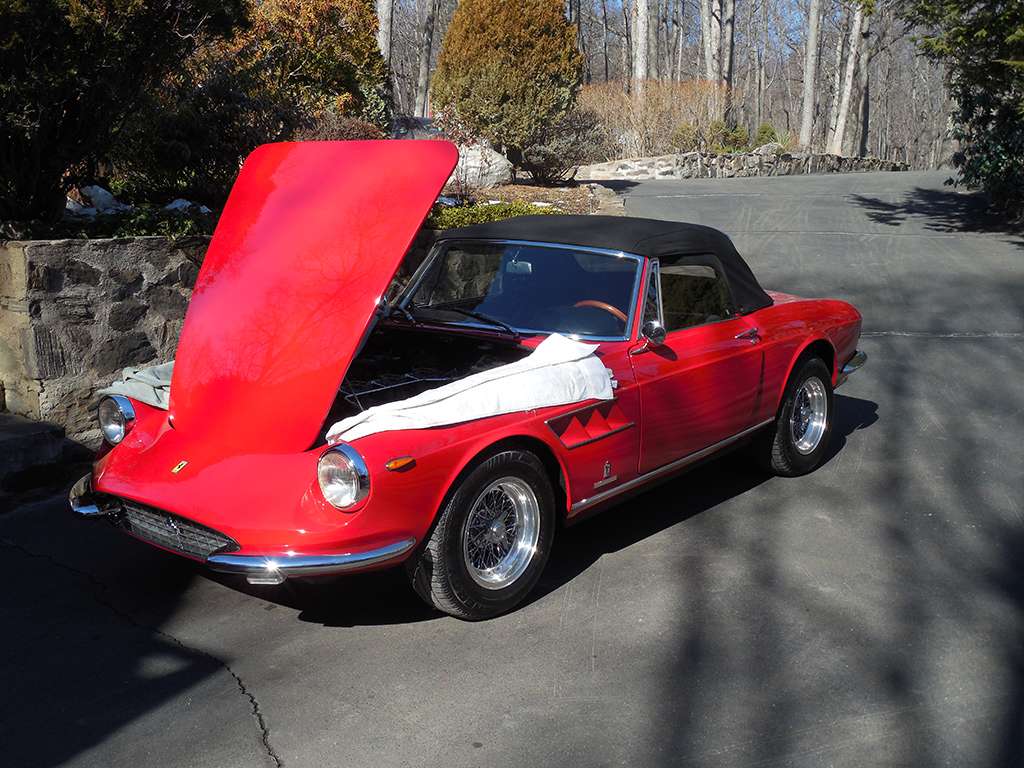 I’ve been messing around with the fuel system on a customer’s 330GTS without much success. If the car sits for longer than a couple of days, the accelerator pumps in the carburetors would clog, requiring me to partially disassemble the  carbs to clean a white powder collecting on the internal surfaces. 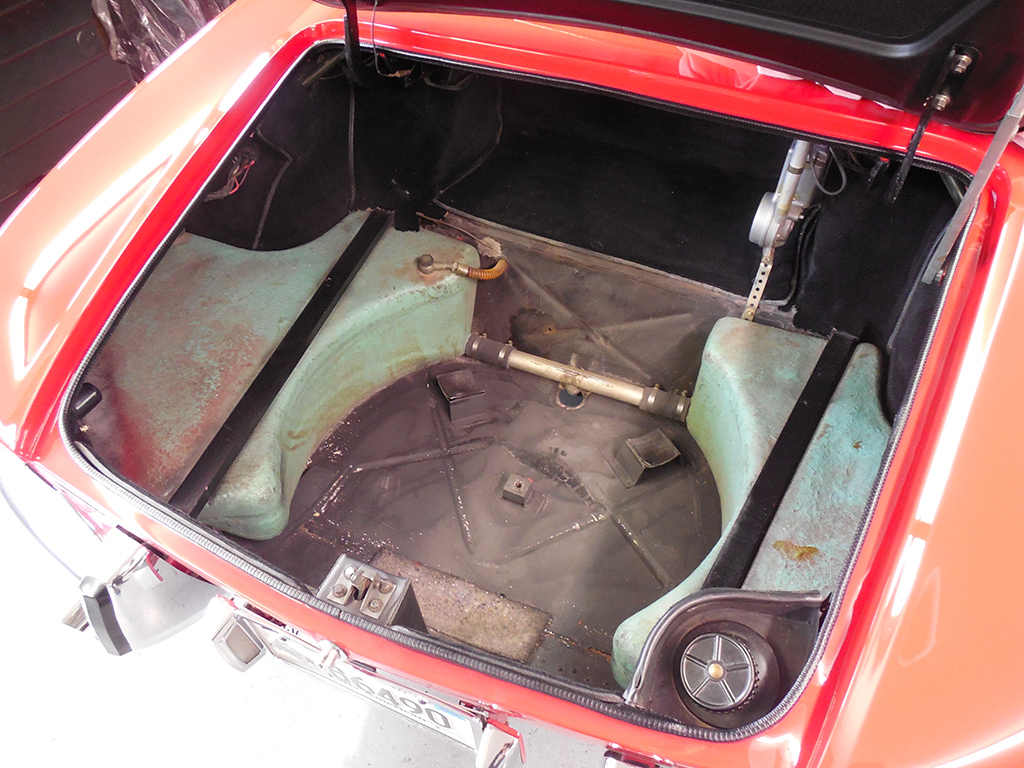 I knew the fuel in this car was old, and was hoping some fresh gas and some much needed driving would solve the problem, but the clogging persisited. I finally admitted defeat and decided to pull the tanks to have them cleaned, but first I had to get the fuel out. 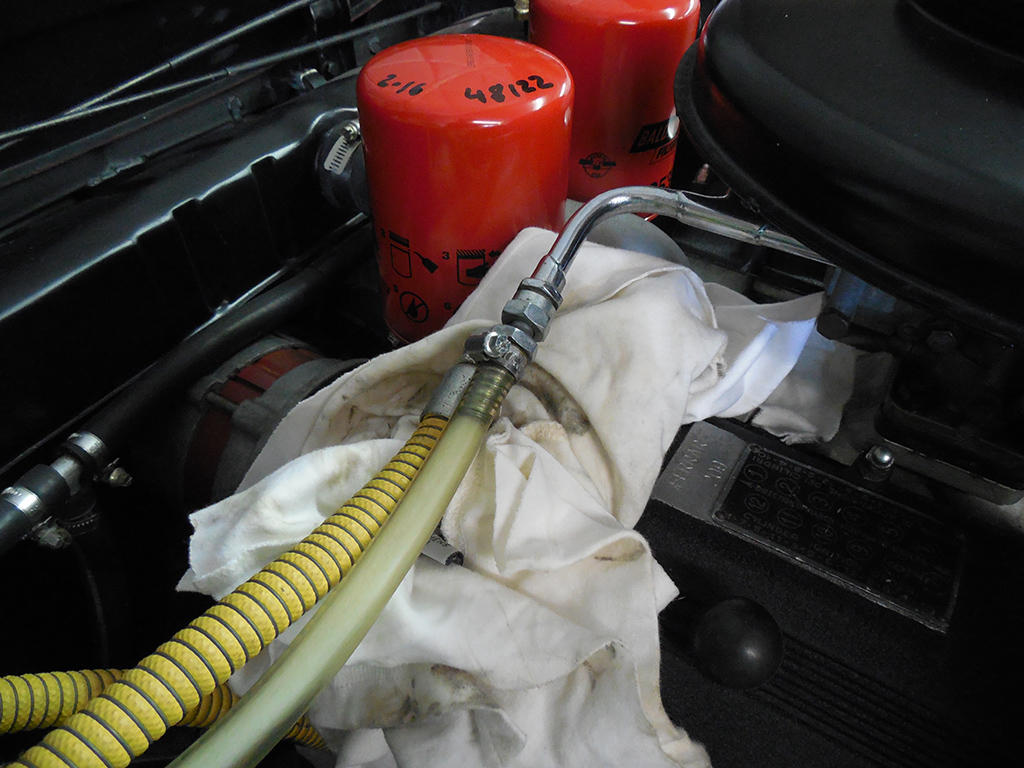 I think my resistance to pulling the tanks is from whenever I work on the fuel tanks, I would go home that day smelling like gasoline. Draining the tanks from the drain plug is never an splash-free endeavor, so I pumped as much as I could with the fuel pump. I got a spare fuel line fitting and attached it to the fuel rail and slowly pumped most of the fuel out of the tank. 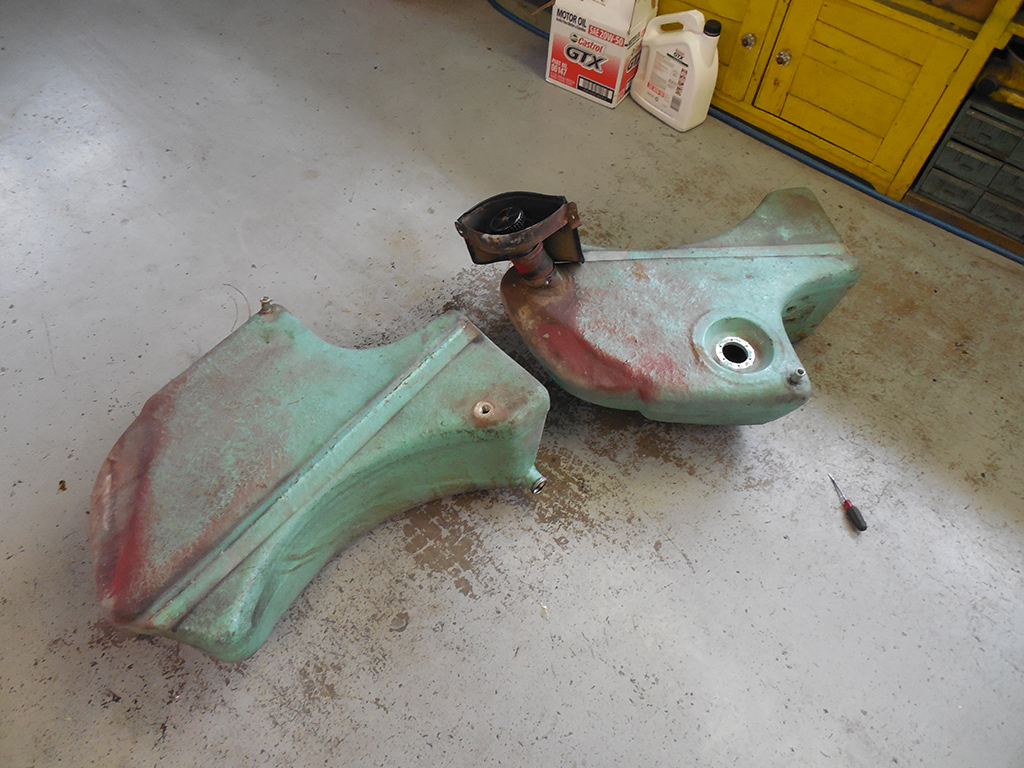 With the twin tanks nearly empty, draining the tanks was a little less messy, and soon I had the tanks out and ready to be cleaned. 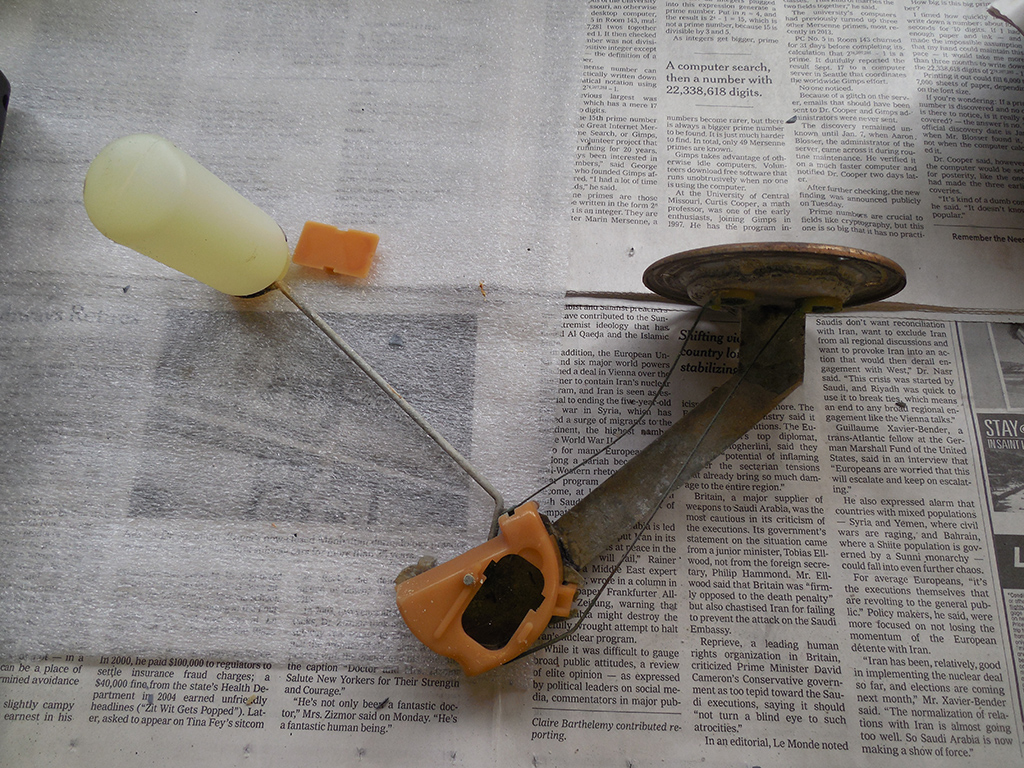 The fuel sender wasn’t working right either, so now was the time to get it fixed. It looked like it was simply corroded and not passing any current through the contacts. This sender is designed to sit submerged in fuel as it measures the level, but perhaps from having a half filled tank the condensation rusted out the sender. 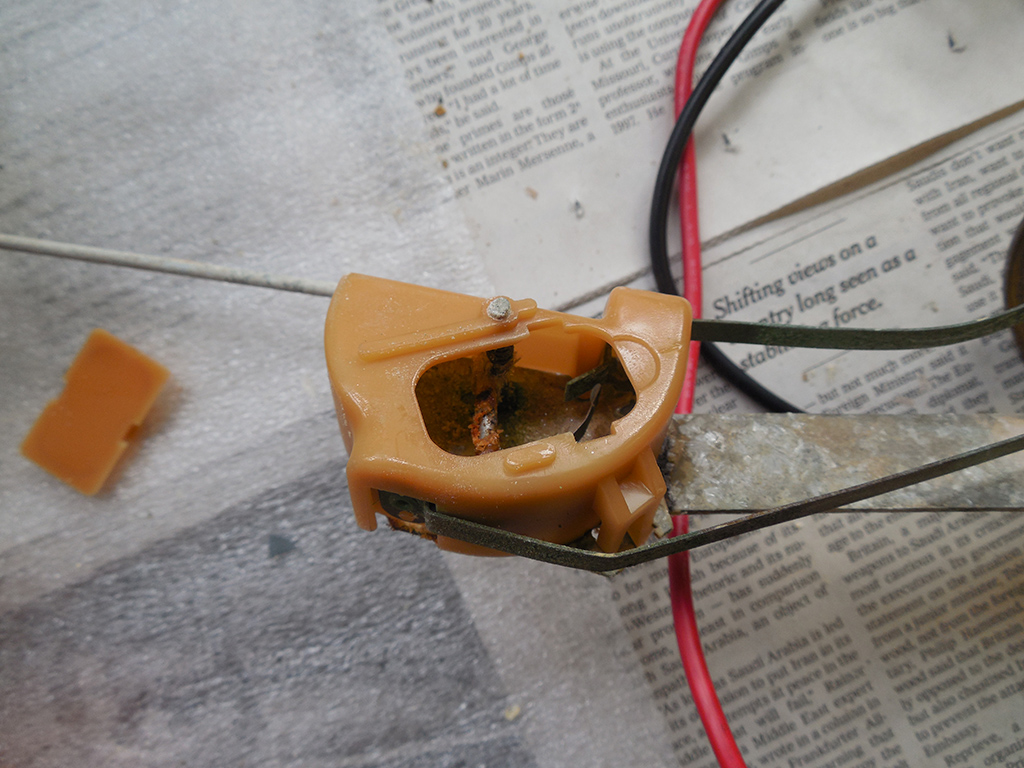 Rust and corrosion was forming on all the internal surfaces and will have to be cleaned and refurbished. 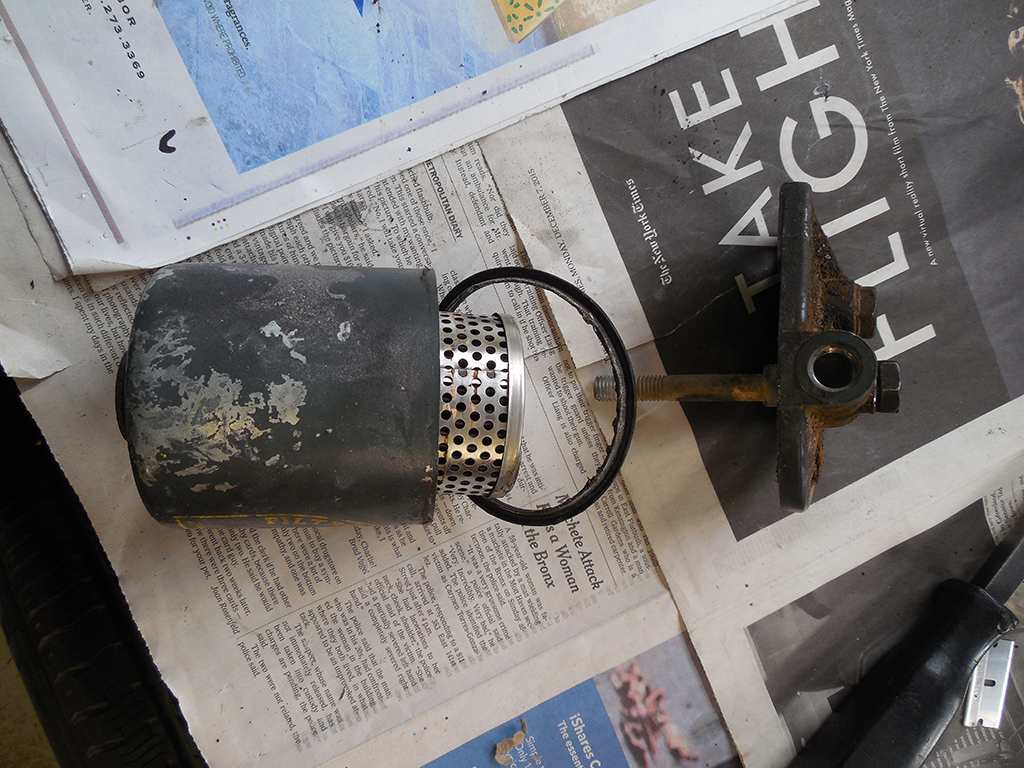 With the fuel system drained, now was the time to pull the fuel filters and clean things up. 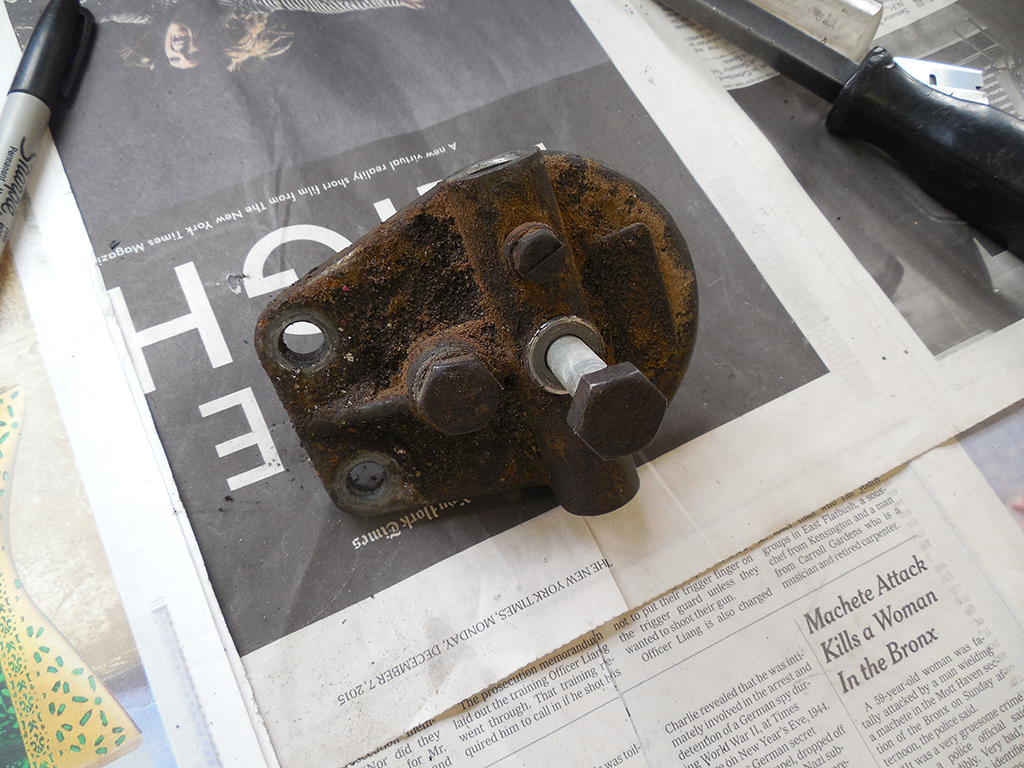 The funny thing about the rear fuel filter on most Vintage Ferraris is there is not enough room to remove the center bolt that secures the fuel canister when it’s mounted in the car. Most times you can unscrew the canister, change the filter, change the gasket, and put the canister back, tightening it with the bolt. There is an aluminum washer that seals the bolt at the top of the canister that is impossible to change without removing the housing assembly because there is not enough room to pull it straight out, and after a few filter changes this washer can leak, and the whole assembly has to come apart to change this little washer. From the looks of the dirty housing, it looks like this housing hasn’t come out in years. With the fuel system drained, now was the time to change the washer! 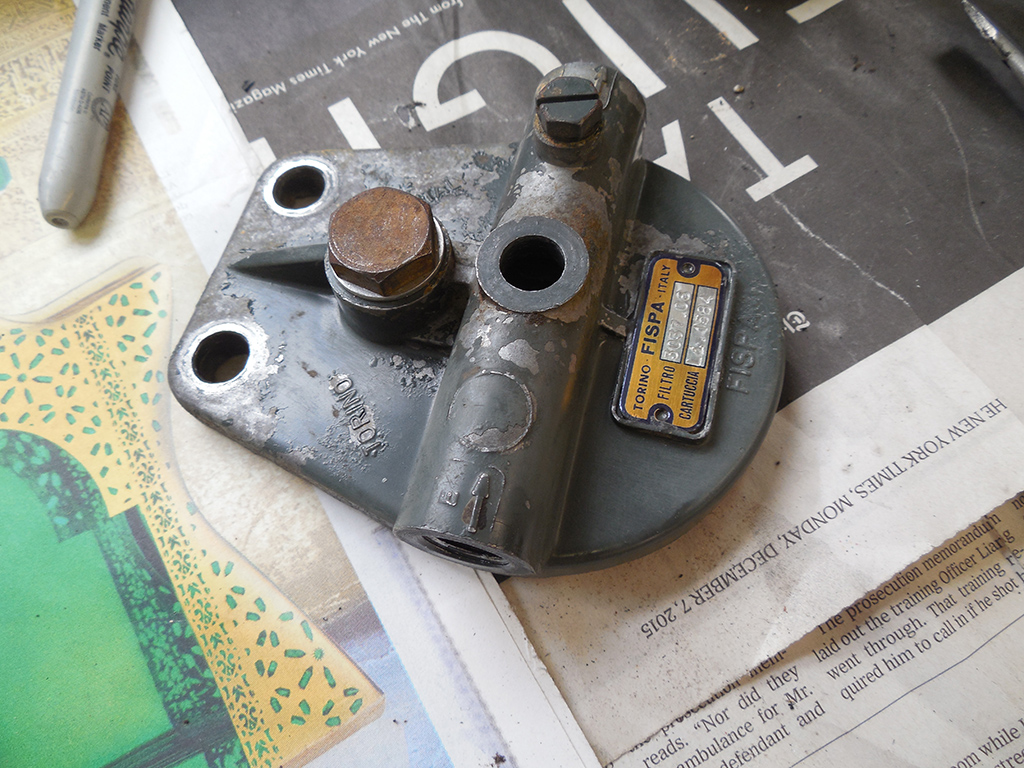 With a little de-greaser and some scrubbing, the housing looked much better. 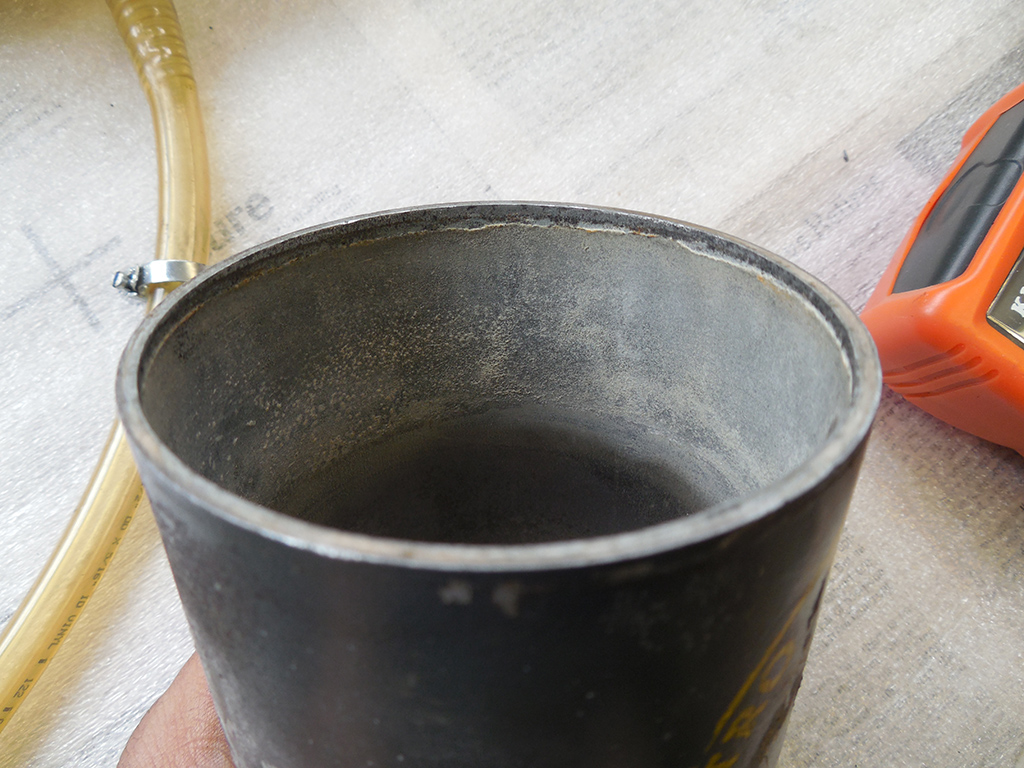 Looking inside the filter housing, I could see a layer of white powder forming on the inside of the filter housing. This is the stuff coating all the fuel surfaces and wreaking havoc with the fuel system. When soaked in fuel, you can’t see this layer of powder, but it seems to collect inside the carburetors when the fuel is allowed to sit for any amount of time. Cleaning out this powder will help our problems with the carbs. 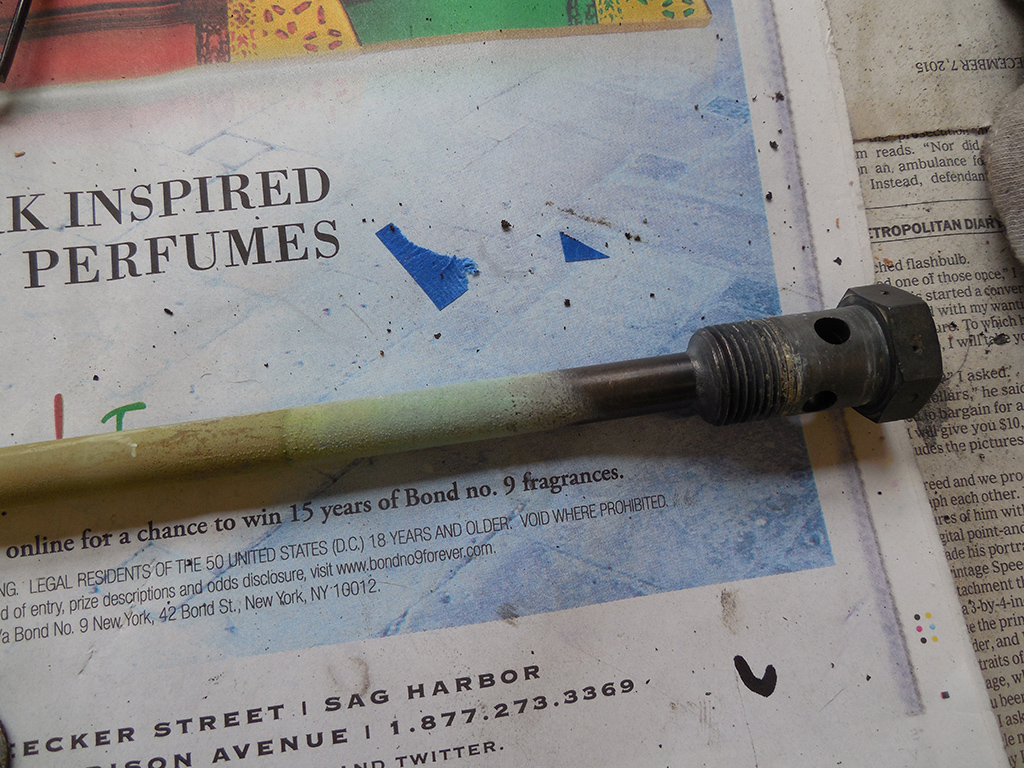 The fuel pickup tube was also covered in this white powder. You can see the difference after I cleaned the top of the tube. 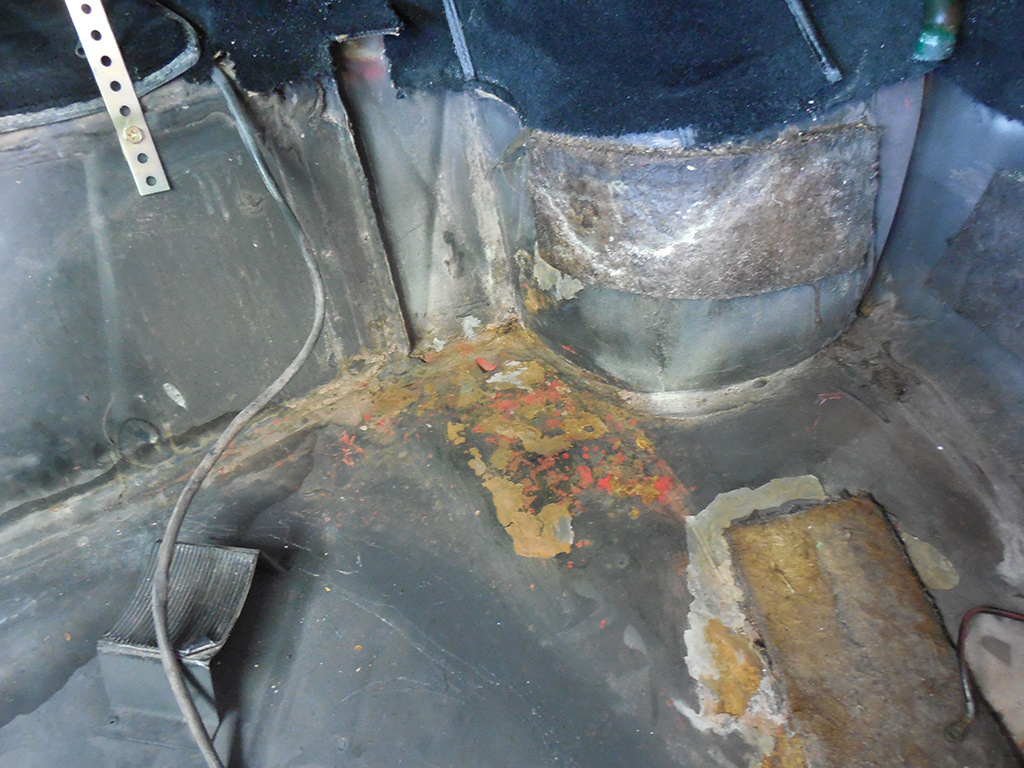 With the gas tanks out of the trunk area, I found a couple of areas of bare steel that could use a clean up and painting. 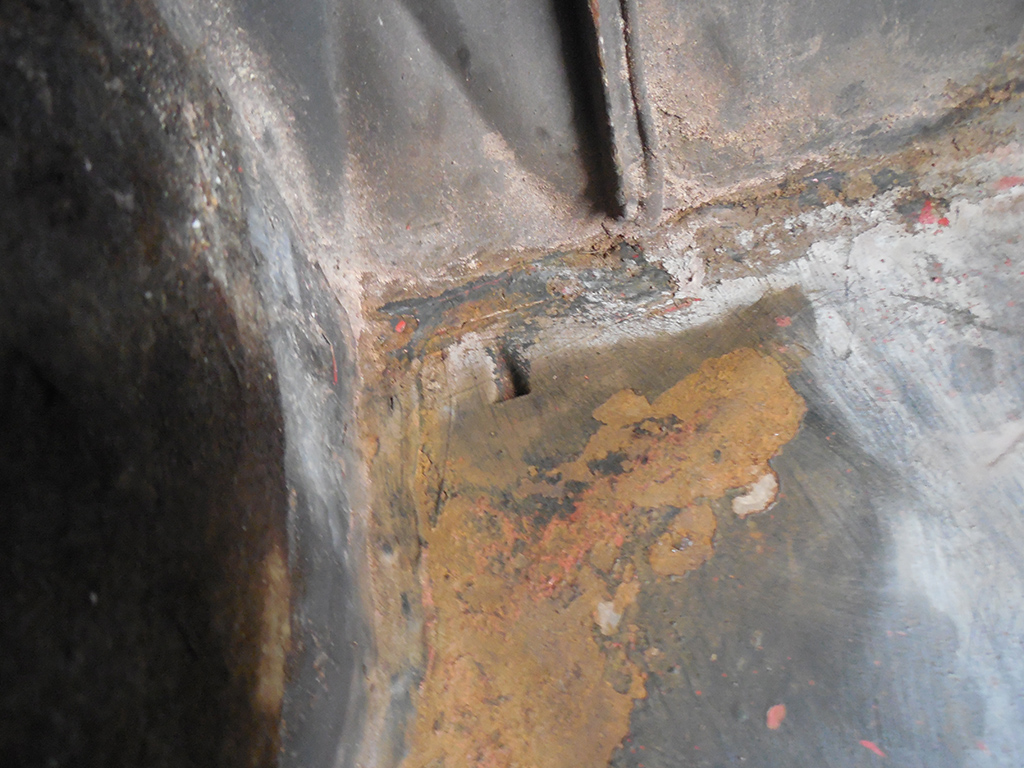 The trunk floor was pretty solid, and I wanted to keep it that way by making sure the little drain holes were cleaned out so if any moisture collected at the bottom of the trunk, the water would have a place to drain out of the car. 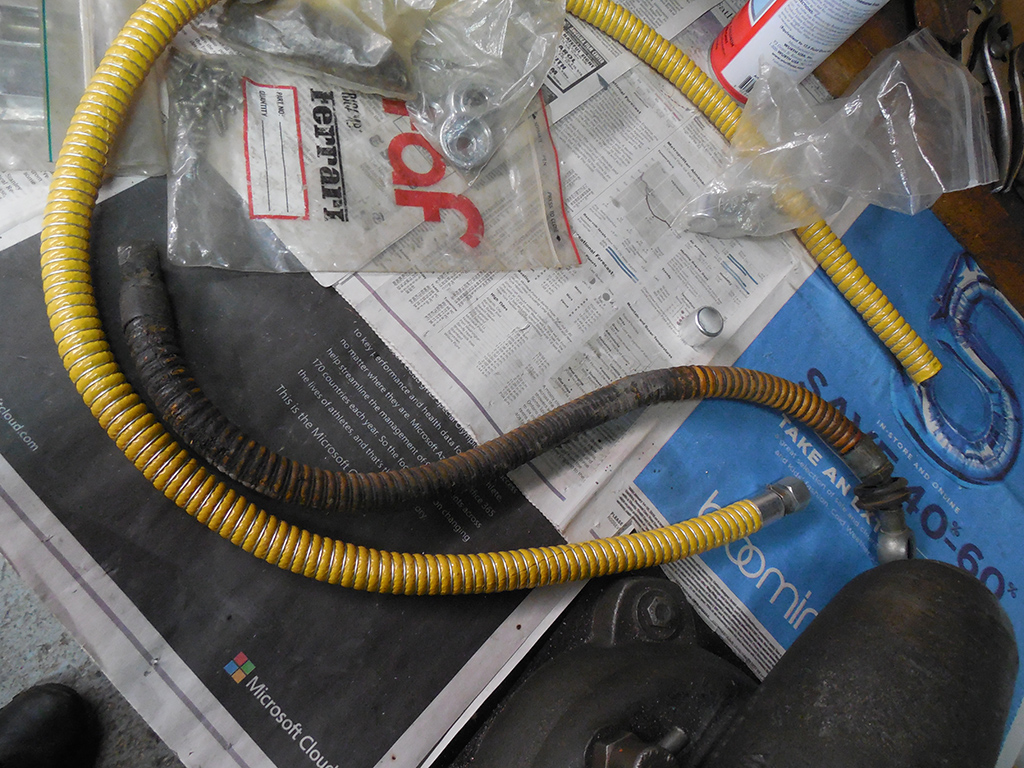 I replaced the old fuel line from the tank with new one. Again, with everything apart, now was the time to do this. 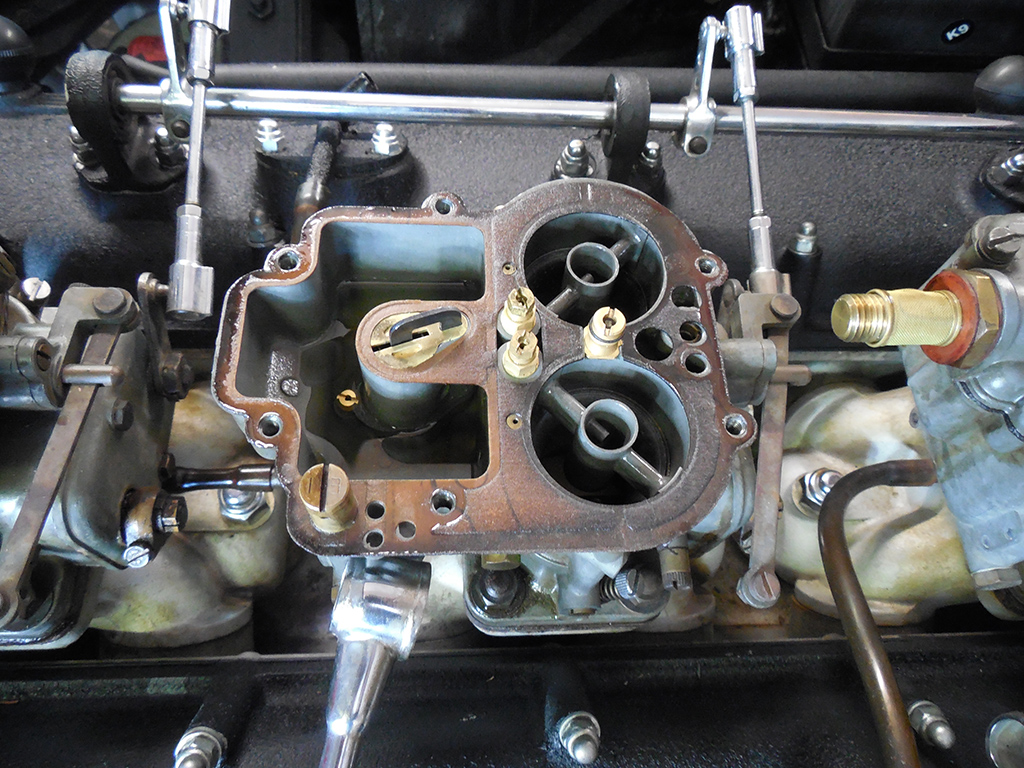 With the whole system cleaned, I circled back and cleaned any remnants of the old spoiled fuel out of the carbs. 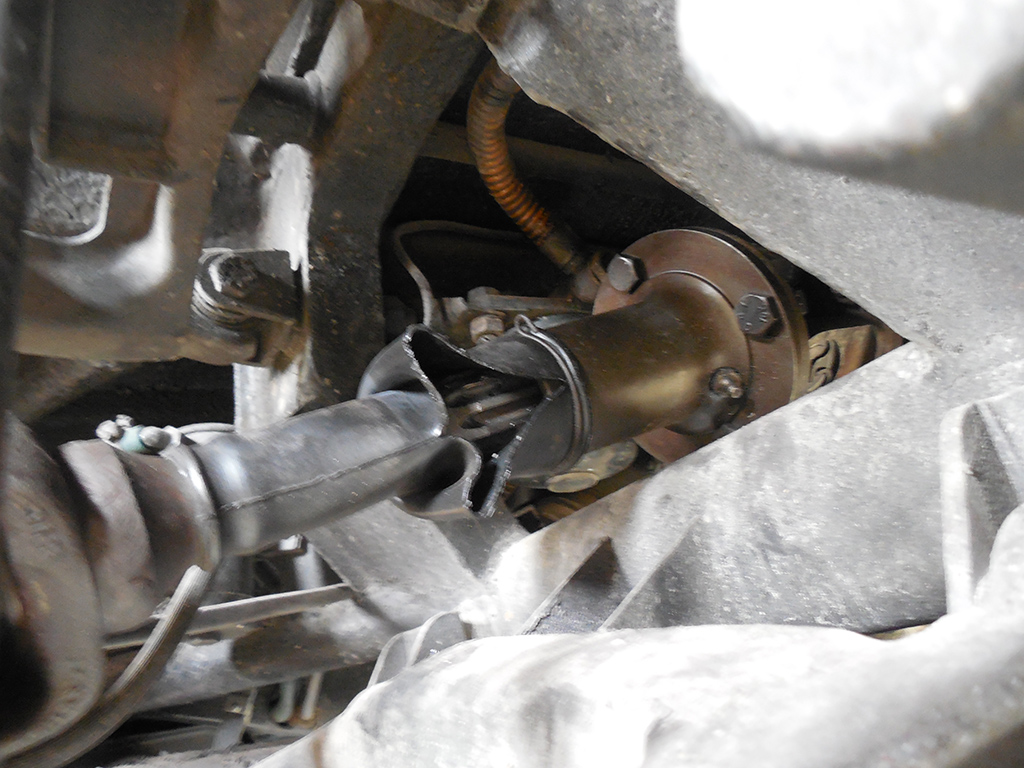 While I was under the car, I noticed a split in one of the rubber gaiters covering the rear half shaft. I could have sworn we did a pair of these a few years ago on this same car, and there really wasn’t a lot of mileage since then. Sometimes reproduction rubber parts for these cars leave a lot to be desired. The problem is these cars have such a low production, it’s really not worth re-engineering a better gaiter because you’ll never make back the money, time, and energy to make a better product by selling the one set a year. My suppliers can do it, but the dozen or so they sell won’t make a profit either. Instead we continue to put inferior products on million dollar cars! 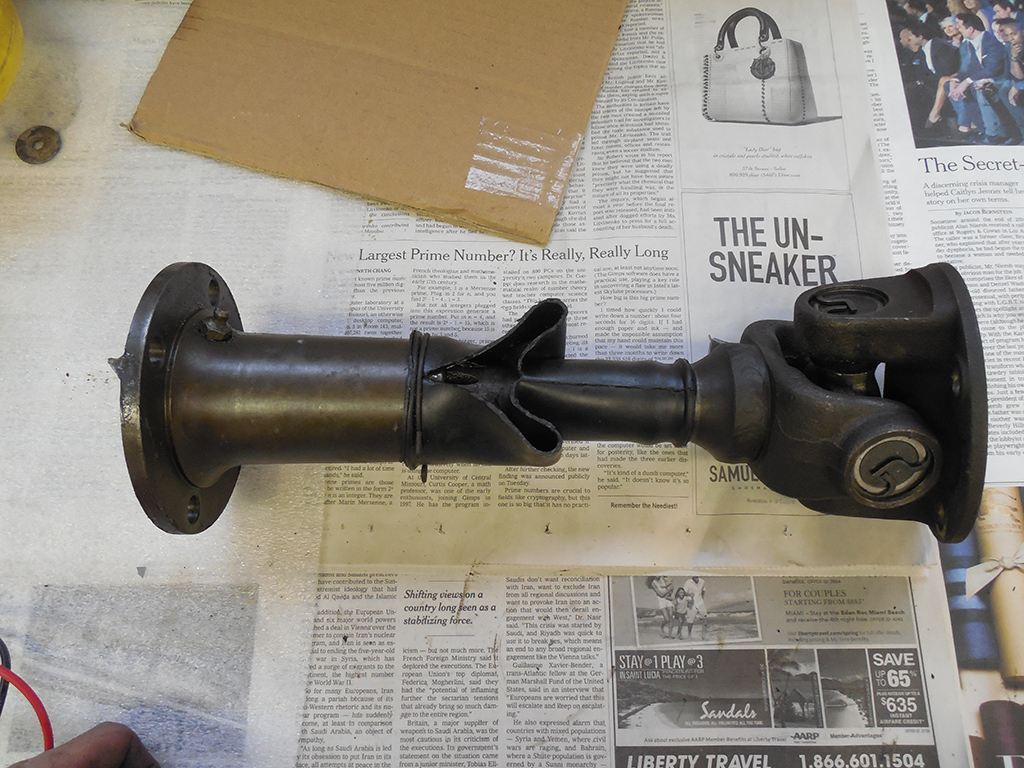 This half shaft will have to be disassembled, with all the ball bearings counted and cleaned to replace the failed rubber boot.