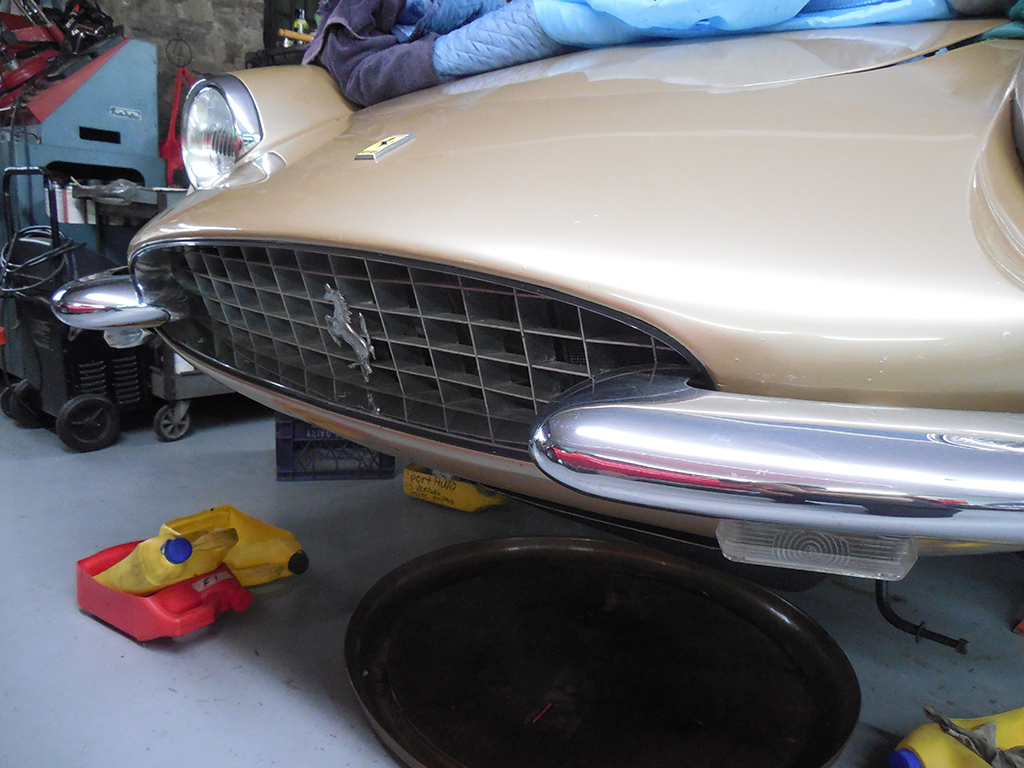 I have a very rare un-restored 330GTC that I’m preparing to bring to Concorso Italiano in August. This car has only 20K miles, and is supposed to have never been taken apart and restored. Rarely do we have an opportunity to see unrestored cars, and if we do, it’s at a show where in-depth study can’t be done. When I initially inspected the car, I found quite a lot of evidence to this car’s originality, but there were still some doubts. In my discussions with the owner, the broker, and the buyer, we felt this car was worth purchasing, but I still had some questions I needed to answer. 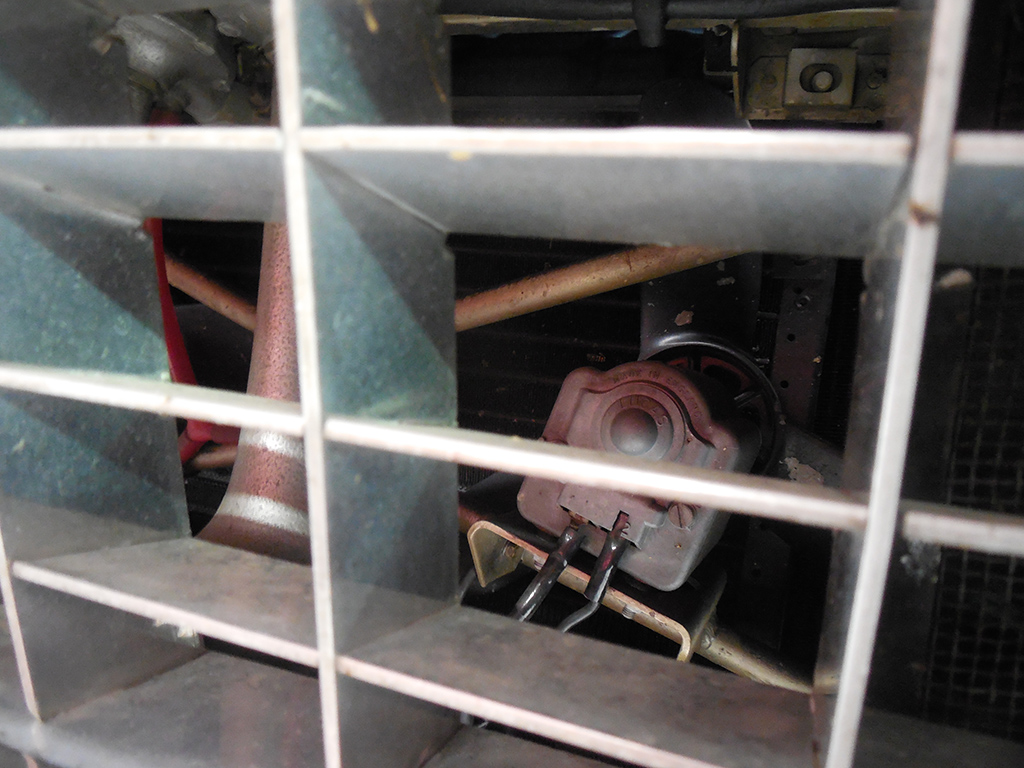 When restoring these cars, I have always painted the area behind the grille a flat black, or semigloss black paint. It’s generally accepted in the restoration community to be “Concours Correct,” but I was puzzled to see body color on the radiator support frame on this “unrestored GTC.” I know there was some paint repair on the lower chin of the car, but I didn’t really know the extent of the repair to the nose of this car. Could the damage have extended into the nose of this car, hence the overspray on the cross member? The only way to know was to look behind the grille. 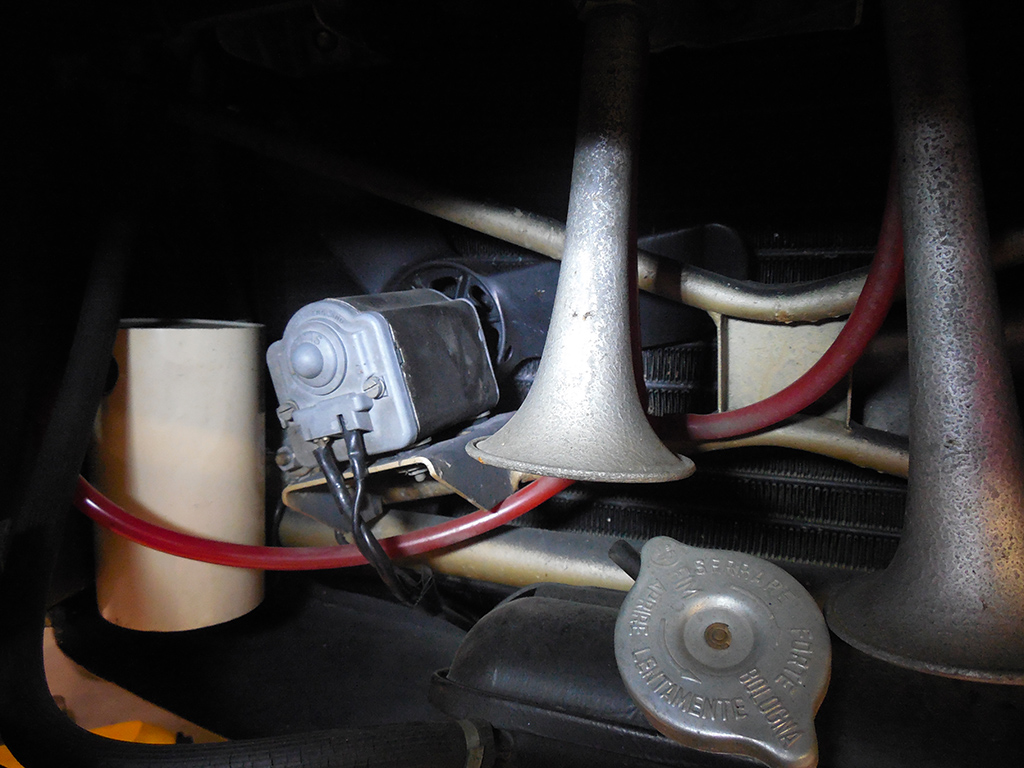 There are several details in this picture that came into question, and I had to forensically see what was original and what may have been painted after the car left the factory. The horn compressor cover was thought to be painted black, but this one is natural white plastic. The cross member is showing body color, but I also saw a lot of black paint as well. The red horn hose was correct. The overflow tank and cap were correct, but it was missing the overflow tube. The horns were correct, despite a bad photograph; hammertone silver.

My dilemma was to make sure what was original, and correct what was not, but not destroy what was actually original to make it into what was thought to be correct! 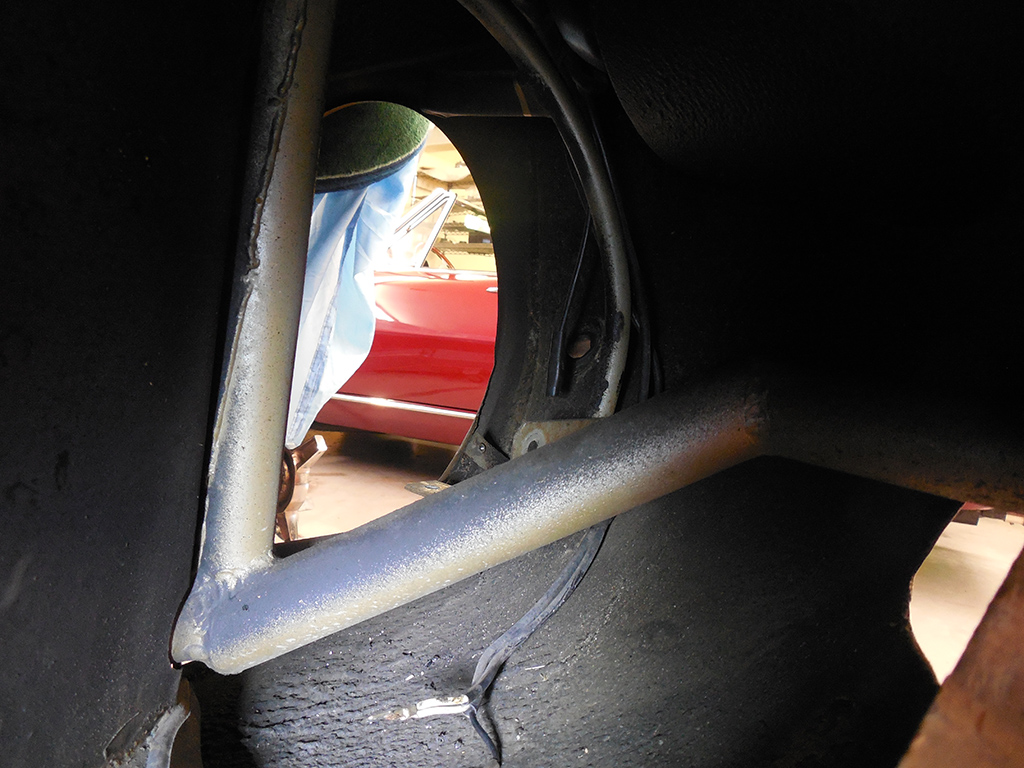 This shot is looking through the grille towards the front left tire. The splash shield was removed. There is an even coat of undecoating coming from the direction of the wheel well.

My biggest concern was the overspray. Looking closely, I noticed all the black paint was coming from the rear of the car. The spray pattern of flat black paint and undercoating was as if someone was spraying from the wheel wells and the engine compartment, applying the black paint. 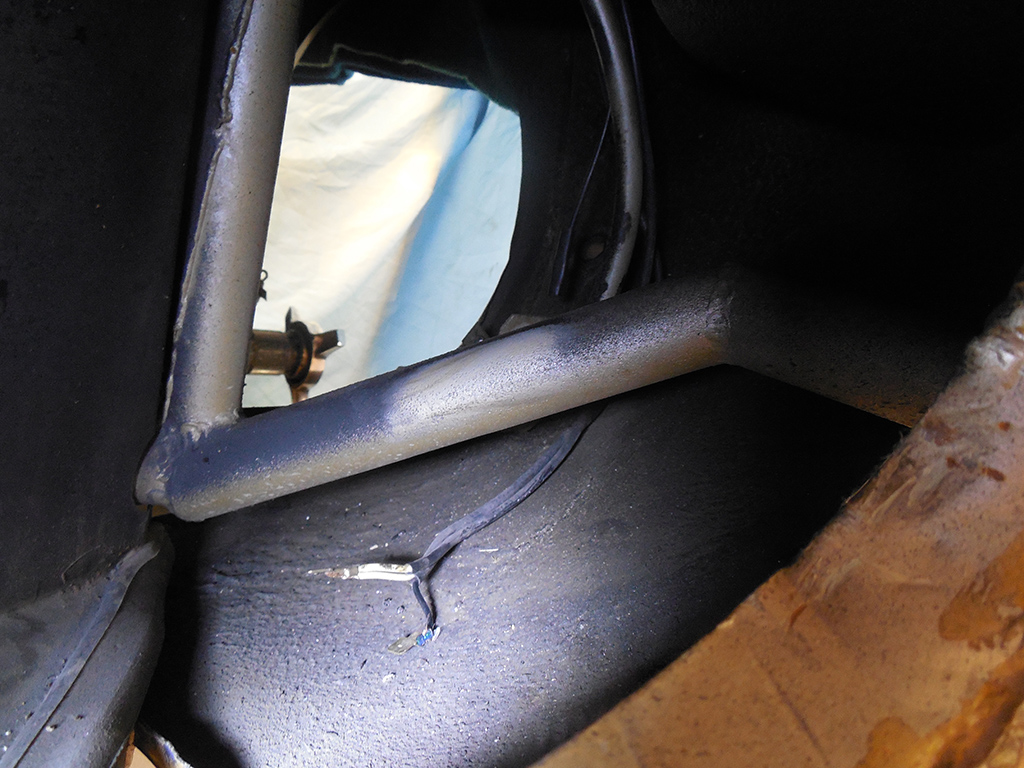 I’ve been sending these pictures to a panel of experts and FCA Judges for their opinions, and David Carte suggested I remove a little bit on paint to discern what was on top, the black color, or the gold color. Lo and behold, the gold color was underneath! This would lead me to suspect, the car was painted in body color first, then a painter came in and sprayed the engine compartment with flat/semi-flat black paint. The radiator and engine was not installed at this time, so they had access to all the hood areas. Some painters did a more thorough job than others, and this car didn’t get all the spots covered. 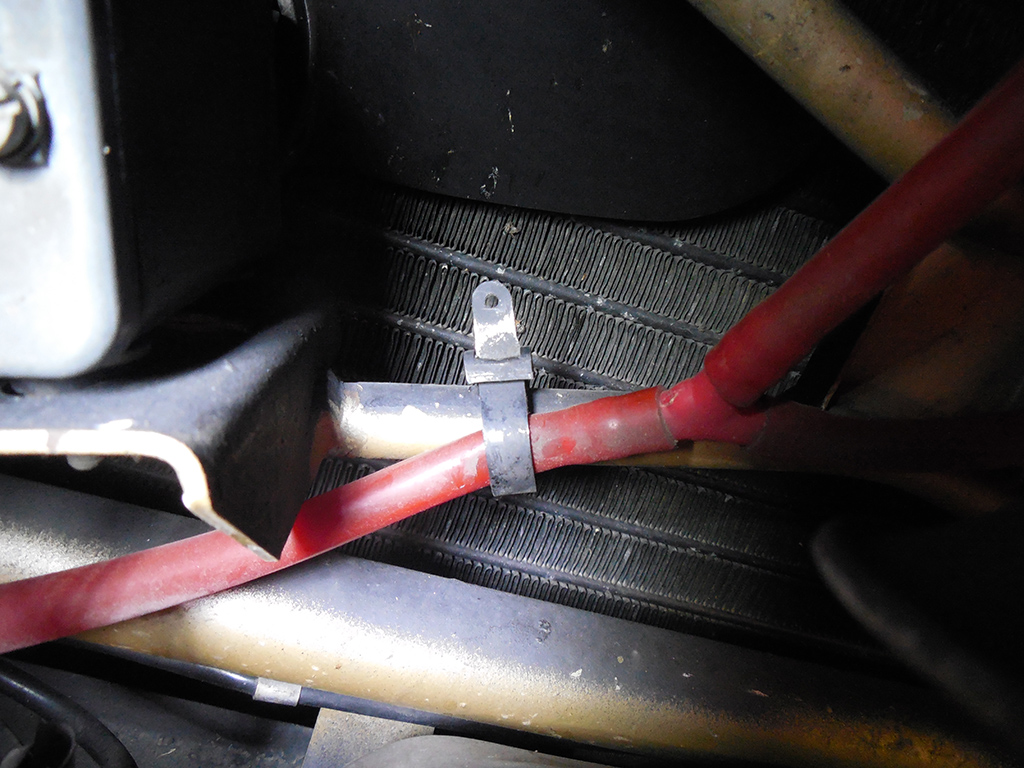 With the grille removed, I was able to see more evidence to this car’s originality, like this plastic horn hose clip. These are impossible to remove without destroying, and is probably original from the factory. Notice the overspray on the cross tube under this original clamp. 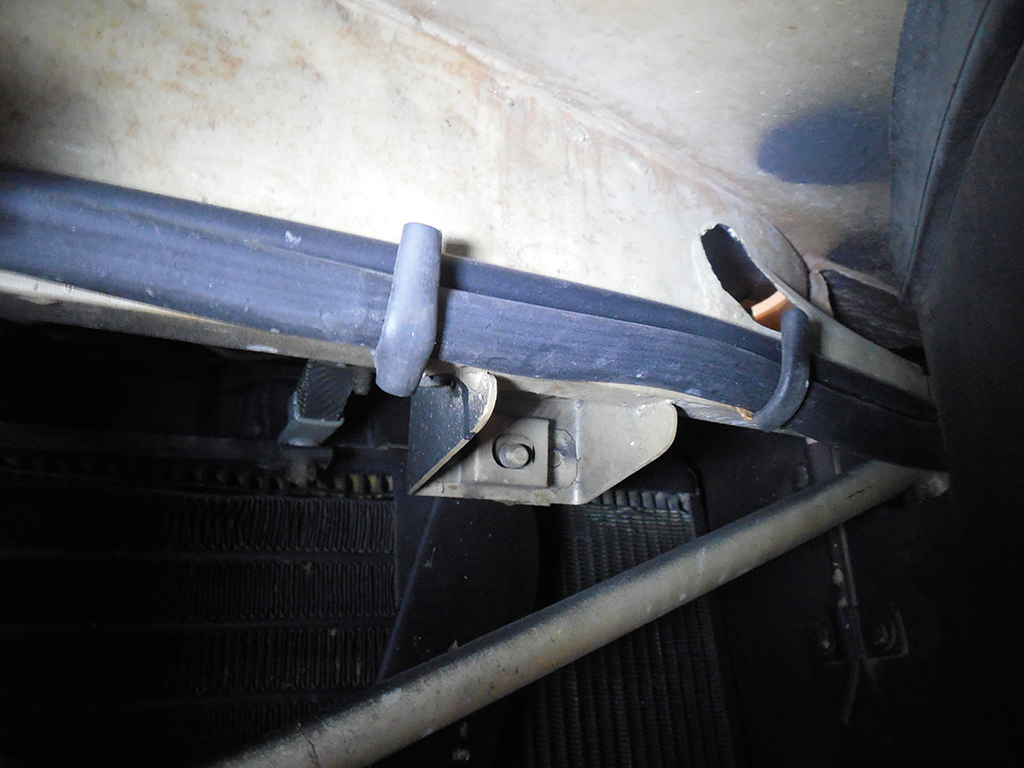 Another neat original detail was the rubber clip insulators protecting the wiring from chaffing running on the underside of the hood opening in front of the radiator. It’s amazing after 50 years, these are still there and in great shape, showing no signs of dry rot. Also look closely at the top right corner of this picture. There is a spot of black overspray that came through a hole in the engine compartment. The hole is just below. This had to have been done when they painted the engine compartment when this car was being built 50 years ago!

I know these details are ridiculously pedantic, but I’m sure there are a couple people out there that find this stuff fascinating!