A Visit to the Cornfields of America! 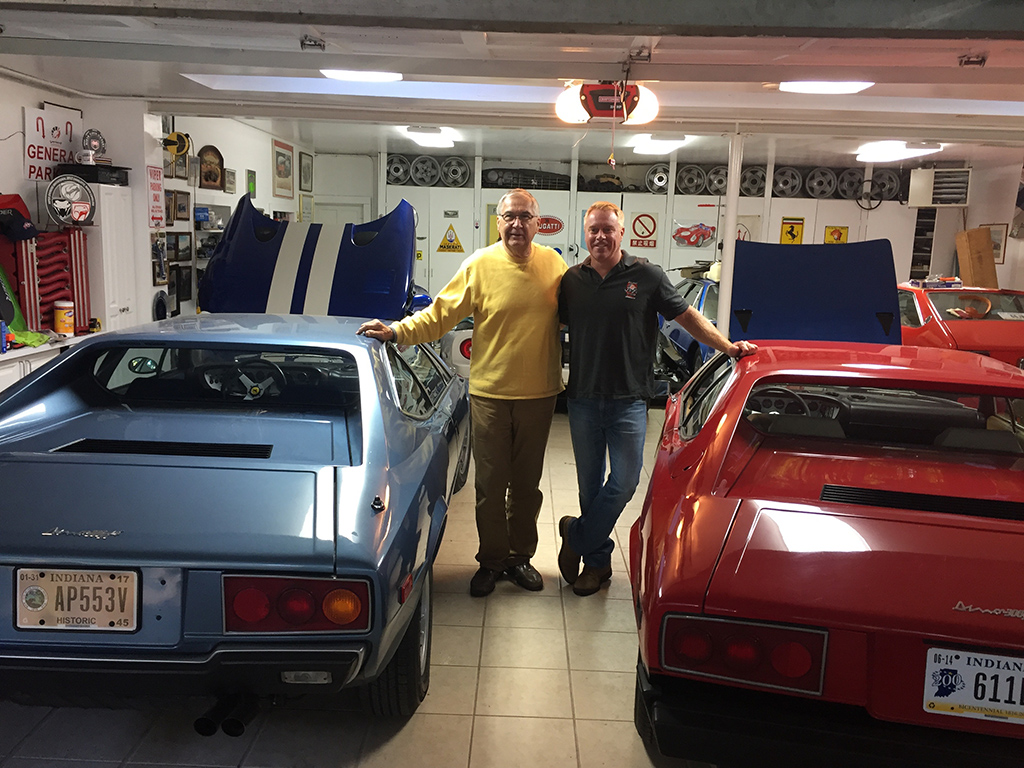 I took some time out of my work schedule to visit some friends in the Chicago area. My first stop was Hillary Raab’s house in Crown Point Indiana where Todd Hudkins met us with his red 308GT/4. Hill has been a collector of all things Ferrari since the 60s and his enthusiasm is infectious. 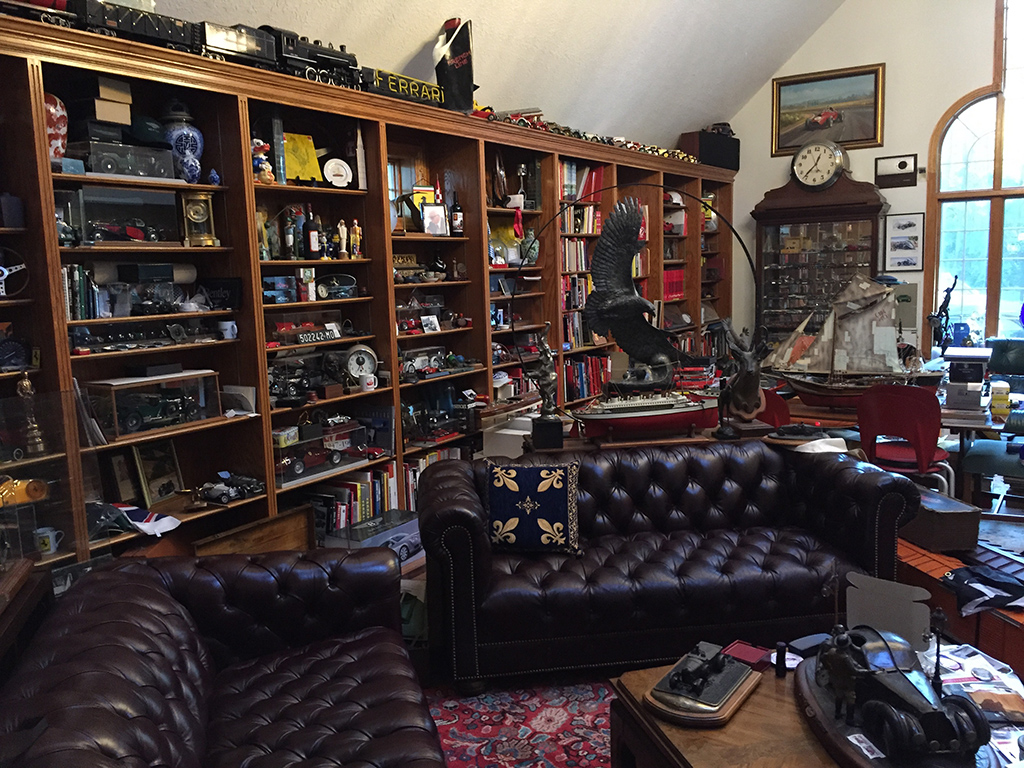 Hill’s house is filled with an unimaginable collection of Ferrari related items. Many of these things were collected through the many years of visits to Europe from the various factories and swap meets. The collection is so overwhelming, it takes hours of study to take it all in. Every time I visit, I see something I didn’t see the last time! 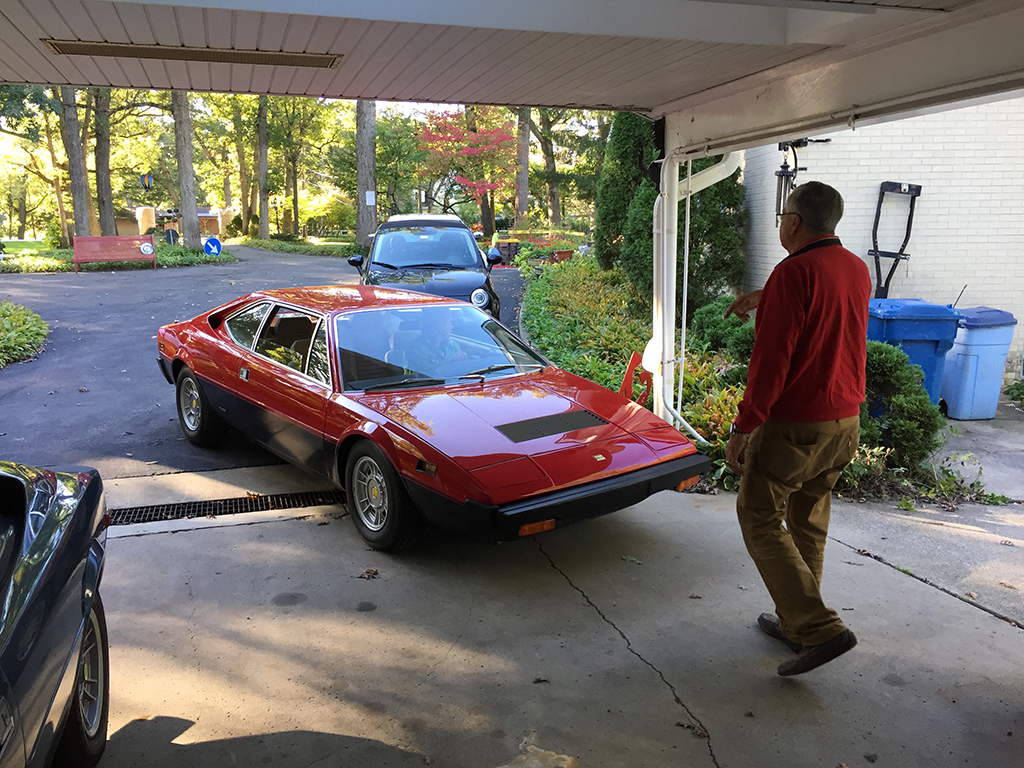 After a night spent at Hill’s house exploring his collection and talking about Ferraris, we fired up the cars early the next morning for a trip to the country! 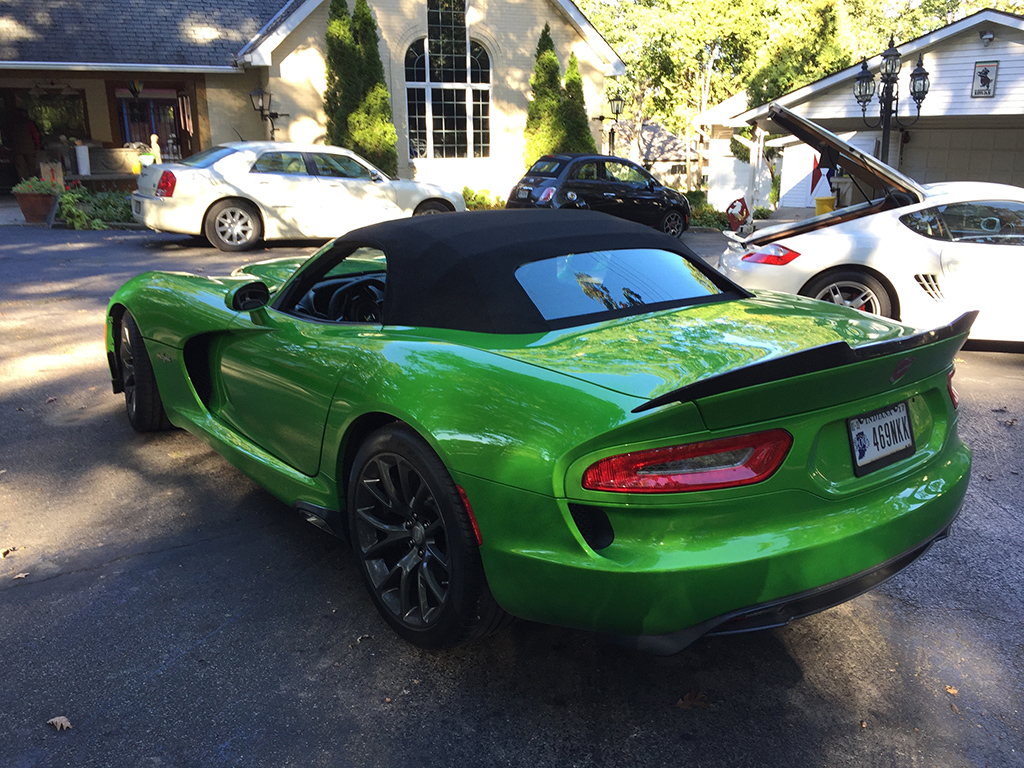 Todd drove his GT/4, Scott came out from Michigan in his Cayman S,  but Hill pulled out the Viper. This limited edition convertible is one of two Vipers Hill owns, and it was my first drive in one. Having been through the Ferrari scene of the 60s and 70s, Hill found the Viper Community very similar to what the Ferrari club was like back in the day. We talked a lot about how the values of Ferraris have changed the face of the Ferrari Club scene, but Hill has found some sanctuary in the modern Viper owners.

After I got used to the particular cadence of the V-10 engine, I too was impressed with the power, handling, and unadulterated driving experience we find today with traction control and driver’s aides. 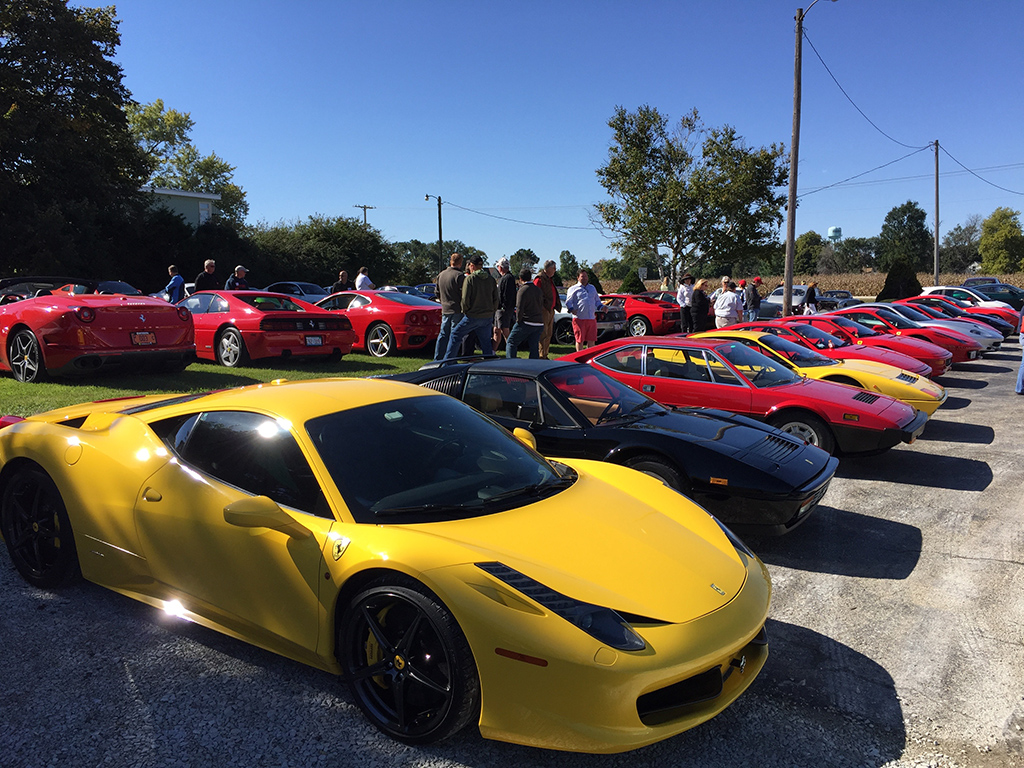 The Ford dealership in Roberts Illinois was the  location of a private party held by the Coady Family. The Patriarch of the family, Tom Coady, started collecting cars in this small town and his sons Todd and Shawn have continued the tradition. Between the three of them, they have amassed quite a collection, along with some great friends. I met Tom Coady 9 years ago at a FCA National meet in Wisconsin, and continued the friendship with Todd and Shawn, so when I heard they were throwing their BBQ this Fall, I decided to fly out.  It was amazing the variety of cars, especially Ferraris that showed up in this small town in Illinois! 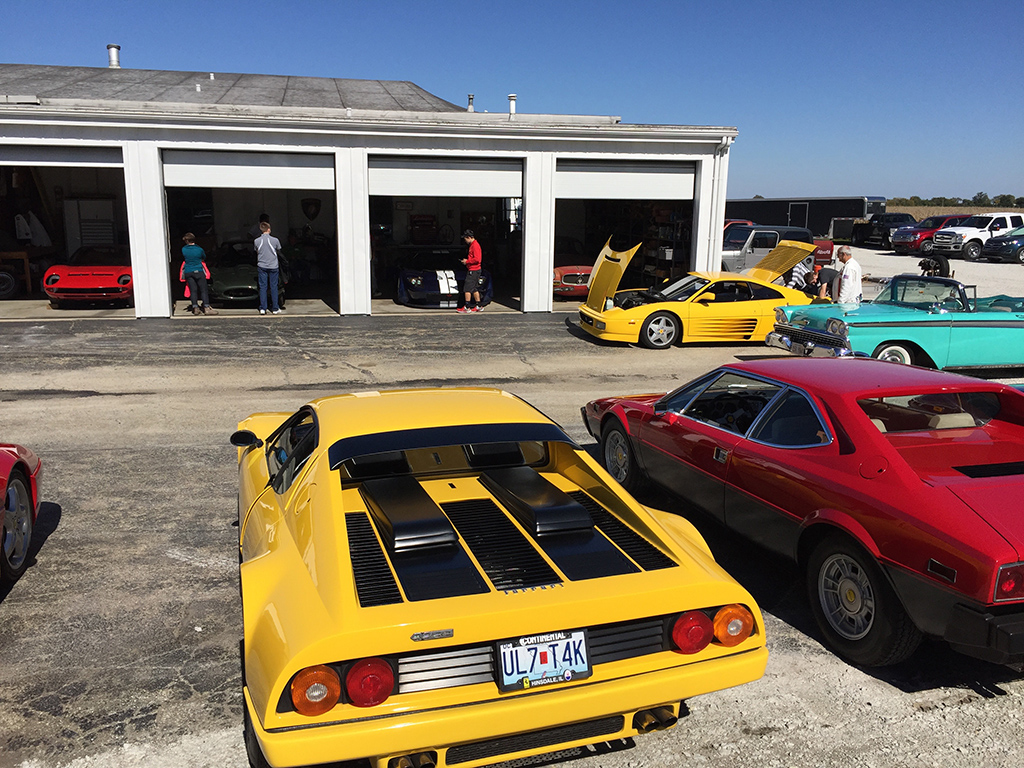 The three Coady’s gave tours of their shop and discussed the various projects, past and present. It’s hard to keep track who’s car is who’s, but it’s great to see something all members of the family can enjoy together. 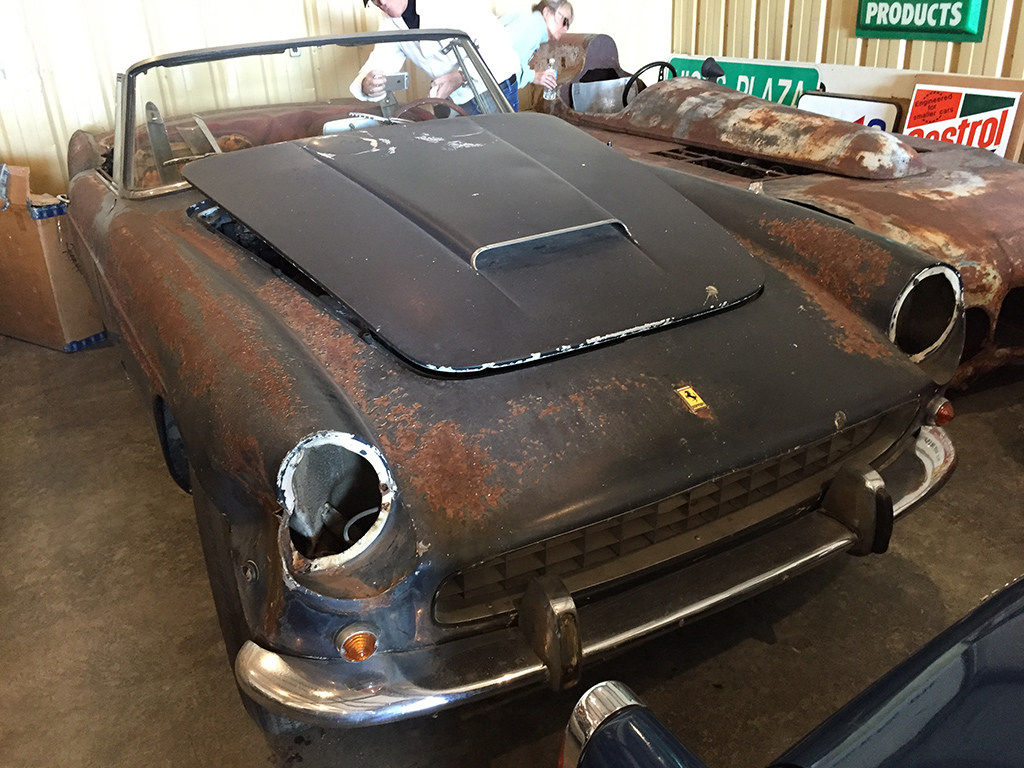 In a separate warehouse there were cars in wait for their turn at restoration. This particular car sat behind a service station for many year before the Coadys had the guts to buy it. It’s easy to see the value of this car today, but back when this car sat rusting in the midwestern weather, there wasn’t a line of buyers! 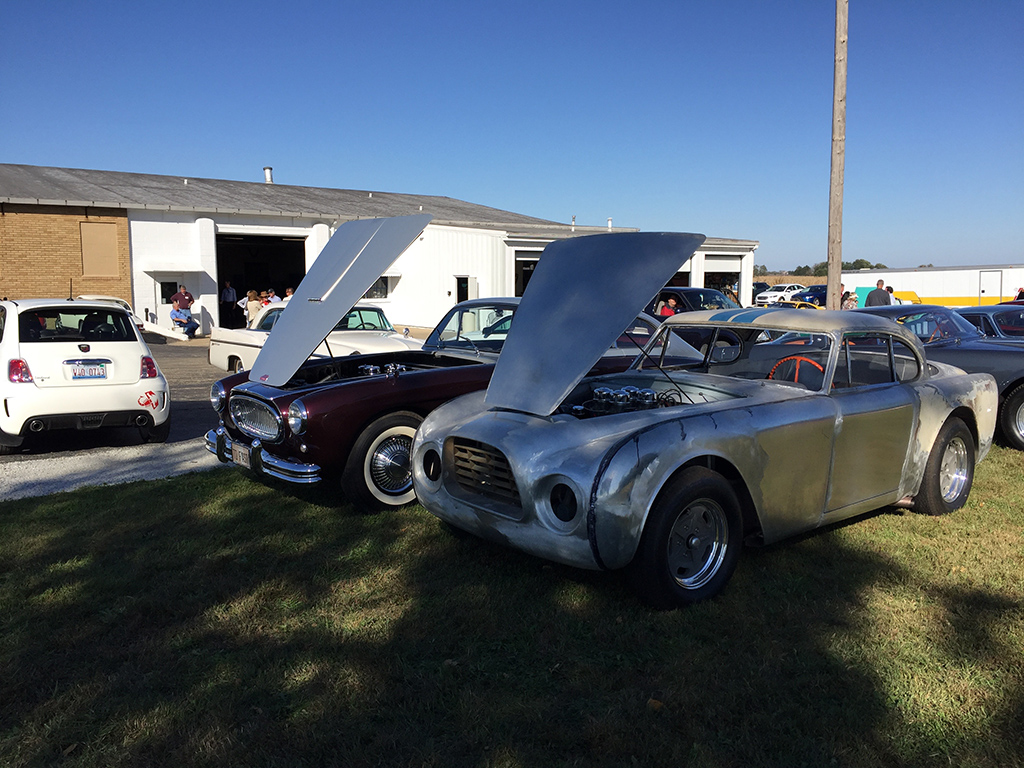 The senior Coady is still very active in collecting, and just trailered this Cunningham home himself last week! I suspect Dad gets priority when one of his cars comes up for restoration! 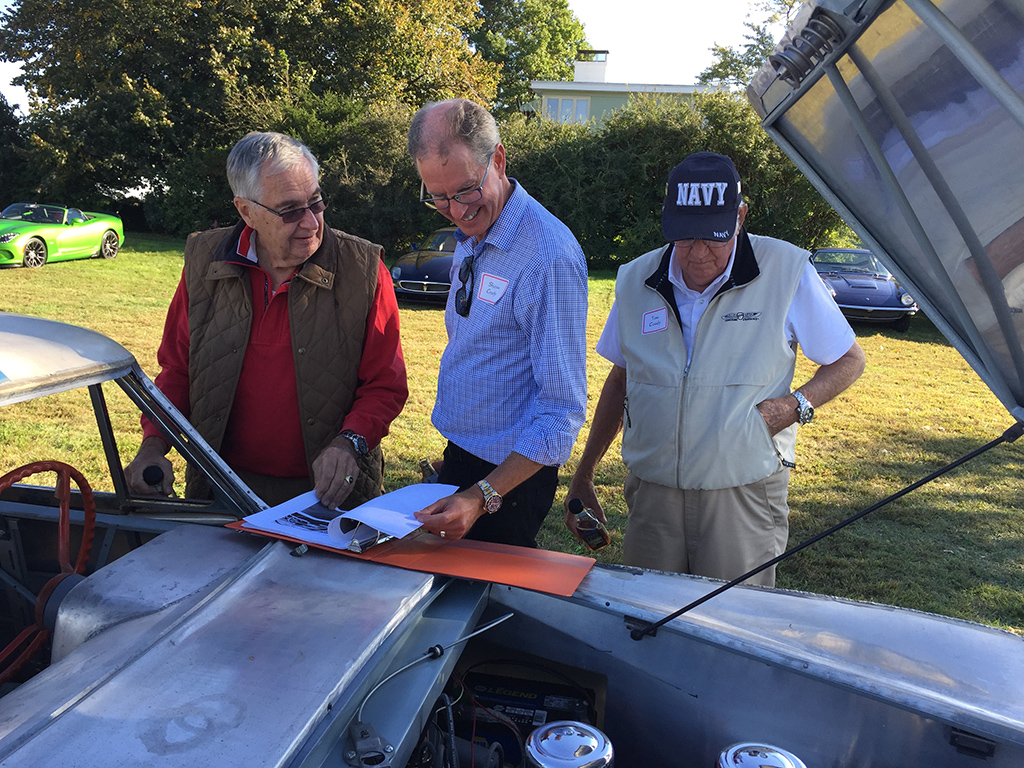 Hillary Raab (left) and Tom Coady (right), met many decades ago at a Ferrari Club meet and continue to be good friends. Tom’s son Shawn (center) grew up with gatherings like this, and continues the tradition today. I want to thank the Coady’s for inviting me to Roberts Illinois to their their BBQ. It’s nice to see true enthusiasm alive and well in the Heartland!