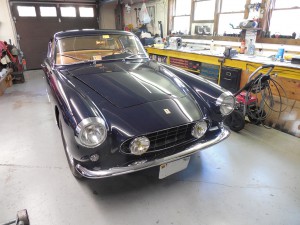 Last week an Ellena came to the shop to have us look at the rear differential. It was making a loud howling noise from the rear end, and we were concerned it would lead to something far worse. 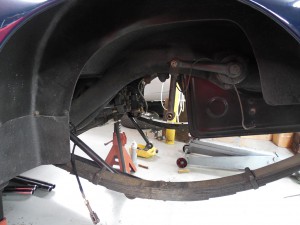 Pulling a differential on a Vintage Ferrari is fraught with many challenges, but the main issue is with the leaf springs. Unsprung, the Vintage Ferrari leaf spring wants to form the shape of a “U” so it is pre-tensioned even with all the weight off of them. Taking the differential out is not too bad, but getting everything back in, lined up, and operating correctly will be the challenge. We’ll be dealing with that challenge later. 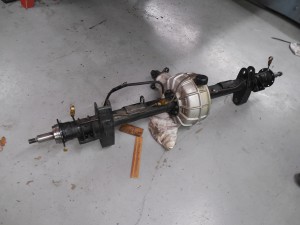 After removing the rear drum brakes, parking brake cable, upper and lower control arms, driveshaft, and brake lines, the shackle bolts were removed, and the rear diff was wrestled out of the car. 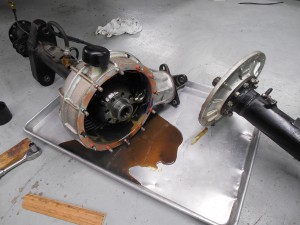 There were obvious signs this rear differential had been disassembled before from the signs of red RTV found on the mating surfaces. Ferrari didn’t use any sealant on many of the rear end pieces but the only way to keep these differentials from leaking after a service is to seal with with RTV.

We checked the outer axle bearings and they were fine, but the carrier bearings were definitely grumbling. 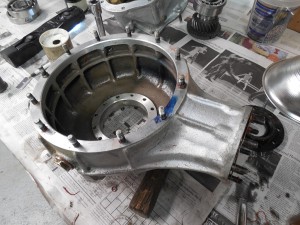 We cleaned out the center section and found a lot of metal at the bottom of the case. Although the owner had changed the gear oil a few weeks ago, there was still plenty of metal collecting inside the case. We thought the carrier bearings were pretty bad until we tried the pinion bearing. It was frightening how loose it was and how much noise it made. 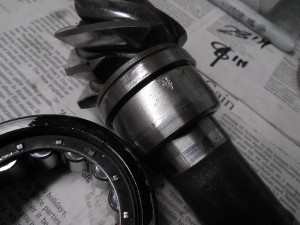 The pinion bearing has two bearings that support the pinion, and we could see physical damage on the inner race on the inner bearing. 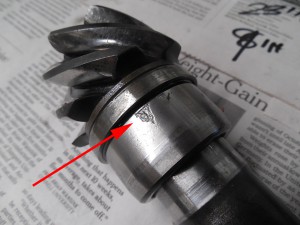 This kind of divot could really cause some damage if a roller caught on this imperfection. It’s hard to tell what caused this damage, or if it was a flaw from manufacture, but this bearing is obviously NG. 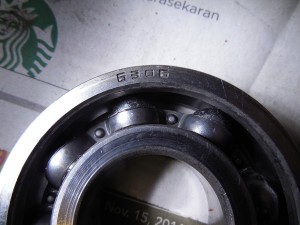 As we looked further at the last bearing, we found the ultimate issue. I tried to photograph the ball bearings that were housed in the the outer pinion bearing. There were all pitted and resembled round pebbles more than nice round ball bearings. What’s worse was there was so much wear that the race inside the bearing was also wearing out. Even Francois admitted this was the worse bearing he had ever seen inside a differential in all the years he’s worked on Ferraris! 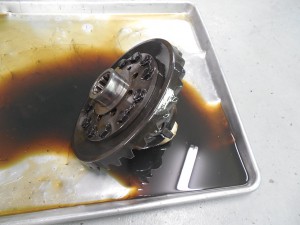 With all the damage and bearing wear on all the bearings we decided it was absolutely necessary to completely disassemble the differential to clean and check for wear. We think one bearing may have gone bad, and ejected metal into gear oil that circulated throughout the rear differential ruining all the other bearings. It’s also possible the other bearings were a little worn, and were made worse by all the metal. What ever the case, all new bearings were on order, and a thorough cleaning was done. 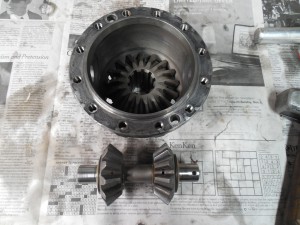 I disassembled the planetary gears inside the differential and dressed the bearing surfaces. Before the cleaning, these gears were not moving very freely and were binding against their bearing surfaces, but now everything was moving freely, and should work as it should.