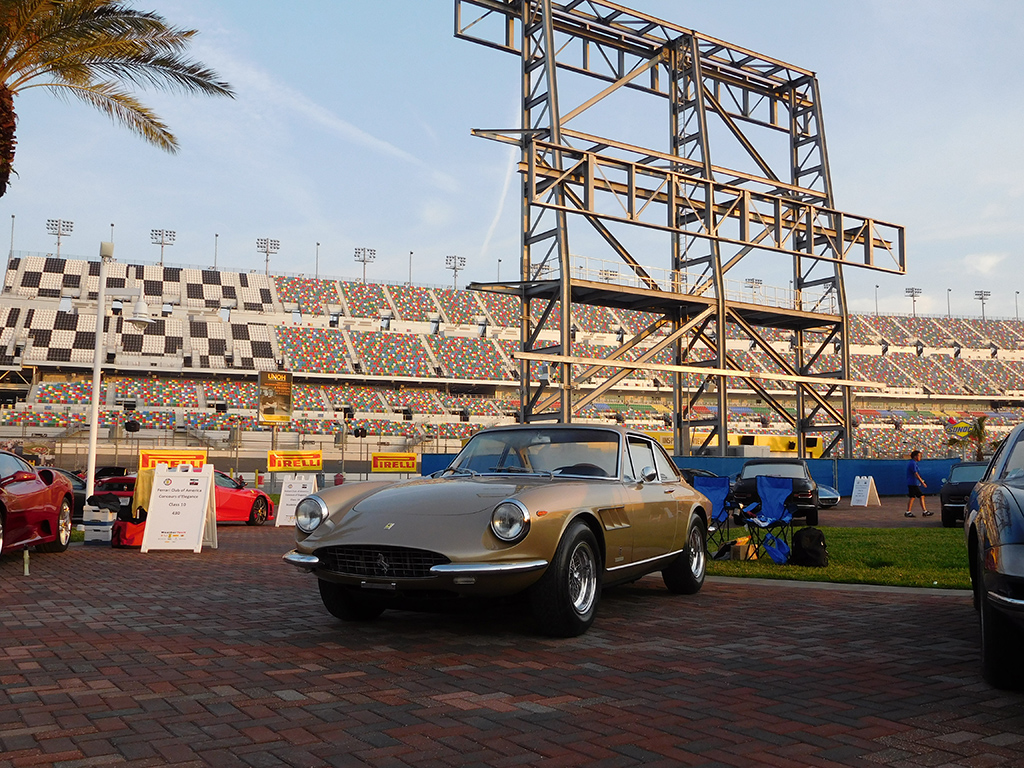 I finally made it down the long road to the 2017 Ferrari Club of America National Meet held at the Daytona Speedway with the Ferrari 330GTC that I’ve been working on for the last year or so. 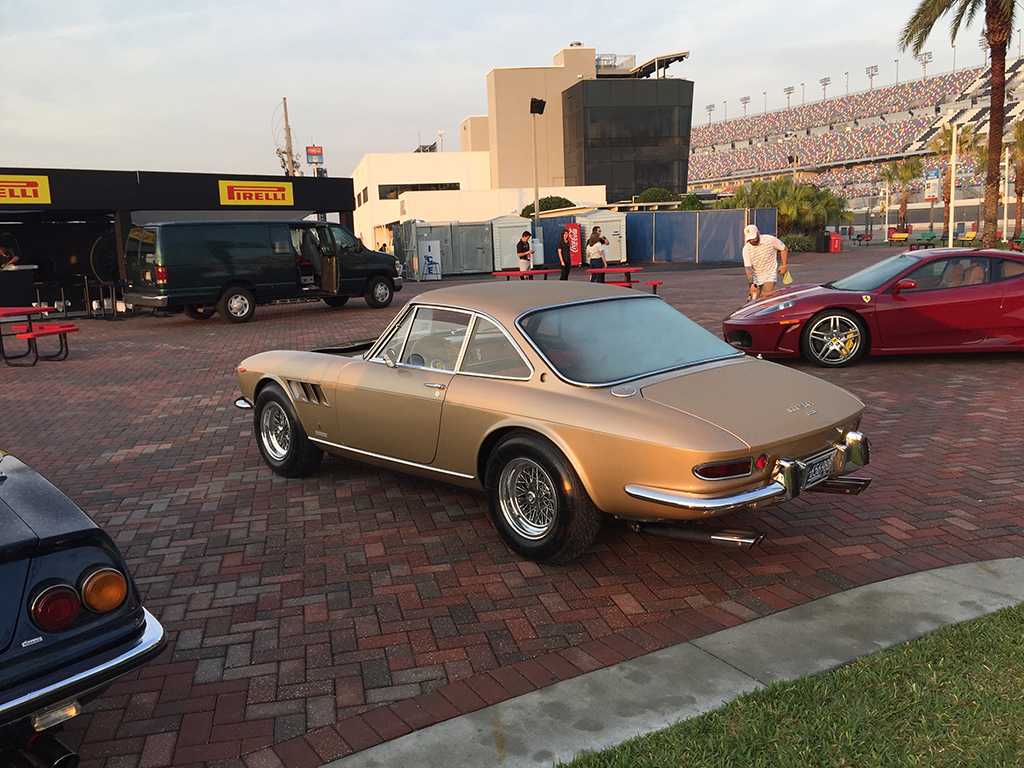 Many of you have followed this car in the last year looking at all the details of a low mileage, original paint, original chrome, un-restored car, and it was great to see it sitting in her place so people in the Vintage Ferrari Community to could see these details in person, but there’s always more to the story about how I got her here! 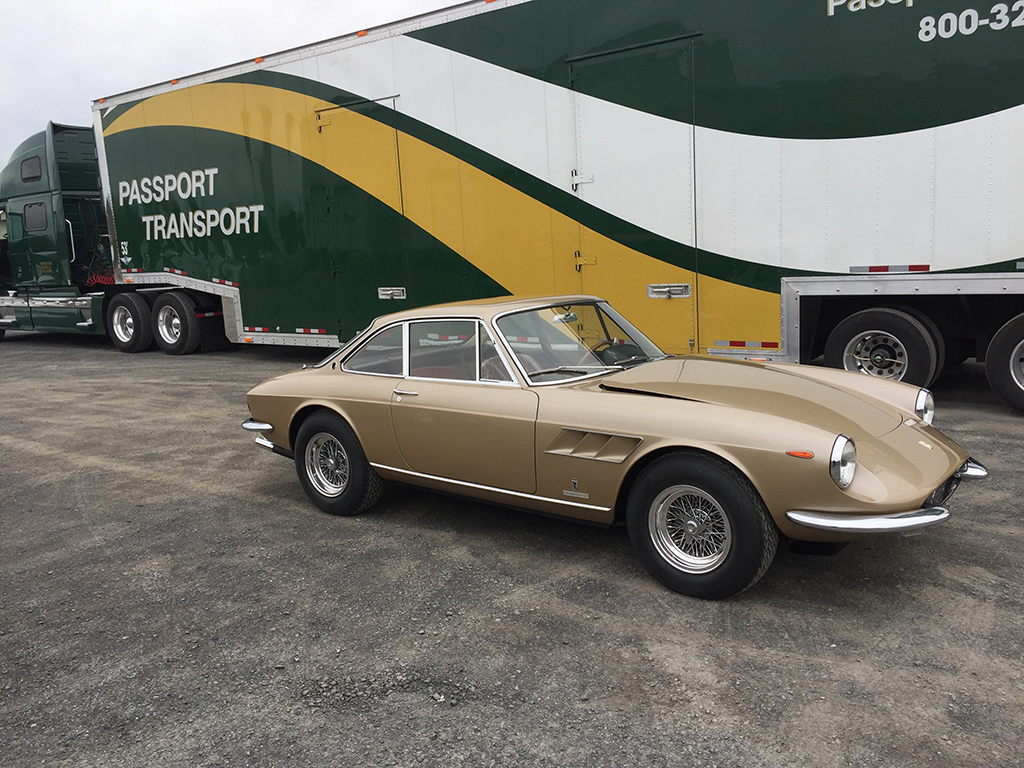 The week before Daytona, I met the truck heading to Florida to load the car ahead of my trip. The weather in the Northeast this time of the year is always changeable, and the truck driver worked with me to load the car one day early to beat the forecast of snow!

Our luck wasn’t with us on her delivery a few days later with thunderstorms and heavy rain in the forecast. I spent the morning in my hotel room across the street from the track watching the weather radar. Eventually, we found a break in the storm to off load the car. Unfortunately, the truck had to head south to deliver another car, but luckily Dan Mackay from Bradan was smart enough to rent a garage at the track and offered the GTC shelter!

Daniel works on newer Ferraris than what I normally work on, but there is always overlap, so we consult one another all the time. He owns the shop in Long Island, and is a great guy. Thanks for the space Daniel! 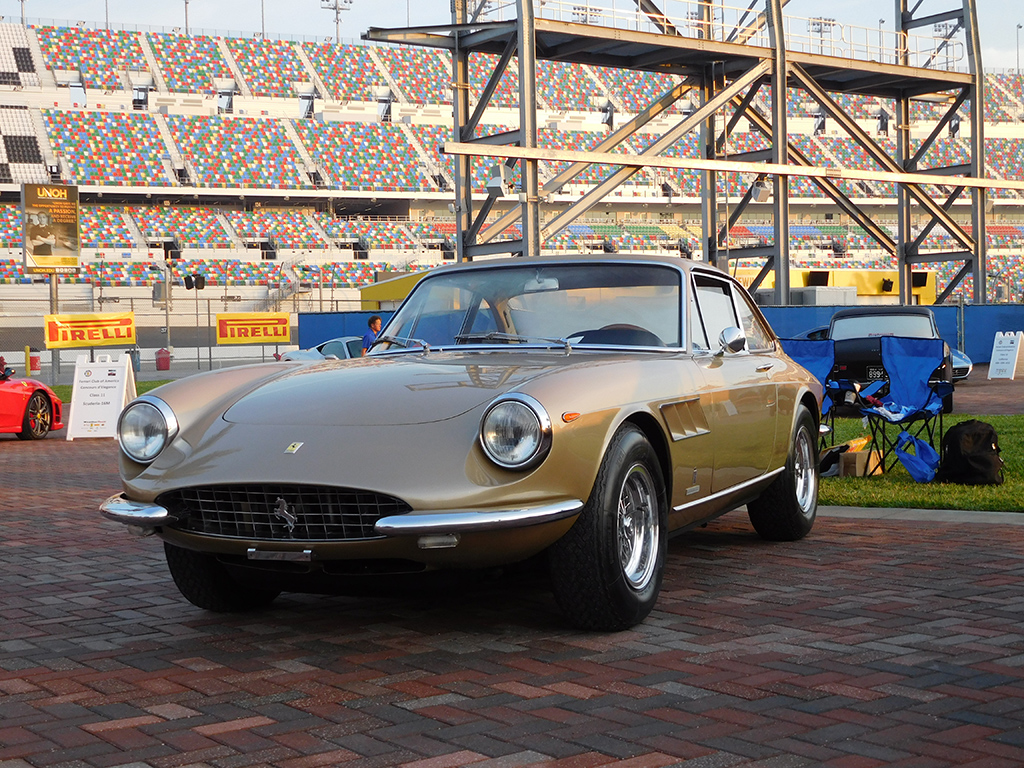 The rains subsided in the morning, and I drove the car the short distance to her spot on the show field. I spent a long hot day talking my voice hoarse showing anyone who wanted to see the car and how neat these original details were. 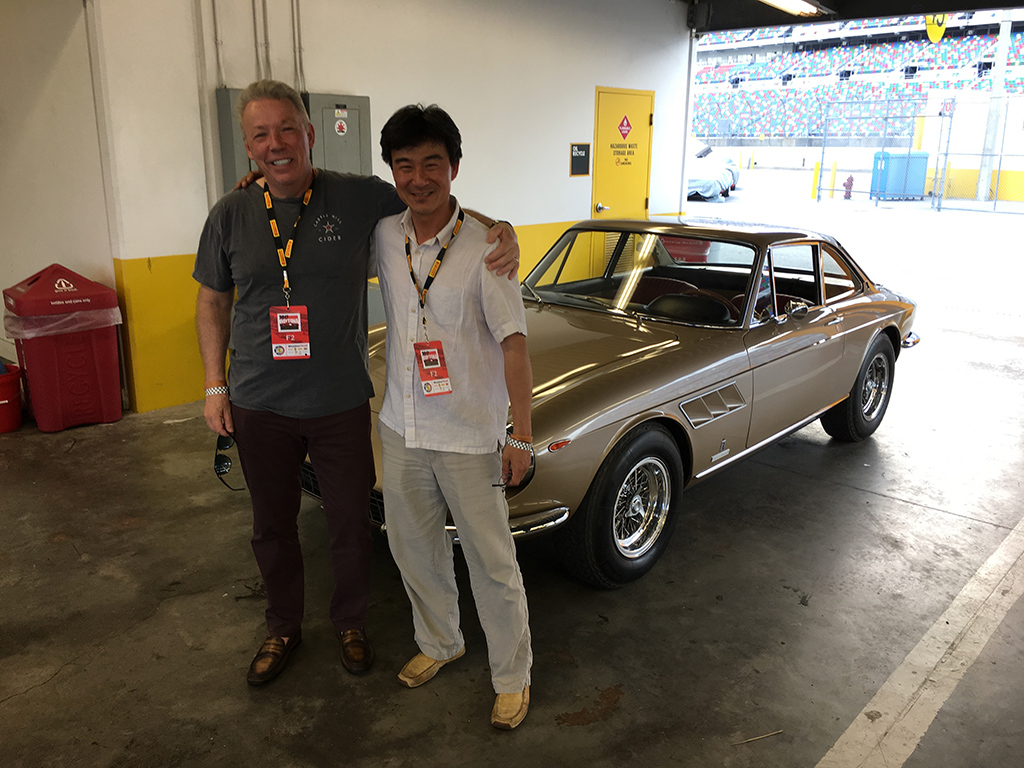 John, the owner of the car, attended his first Ferrari Club National event and was very excited to see his car among all the other great examples in the preservation  class. The great news is the judges agreed with our suspicions and awarded us a Preservation Platinum Award for the GTC! 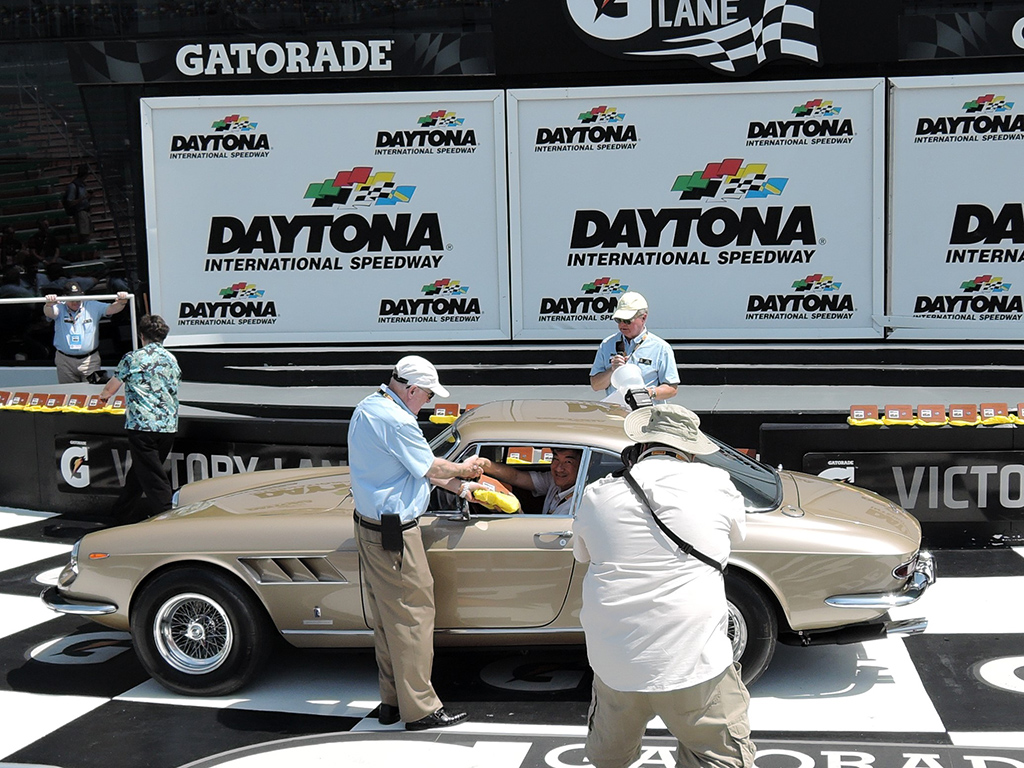 I was very happy to achieve what I set out to do with this car. The irony was I had very little to do with the preservation this car received over the past 50 years, but that did not mean there wasn’t a lot of work done to this car to preserve and curate its presentation to the community. Thanks John for letting me take this car to this level. 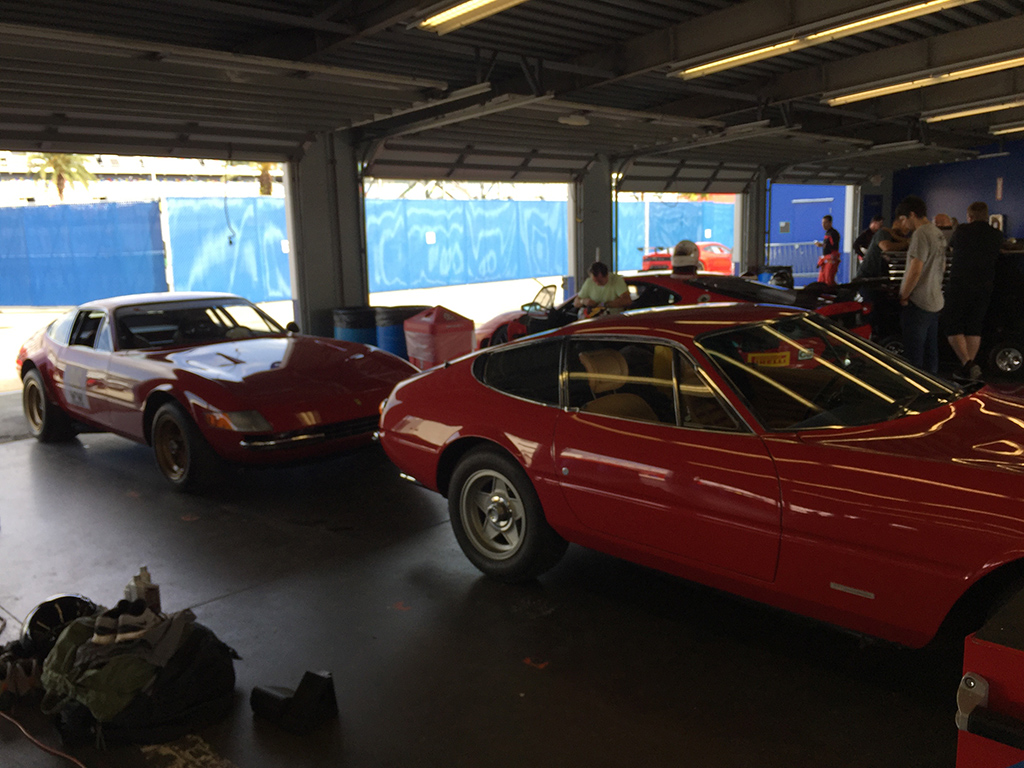 With my primary job this week over, I couldn’t think of a better way than to blast around the track in a Daytona at Daytona! A good friend, Bill Bowdish has a street Daytona (pictured in the back) that he modified into a raunchy, stripped down, flared, open exhaust track car that he brought out from Denver. There might be faster cars at the track, but there is nothing that sounds better than an uncorked Daytona engine echoing off the banking at Daytona Speedway! 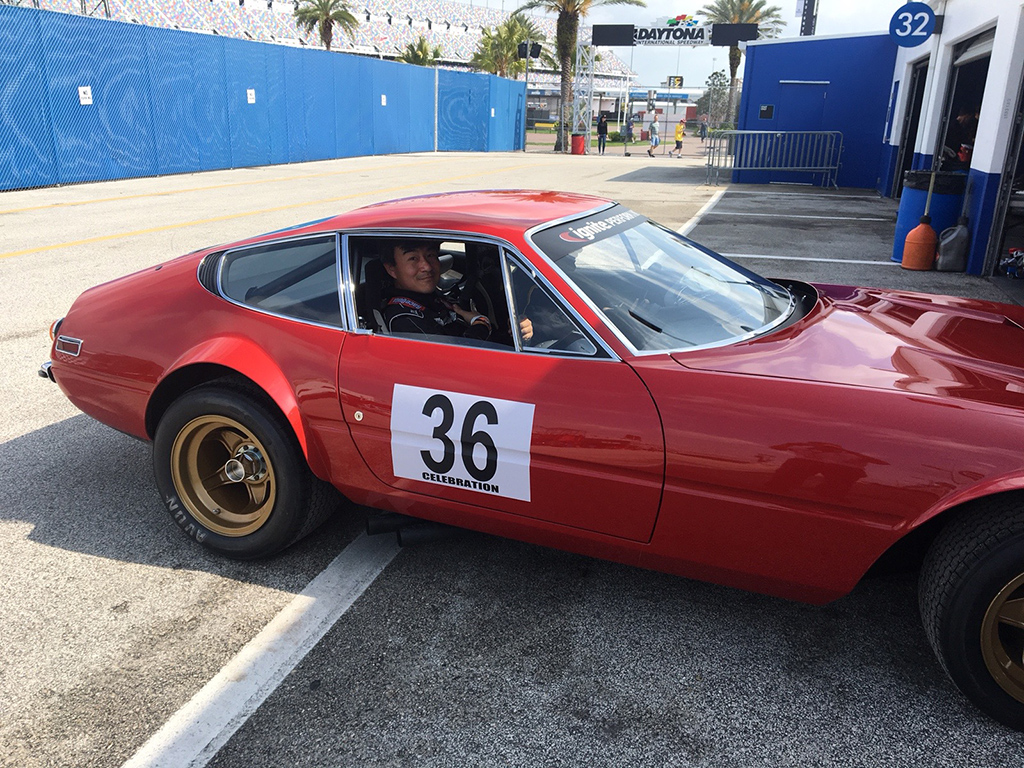 Bill offered me a ride in his car, and I’m sure glad I packed my helmet for just this kind of opportunity! The banking is fun and discombobulating the first time you see if from inside the car. Depending on how much speed you get, you can let the centrifugal force push you up the banking, but you have to attain a certain speed to keep the car stuck to the track. Once on the high degree banking, the world tilts away and instead of looking for the left apex out of the lower left, you have to duck down and look up to the left of the upper windshield! 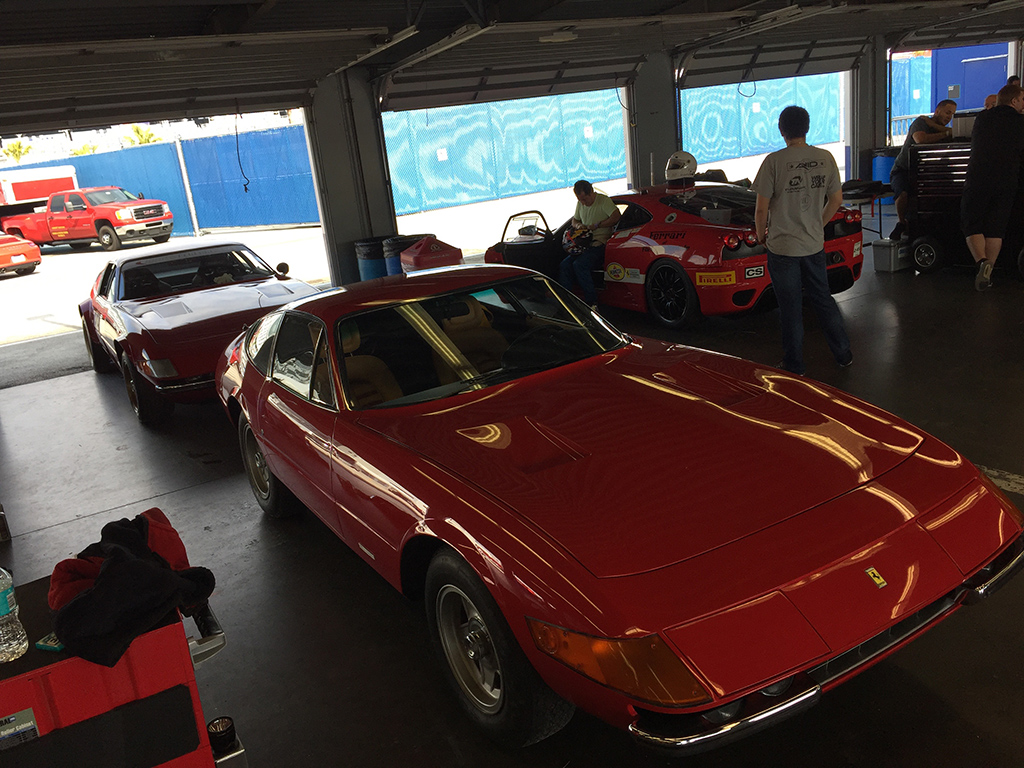 The other Daytona I was working on the last couple of months joined us in the Paddock which is a street driven car. Peter brought his car to Daytona from Connecticut and drove it down. Even though he loaded the car on the Autotrain in the DC area, I’m sure he put more mileage on this car than many of the other Daytonas on the show field this past week!

He told me his trip down was flawless, but did experience a little bit of misfiring towards the end. I looked at his resistors near his coils, and saw there was some deterioration of the boots covering the connections. Since we had access to a garage and an offer from Bill to use his tools, I told Peter to bring his car down to take a quick peek at his ignition wires. He still had to drive the car back to CT, and it would not have been a bad idea to look.

Luckily, after cleaning up the connections, I found a coil wire had come loose from its crimped ring connector. The connection was being held in place by the rubber boot and just making contact. The missing Peter was experiencing the other day in the rain was probably from this loose connection! Bill had a new connector, and we crimped it all in place. It would have been a lot worse if Peter discovered this problem somewhere on i95 heading north! 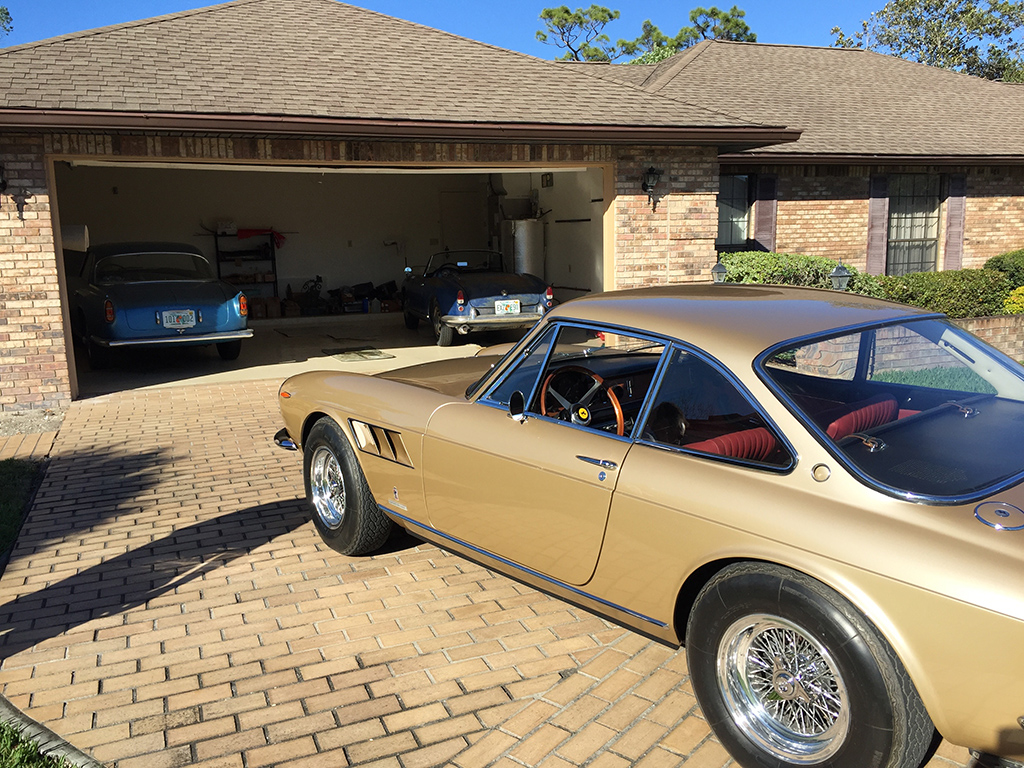 Just when I thought I was done fixing problems, I got a call from the transporter. He wasn’t going to be able to pick up the GTC from Daytona until Saturday!? I was flying back to NY on Friday. I not only needed to find a safe place to stash the Ferrari until Saturday, but also leave it with someone who knew how to move it safely to load onto a truck! Luckily, my friend Art Taxman, lives 20 minutes from the track and was kind enough to help. Thanks Art, I owe you and everyone else who bailed me out this weekend big time! 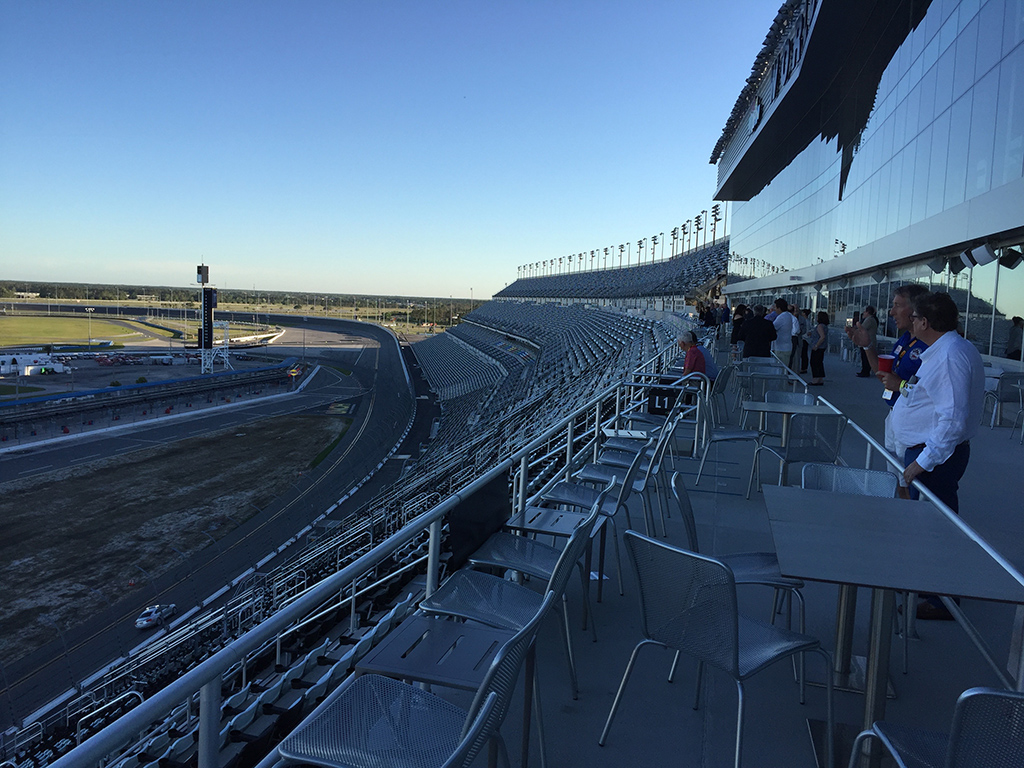 The Banquet was held at the Daytona Speedway Clubhouse, and was nice ending to a great event. Great job to everyone involved in the hard work to put this event on. Thanks!