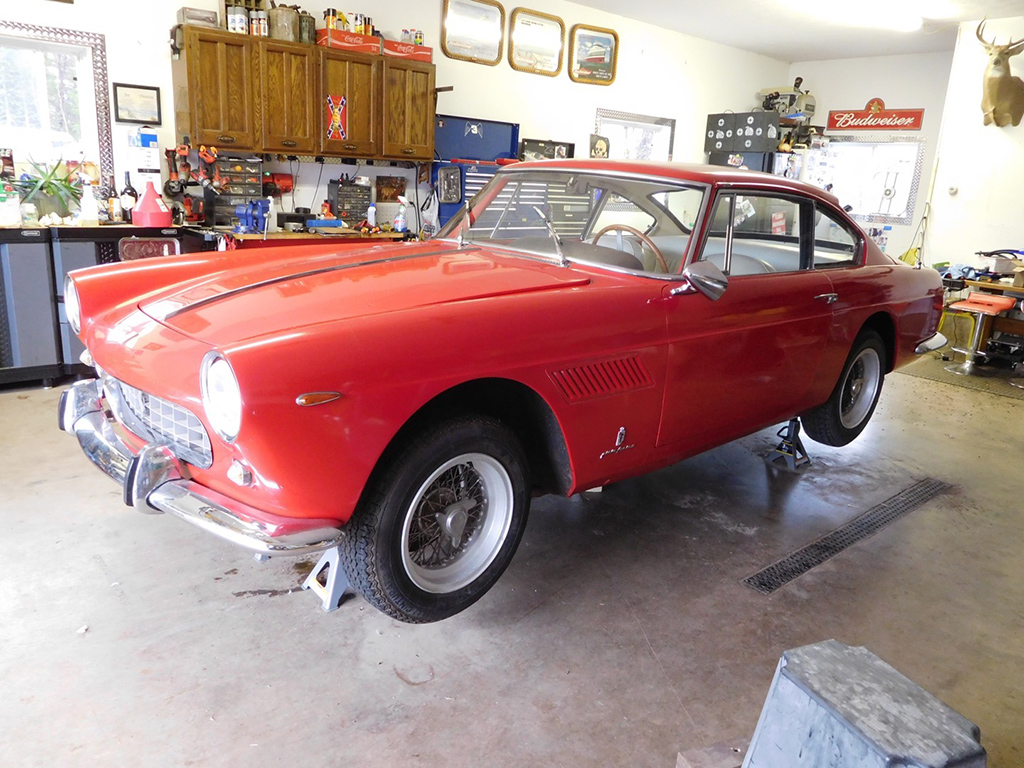 I was cc’d in an email exchange Tom Wilson, the 250GTE Registrar, had with an owner of a GTE in Marquette Michigan. I have to admit, I had to look up exactly where Marquette was, and found it was in the Upper Peninsula of Michigan and a pretty remote part of the country. In the the land of “side-by-side” four wheelers, and snowmobiles (sleds), the people of the U.P., (Yoopers) are not known for their Ferraris so I was intrigued. It turned out the serial number of this car had been off of the GTE Registry’s radar, so another lost car was found!

After a couple email exchanges, the owners of this car asked if I would go to the U.P., inspect the car, and help start the dormant Ferrari. After juggling my schedule around, I booked a flight to Marquette and packed my tools. 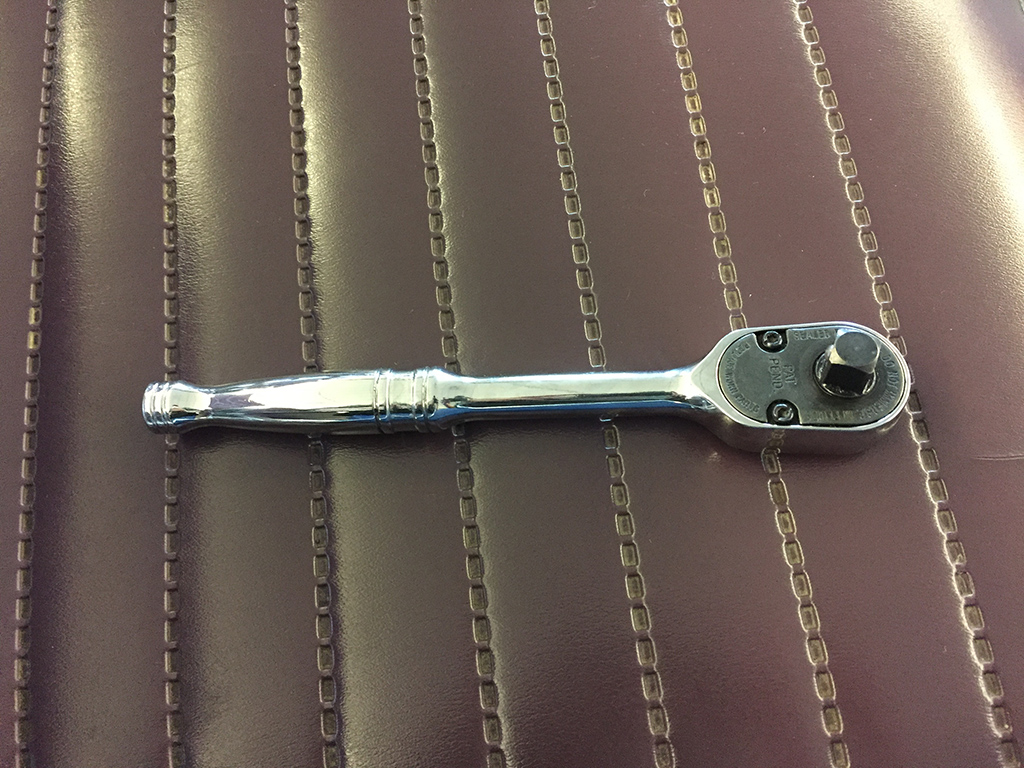 I usually pack a small kit that can pass through airport security, but this time, they measured my ratchet drive and found it to be 1/4 inch longer than the accepted TSA length. I didn’t want to lose my $100 dollar snap-on ratchet and promised I wasn’t going to loosen any bolts on the plane. They believed me and let it pass. 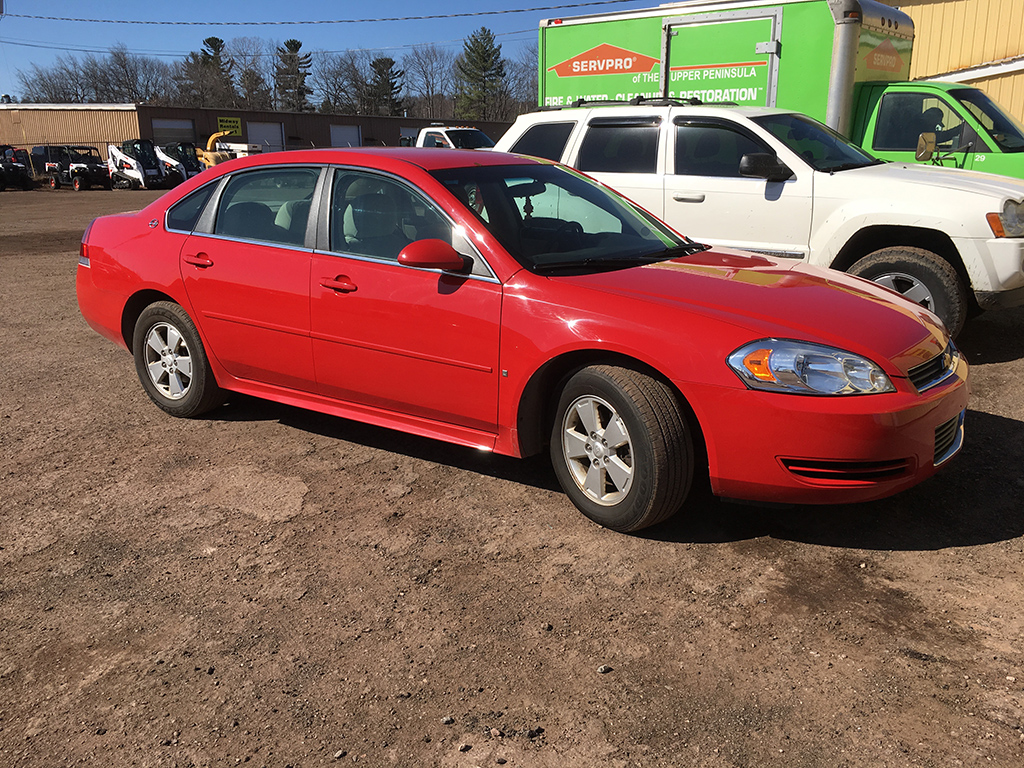 The owner of the car was nice enough to leave a car for me at the airport so I didn’t have to rent a car. He texted me a picture of the car, so I could find it when I landed later that evening.

Don’t you love small towns where you can leave a car at the airport with the key hidden behind the gas lid? 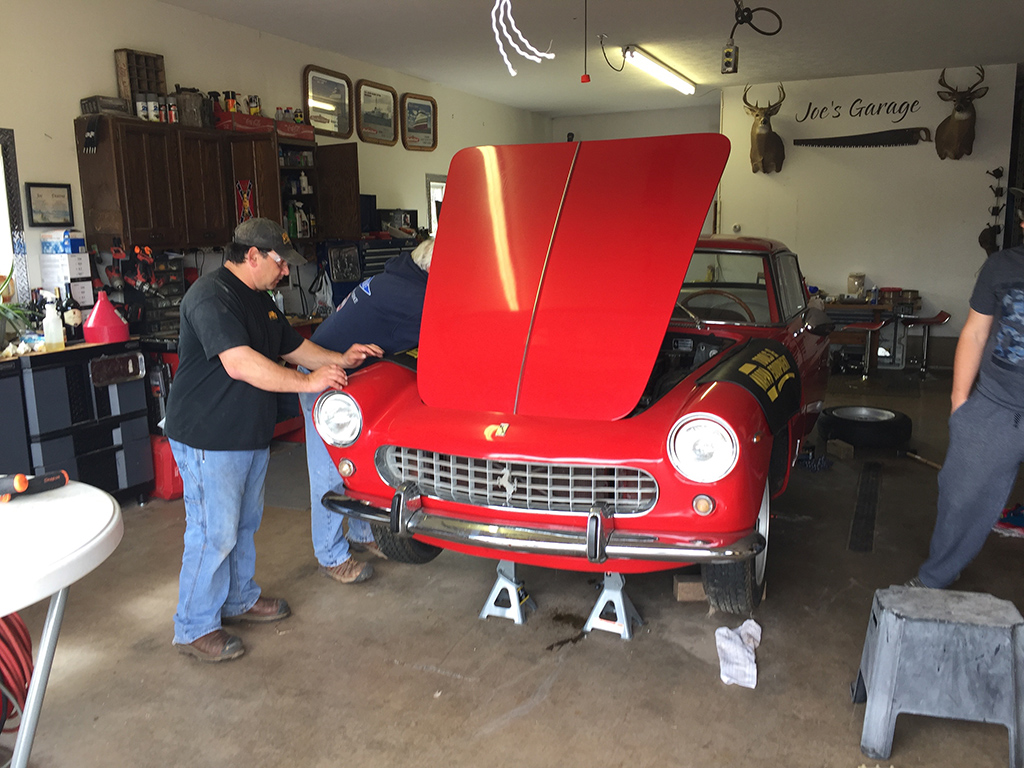 Joe’s father bought this car in the late 70s on a business trip to Las Vegas and it’s been with the family ever since. It was his first time playing craps, won big, and decided to roll the dice again on a Ferrari when he cashed in his winnings! He drove it for a few years, and had the interior reupholstered (in vinyl), painted the car, and had the engine rebuilt in Wisconsin. The cost of the rebuild made him hesitant to drive the car as I’m sure the rebuild cost more than a new car, so it spent the next 30 years used sparingly, but mostly parked. 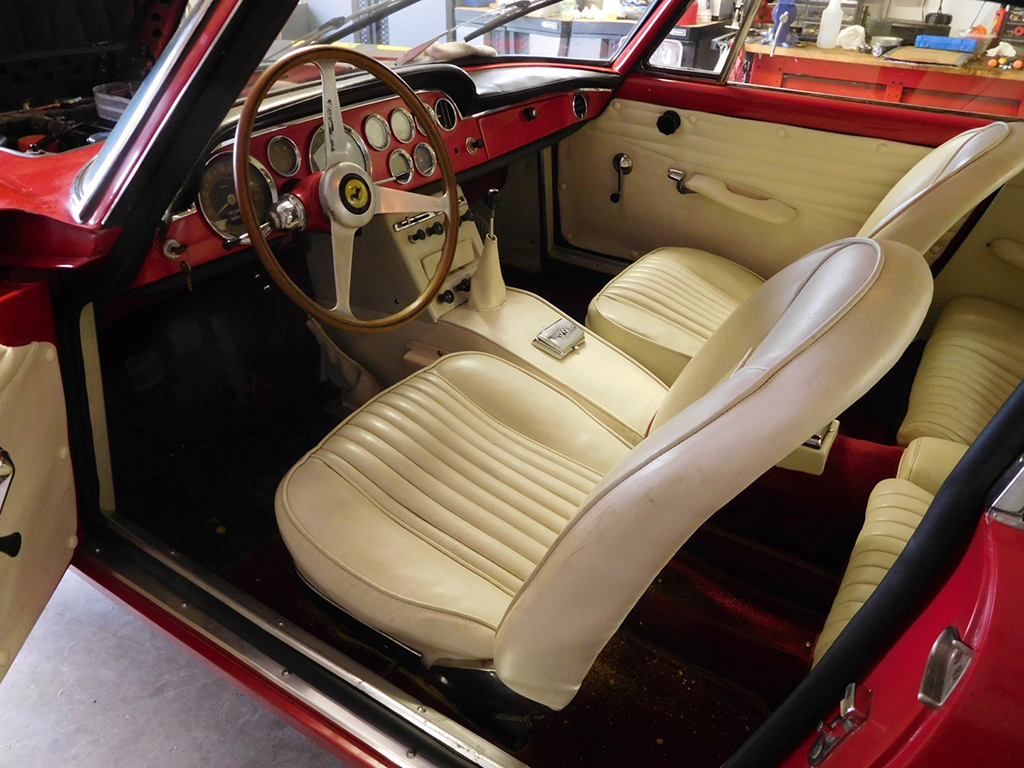 There never was much documentation for Vintage Ferraris, and you can imagine the challenges of owning a GTE in the wilds of the U.P., but with only 50K miles on the odometer, this car had many of its original parts. 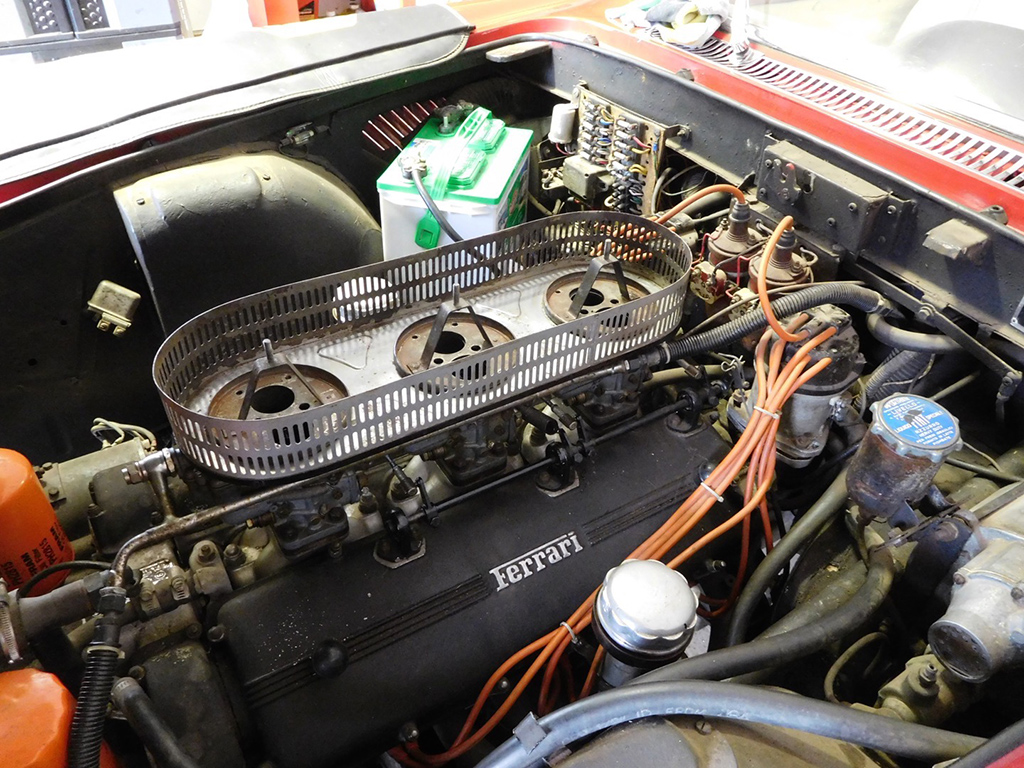 My job was to inspect the car, assess its condition, and see if I could get the engine running. In Joe’s heart, he would love to keep the car, but ultimately knew this car was probably better off in the hands of someone else. The sharks start circling when a car like this comes to market, and I wanted to give them a honest opinion on this car’s condition, and current prices. 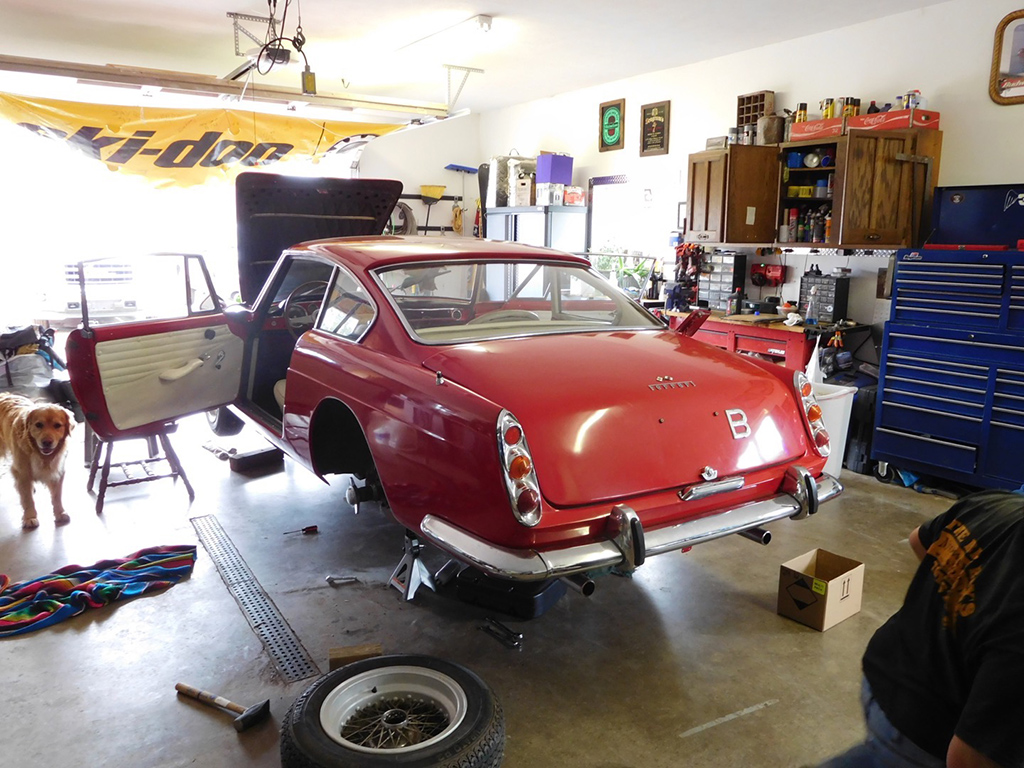 Joe had done some work on the car prior to my arrival, so the gas tank was drained, and he attempted to get the fuel pump to work. I ordered a couple of rebuild kits and filters and had them waiting for my arrival, so we got to work. 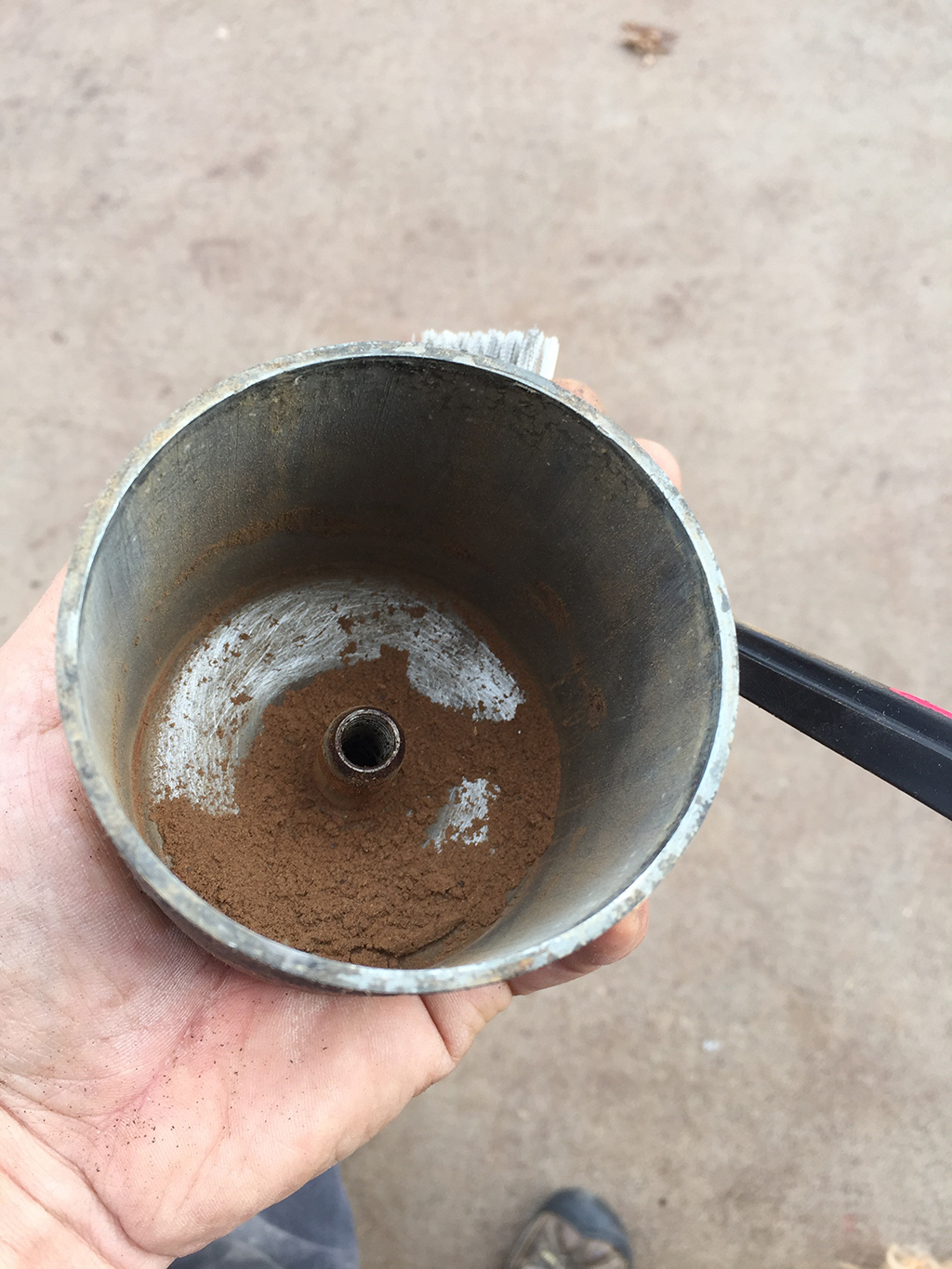 There was no sign of the cartridge filter, so I cleaned out the fuel filter housing and installed a new filter. I rebuilt the electric fuel pump and got it back in the car and filled the tanks. At the same time, I showed the guys how to clean out the accelerator pumps, and got the carbs working a little better. 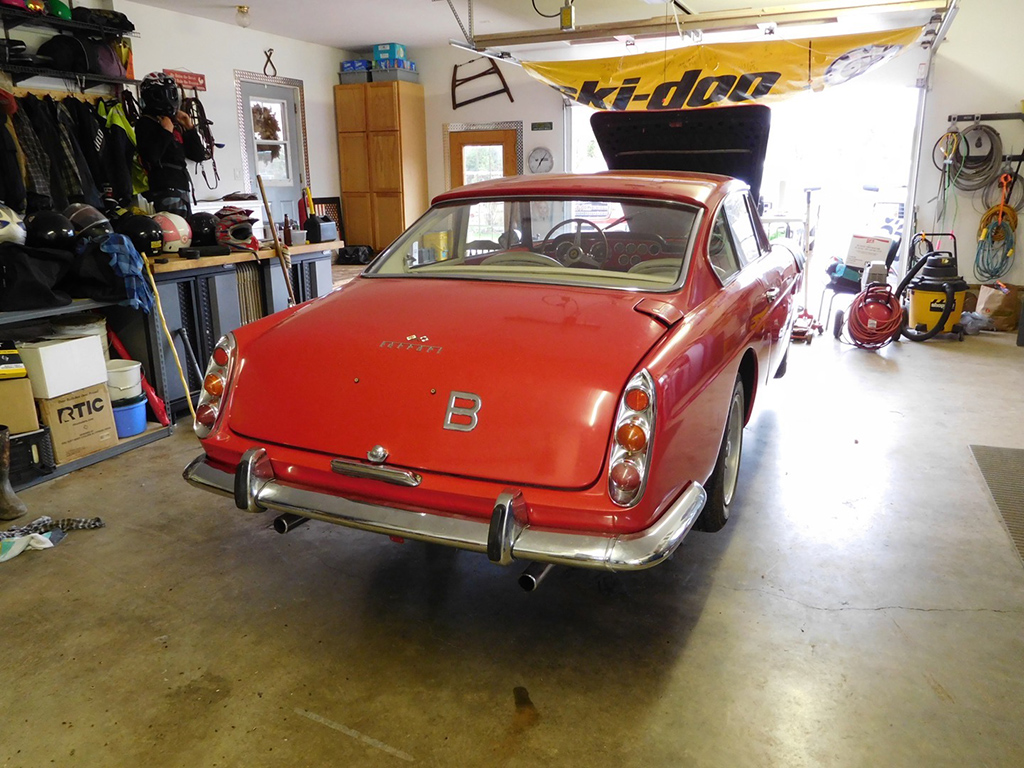 By midday we had the engine running with a decent idle. I’m sure the brakes were shot, but the parking brake seemed to be holding. I’m glad it was raining outside, because I would have been too tempted to take this old girl for drive down the road!

If you’re interested in a project 250GTE, this is a nice candidate. It needs a little work, but the engine shows good compression and oil pressure. The brakes need to be rebuilt, but if you don’t mind the vinyl interior and Chevy red paint, you could drive this V-12 Ferrari just as she sits. Shoot me an email if you’re interested.