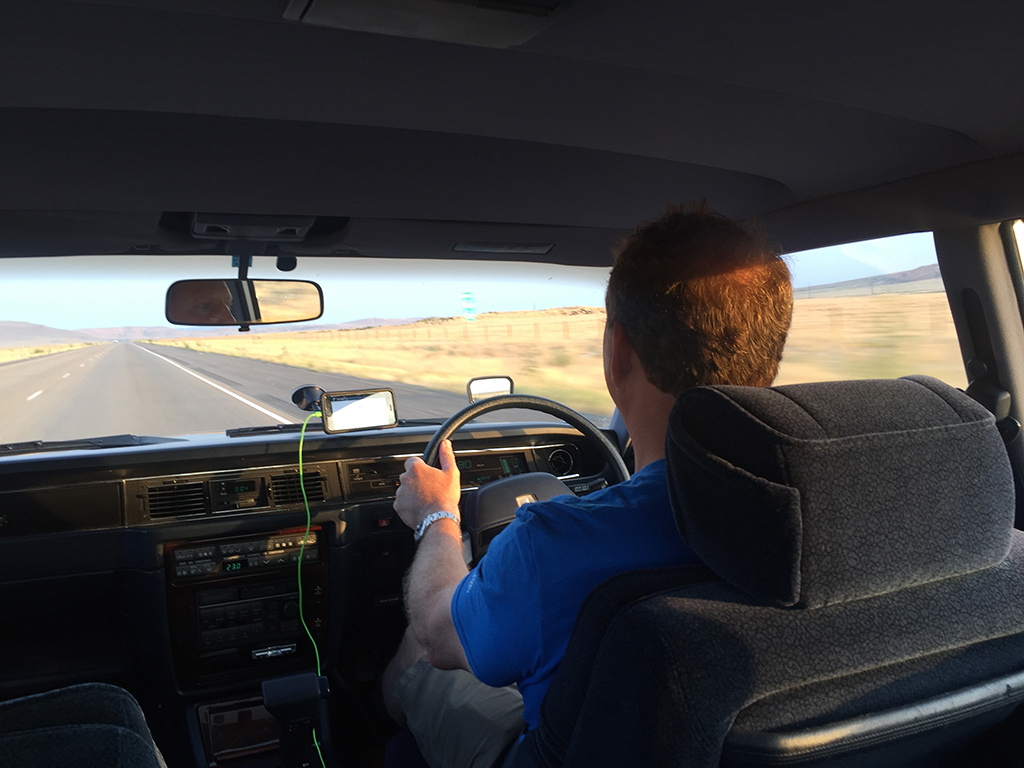 We stayed in Salt Lake City Utah, and left before we could be converted to the Church of LDS. The drive out on Interstate 80 was short, as we started to see salt mining operations along the highway heading out to Bonneville. 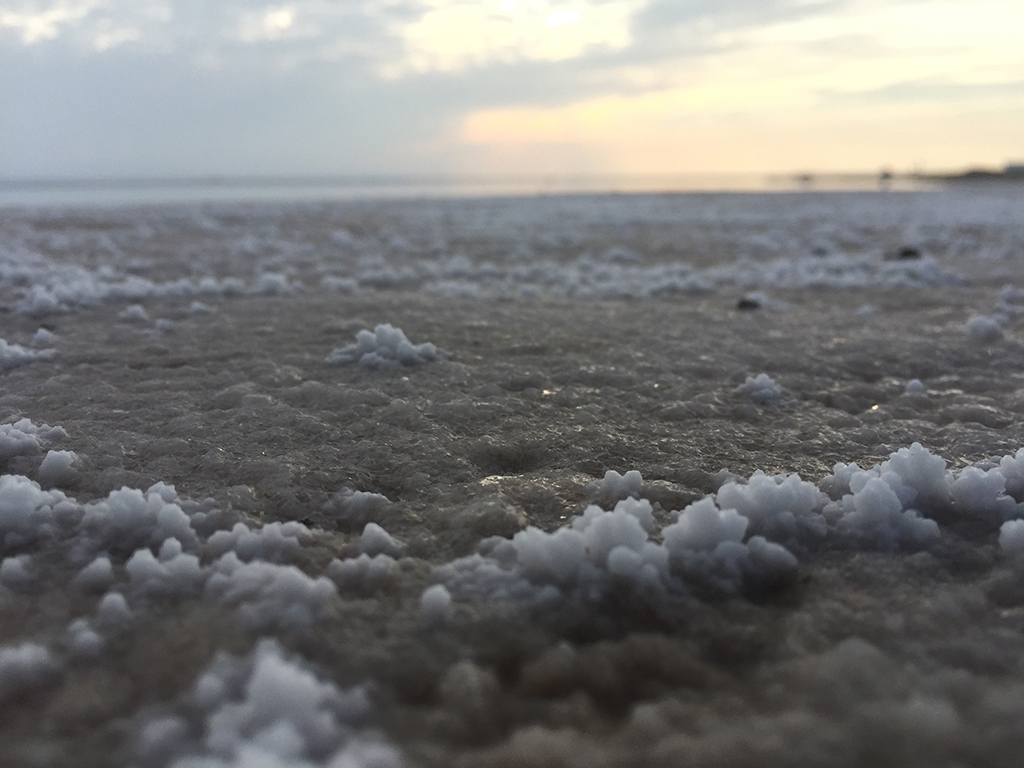 The Bonneville Salt Flats is a salt pan west of Salt Lake City. The salt and minerals washed down from the the surrounding mountains collected in the vast basin for thousands of years. Every winter, snow and water collects, dissolves the salt, evaporates, and leaves a large area of salt crust that has for decades given a nice level place for people to drive fast! 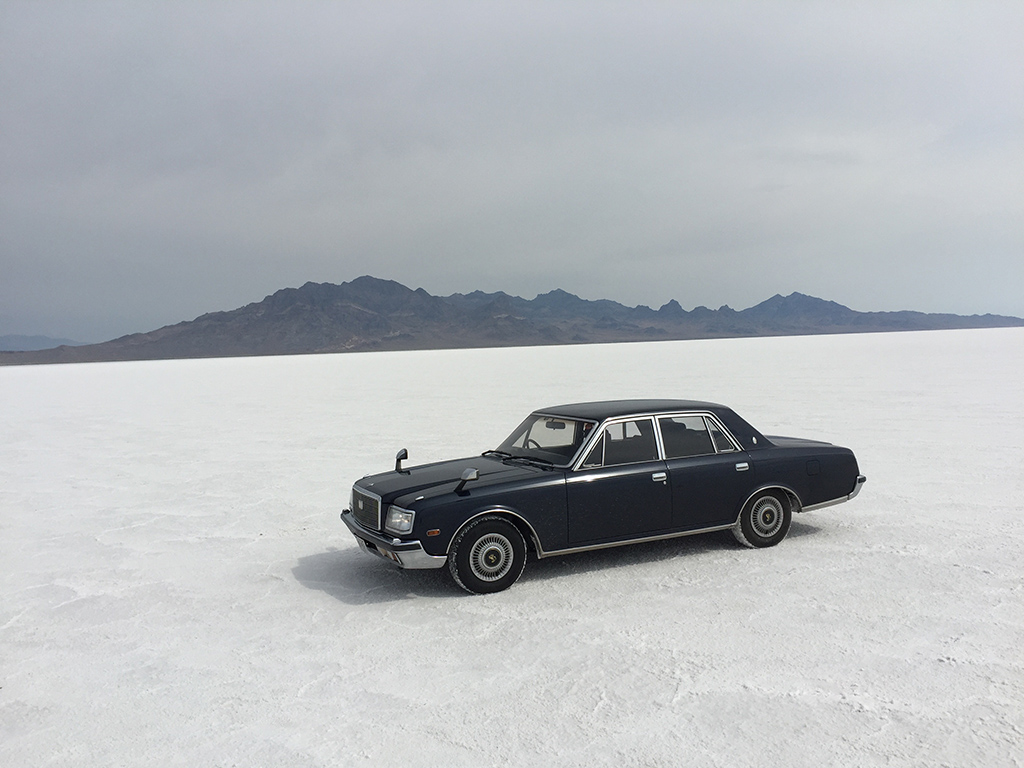 Brad and I have always wanted to attend “Bonneville Speed Week” in mid August when the conditions are right for speed record attempts, but it occurs the same time as the Monterey Car week. This year we both decided it was worth arriving in Monterey a couple days late to experience Bonneville! 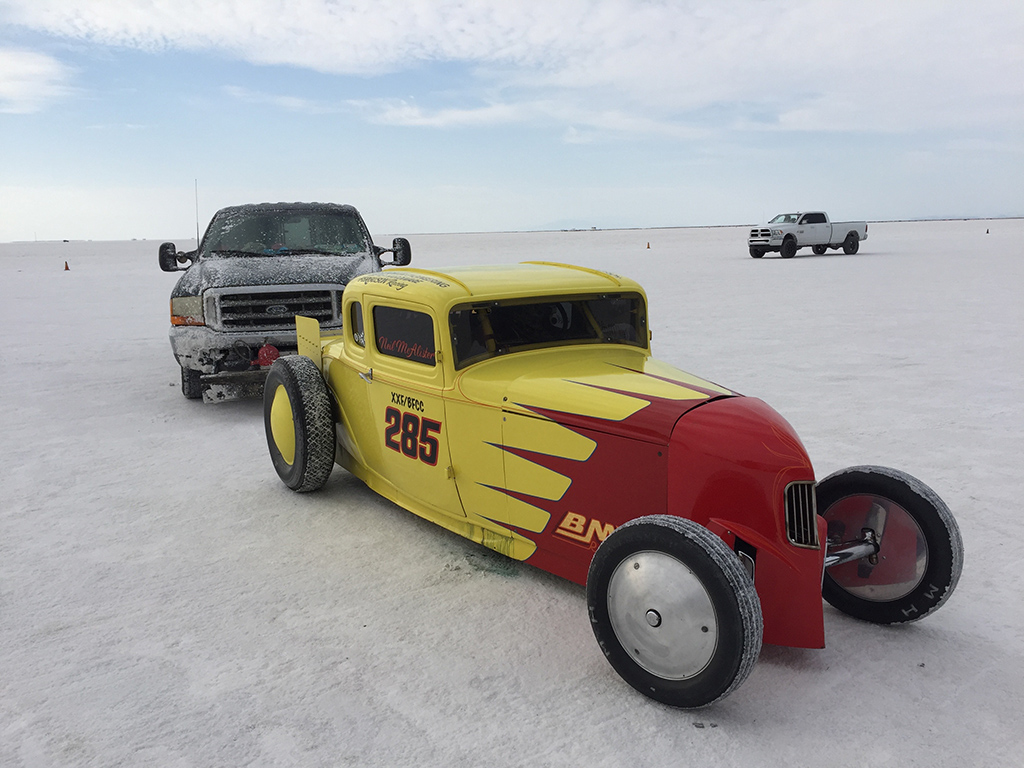 The contrast of car enthusiasts was dramatic from Bonneville to Monterey. This desolate place in-the-middle-of-nowhere-Utah was a gathering of dedicated motor enthusiasts that all traveled a long was to be here for one purpose, SPEED! 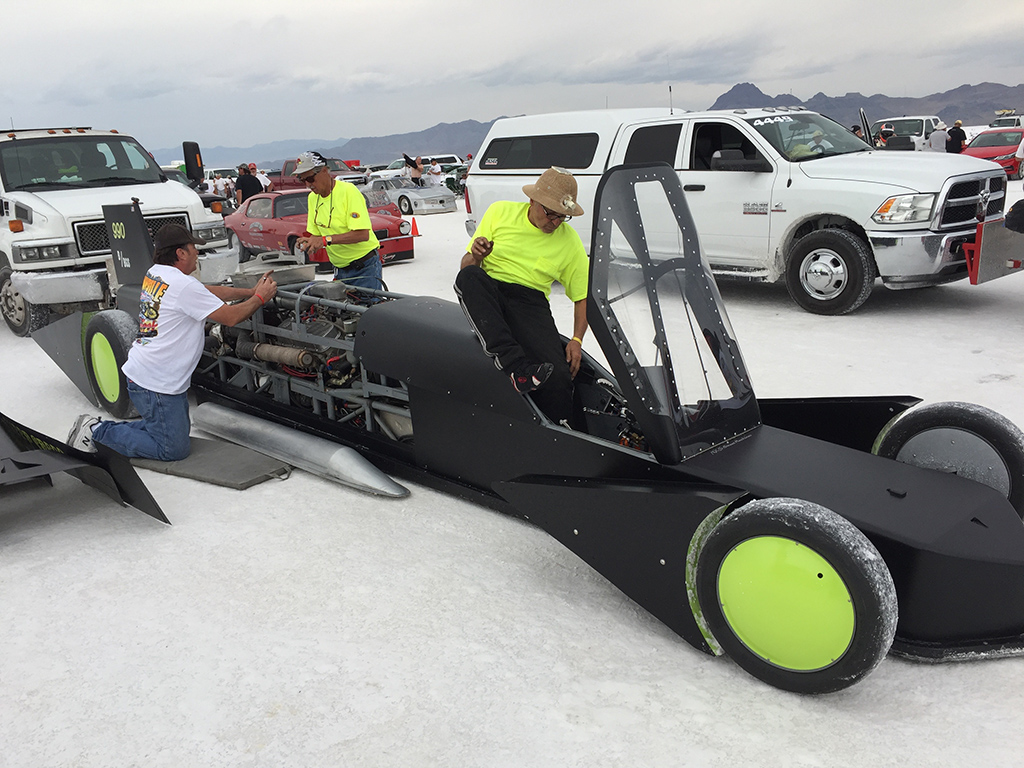 There were no cocktail parties, or glamorous auctions with high dollar displays. Instead, there were sun drenched racers working hard at preparing their cars to go fast! 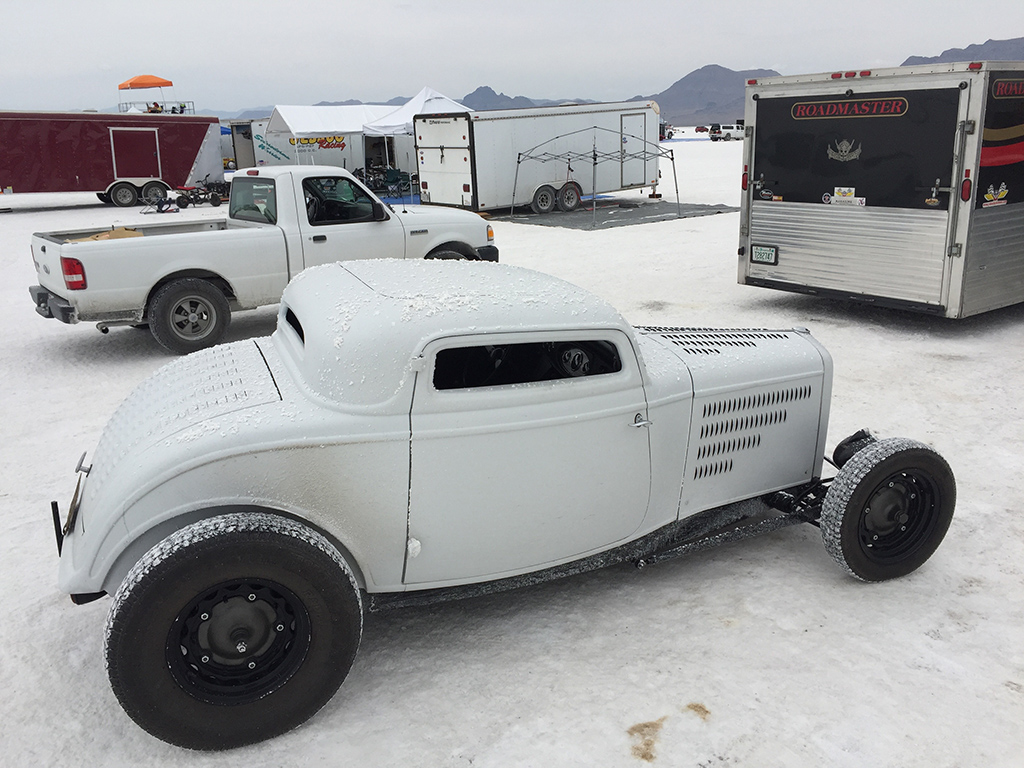 People may forget that the hod rod culture grew out of speed records on salt pans in California and Utah. They originally chopped the tops on 32 Fords not because it looked cool, but because it literally cut down on wind resistance. Laying back a windshield and stripping off the fenders were all tricks the returning veterans of WWII did to their cars to get their thrills. This was the temple that you came to worship the Gods of Speed! 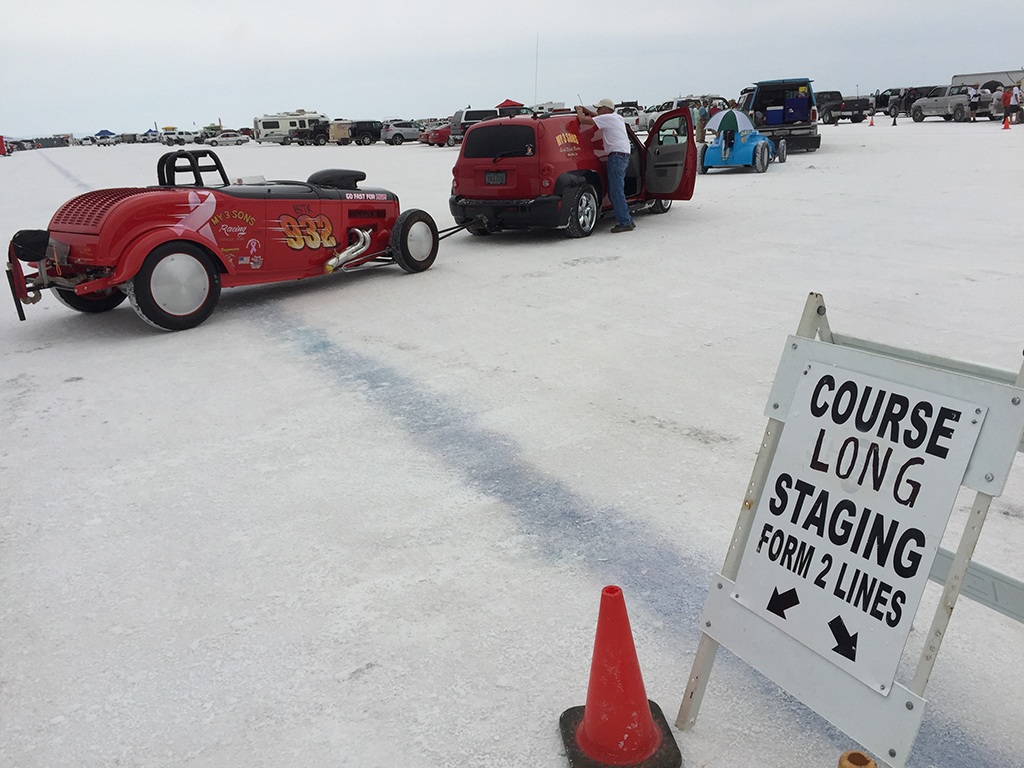 The Bonneville Salt Flats has been a region of change. Speed week was canceled two years in a row in past years due to bad salt conditions. The balance of winter snows, spring melt offs, and summer evaporation forms the inches thick salt crust on the wide expanse, and any change in weather or mining can affect the conditions for Speed Week. 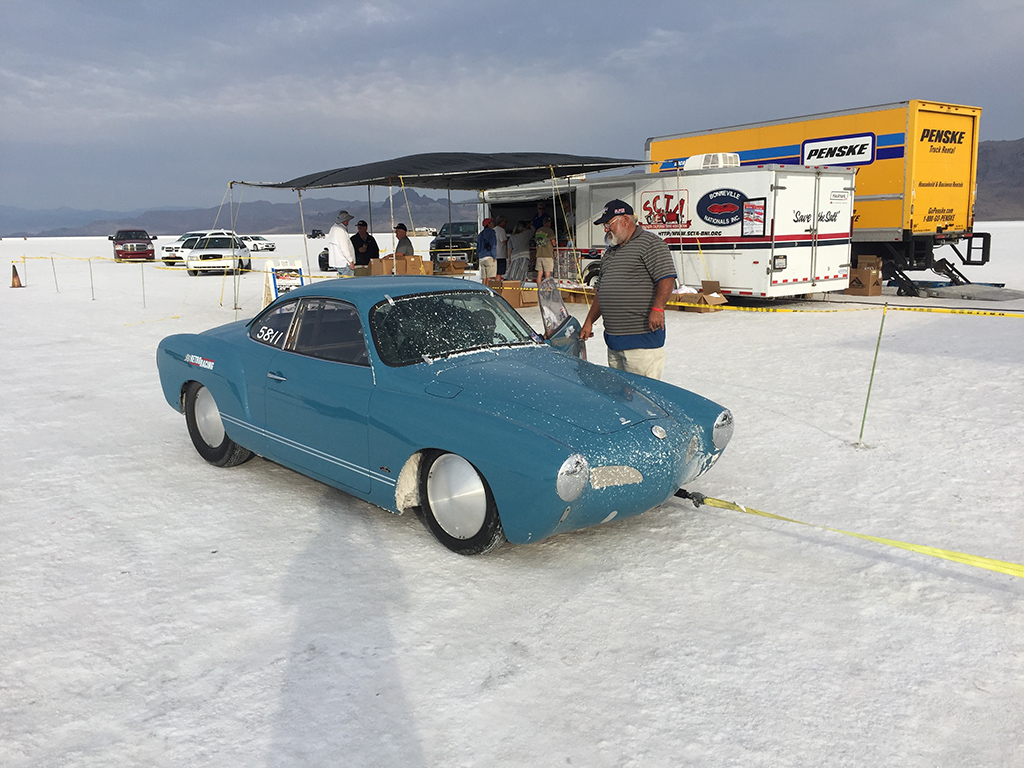 I can imagine the disappointment for these guys when preparing to run a car for months or years is dashed because the Salt Flats weren’t ready. 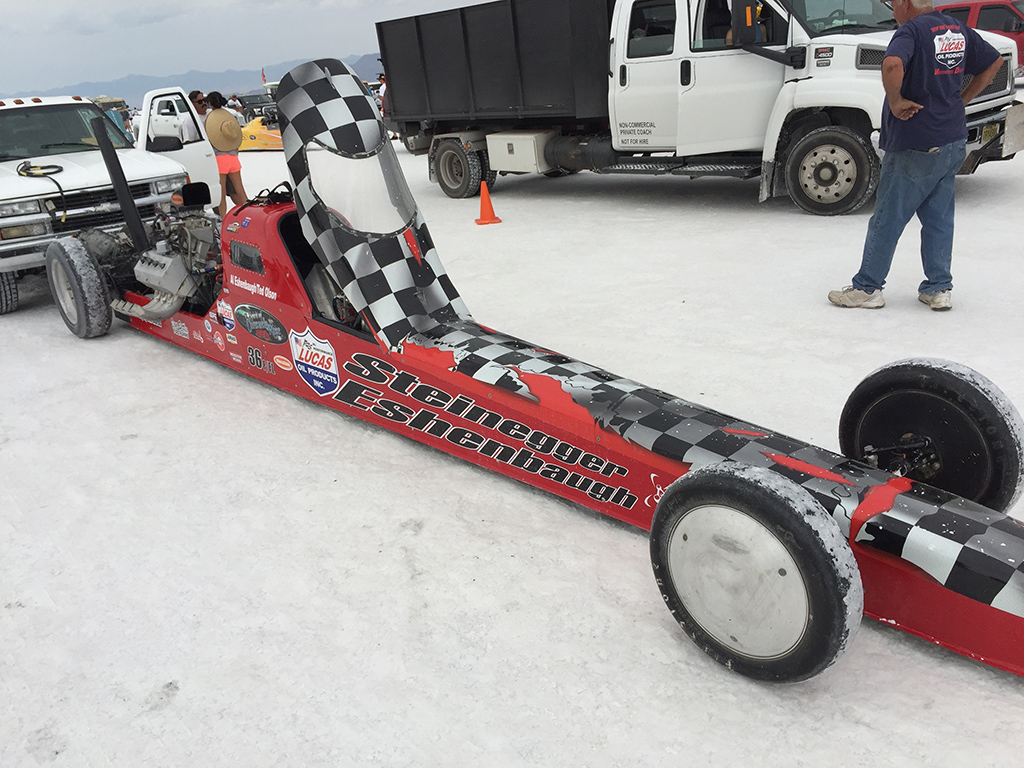 Brad and I were very lucky pick the right year to visit Bonneville, because the course was open, and the cars were running. It was fantastic to see the variety of cars out there. The Southern California Timing Association is the organization that runs The Bonneville Speed Week, and they keep a record book and rule book on what you can run. Classes are broken up in categories like piston driven or turbine driven, wheel driven or jet propulsion, number of cylinders and displacement, and so on. Record chasers study this book like a bible and decide what car they want to run, and if they want to chase a particular record. 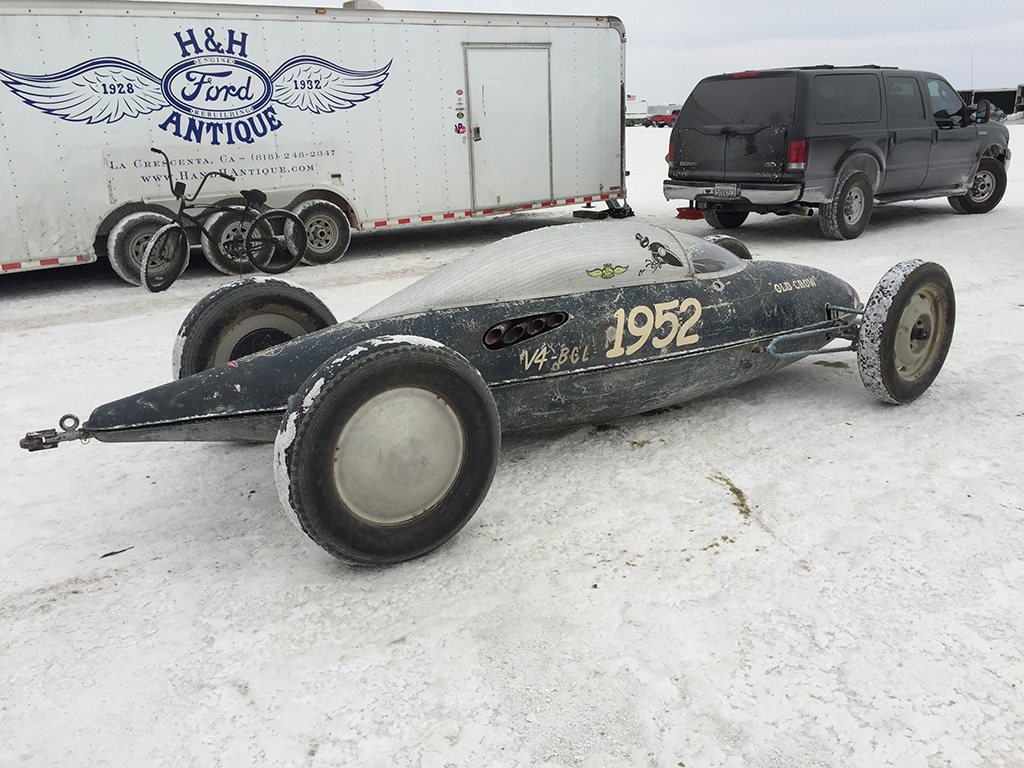 Everything from modern carbon fiber streamliners to WWII surplus belly tanks were running on the salt, and there was a class for them to break a record. Even if you didn’t come to break a particular record, personal bests are cheered. The SCTA gives out “200mph Club,” and “300mph Club” hats and patches that puts you in an exclusive club with some pretty serious street credibility! 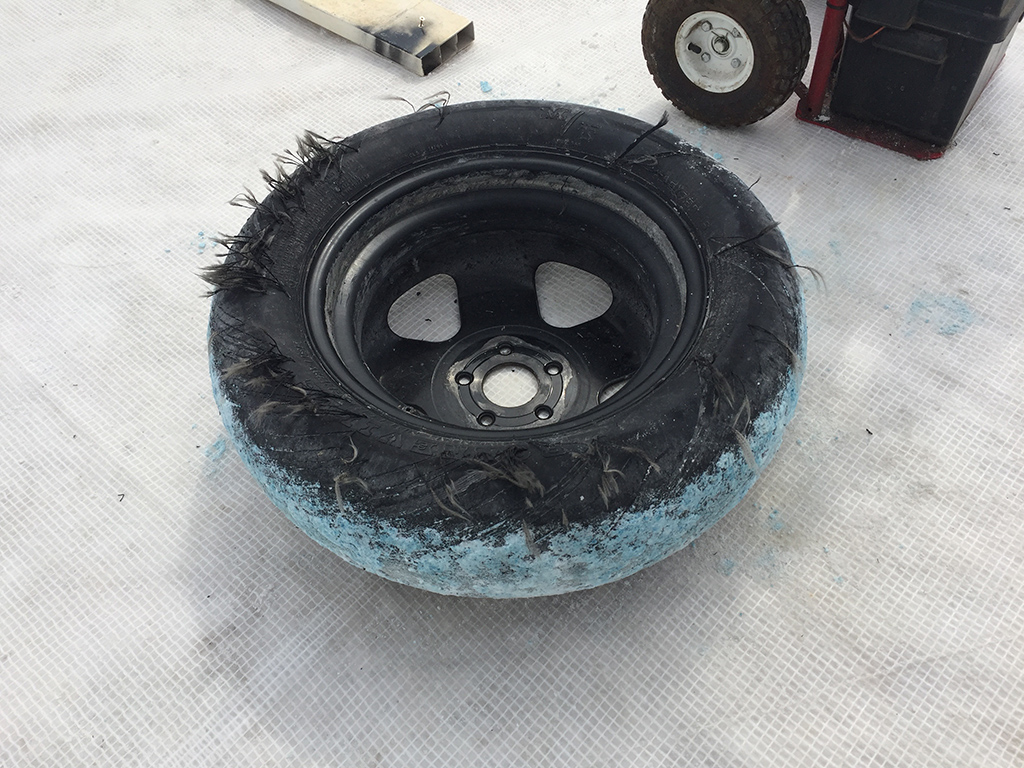 Running at high speed is not without risk. Cross winds, ruts in the salt, and mechanical failures can cause things to go horribly wrong. The salt is not as smooth as it looks in these pictures. I’m sure conditions were better in years past, but when we were driving on a surface that resembled a freshly scraped dirt road. The actual race course stretching miles into the distance is dragged by a primitive scraper that looks like a sled, but we were told it’s not much smoother. When a car loses control, slides sideways, gouging up the salt, the race officials will move the course over to an unblemished part of the course, but this area often doesn’t have the time to be prepared as the old one. 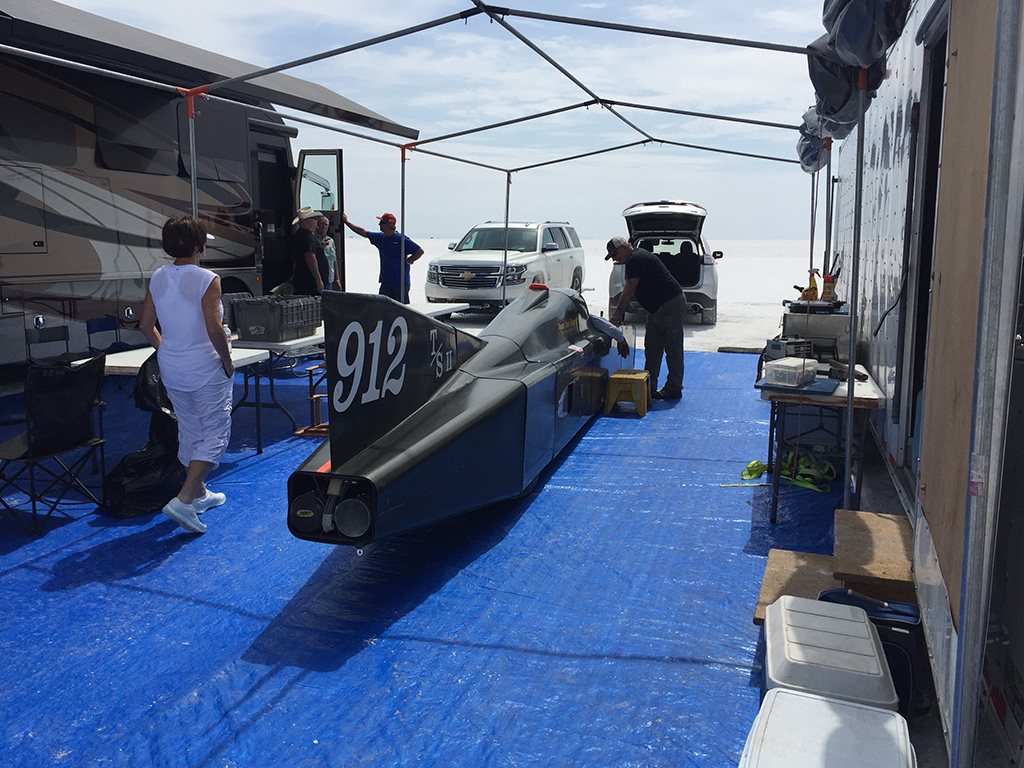 All the racers on the salt were great, and willing to talk about their cars and their record attempts. I looked up an old friend and long time Ferrari collector that has moved away from Ferraris and into land speed record attempts. 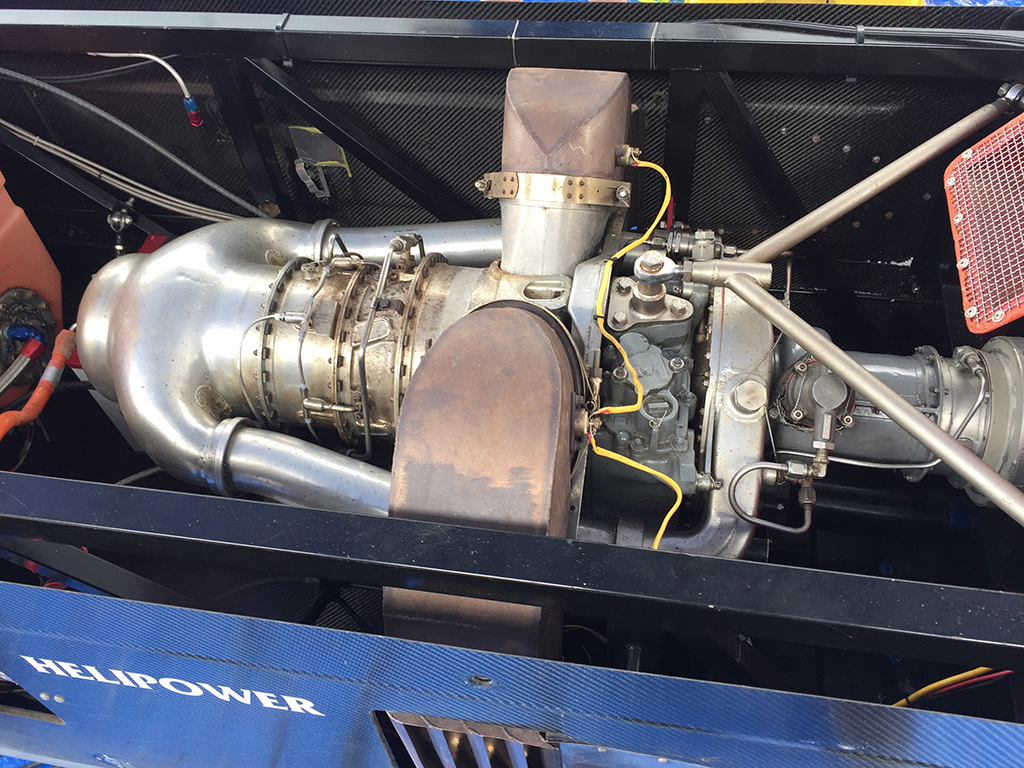 The enthusiasm for racing his Ferraris has planted itself firmly in running this turbine powered streamliner. V12s might be cool, but it’s got nothing on 60,000 rpm going through a reduction gear to drive the rear wheels at over 300mph! 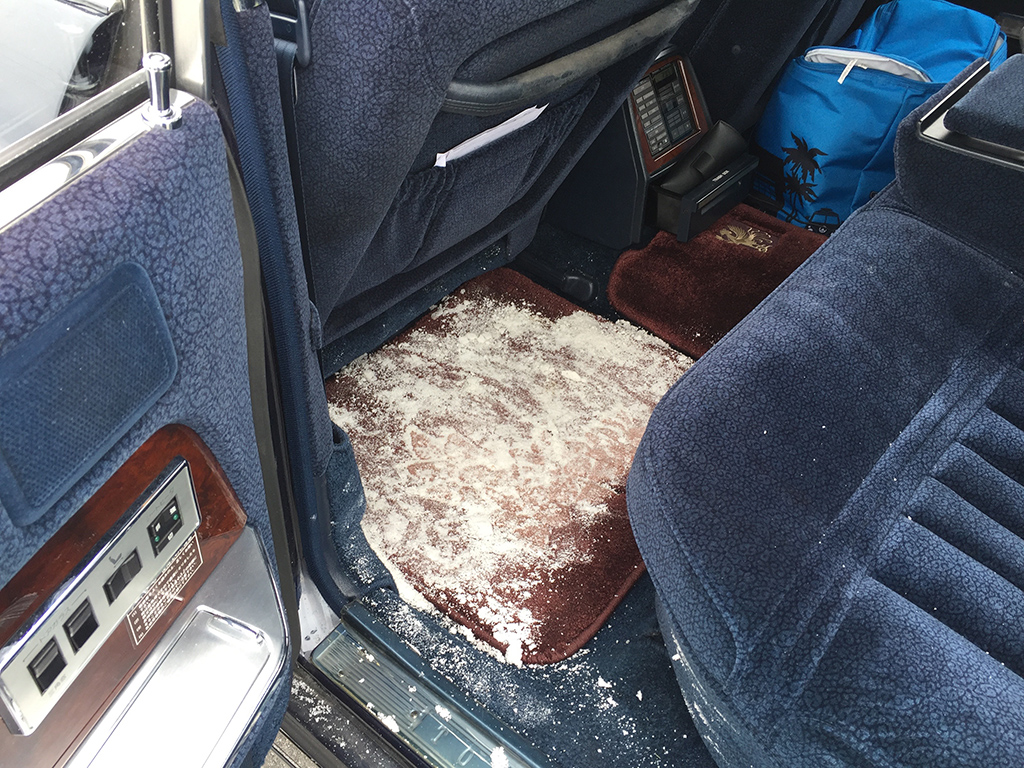 Besides loads of pictures and great memories, we were collecting quite a few souvenirs in the form of salt inside and outside of the Toyota Century! 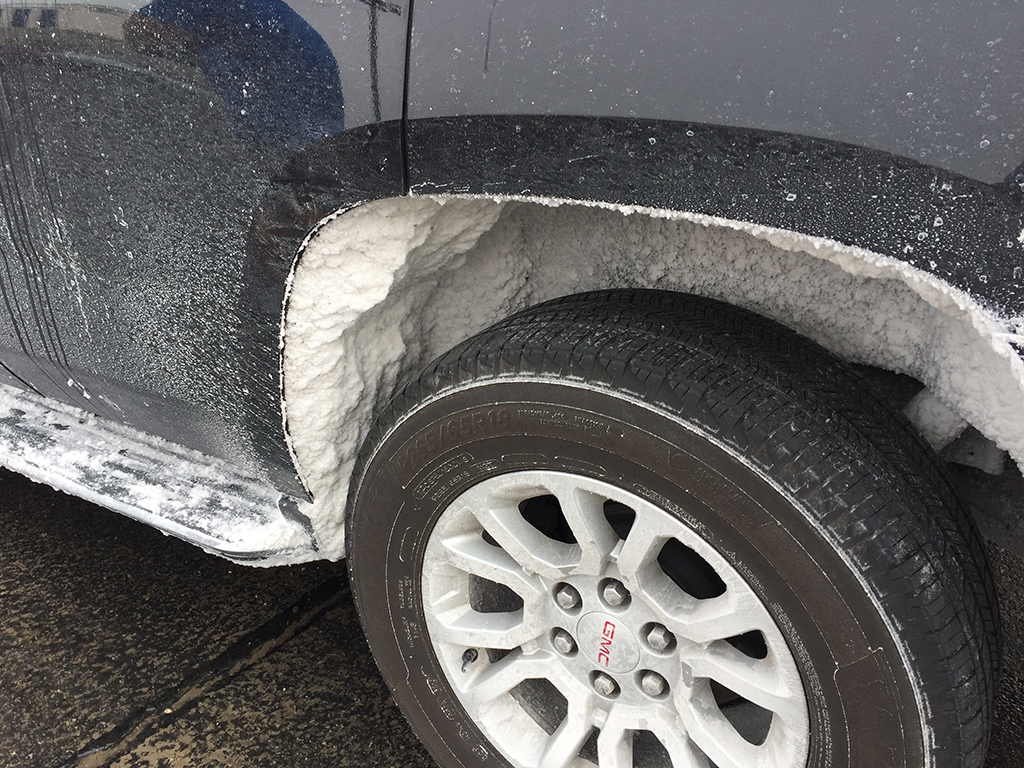 The Salt was very sticky and would collect everywhere under the cars as we drove the miles between the paddock and the staging areas. Every Bonneville Veteran had stories about how the salt ruined their vehicles after they got home if they didn’t immediately wash the salt off their cars. The most interesting piece of advice we heard over and over was to park the car under an oscillating sprinkler for a day to slowly wash off the sticky salt! 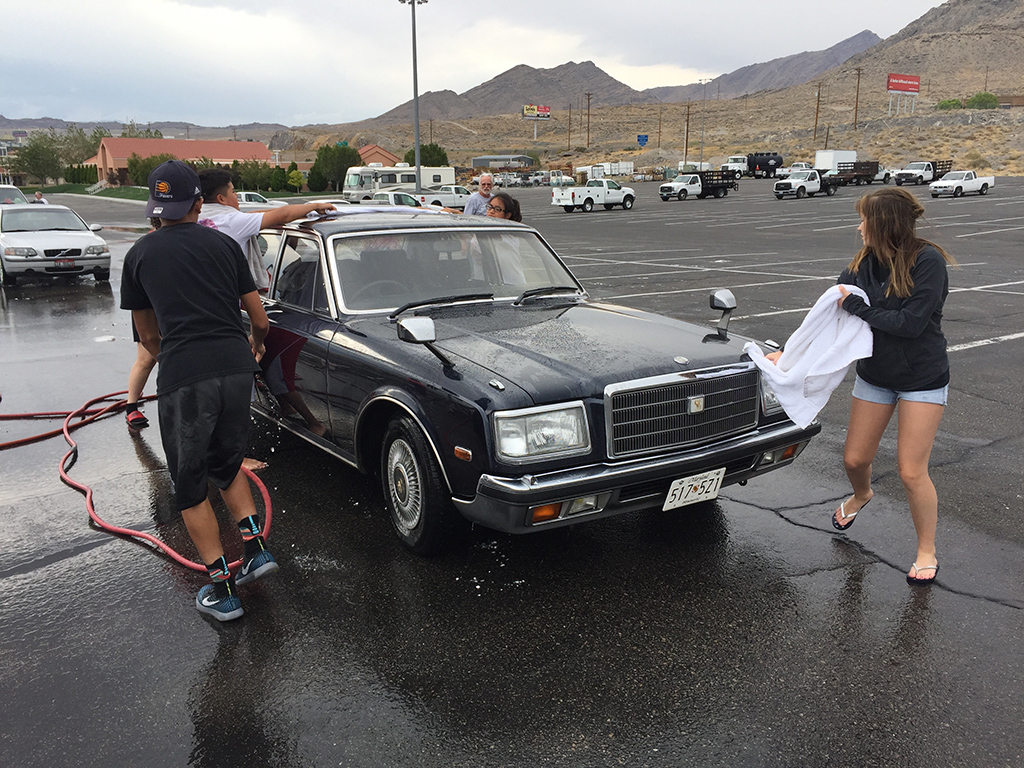 The town of Wendover west of the Salt Flats offered many opportunities to wash the salt off the car. We had the Toyota power washed just outside of Bonneville, and partook in a second wash from the kids at Wendover High-school. We were told the Cheerleaders were offering washes down the street, but our group of high school students said they were better! 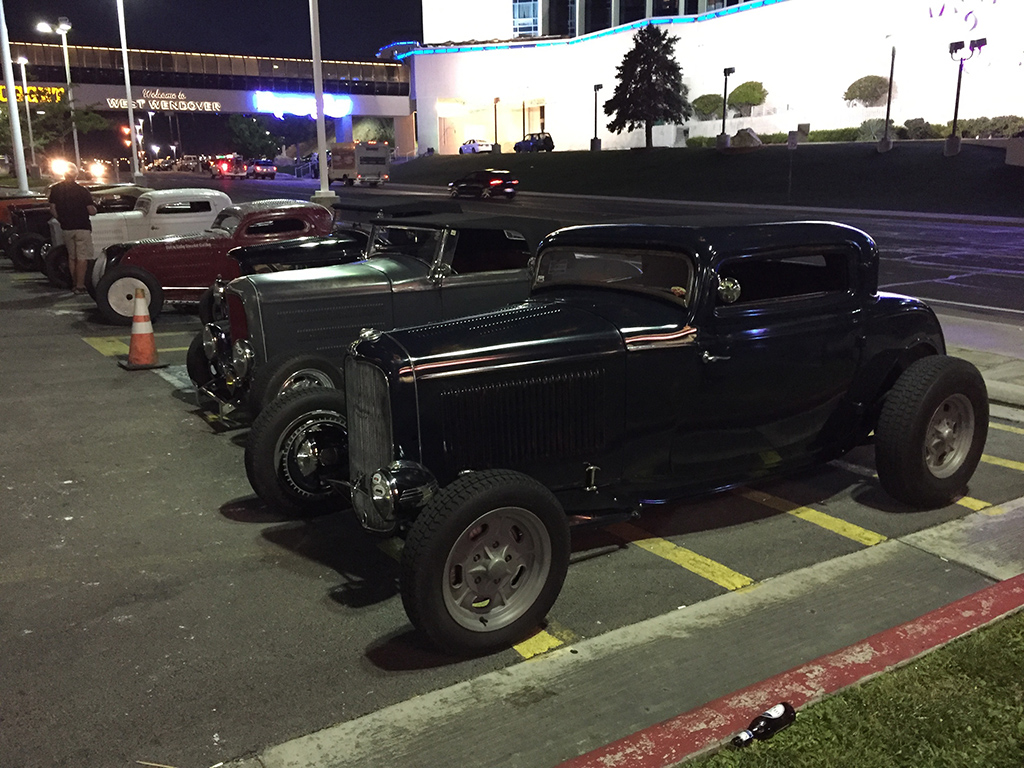 The town of Wendover is a little Nevada town that normally offers the first stop on Interstate 80 outside of Utah to gamble, but for Speedweek, hosts a place to stay for all the racers. 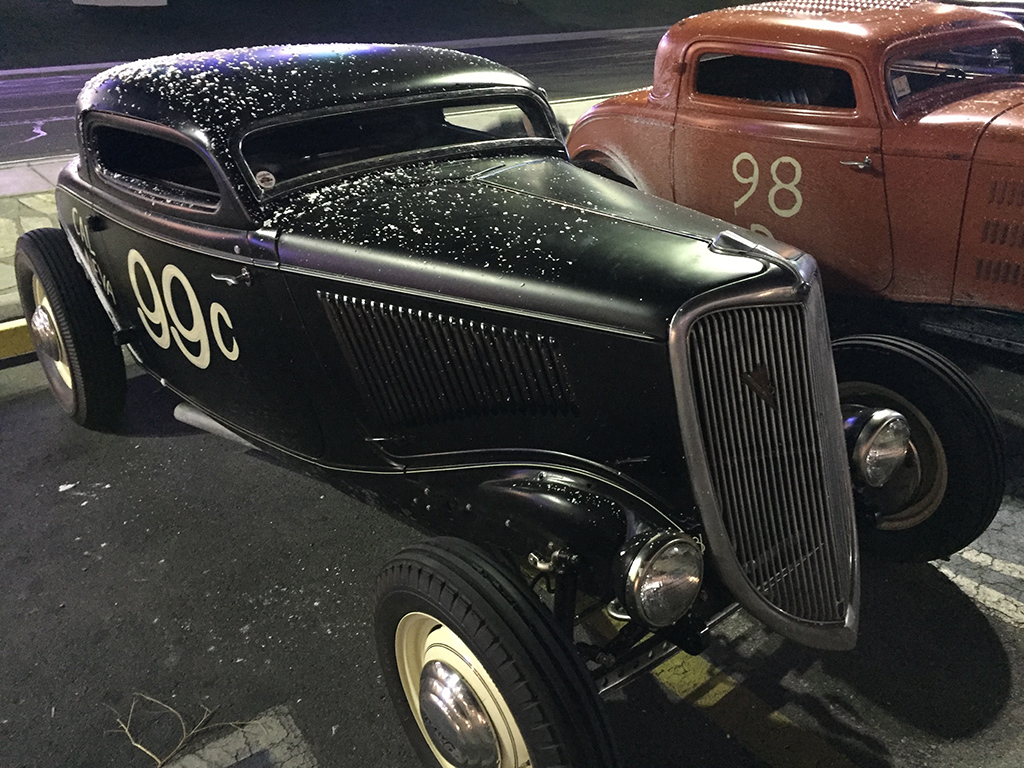 Although we spent Monday night there, we were told Saturday night on the opening night of Speedweek, the town is flooded with racers. We were still able to inspect all the hot rodders that drove out from Southern CA to attend the event. Maybe next time I’ll come out earlier to see the weekend craziness! 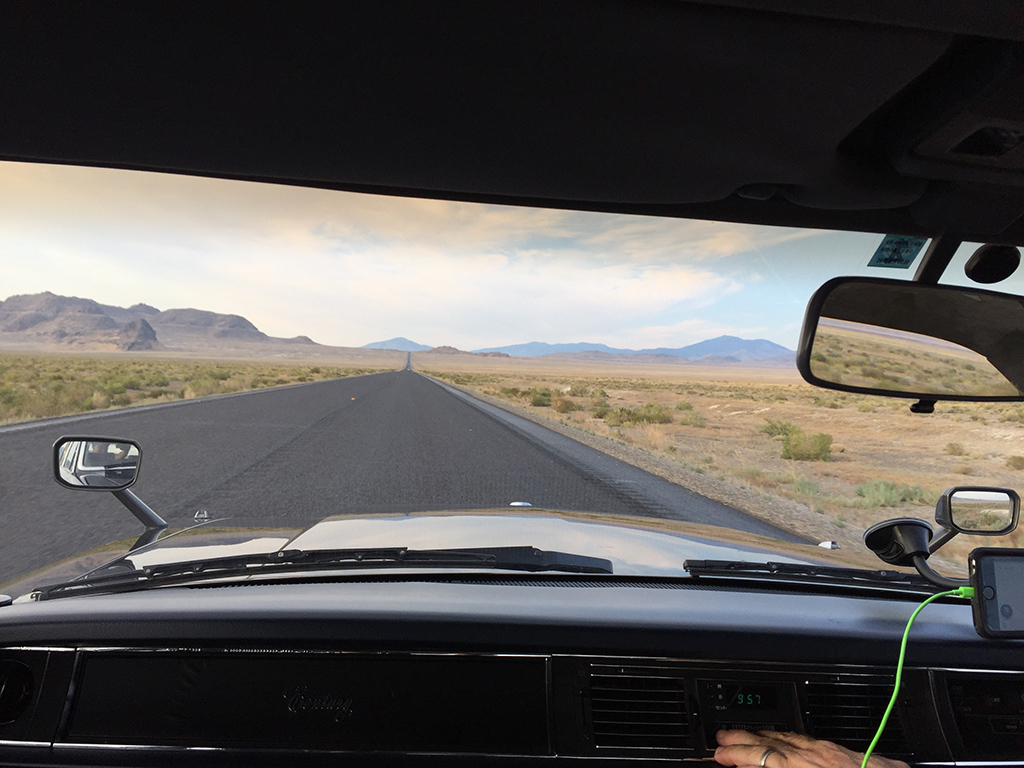 We had another long drive after Bonneville, but it would take us through some great scenery. The car was performing well, but not without it’s small problems. The vibration at high speeds is gone now that we have new tires (duh!), but the leveling system at the rear of the car isn’t working as it should so we’re riding a little low out back. Different combinations of starting the engine, and waiting seems to get the little air compressor working enough to pressurize the system to the correct ride height, but only for about 20 minutes. The fuel pump also seems to be making more noise than we remembered… 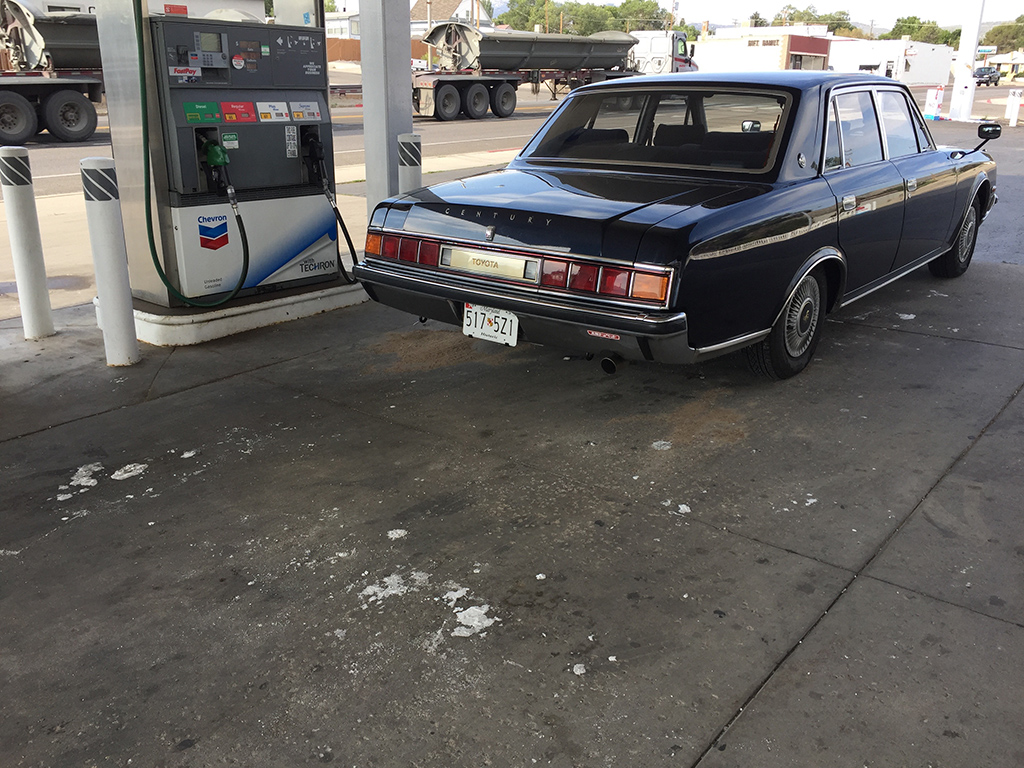 What’s funny is even 200 miles outside of Bonneville, we’re still seeing clumps of salt being left by cars that stopped for gas. We sprayed, washed and physically pulled clumps off the bottom of the Toyota, but I guess other people are not so diligent! 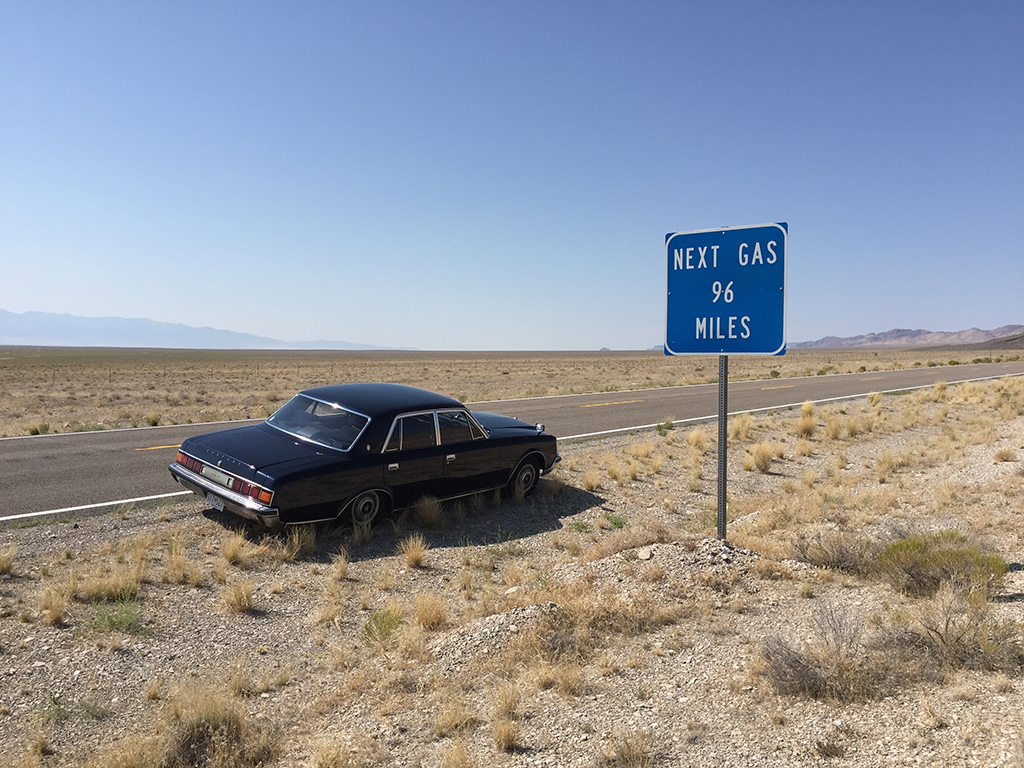 The A/C was still blowing cold, and the car was still performing admirably. Power is down from the altitude, but she was still a joy to drive! 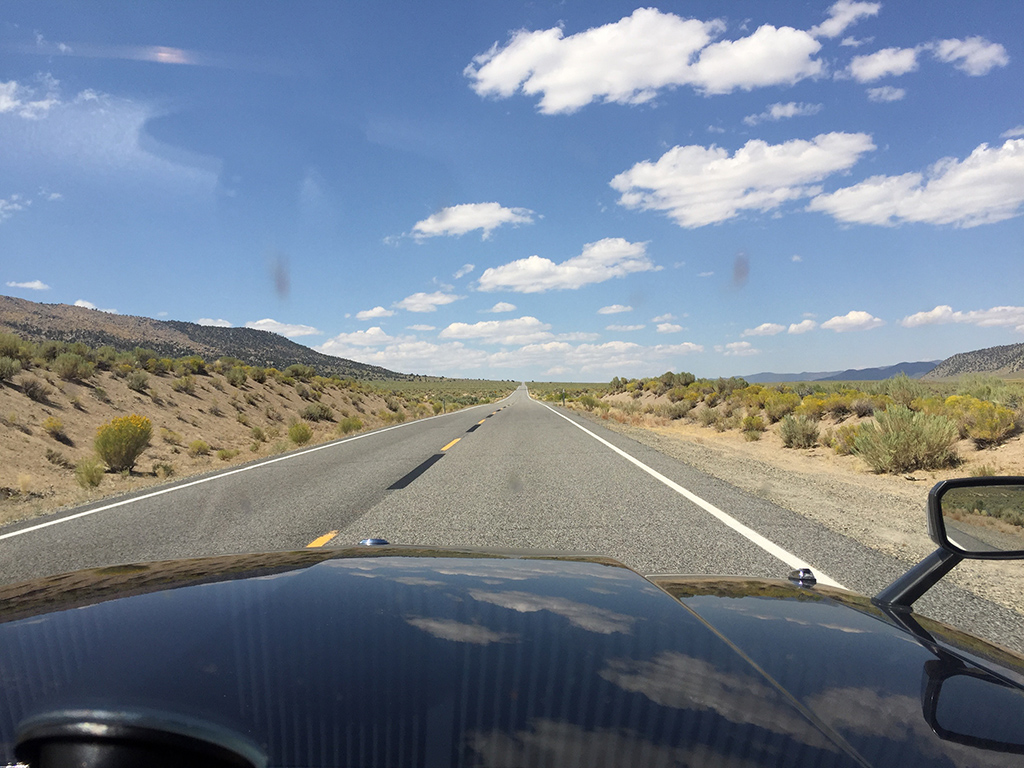 Outside of Ely, we drove on stretches of Highway 50, which is labeled “The Loneliest Road.” Pin straight stretches of desert road framed by distant mountains really lets you appreciate the vast size of America. It might be lonely, but it sure is beautiful! 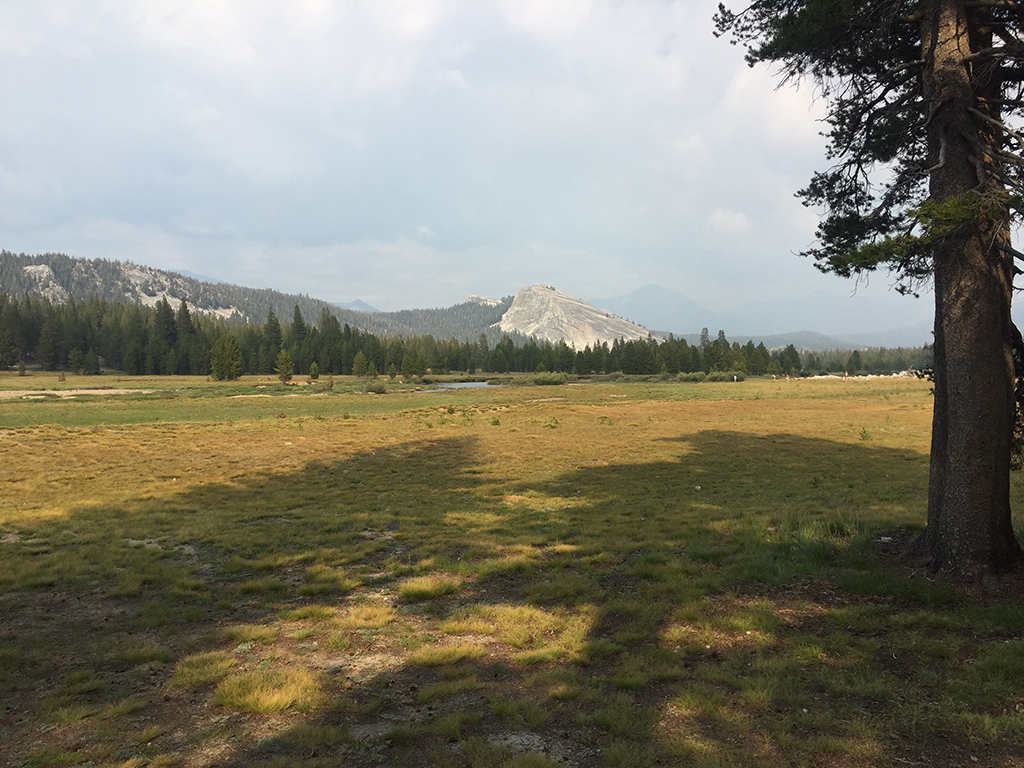 Our destination towards the end of the day was Yosemite National Park. Although we didn’t have much time to take in all this park had to offer, we did manage to scramble up a big granite rock to get a better view. It was my first time seeing the Yosemite Valley, and it gave me great cause to want to return! 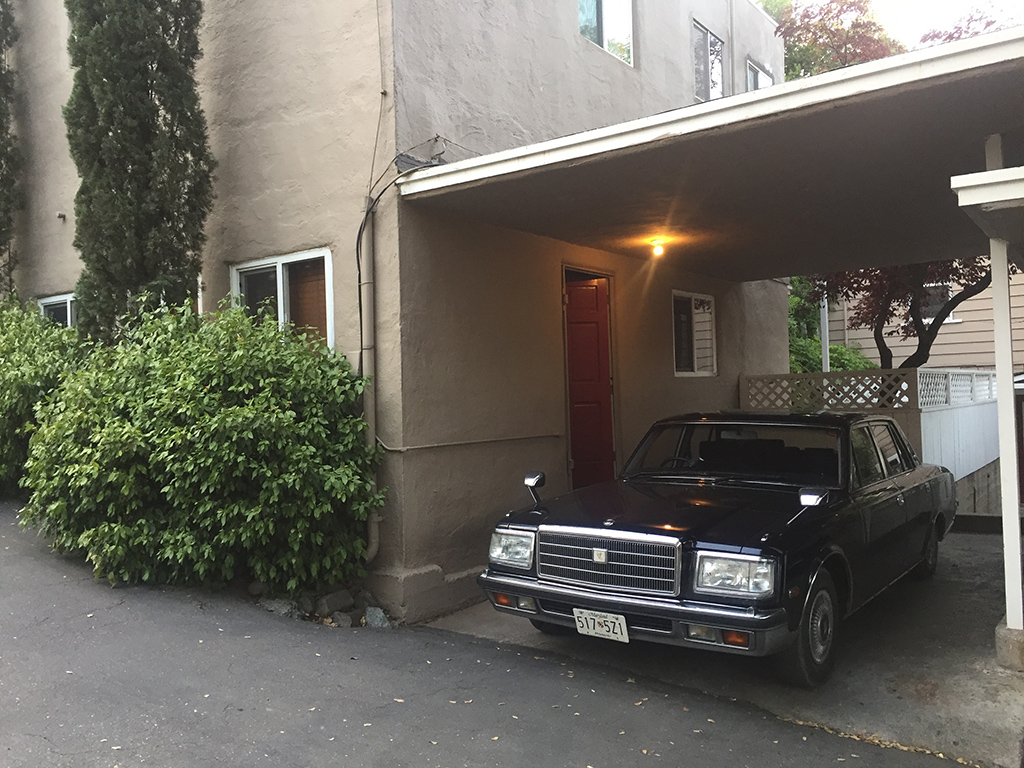 Brad and I managed to snag the last room in Mariposa, CA just outside of Yosemite. It was a cottage behind the motel, but had two rooms and separate beds. Whew! 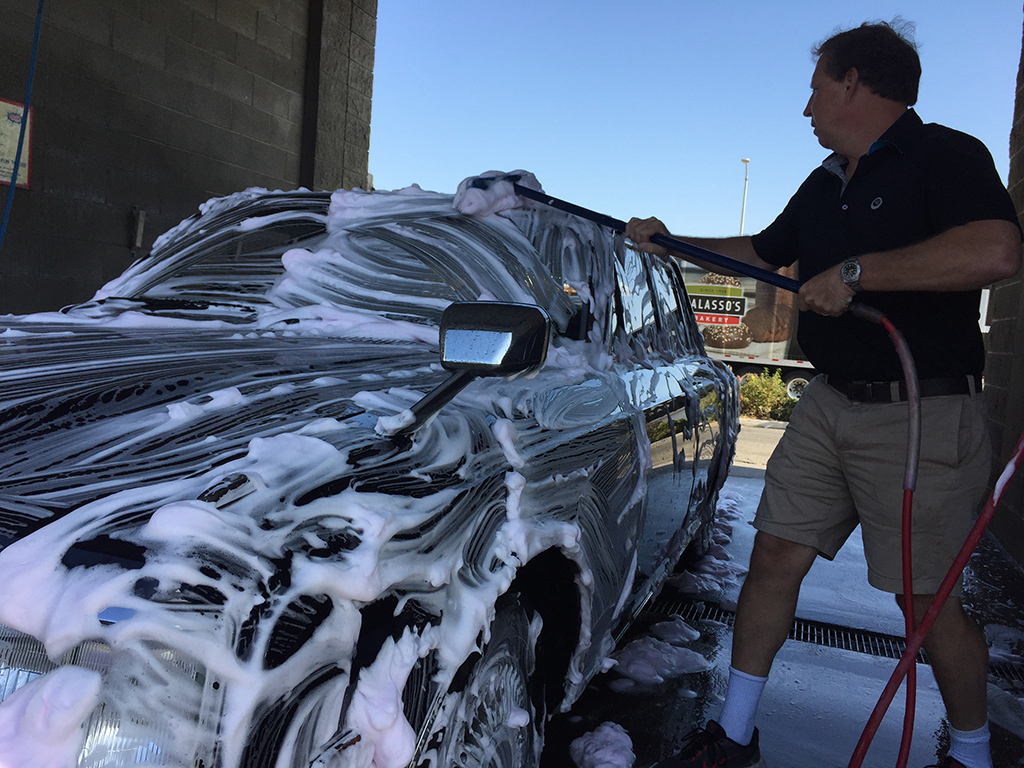 We knew we were back in civilization when we spotted a car wash an hour west the next morning. The third car wash in 36 hours should rid this car of most of the the Bonneville salt! Monterey here we come!