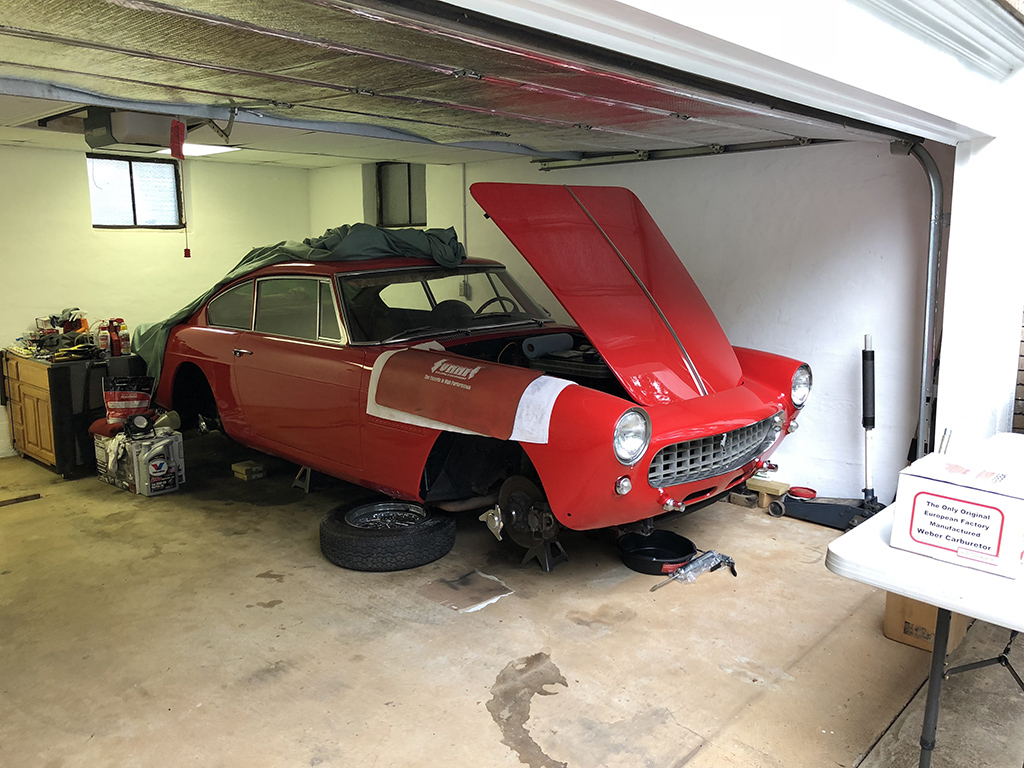 I was asked to go to Lynchburg VA to help an owner of a 1961 250GTE start his car after sitting for several years. This car was purchased in the 60s, and passed on down the family. I think this car, however, had done more mileage being shipped than under its own power in the past couple of decades, but we wanted to change that! 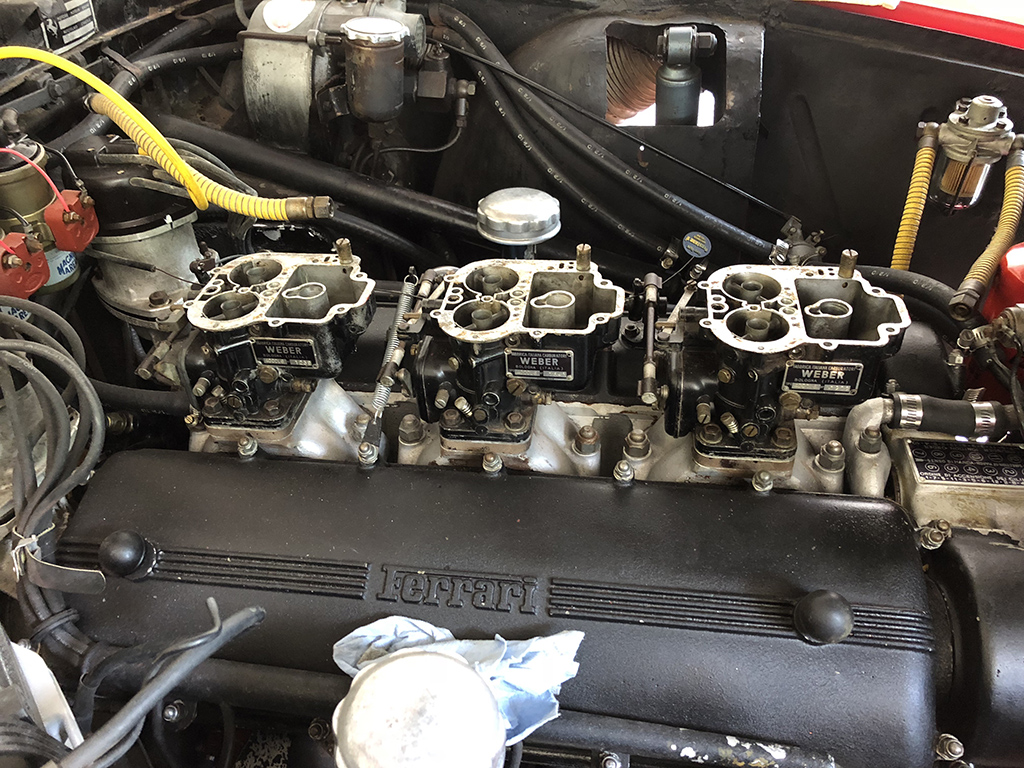 The plan was for me to drive down with a car load of parts and tools necessary to get get this car started. I had John drain the fuel, change the fuel filters, change the oil, and report back if there was anything amiss. I packed two rebuilt fuel pumps, sealing washers, a timing light, and some special tools that I knew they wouldn’t have. 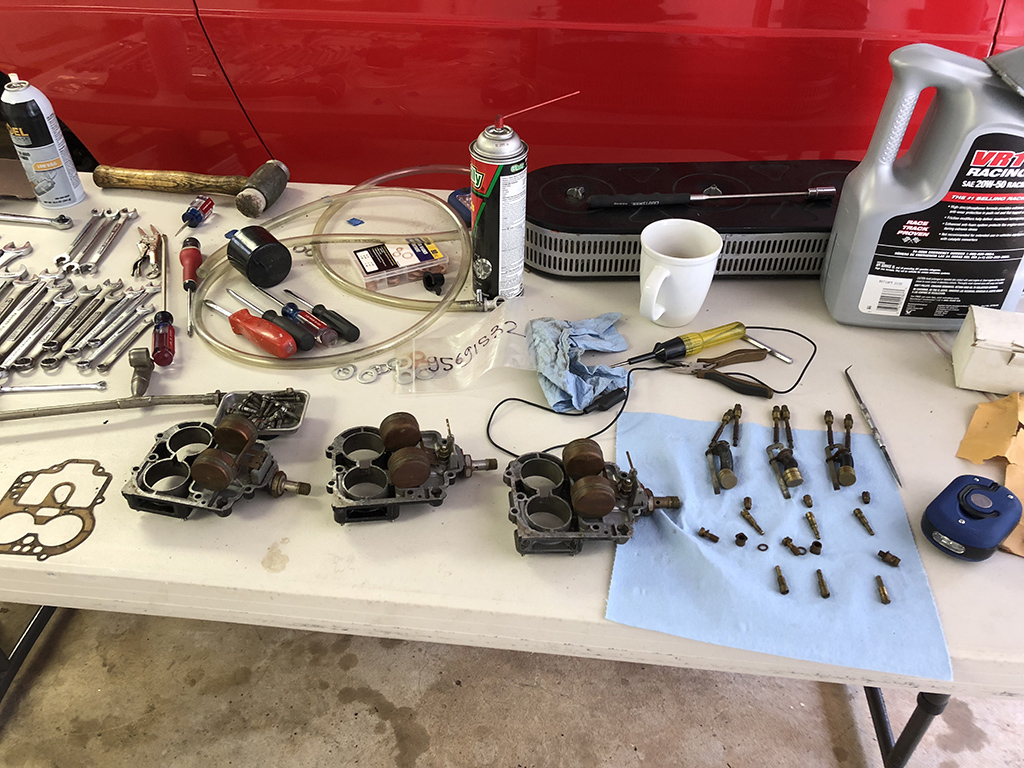 After the fuel pumps were replaced, we turned our attention to the carburetors. Normally, at the shop, we would have pulled each carb, soaked them in cleaner, washed them out thoroughly, and reassembled, but I didn’t have the liberty of time and facilities to do a full service at John’s two car garage, so we did the next best thing which was to remove all the jets, clean them out, and reinstall. I was happy to find them not too dirty, so we might get away with this cursory cleaning. 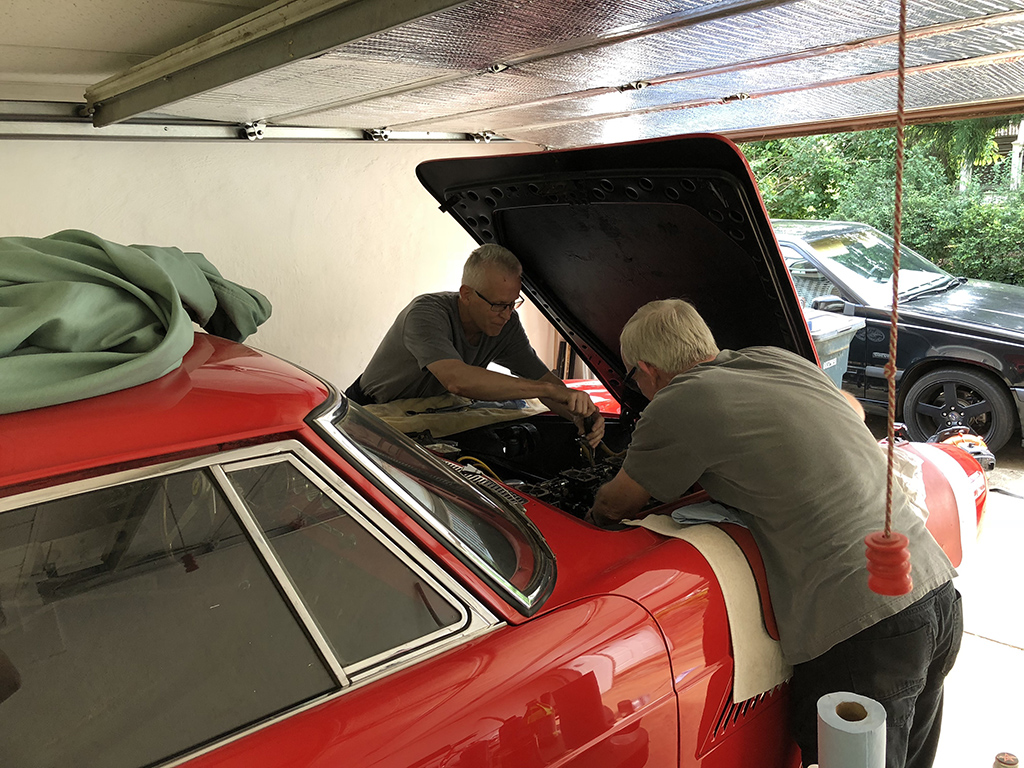 John’s best friend Mike came down for the three days we set aside for the work, and it was nice to have two willing assistants at my disposal to do the grunt work. I could get used to this!

After the fuel pumps were done, the carbs cleaned and reassembled, fuel tank filled, the fuel system pressurized and checked, and the accelerator pumps checked, we were ready to see if the sleeping GTE would awaken… 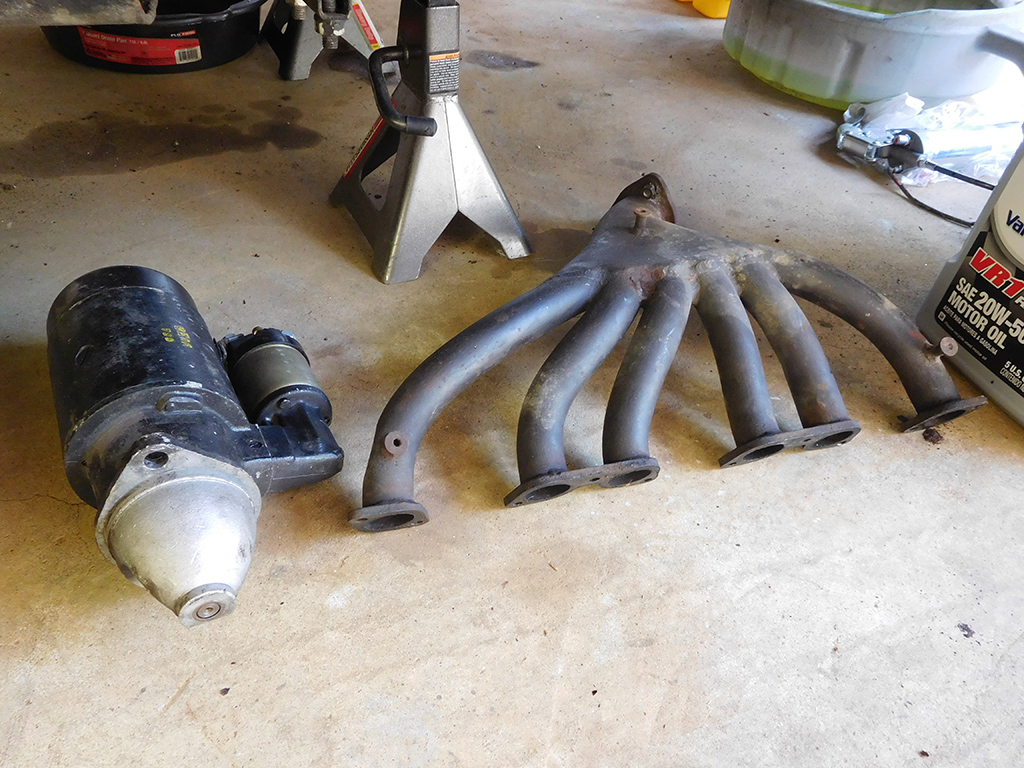 Not so fast! The starter wouldn’t kick over, because the pinion gear would stick to the flywheel. I rocked the engine to release the pinion, and tried again. This time, the pinion wouldn’t release, nor would the starter drive! Before the starter cable melted, I pulled the ground cable off the battery to avert a disaster. There were all sorts of problems with the starter, so we were left with no choice but to pull the headers and remove the starter. I didn’t bring my shaved down 11mm box end wrench because I wasn’t expecting to pull the headers on this car, so I ground down one of John’s wrenches to make his first specialized Ferrari tool for his tool box! Luckily, I didn’t have to make another one for the starter bolt, and managed to make do with what we had.

There were two solutions, send the the starter out for rebuilding, or order a new high torque starter to replace this overweight inefficient Marelli unit. The second choice would be more reliable, and less expensive, so I got on the phone and ordered one posthaste. 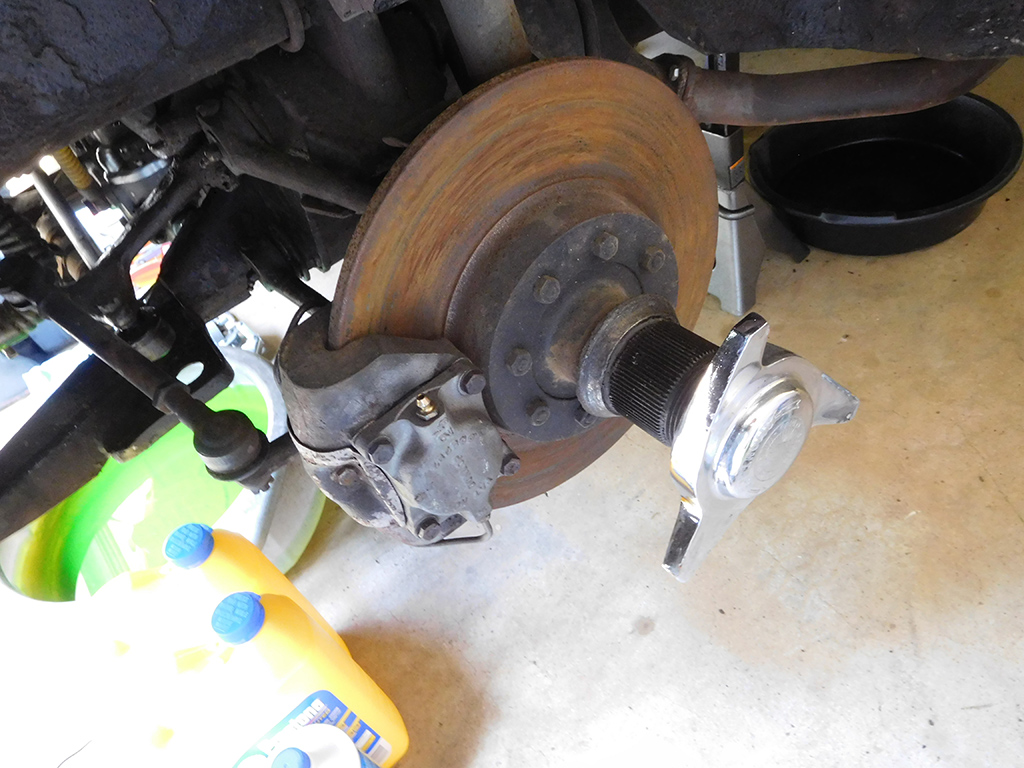 Realizing the prospects of getting this car started during my visit was fading, we turned our attention to the brakes. They were rebuilt many years ago, but again, have been sitting for several years. I decided to see if we could flush some fluid through the system, and see if there was any chance that nothing was seized or leaking. 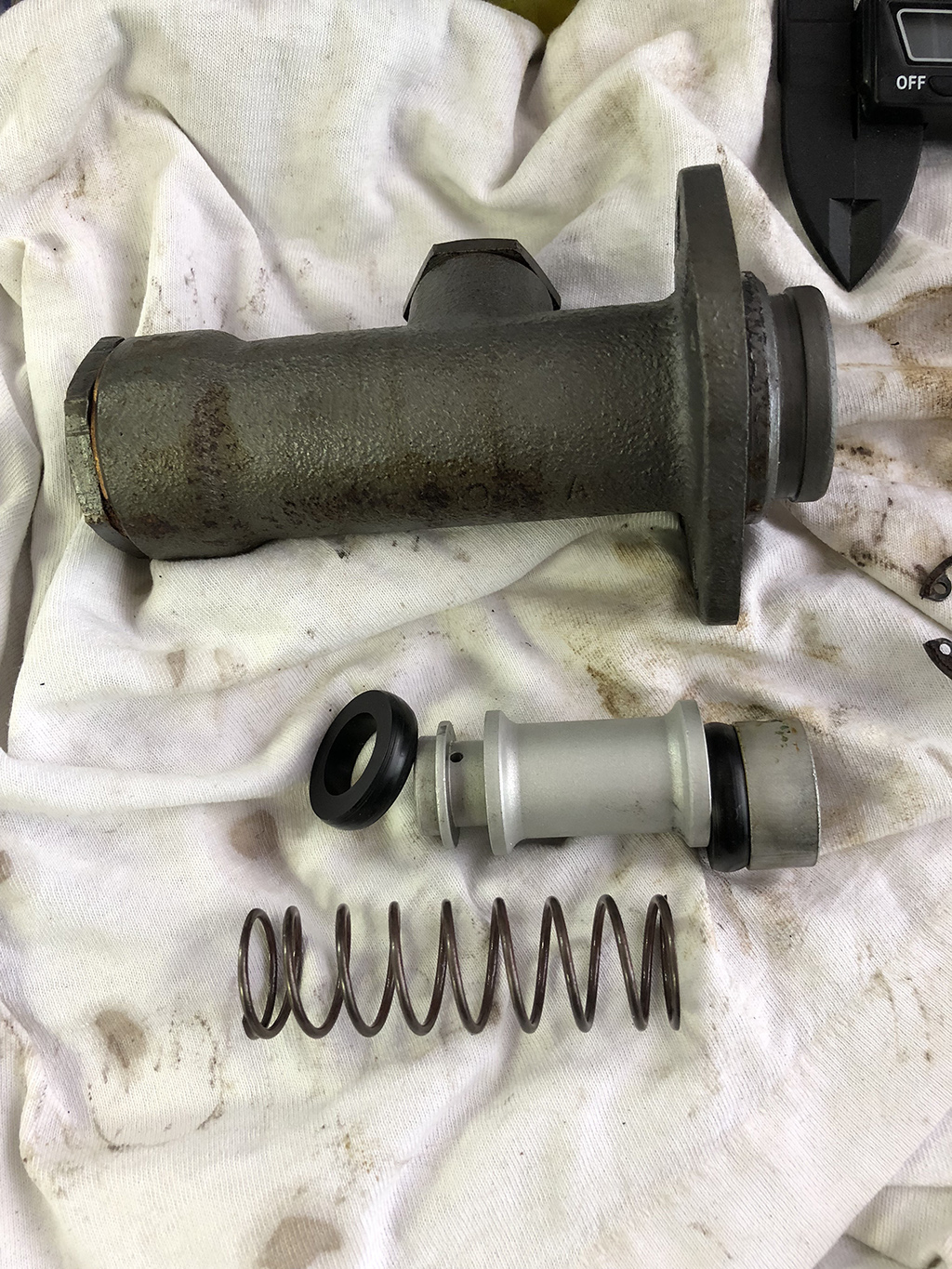 We soon found the brake master cylinder was sticking and not moving any fluid, so after pulling the M/C out, we found the piston was stuck. The good news was the bore looked in pretty good shape, so if we got a new set to seals, this M/C could be put back into service. I made another call to my parts supplier to send us some seals. 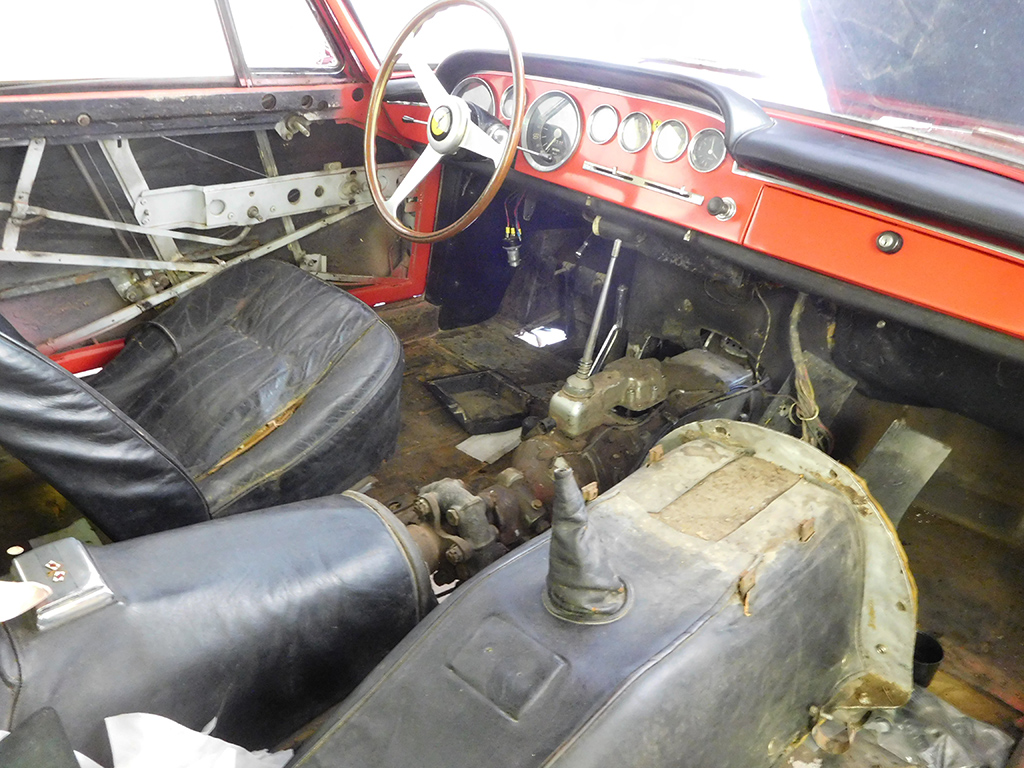 The last thing I wanted to address was the shifter bushing on this car. After all the parts arrive and John gets this car started, he would have found a very sloppy shifter from a worn out shifter bushing. Since the interior was apart on this car, now was the time to replace this bushing. I removed the shifter, and showed him what he was going to need to replace the bushing that was on it’s way along with the brake parts.

I was a little bummed on my drive home from Virginia that we didn’t get the car fired up, but we gave it a gallant try! I don’t know if we would have known the starter was bad unless John had tried to kick over the starter before I arrived, and if it had stuck like it did on me, he may have set the wiring harness on fire! I’m glad I was there to help, and point them in the right direction.