I cannot overstate the impact this first Blog Post had on my life. I would have never imagined the purchase of this Ferrari would put me on a path to many new friends and a new career. Although this entry is very near the beginning, the story actually began back in July 1999 when I bought copy of Hemmings Motor News.

In 1999, the Internet was still growing, and buying cars like old Ferraris was still done by looking at paper printed advertisements. Any car guy could spend hours looking through the hundreds of pages printed car ads in Hemmings and dream of the possibilities. I didn’t buy Hemmings every month, but I did in July, and saw this ad:

I knew the car was rare, but needed to do some more research. I called Gerald Roush, the publisher of the Ferrari Market Letter to see if he had any information on this particular Serial Number. Gerald confirmed this was a legitimate 330 America, but didn’t have any history on the car except that it was imported by Chinetti Motors in 1963.

I called the number in the ad and the owner, Charles Waring, told me he had bought the Ferrari  in the 1976 out of Chicago and shipped it back to Roanoke Virginia. He started disassembling the car and had a local Jaguar mechanic rebuild the engine. In the 20 plus years of ownership, he had the car painted, but now in his 70s, and the car largely still disassembled, he felt he didn’t have the knowledge or the memory on how this car was going to go back together. His ad in Hemmings was to pass the car to someone else to put it back on the road.

I called Francois, whom I became friendly with, and told him what I had found. He invited me up to his shop in Connecticut to look at a blue 250GTE he restored to create an inventory list I would take with me to Virginia so I could account for the parts I would need to put this project car back together. I headed up a couple days later and remember frantically taking notes as he pointed out crucial parts I needed. He would say in his French accent, “Make sure you hav two of those, they no longer make!…Make sure you have that piece. New one will be 1000 dollaire!”

Armed with my list, I made arrangements with the Mr. Waring to drive down to Roanoke from New York. My girlfriend (now my wife) asked to join me for the trip. She never before cared to be involved in any of my car purchases, but maybe this time she wanted to save me from making a big mistake on a disassembled Ferrari!

We left on Friday July 16h, 1999 for the 9 hour trip south to Virginia. The reason I remember the date so clearly is it was the day Robert F. Kennedy crashed his plane near Martha’s Vineyard. Throughout the drive down, we heard reports of his missing plane and the search for survivors.

When we arrived, I inventoried the parts to the car stored in two different locations, and found just about all the parts. I asked if he would consider an offer less than the $30,000 asking price, and Chuck said he had a lot of interest in the car, so his asking price was firm. I was staying in a local motel, and said I would go back and think about it.

I checked into the motel and called Francois to tell him what I found. I explained that I accounted for most all the parts, and the car was in good shape. After considering my report, Francois said, “I think you’re going to hav to buy de car!”

I told Francois, that I couldn’t buy the car without two things and one of them was his help. He had offered to show me how to work on old Ferraris, and I needed to know if his offer still stood with a project like this. The second factor would be if I could use the space at David Letterman’s shop. At the time, I was working for David Letterman as an audio engineer and Dave and I became friendly outside of work with our cars. Dave had offered me some storage space in his warehouse for a couple of my cars, but I would need to ask if he would allow me to restore a car in his warehouse since Francois managed the rest of the collection.

Francois said helping me restore this 330 America was no problem, but I would have to ask Dave for his permission. Dave was a little taken aback when he received a call from me on a weekend, but I soon explained my problem. He asked if Francois was OK with the terms, and he would be OK with my using his space if Francois was OK with it. I felt like I was asking my parents for permission with each one conferring with the other one. With the approval from both men, I call Chuck back and said I would drive back to his house and leave him a deposit for the car. It took me a month to gather up the rest of the funds and return to get my car. 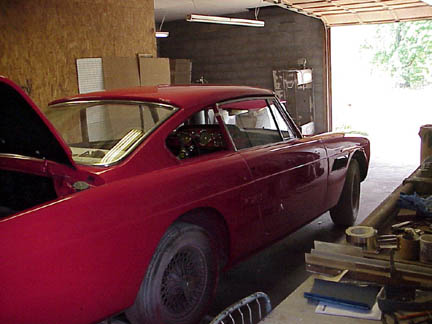 I found this car in Hemming’s Motor News. I called the guy on a Tuesday, traveled down to Virginia on that Saturday, and put a deposit down that same night. Now as usual, I wasn’t planning on buying another car, let alone a Ferrari, but the opportunity presented itself, and you only get chances like this once! It took me about a month to get all the money together, so I could rent a truck and trailer to get the car.

We left on Friday morning, and didn’t arrive in Roanoke until 9:30 pm. It only took us an hour to load the truck with all the loose pieces including the V-12 sitting in the guy’s basement! Luckily he had an access door to his side yard, so we heaved the engine onto a hand truck, and dragged it across his lawn. An engine hoist, and some serious grunting, got the motor onto the truck.

Saturday morning we left for the guy’s body shop where the car, and some other pieces still needed to be loaded. When I say “body shop,” I use that term loosely. The cinder-block shop was in the back of a residential house. Besides being at the top of a hill, the shop did not have an actual driveway. With some fancy truck driving, one of my friends who came down with me, got the truck up to the garage. In an hour, we were on our way back north!

We arrived back at our shop at about 8:00 pm, and began unloading all the parts. After dropping the car off, and the returning the truck, I got back to my apartment in NYC at about 1:00 am. I was exhausted, but it was a “good” tired! 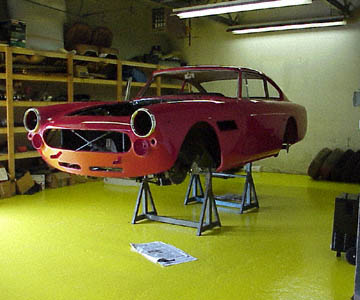 The next morning, I took the hour and a half drive back up to the shop to sort though all the parts. My Ferrari expert, François, went through all the parts, identifying everything. Most all of it was there. The only major piece I’m going to have to look for is the heater box that houses the fan motor. I plan to devote at least one day a week to getting this car back on the road. I will try to make it a budget restoration (if there is such a thing with a Ferrari), and with François’ expert help, I will at least save money and time!