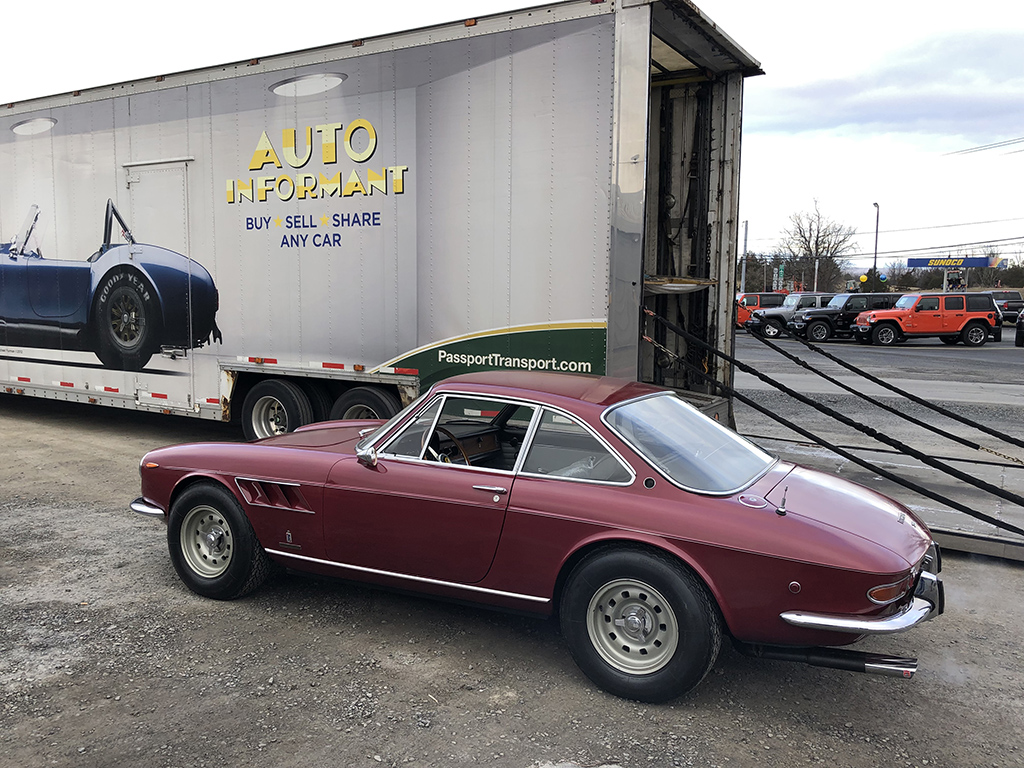 I have a newly purchased Ferrari 330 GTC at my shop that has some older paint that we want to try something different.

It’s what we would call a 10 footer, where the paint is showing its age with some fading, cracking, and is a little dull. The flaws show up more in video. The obvious choice is to send this car in for a new paint job, but I wanted the owner to enjoy this car a little bit before sending it away for a bare metal respray. We had such a transformation of the Daytona I had wrapped a few weeks ago, that I wanted to try it on this car as well. I borrowed a piece of wrap material and laid if over the worst sections of paint, and the wrap material seemed to hide the imperfections fairly well. Since the owner wants to take this car on some drives and rallies, wrapping this car would be a good way to improve the looks, and if it gets damaged during these drives, the car  would be getting new paint anyway. We could enjoy the car for a year or so, and then send it in for paint later. 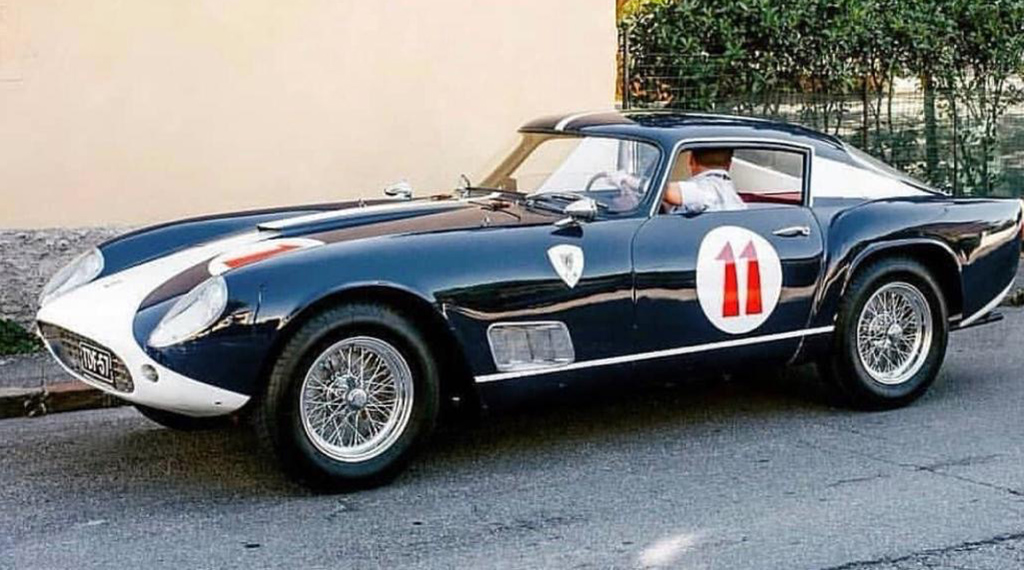 The owner started thinking that it could be fun to try some graphics on the car since the wrap would be temporary. He sent me these photos of what he had in mind. 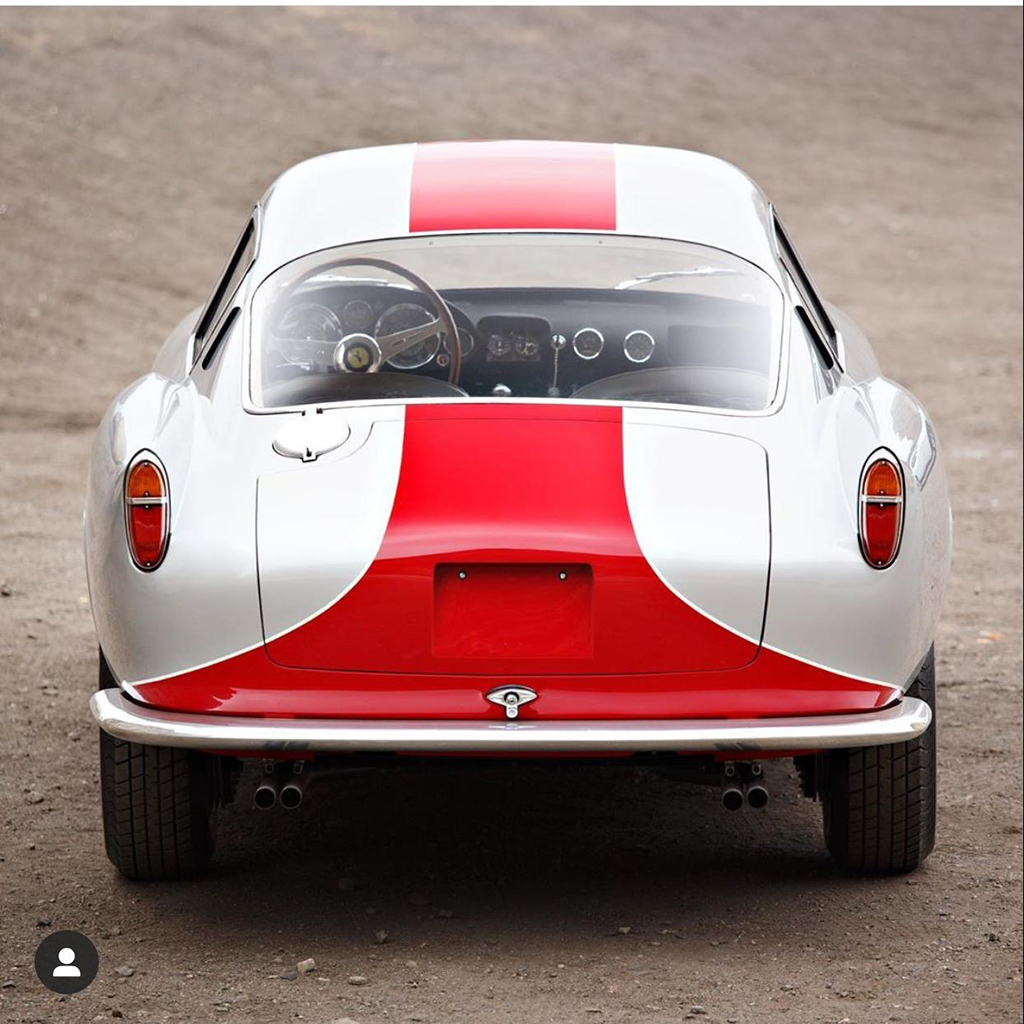 The body shapes were different on these Ferraris, so transferring the stripes would take some layout to see how it looked on the GTC. 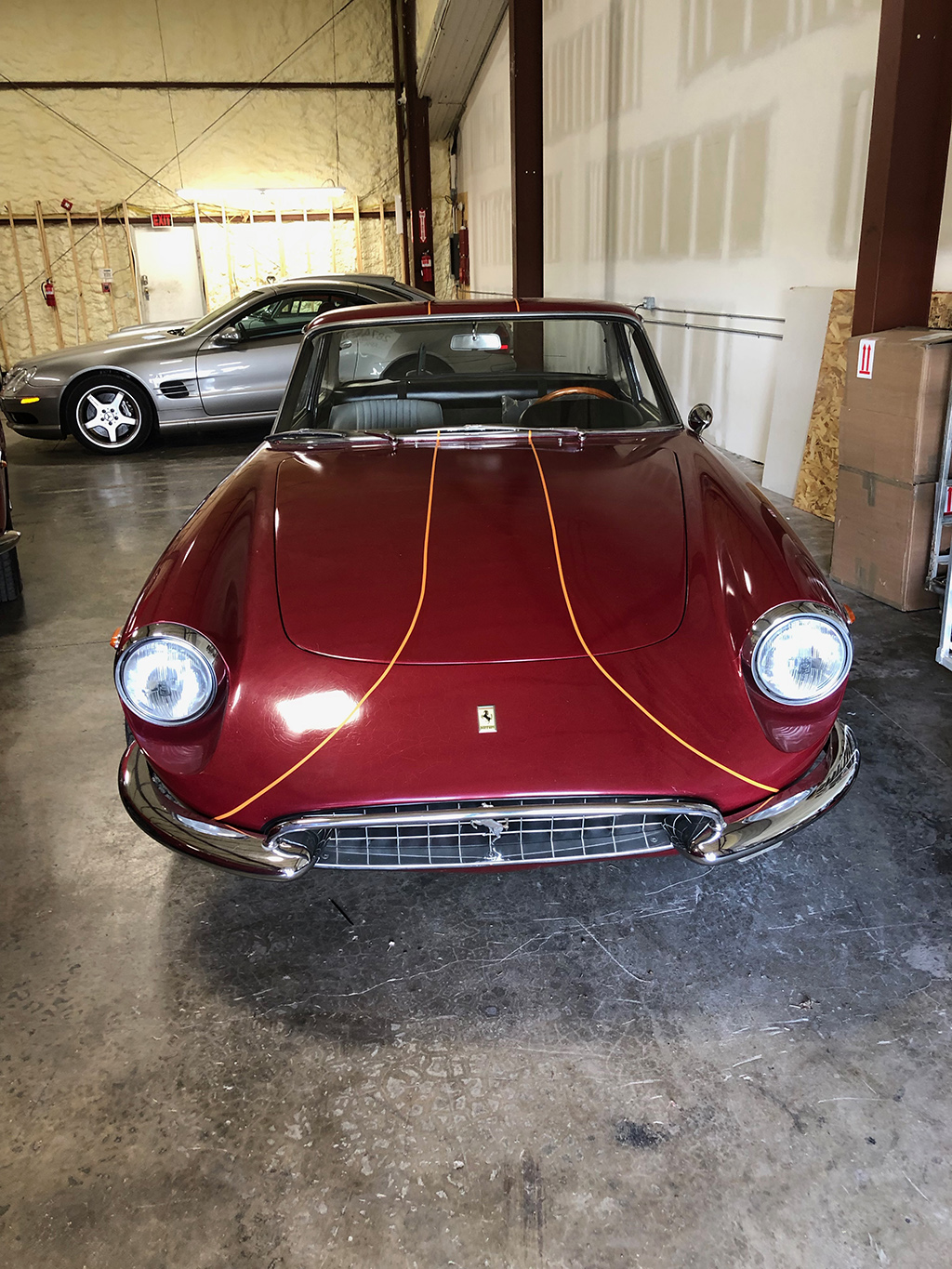 I got some thin vinyl take and began laying out the lines. Here’s the rough shape I came up with on the nose. 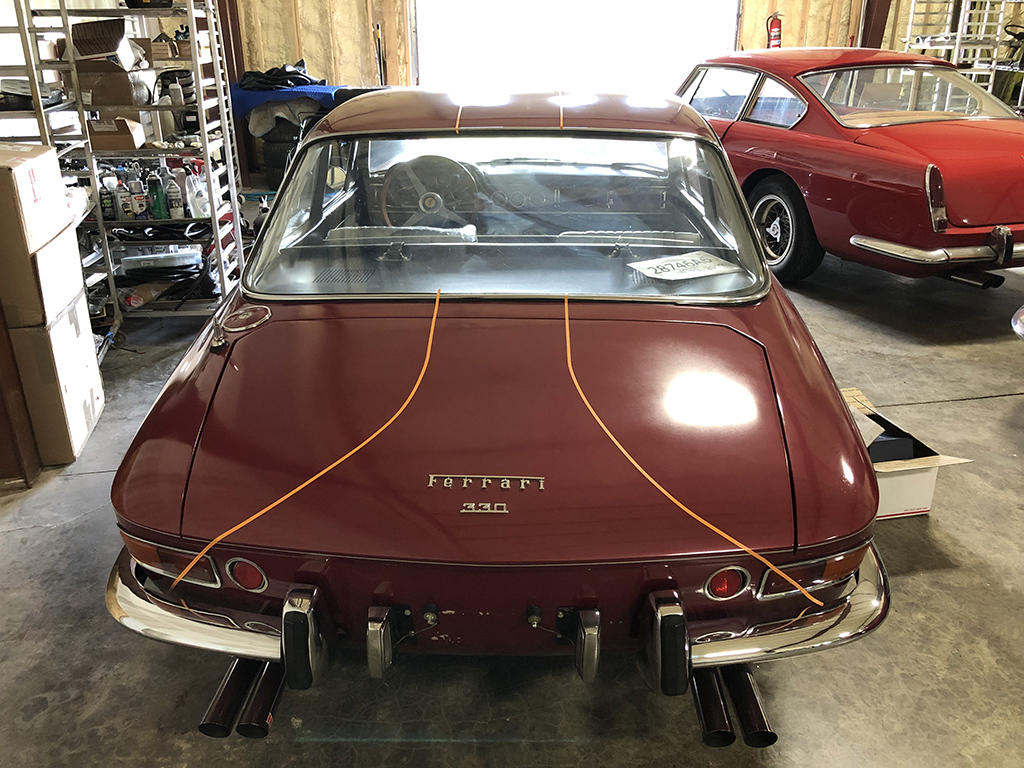 I tried the curve on the rear deck of the GTC, but the owner and I felt it didn’t look as good as it did on the TdF. The GTC rear deck was too flat, and the rear is pretty busy with the lights, bumpers, and bumperettes. The curve seemed to only make it busier.

Trailing the stripe straight down seemed too safe, but worked better for this car. Now the owner gets to pick colors! 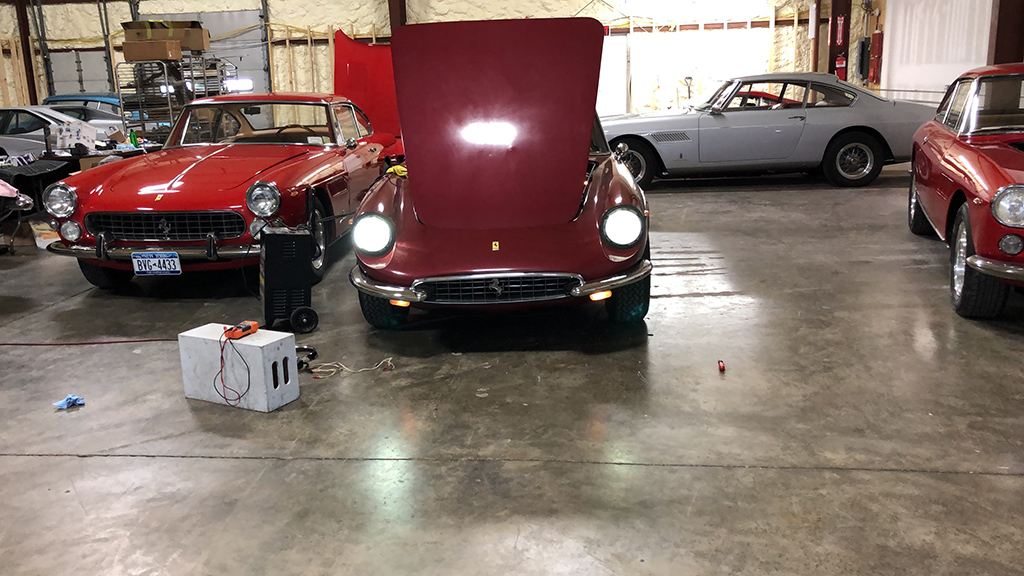 I’m upgrading this car with brighter headlights and I wanted to try out LED headlights. I bought a set of lights that fit directly in the 9 inch seal beam headlight holders. Not only are they brighter, but they will also draw a lot less power. 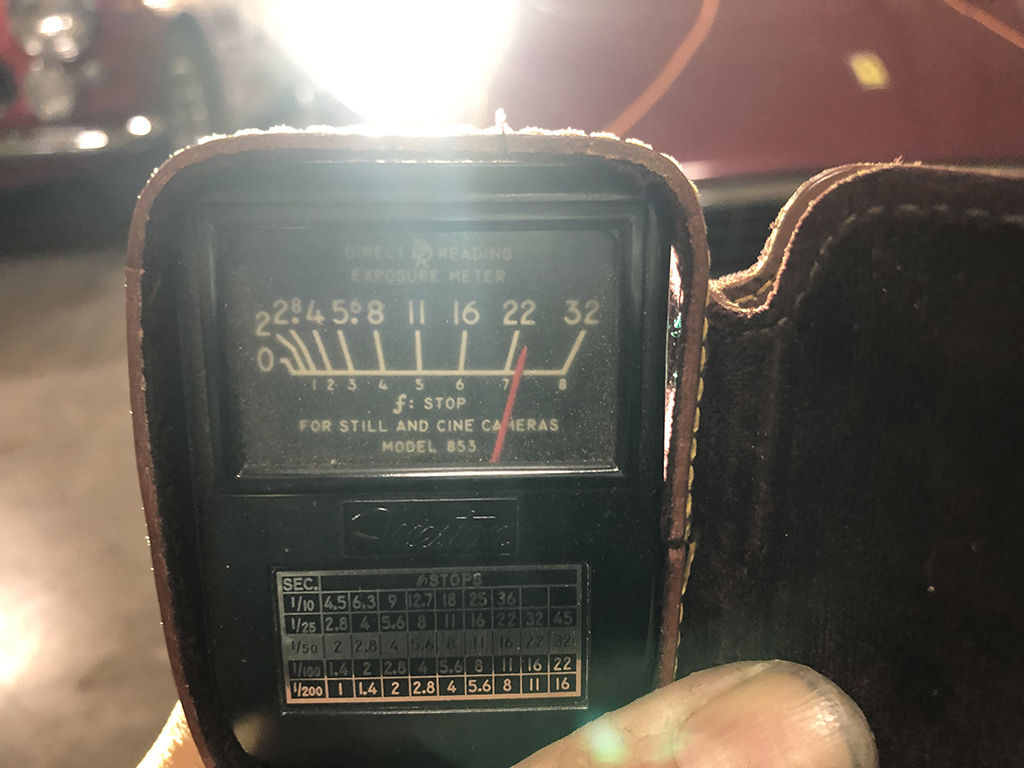 When I was installing the lights, I did notice one side was less bright than the other side. I dug out an old light meter to confirm my suspicions. At first I thought it was the bulbs, but after swapping out a set and switching the lights from side to side, I checked the voltage between the two lights. With the car off, and the headlights on, there was a 0.8 volt difference between left and right lights, but when the engine was running, the added voltage from the alternator dropped this difference. The LED lights were very sensitive to this voltage difference below 12 volts, when the car was not running. 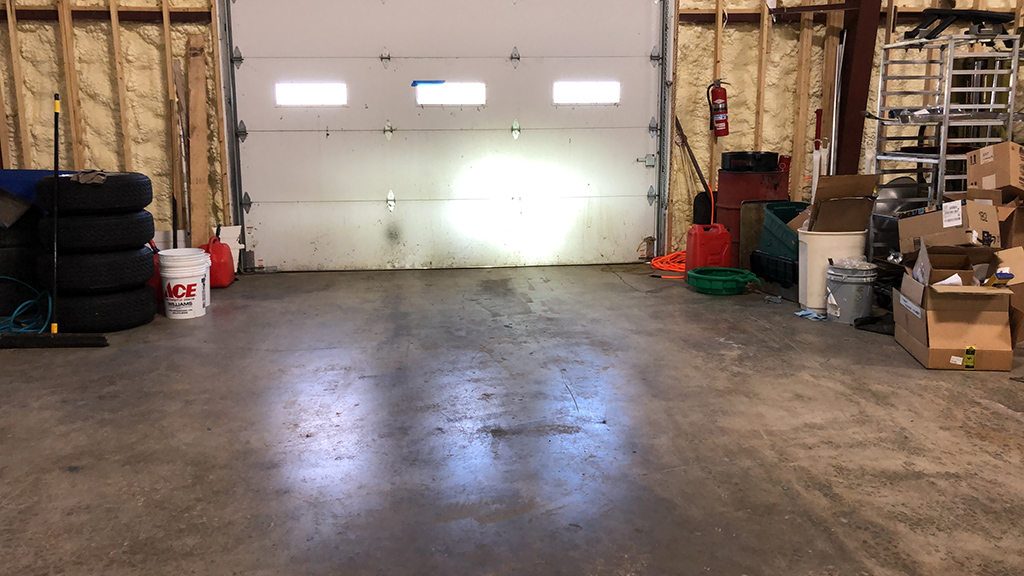 To make everything work as it should, I will have to look into the wiring of the headlights. This kind of voltage drop between headlights is usually from a bad connection or union in the wiring harness. Corrosion or a bad connector rarely fixes itself, and will only get worse if it’s left alone. We’ll see!