Trying to Send a Car Home 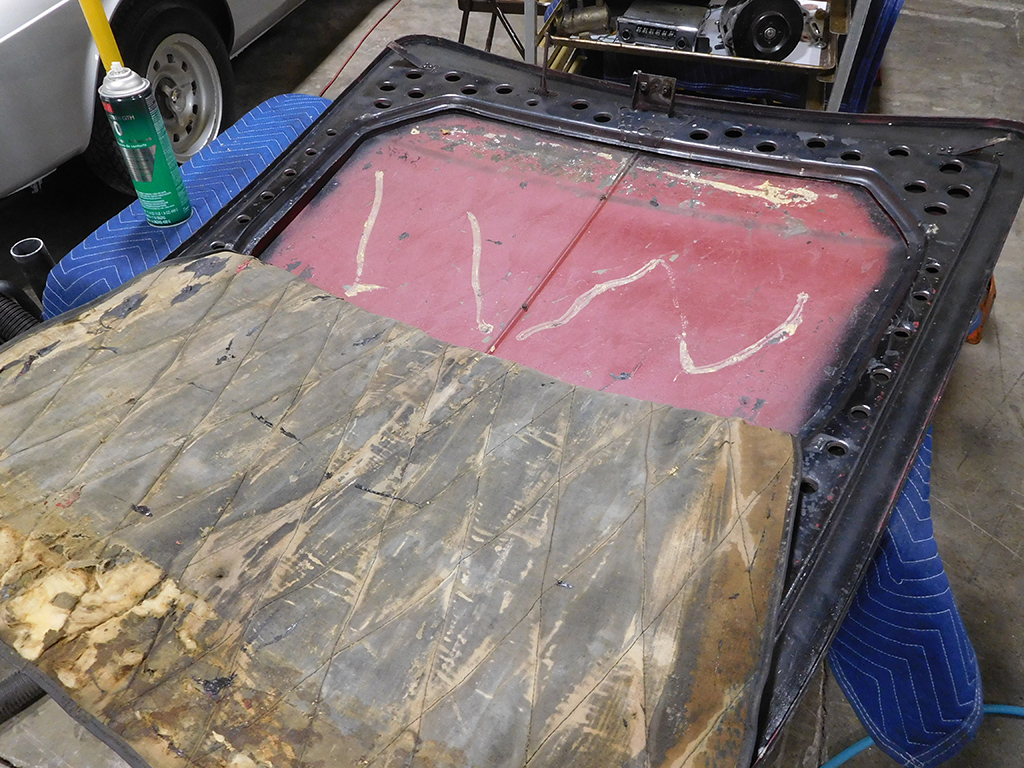 I had to remove the hood to pull the radiator out of the black GTE I’ve been working on, so now was the time to re-glue the hood pad. Someone used construction adhesive or some kind of hard glue to secure the old hood pad, but it wasn’t doing the job. Contact adhesive usually works, but I had to scrape and clean the underside of the hood first. 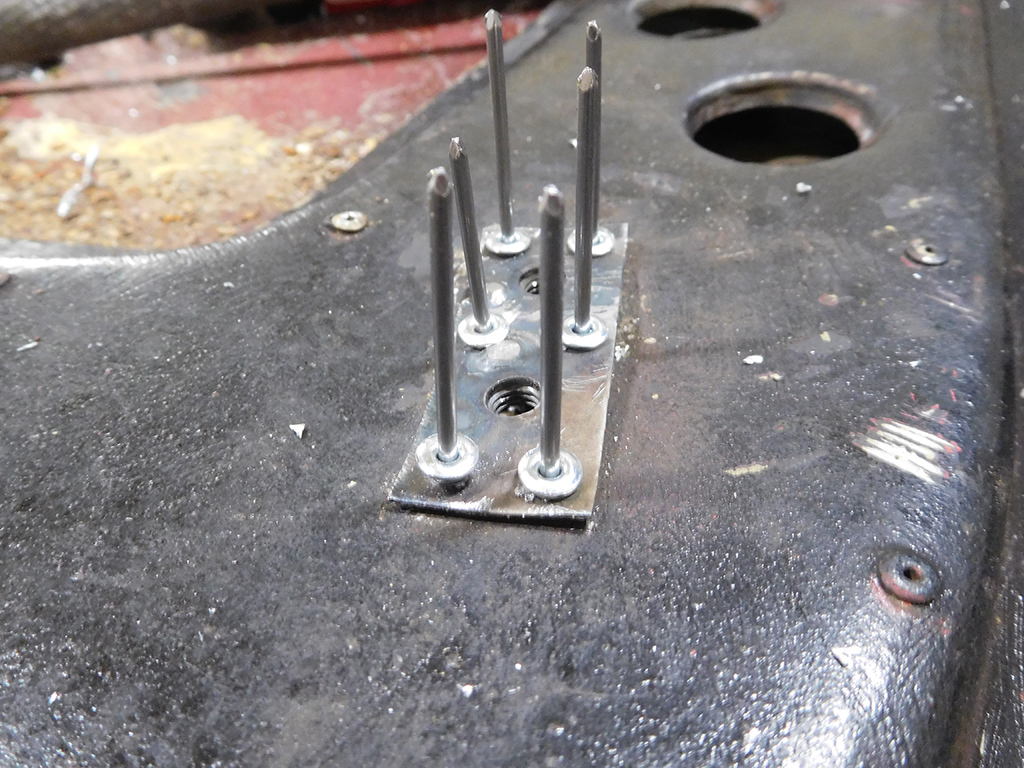 Another problem I found on this hood was the capture nuts for the spring tension bracket had broken loose. This was not an easy repair for so many reasons. The hood on this car is made of aluminum along with the substructure. Cutting this area open to remove the nuts would require welding to finish the job. The heat from this repair could damage the paint on the other side. This car will eventually go in for a complete restoration, but for now the owner wants to drive it a little. The problem I had was how was I going to repair this issue so I could attach the spring tension without welding? My solution was to weld two nuts to a thin steel plate. I could pop rivet it to the aluminum substructure where it would be strong enough to hold the bracket.

With the bracket installed, the repair would be hardly noticeable. We’ll fix this the better way when the car is restored. 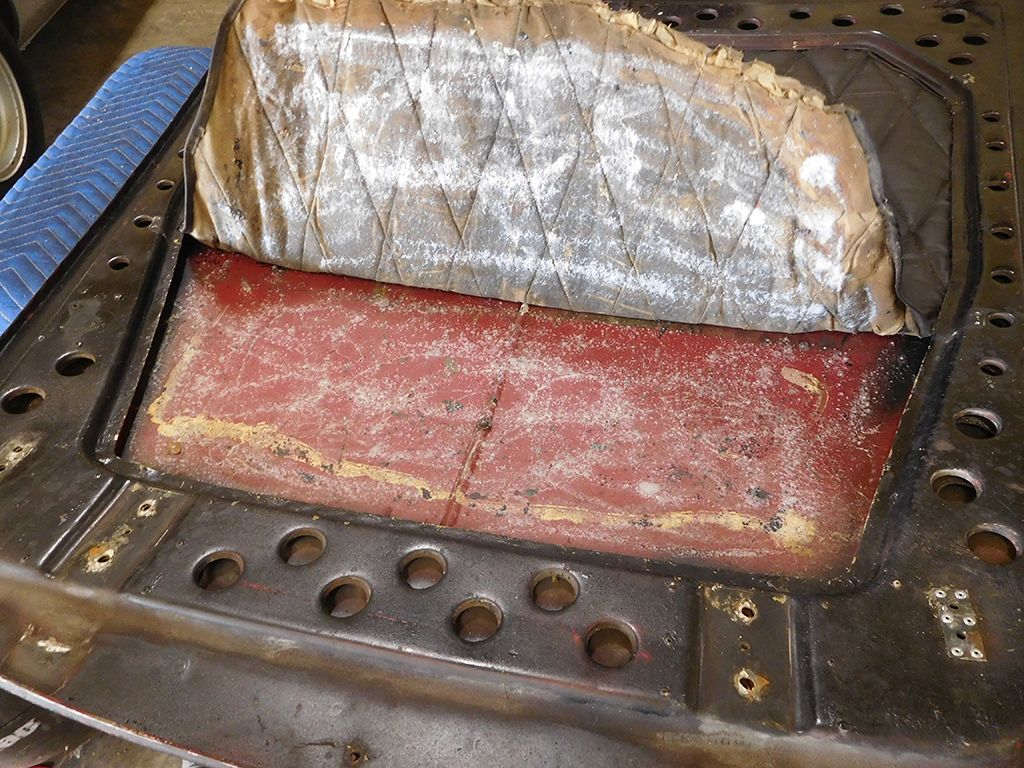 With the hood cleaned up, I re-glued the hood pad and got ready to put the hood back on the car. 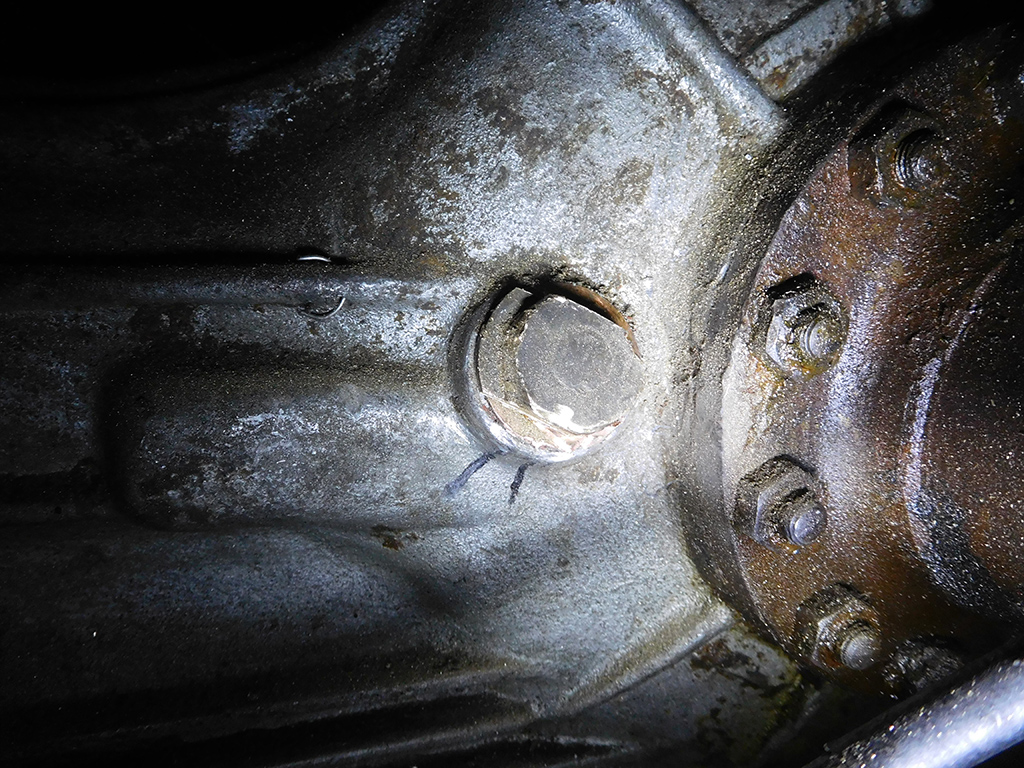 I noticed the end plates on the differential was leaking oil, and it made me want to check the rear diff oil. Considering the overdrive on this car was trashed by running it without oil, I didn’t want to see the same thing happen with the differential, but there was a problem. The fill plug was were rounded off! What started out as a simple oil level checked turned into a real dilemma. If I left well enough alone, I would never know how much gear oil was in the diff, but to get the plug off, I would have to destroy the plug. The brass plug was too shallow to get any purchase by another socket or wrench, so I would I had to cut into the plug to make room for a pipe wrench to grab hold of the head. This job turned into a real bear! 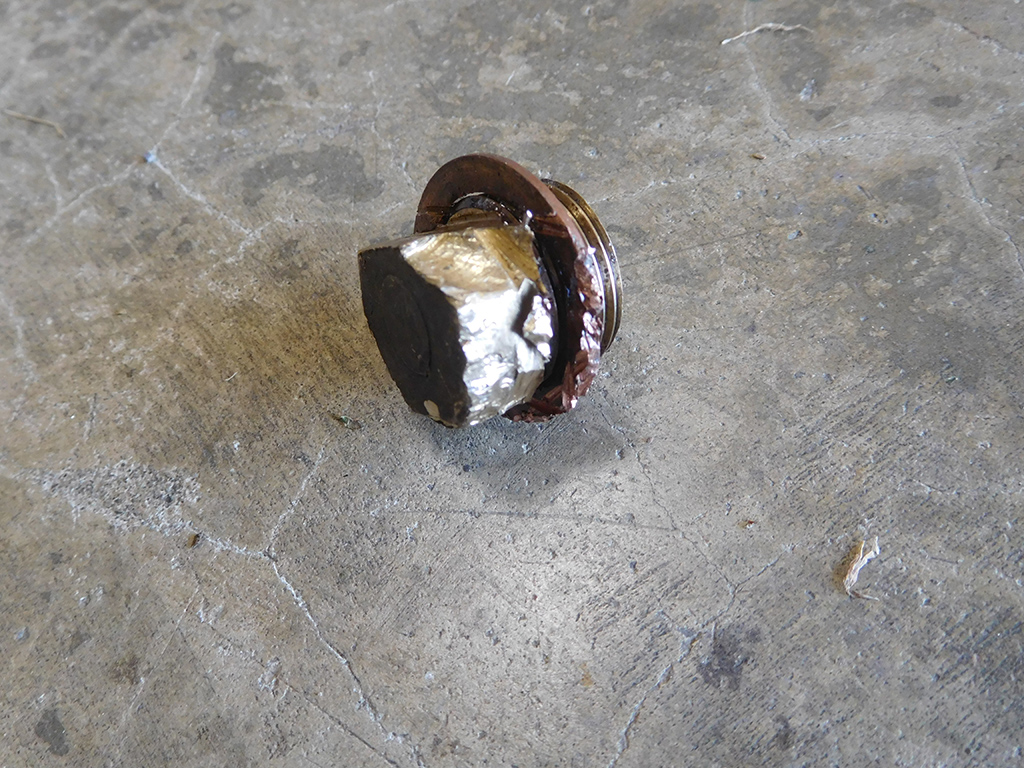 What would normally take two minutes to check the level of the differential, took hours to cut and remove the plug, not to mention order a new plug to replace the one I cut to get off the car! 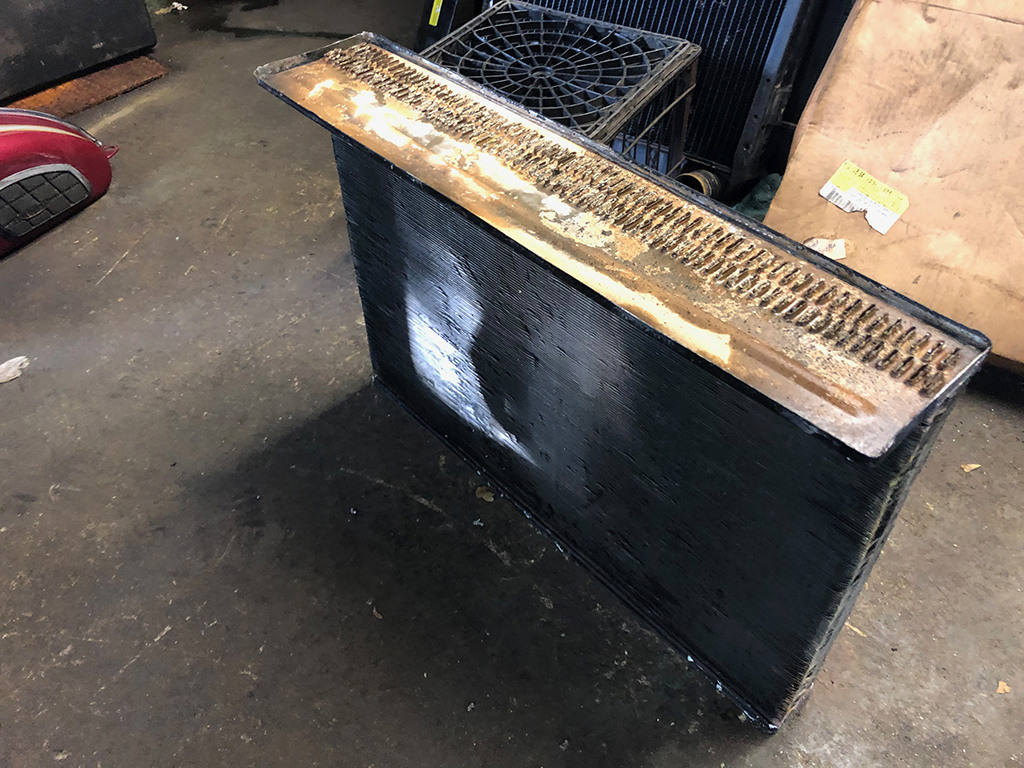 I went down to the radiator shop to pick up the newly refurbished radiator. Here’s the old core. 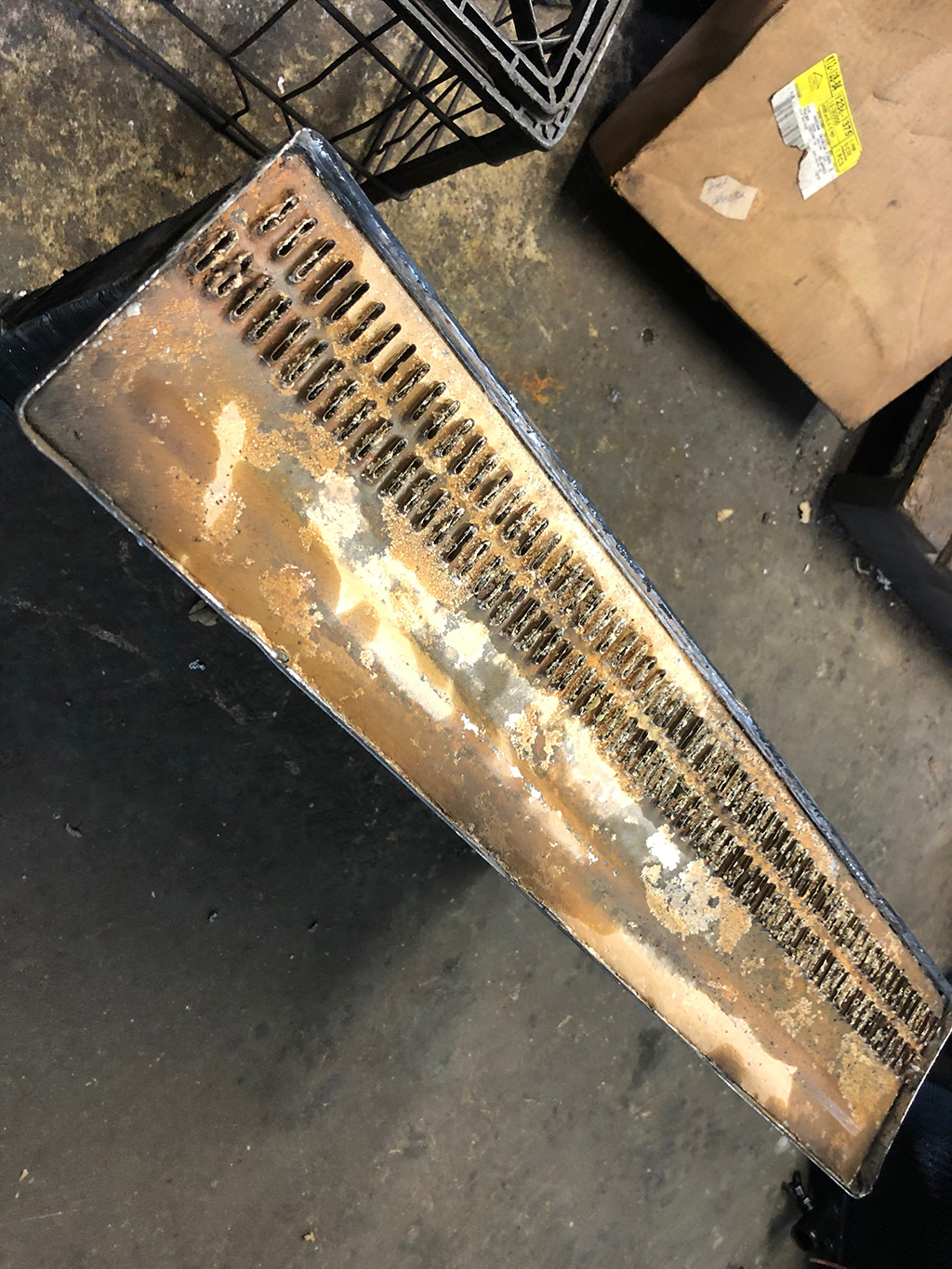 Not only was it leaking, but it also had some calcification. I’m glad we went with a new core. 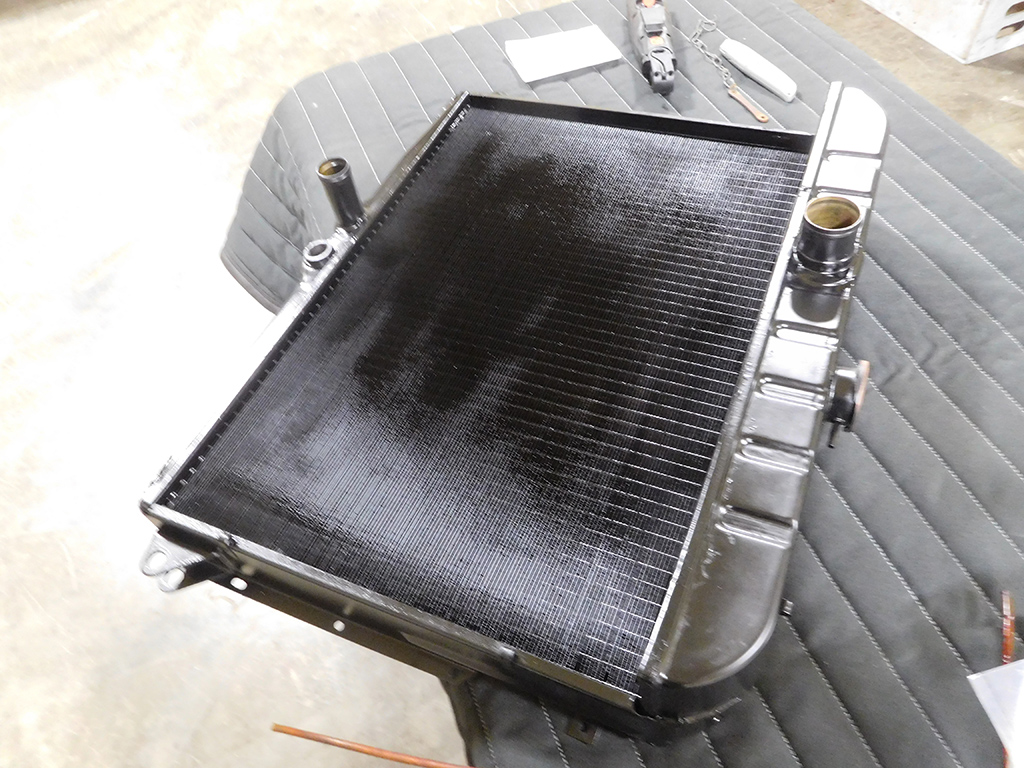 The new radiator was painted and ready to go back in the car. 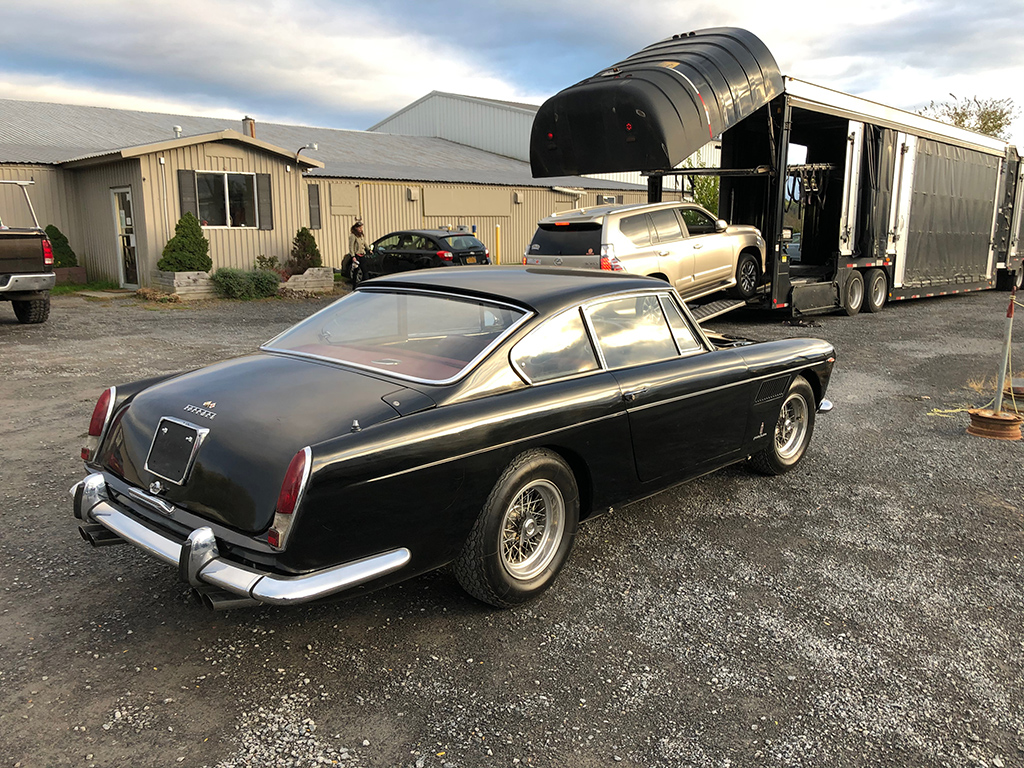 This car was on a short deadline, and I hustled to get it done. It was nice to see if go so I could get back to the other cars I have at the shop!