GTE Back in the Queue 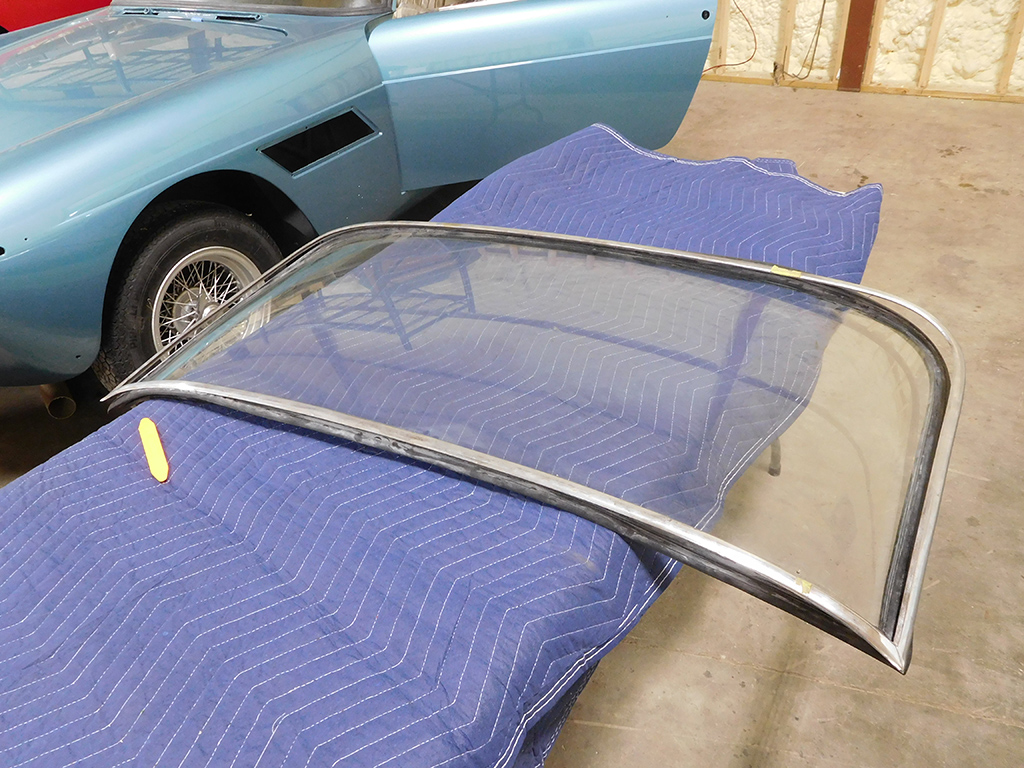 I have a nice 250GTE at the shop that has been waiting for my attention. I often struggle with prioritizing long term and short term projects. Projects stall for a number of reasons, and this one was scheduled back in the queue! This car was at two previous shops that partially disassembled the car and painted it. The owner decided to send it to me to finish but it missing some parts and needing a lot of attention. Having been moved several times, parts were damaged and misplaced, and I have to admit, the prospect of finding the missing parts was not something I was looking forward to, especially when it would only add to the cost of this restoration. Whatever the case, this car was not going to go back together by itself, and with the approval of the owner, I started back into it. One of the first jobs was to check the windshield frame to the car. With the moves, the frame got bent, and getting the glass and rubber to fit depends heavily on the fit of this chrome trim. Before I sent it out for chrome plating, I spent some time checking the fit of the front and rear frames, and adjusting where there were problems. 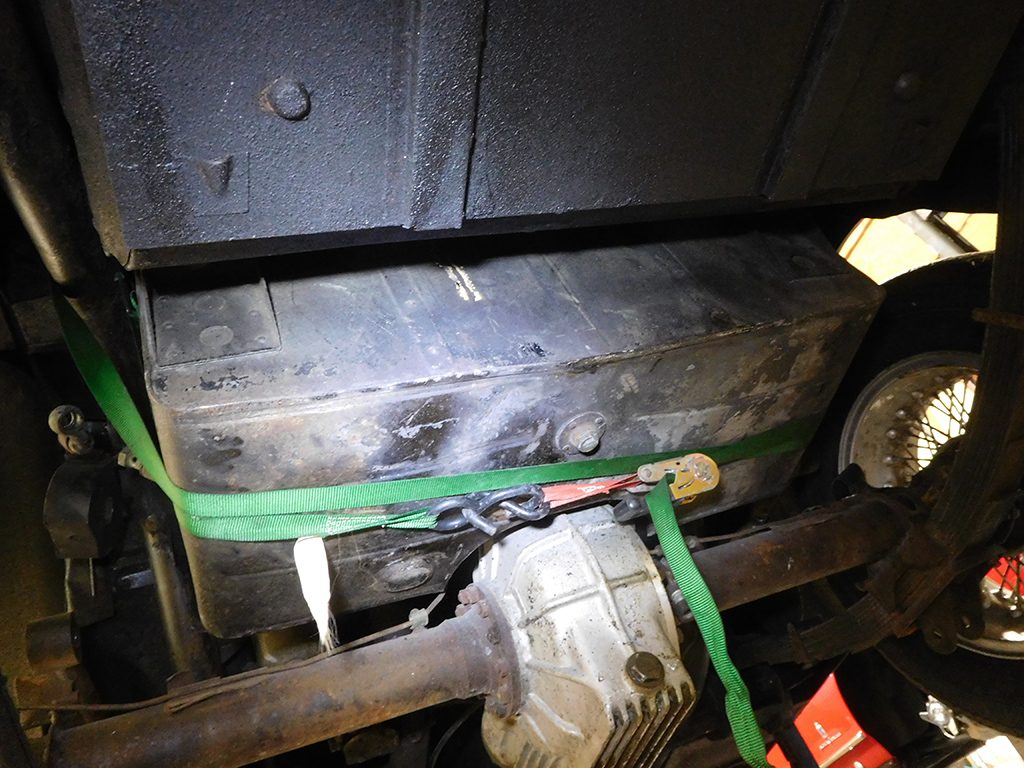 When the car was packed up by the previous shop, some of the parts were hastily assembled to make moving the car easier. The fuel tank was held in place with a ratchet strap! An example of sourcing parts; the correct hardware to reinstall this tank correctly was to find four bolts, with matching castle nuts, four fender washers, and 8 non metallic spacers. I put that on the growing list of things I’ll have to find or buy. 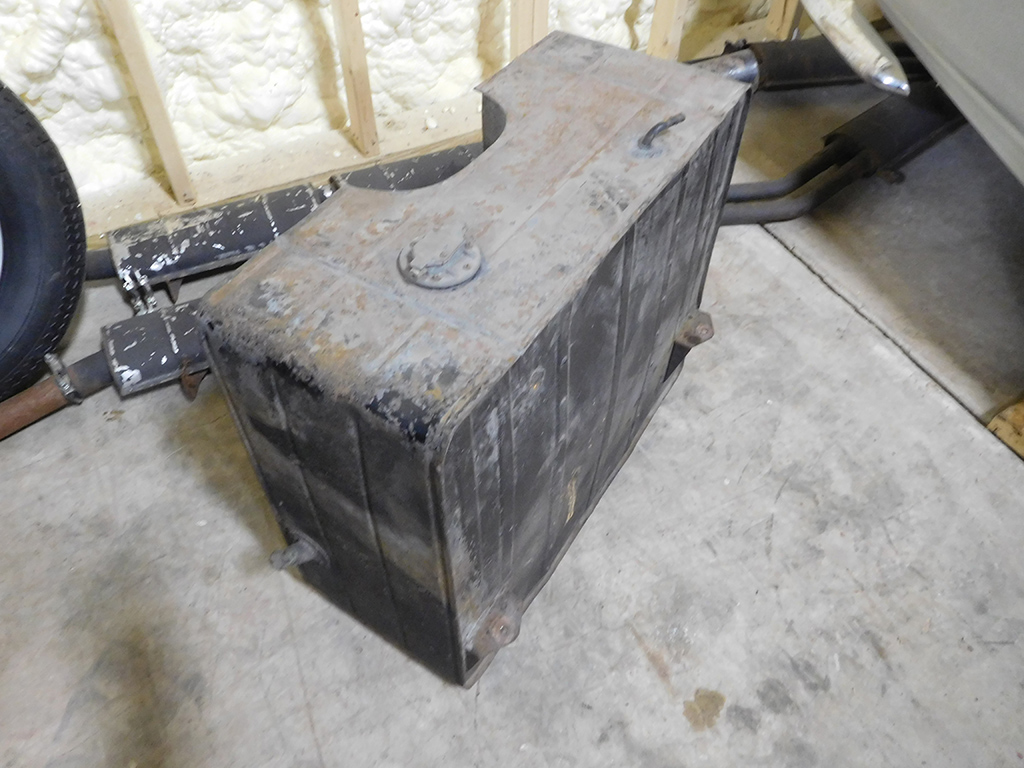 With the fuel tank out, I’ll pull the fuel lever sender out for rebuilding and send the tank out for cleaning and sealing. 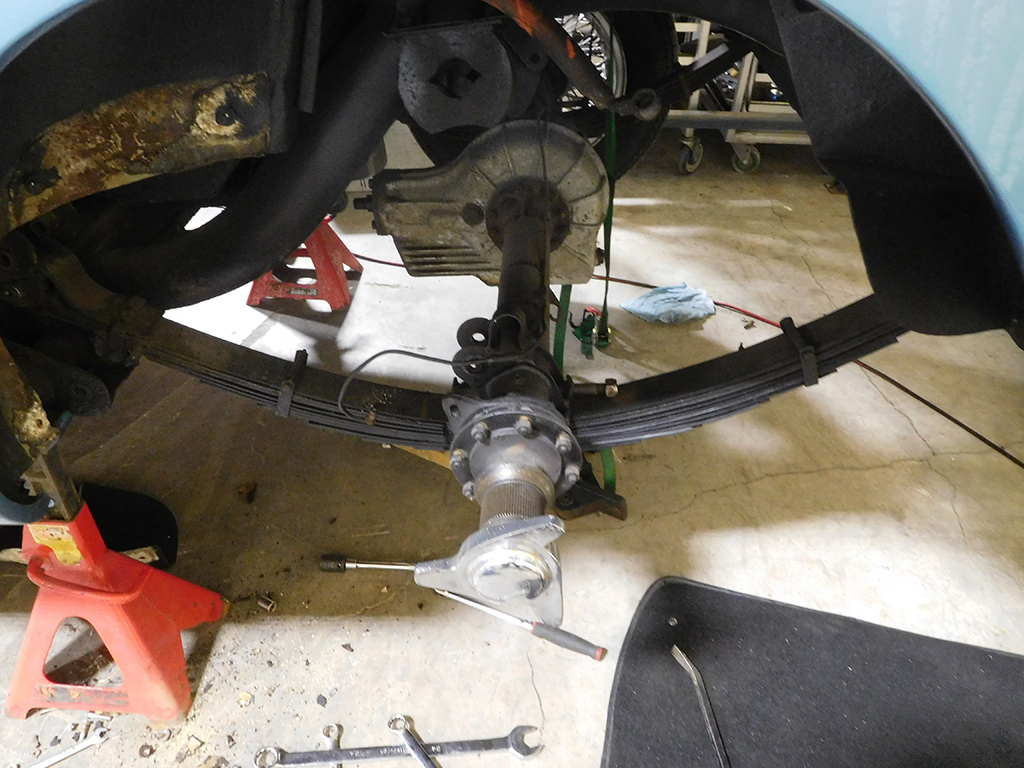 The next item to tackle was the rear suspension. The brakes were previously removed, and I suspect the suspension was also partially unbolted because something wasn’t right. 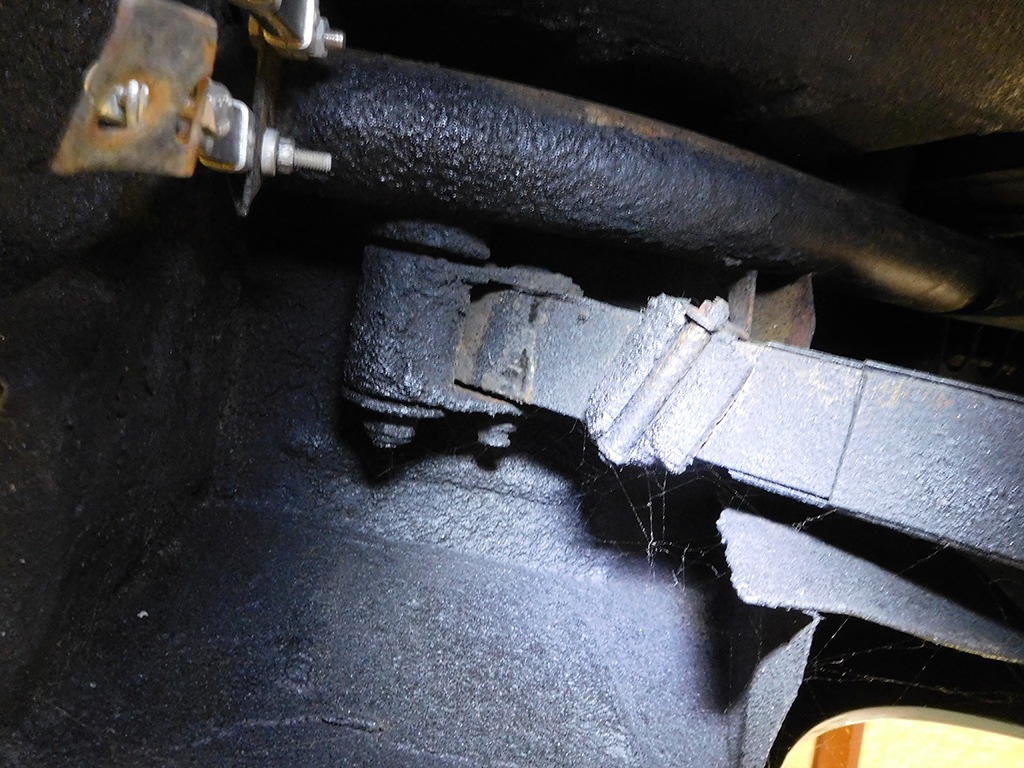 Looking up where the leaf spring shackles were on the rear suspension, I could see they were not in the right positions. Ferrari had a wacky way of installing their rear leaf springs with a lot of pre-load. If they’re installed without a fixture, it’s nearly impossible to get the car to the proper ride height. The only way to correct this problem with this car was to remove the springs and re-set the ride height with a spring fixture. 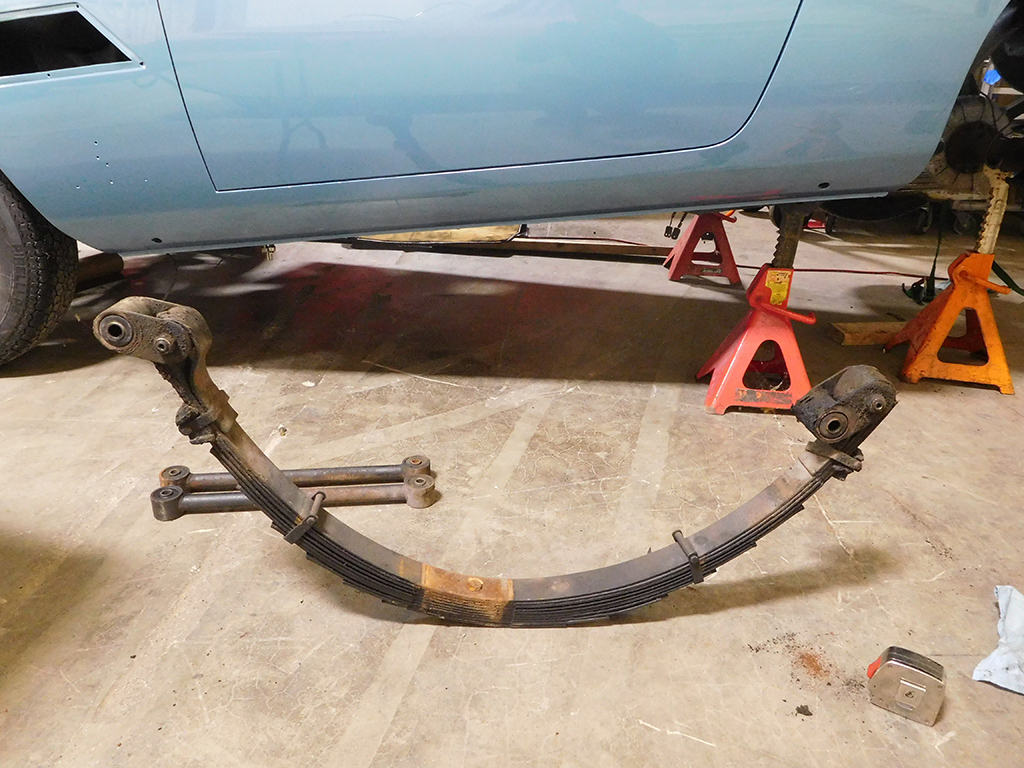 I removed one spring, and you can see without tension, the spring relaxes into the shape of a “U.” This shape will not line up with the chassis without first flattening the spring’s pre-tension. If installed in this configuration, the shackles would be the in the wrong position, altering the ride height. 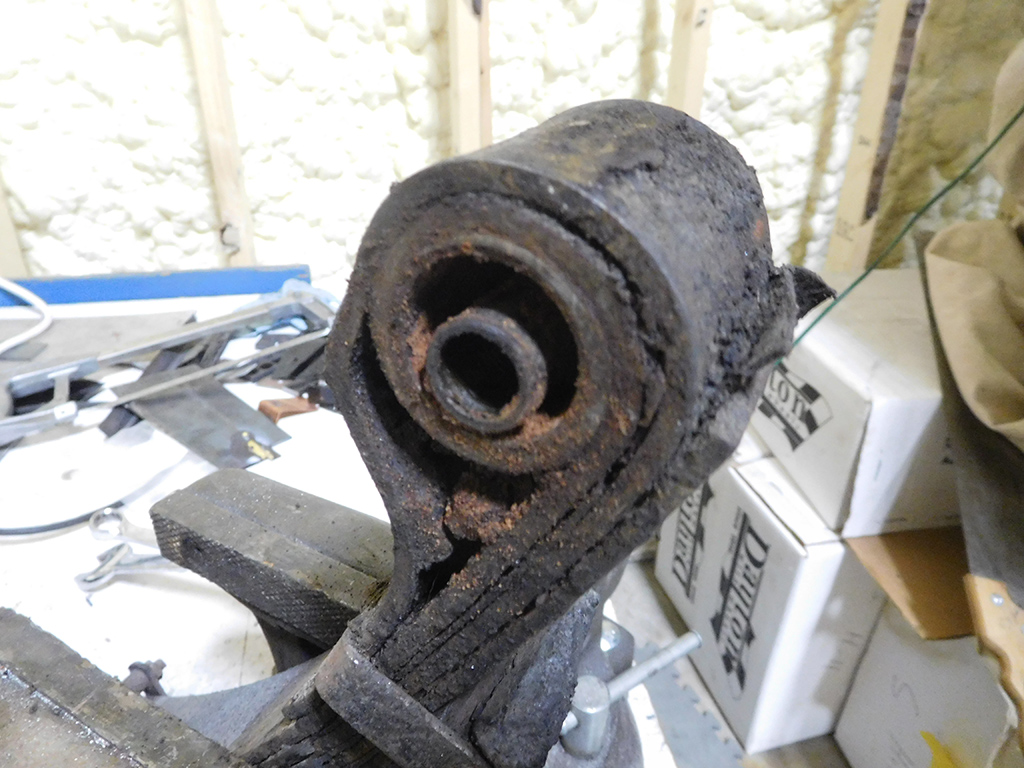 Another common problem is the spring eye bushing was worn away to dust. Ferrari used a very soft material for this bushing, and it wore away quite quickly. Many shops replace this bushing with a rubber silent block bushing, but I don’t believe that was the original design. They used a softer bushing for the spring eye so the joint could pivot. The rubber silent blocks were used elsewhere. I will be replacing this with a bushing made from Delrin, and plastic bushing that has similar properties to the original material, but will last a lot longer. 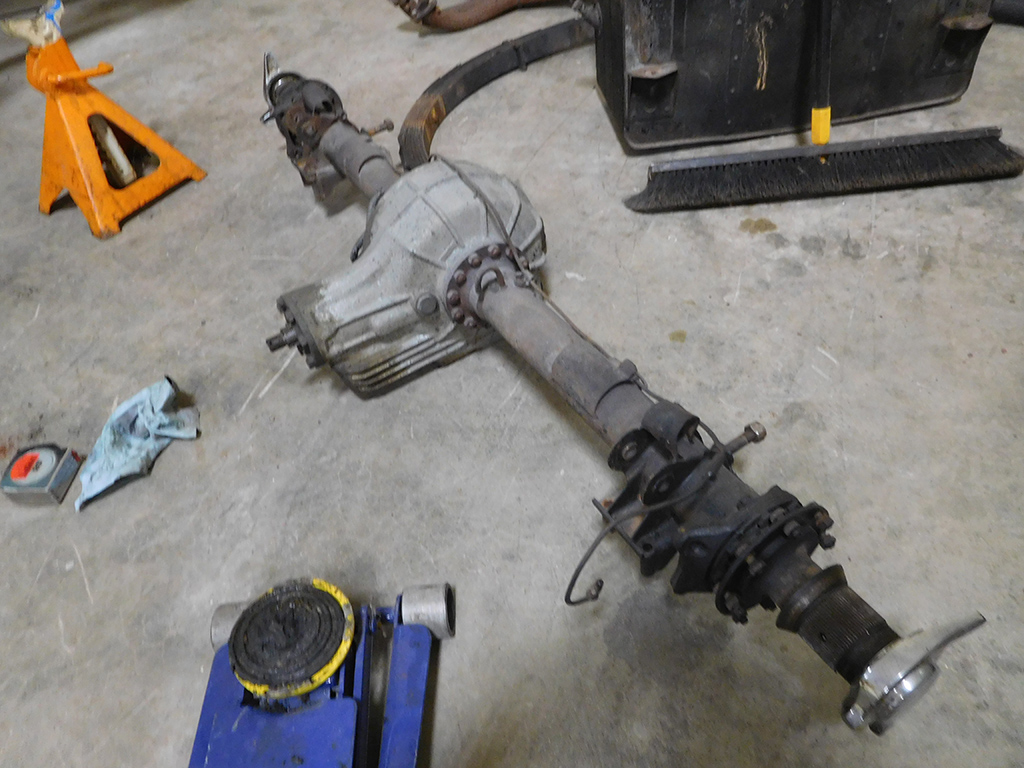 With the rear differential out of the car, I will be addressing the brakes and seals. 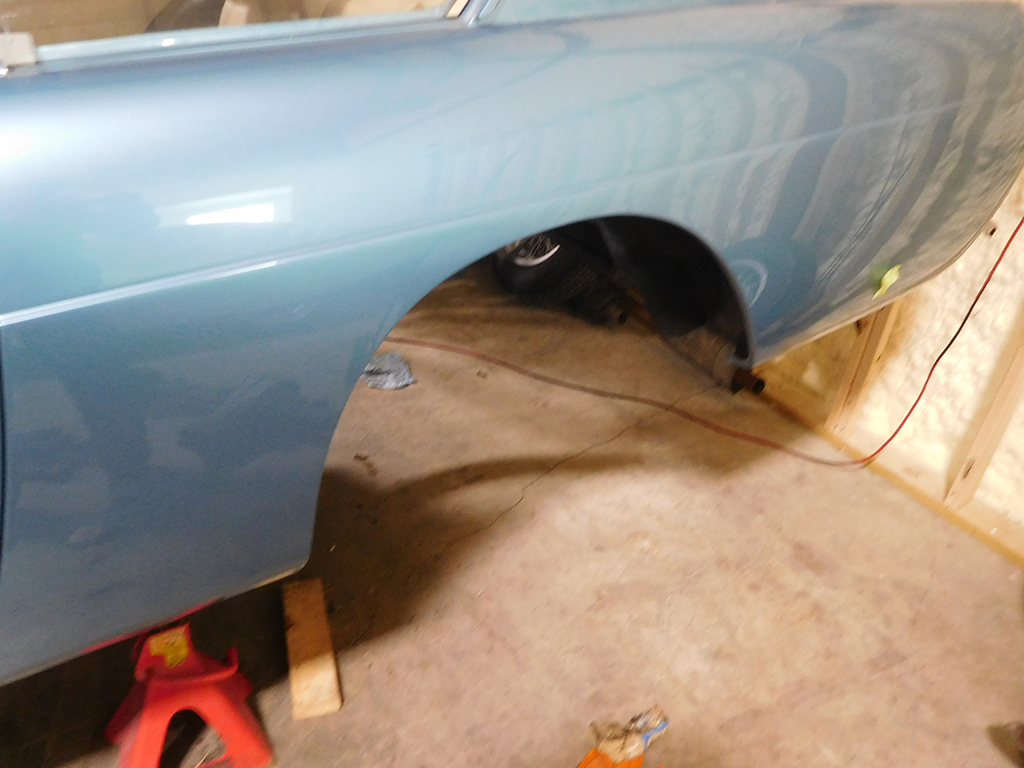 Stay tuned to see how I make out with the rest of the rear of this car.