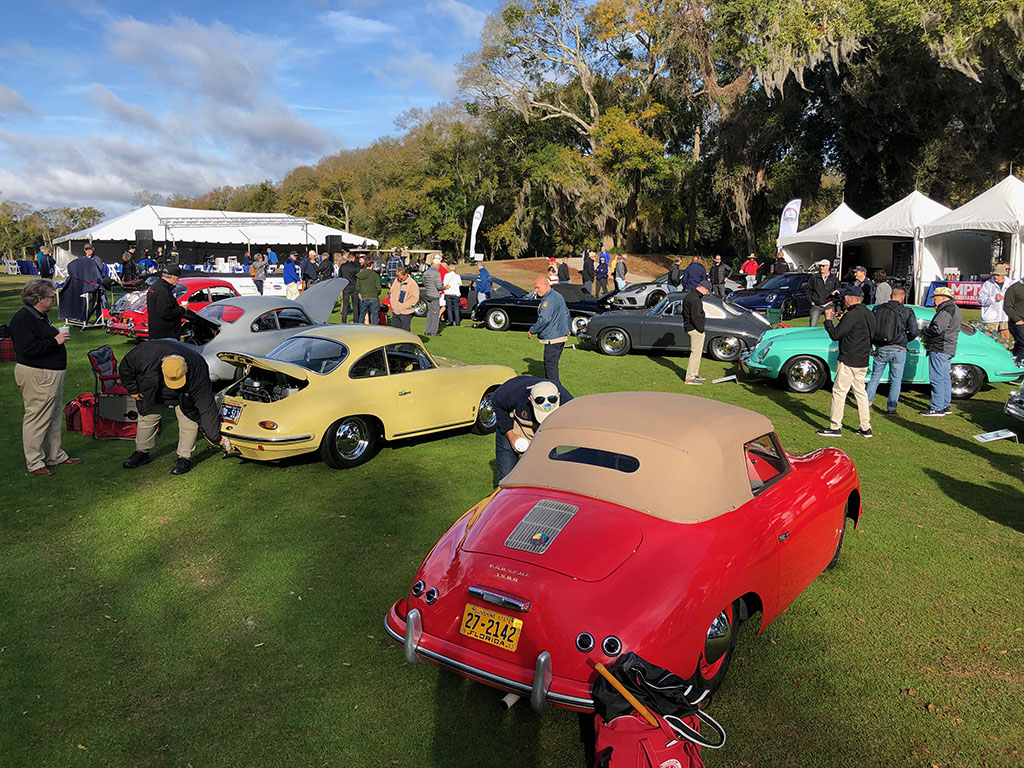 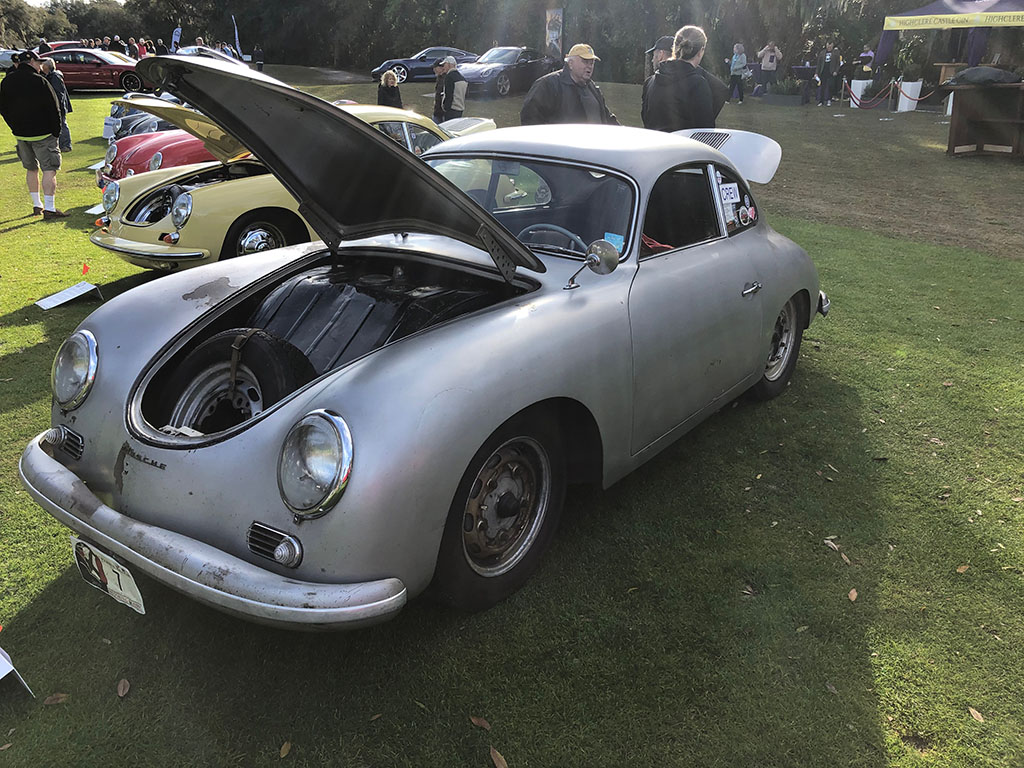 My favorite Porsche of the Werks Reunion was this original unrestored 365 Carrera GT found in Brooklyn after being stored for 46 years! 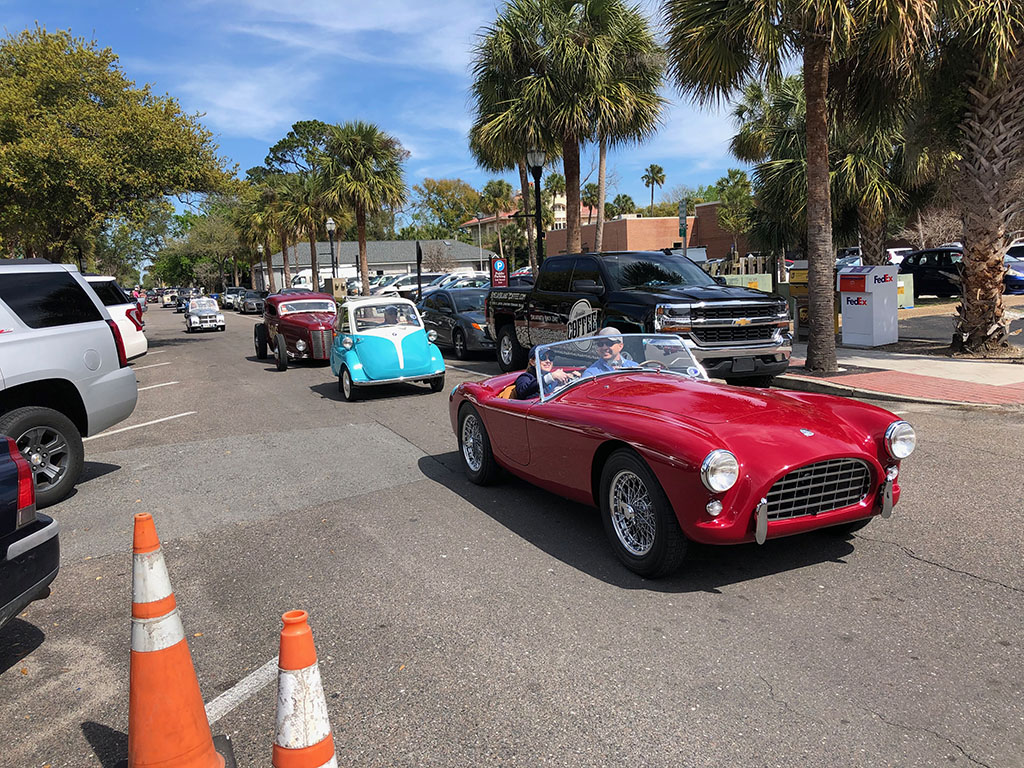 We headed over to downtown Amelia Island to watch the concours cars driving on the tour. 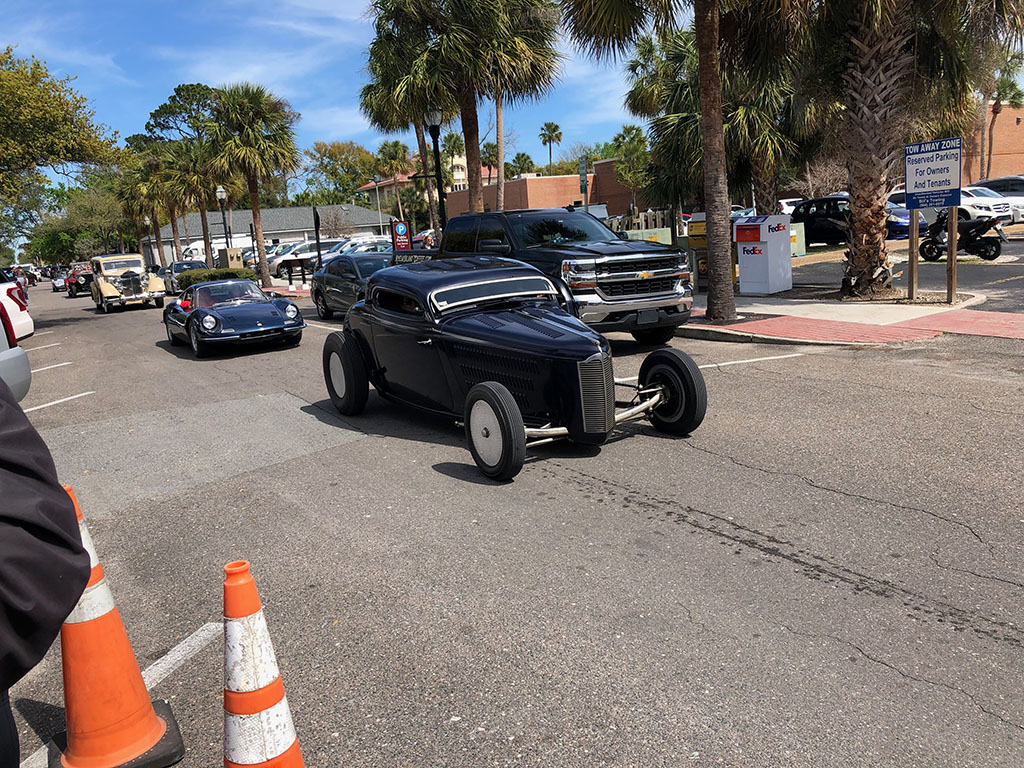 A bunch of Hot Rods rolled into town from the “Rolling Bones” hot rod shop from Upstate New York. 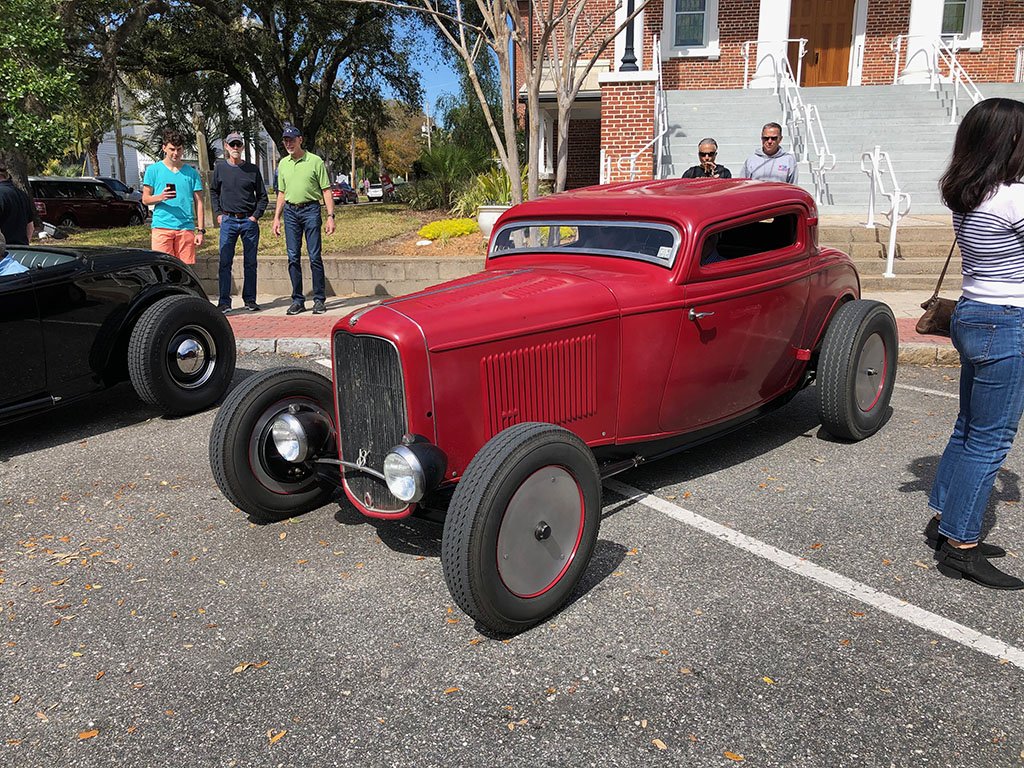 I was introduced to Tom McIntyre by my new rally friends arriving in his nice three window coupe. Mr. McIntyre  grew up in Los Angeles in the 50s and told the story of how he got his license at 16 and immediately drove his Model A into LA. There he met other kids with newly minted driver’s licenses, immersed in a culture of cruising and racing. As he told his story over dinner one night, I blurted out “Do realize you were living the life in Los Angeles that has been written about in books, movies, and songs that covered the whole Southern California Hot Rodding Lifestyle!?”

He stories continued into the night about how having so much fun cruising with his friends, they would meet every night and hang out. The kids in their teens and twenties immersed in the car culture had names like Edelbrock and Iskidarian, guys that would eventually build speed parts and engines that would be legendary in the automotive world, but back then, they were kids racing on the streets in LA! 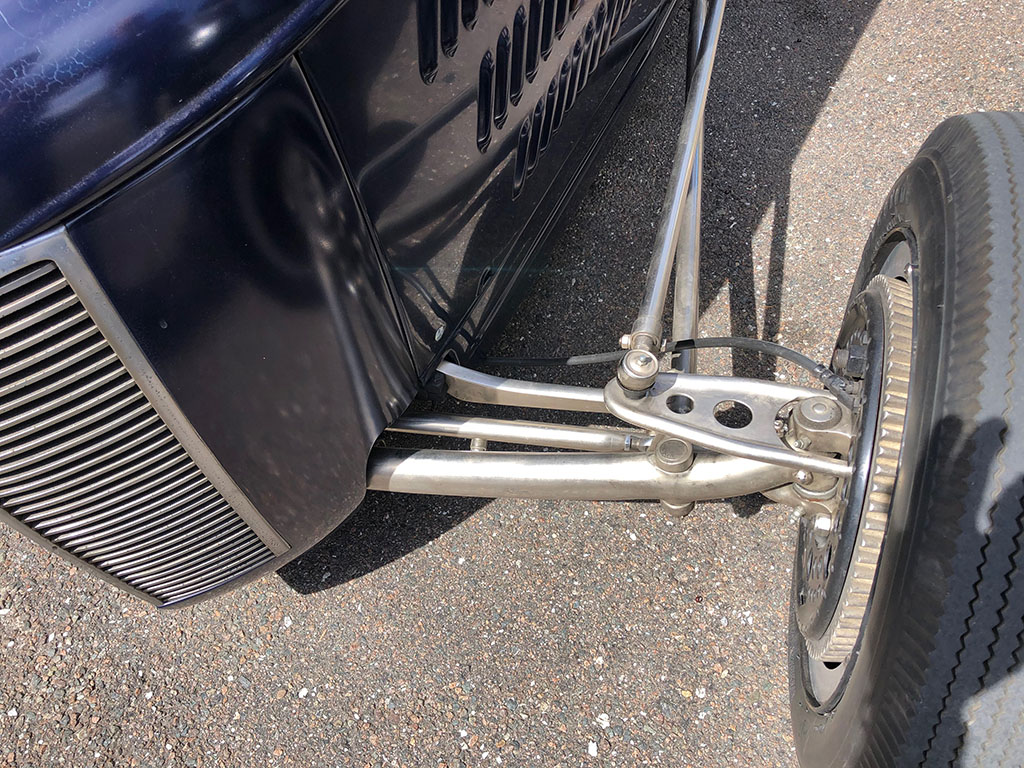 With the number of Rolling Bones cars parked on the street of Amelia Island, my friend Carter “schooled me” in all the intricacies of suspension set ups and how the hot rodders do it. 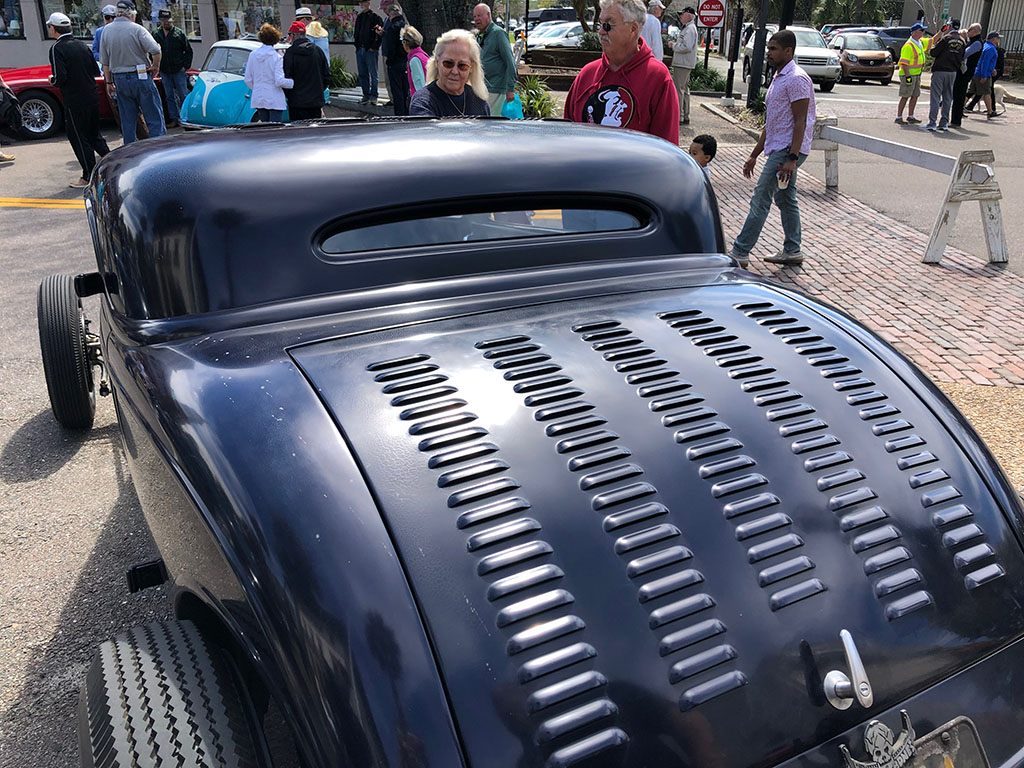 I knew the shapes of these cars were a product of racing and going faster on the dry lake beds. Cars built before the 60s were tall and offered a lot of head room. Quite simply, the fashion of the day was people wore hats, so the cars were built with lots of head room. As young men returned from WWII, they wanted to relive the fast airplanes and machinery of the war, and these lanky top heavy cars were not what they wanted to drive. Decreasing the size of these cars facing the wind just like the planes of WWII required cutting the height of the roofs and laying back windshields. An extreme “chop” also announced how serious you were in modifying your car to go fast. The Modern Rolling Bones ideal celebrates this lost art of stripping these cars to the barest essentials. 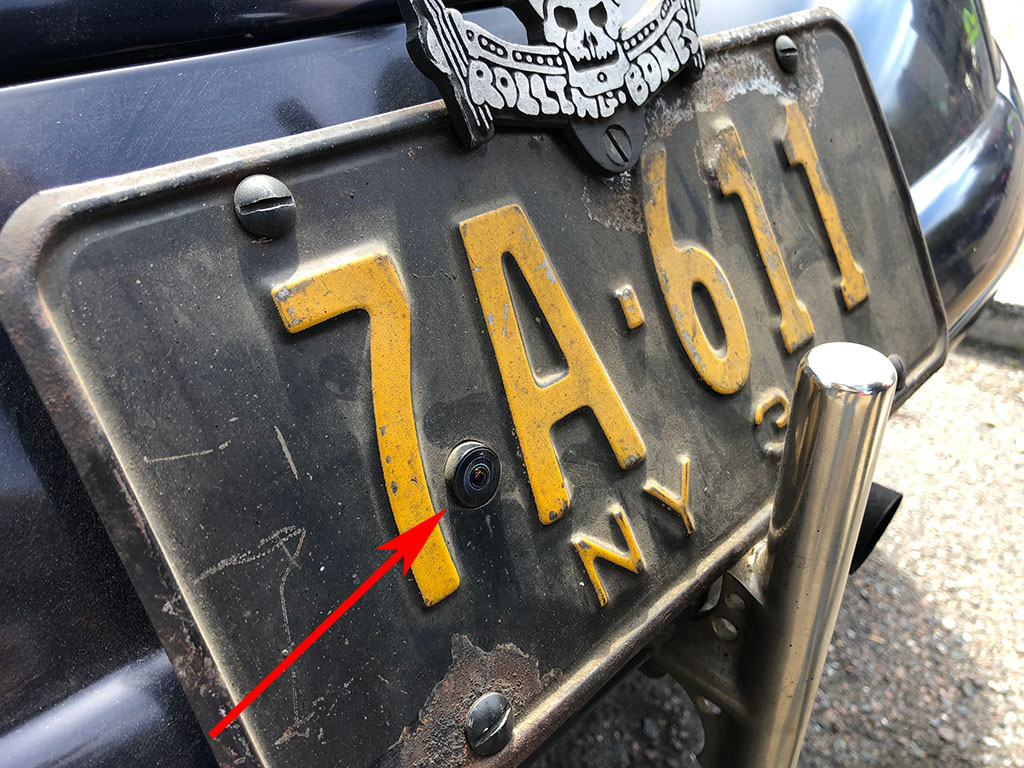 The outward view would seem to be limiting for such a low roof line, but the guys showed me a modern solution for an age old problem. The forward vision is not as bad as it would seem, but the rear view is probably the most challenging looking out a tiny rear window. Installing a backup camera hidden in the license plate wired to a screen by the driver’s sun visor full time works as a rear view mirror. I’m sure if you reverse the image, it would really work as a mirror! 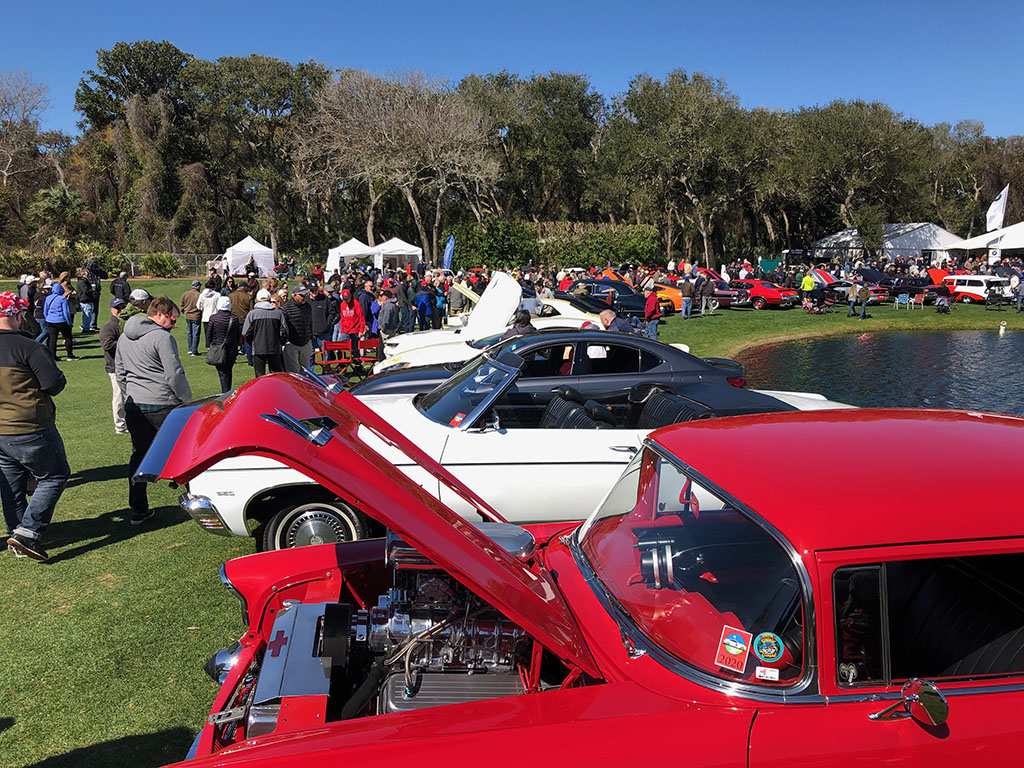 Saturday was “Cars and Coffee” at Amelia Island held on the showgrounds at the Ritz Carlton, the same place at the Concours the next day. It was a free show for the spectators but the entrants had to pre-register to get on the show field and it was packed! What a great event with some very high quality cars on display. Concurrently, there was a Concours D’lemons, and auction previews to see,  so there was no lack of car things to do on the Island. 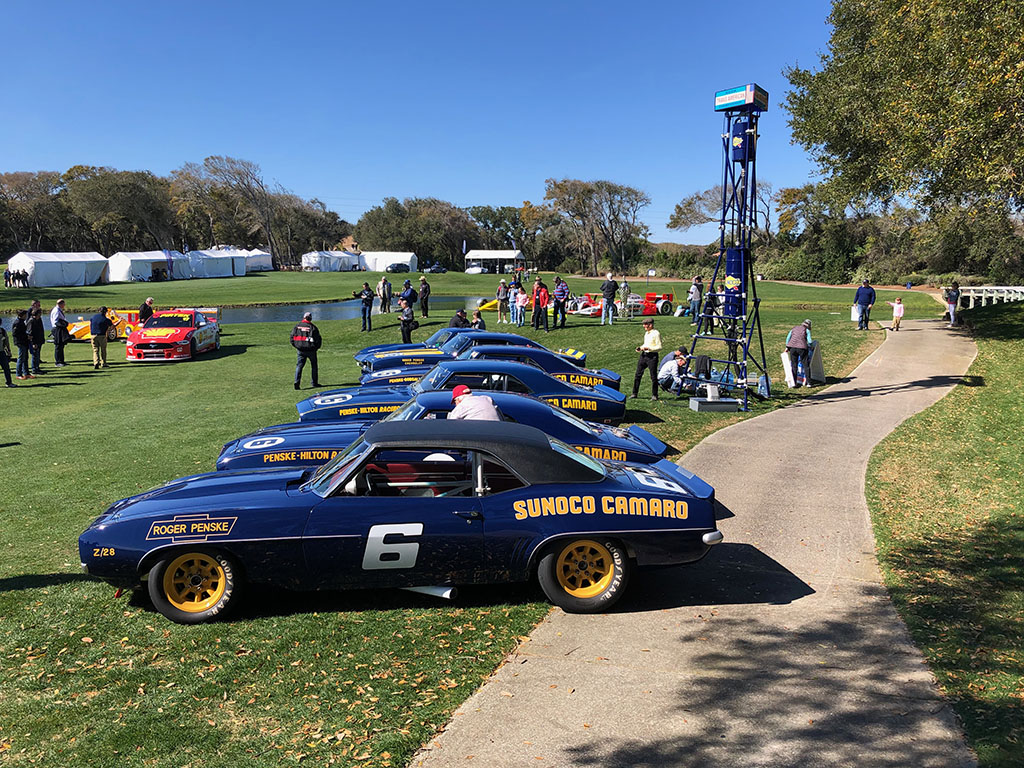 That afternoon, the showfield was cleared and reset for the Concours on Sunday. If you managed to stick around, you got a preview of some of the show cars for the main event. 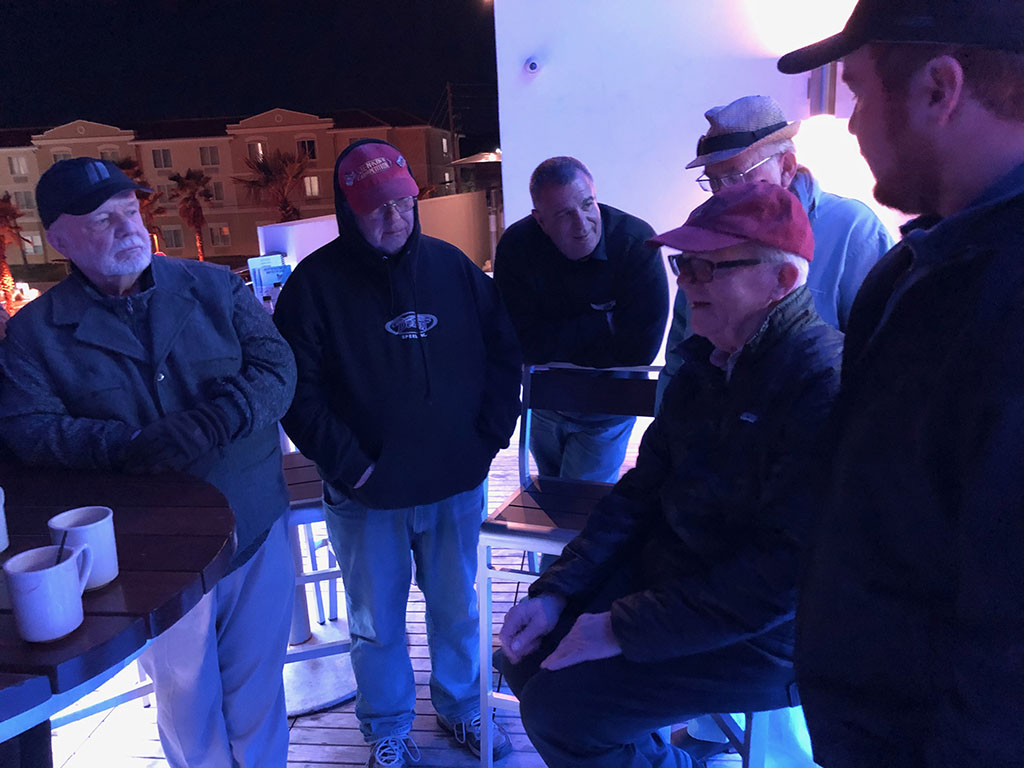 That night, I was invited to a dinner hosted by Tom McIntyre in Fernandina Beach and his hot rod friends. About 100 people came to dinner, but I stayed late to hear Tom tell more stories about the old days. My new friends knew the right combination of Jack Daniels and prodding for stories of automotive lore. Tom owns a business making car emblems, and one of his first customers was Carroll Shelby! Just being included to hear these stories was an honor! 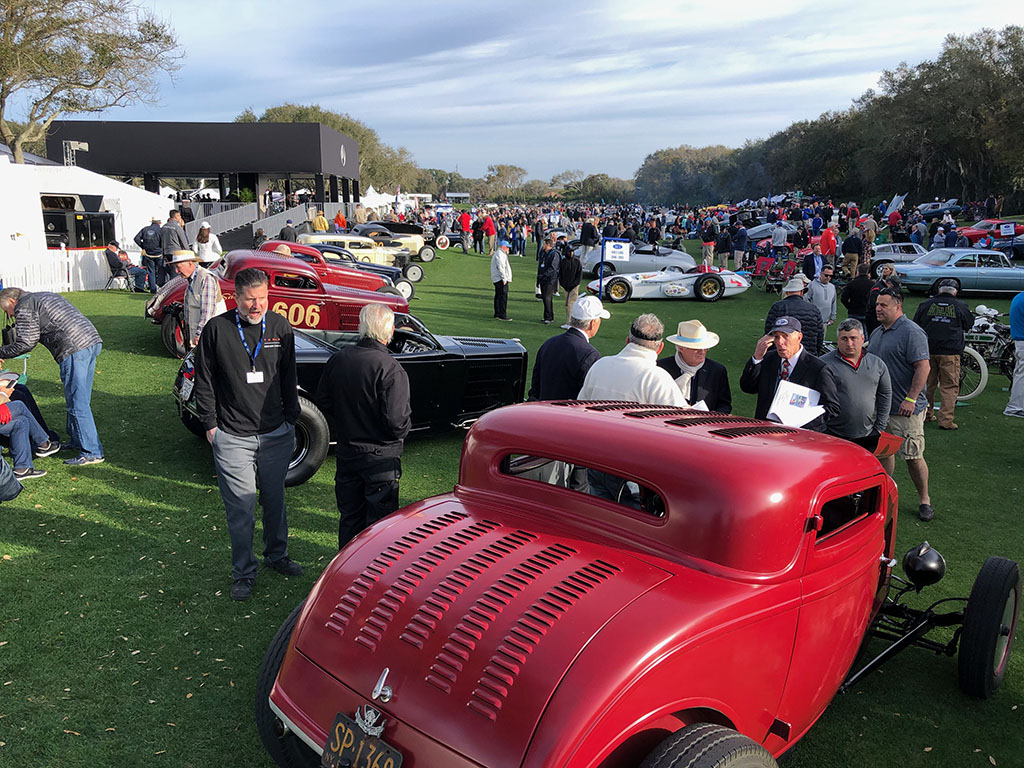 The Sunday Concours was packed for the big event. The Rolling Bones cars got the top of the lawn for a display and McIntyre’s car won a trip to the podium. 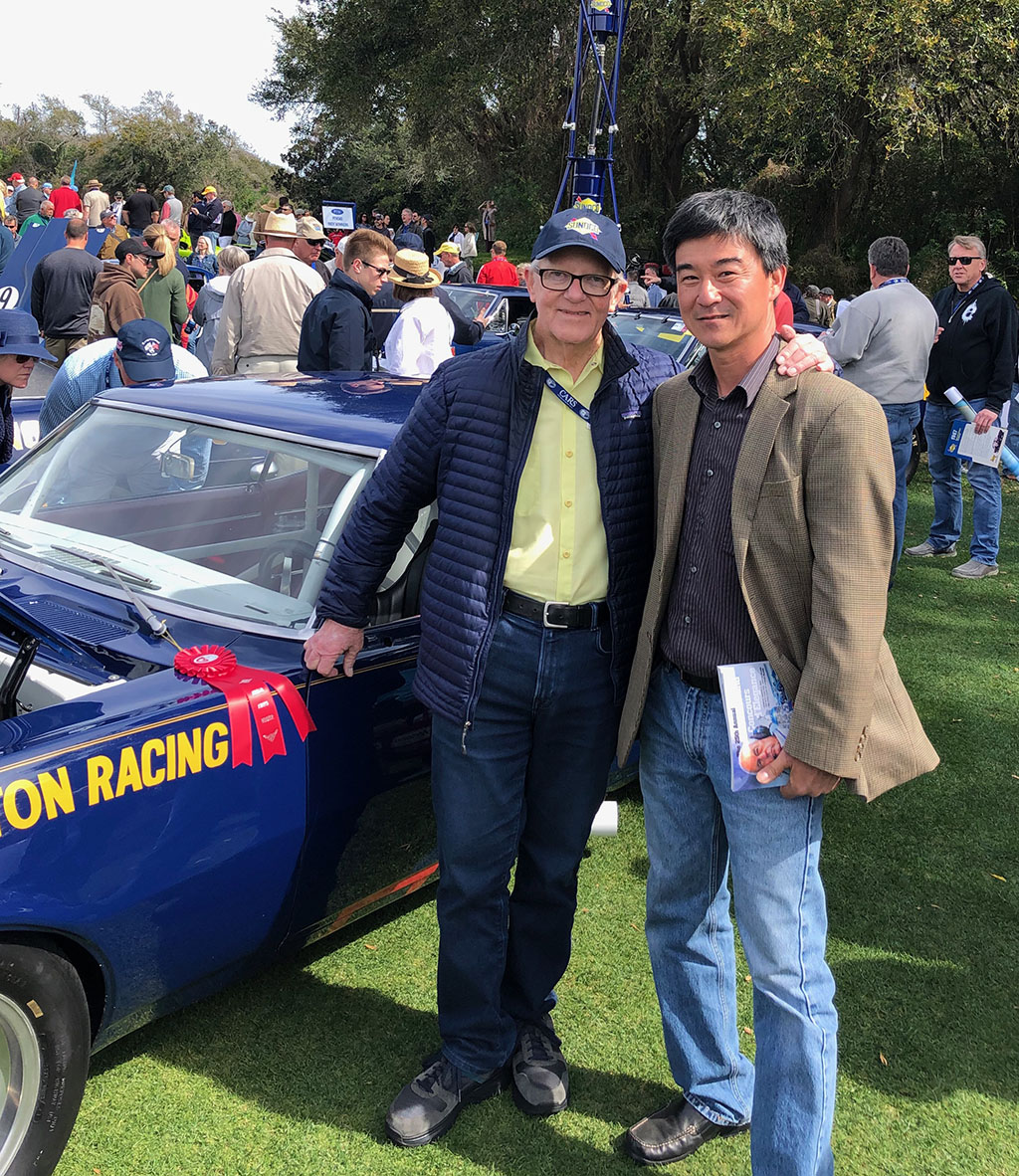 He made a second trip in his Penske owned Camaro race car. It was so much fun to watch Tom McIntyre honored for his cars and the enjoyment he took from a life around all these cars. I felt I had just scratched the surface on the history of this man, and hope to hear more in the future! 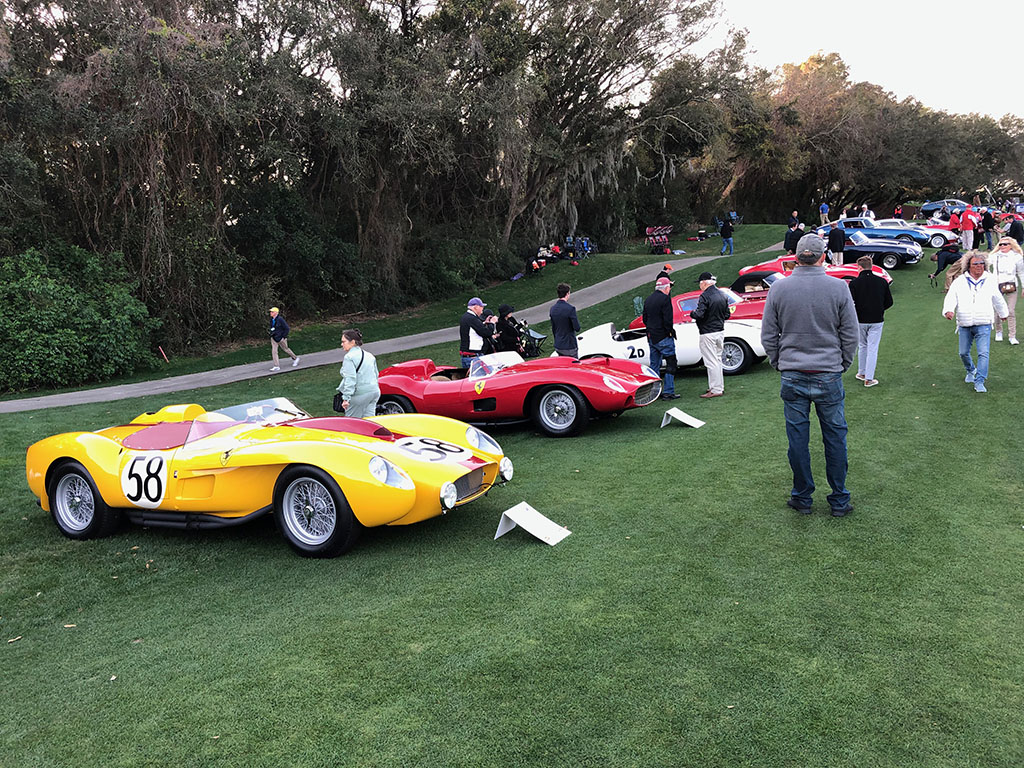 The display of Ferraris was pretty impressive with plenty of Testarossas and two GTOs! 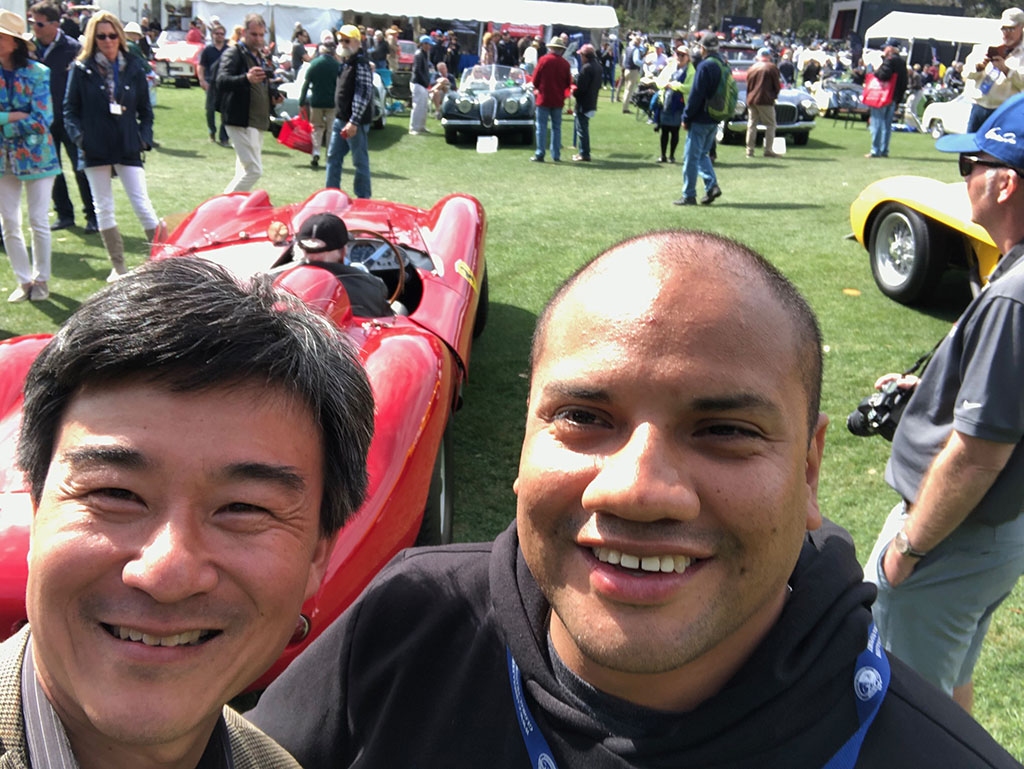 After hanging out with the Hot Rod Guys, I jumped back into the Ferrari world and caught up with friends. Richard Lincoln  and I took a selfie with Peter Sachs in the background sitting in his race car. 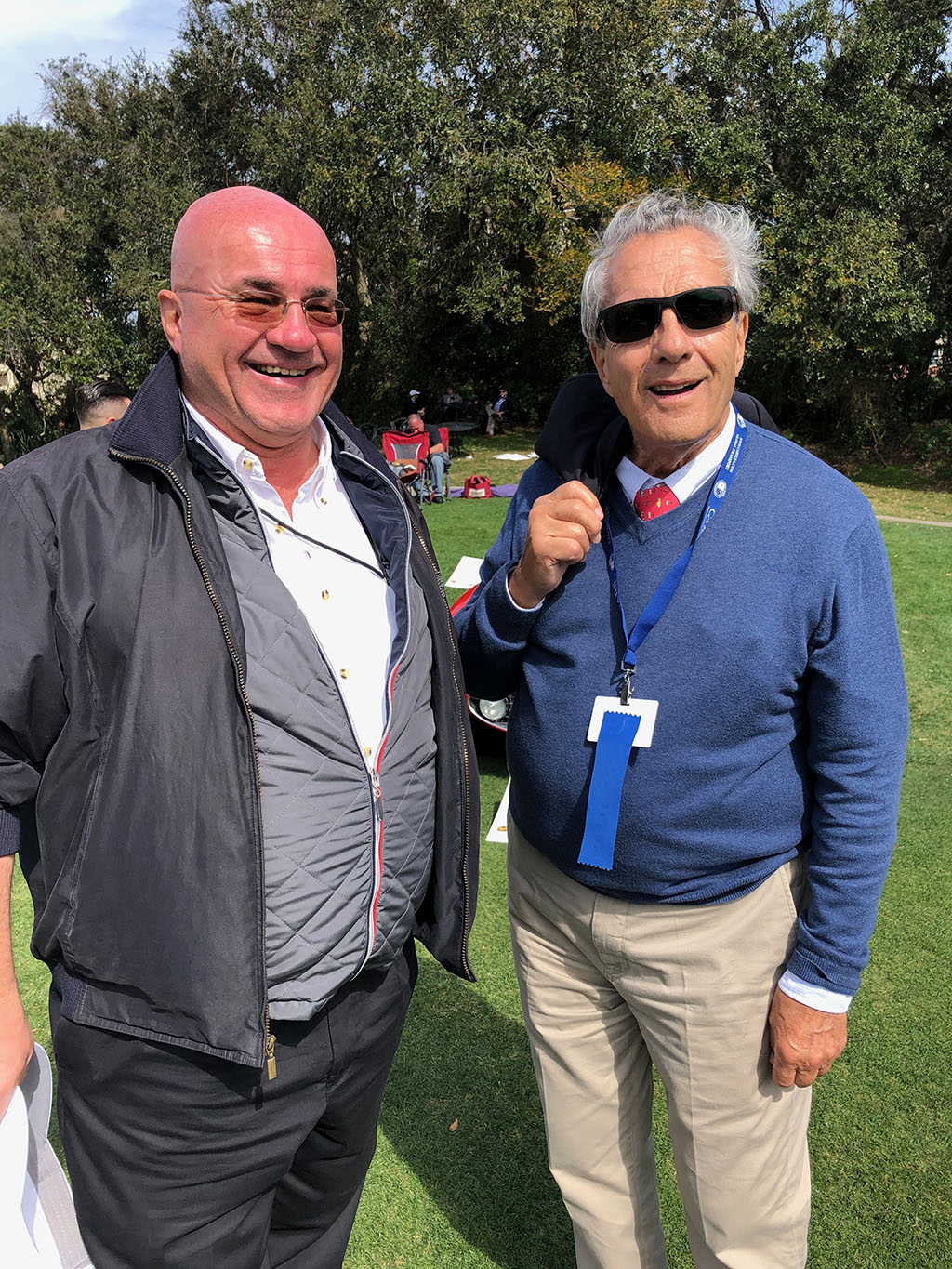 You know you’re big in the Ferrari world when everyone knows you by your first name. Marcel is on the left, but the gentleman on the right has several names depending on when you knew him. Coco by the old timers, Luigi by younger guys, and Mr. Chinetti to everyone else! 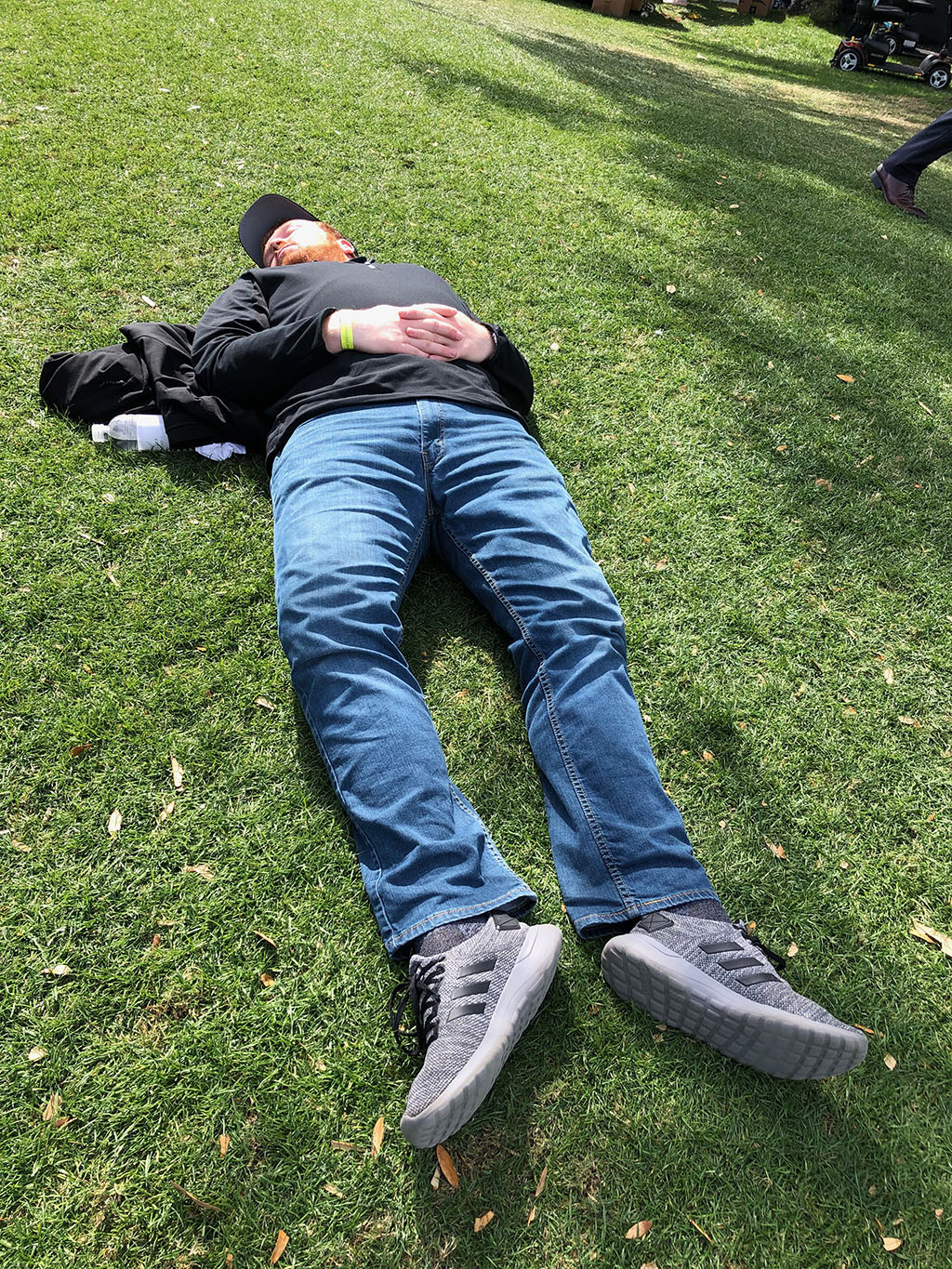 I think this picture sums up how I felt after going for 9 days straight when I started my trip to Amelia Island on the Hagerty rally. Taylor was part of the Pennsylvania crew I met for the first time a week ago, and was just as tired as I was! I was looking forward to going home and get some rest too, but can’t wait to do it again next year!