I'm about to install motor mounts on my car (4 in my case). I'm assuming that this can be done with the engine in -- can I disconnect the exhaust, hoses, etc. and jack the engine up sufficiently far to reach things? Anyone done it this way?

I don't know if you can replace the motor mounts by jacking up the engine. Francois and I make teflon bushings for these mounts. They're more durable and we never have to worry about them again.

For the transmission mounts I found these at Moss Motors. They're exact replacements: 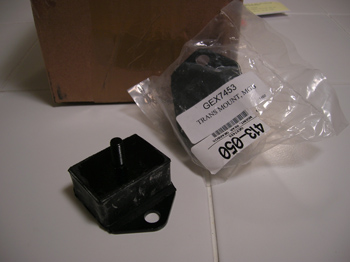 Just did it that way and yes it works. Tried to post more detailed reply but I type too slowly and reply was sent to bad place. If you want more of my saga email me. JR
Top

Sorry about the message rejection. It's a new software solution to keep spammers away.

Whenever I get one of those messages, I hit the "back" button on my browser, copy the text I just wrote, and then I paste it into a new message. I would love to read how you did your fix, and I'm sure others would too. If you have any problems, send me an e-mail:
tom@tomyang.net

Here will be a roundabout reply on jacking up the engine and replacing engine mounts. I recently did just that and was successful, I think. First, a little saga on 5827. I purchased this auto, my second series II, over the internet. Yep, sight unseen four years ago from southern CA. From what I can piece together here is what I think is the background for the auto. It is really a one owner, re-covered leather and one re-spray, well used and not terribly neglected. The owner put it in a shop for some sort of “restoration” and then he died. Now here is where I really wish I could have found the exact shop because it seems the shop had begun some dismantling and when the estate asked for the car to be sold the shop just threw the car back together and many small pieces were missing. Let’s see, rear view mirror, spare tire hold down, one door sill trim piece, several hundred screws (but the piece would be held on with two or three original and I had those to copy), both shock tower covers, and so on. Nothing Fred P or Tom or Black Bart couldn’t replace. It did not originally have a console but I got one anyhow. When I took the transmission cover off I found one split mount (and no correct mounting bolts) and looking forward I found no correct engine mounts (and only two correct bolts). As I had the rusty entire exhaust system off, I used a bottle jack and a soft piece of wood under the rear edge of the oil pan to jack up the engine and trans enough to slide in the new washers, cups and bushings. The cups and red rubber bushings were wildly expensive and originally I only thought I needed two sets. I asked around and found I needed four so not wanting to pay more I found a commercial company here in town that makes all sorts of rubber stuff and the co. matched the rubber for consistency and almost for thickness (I used some sand paper). Ironically, the man behind the counter just gave me about a square foot of the rubber. The front mounting bolts, according to the Ferrari diagram, are supposed to be mounted head on top, but no way can they be fitted in that way unless the exhaust headers are off, so mine are head on bottom. I think the split trans mount was caused by the incorrect alignment of the engine owing to the lack of correct engine mounting hardware and the resulting alignment. Anyhow, when I dropped the engine with its new mounting hardware everything lined up nicely. Whew! Good luck to you. John
Top

I was just messing around with my 330 America today, and found the Moss transmission mounts are about 3/16 of an inch thinner than the original mounts. I will probably make an aluminum or steel spacer to shim the rubber blocks to the correct height. Journal entry to follow!

My only concern with Teflon bushings would be if they allowed more vibration to be transferred into the chassis. I have used teflon bushings in front suspensions before and did not like the harshness associated with them. I realize that there is not much insulation in the original motor mount to begin with, so it may not make that much of a difference in the feel. I like the design of the my 330 GT mounts better.

My only concern with Teflon bushings would be if they allowed more vibration to be transferred into the chassis. I have used teflon bushings in front suspensions before and did not like the harshness associated with them. I realize that there is not much insulation in the original motor mount to begin with, so it may not make that much of a difference in the feel. I like the design of the my 330 GT mounts better.

In a front suspension, I could see harder bushings being harsh, but I think the frequency of the vibration being different in the engine mounts. The best bushing would probably be a soft polyurethane. They make all different densities, and I'm sure there is one that is similar to rubber, but durable like plastic.

For the sake of closure here, and for future information-seekers:

Having now done so, I can say that it is indeed possible to completely replace front and rear motor mounts and associated pieces without removing the engine, though I would rate it extremely high on the PITA scale. Perhaps it was more challenging with a 330 America, given the large motor and small clearances involved. There are a few tricks to the procedure (including, in my case at least, that it's impossible to remove the front through bolts without removing the motor mount and the bracket attached to the frame at the same time). Making it more difficult is the fact that the diagram is unclear about the proper parts replacement and order for the rear mounts. Thanks to folks who helped me figure out the proper pieces and placement, especially John Rangeley.

All that said, post-mounts this job is also very high on the reward factor: it was transformative with regard to the smoothness of the engine and idle, and really quite noticeable.

Although I don't know how many other of the 49 330 Americas will need this proceedure done without removing the engine, if you want, you can write a "tips" article and I can post it in the Restoration Tips section of this website. Your insight may help someone else thinking about replacing the motor mounts on their car.