I'm still working on all the details on 3553, Gary's GTE, and I wanted to survey which flags you all have on your GTEs. The one in the foreground is the one that was on 3553, and is pretty beat up. I believe Black Barts has one, but I wanted to make sure I'm getting the right one. Francois had a spare emblem, but it is different from the one that came off the GTE. Anybody know what car gets that one?

Michael Greenspan's original largely unrestored 330 America came with these flags, so I put the same on my car. I'm just confirming that GTEs came with the same flag: 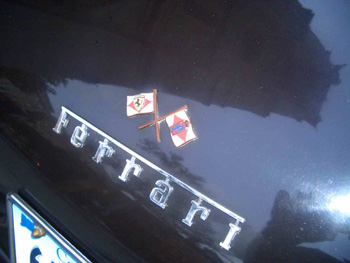 My flags are similar to the others with the red diamond against the white background.

My flag is the same, red diamond on white background.
That original beatup flag can be saved and redone.
I am sure I have seen places that redo all sorts of emblems
and badges. Would be nice to save the original badge with
the car!

The period GTE shots I have show white flags.

#2811 has white flags, and is original. They looked about the same as your example. A little Brasso and a soft cloth later, they look new.

I too have white flags with red diamonds. I recently discovered that my flags have been - horror of horrors - glued to the trunk lid. The clever worker had even glued the broken threads inside so nobody would find out he broke the emblem! Luckily the emblem is 3.5 millimeter thick, so I drilled holes with M3 threads to it. I then screwed in 1/8" brass screws. No glue or solder needed! Best wishes, Kare
Top

FYI the flags are letters in the international maritime signaling system. The white & red "F" is for Ferrari, and also Farina. The white and blue "P" is for Pininfarina. Jim
Top