It pains me to have holes drilled into the rear of the Lusso to attach a license plate. My choices are:

1.) Use a license plate bracket that has suction cups and attach it only when driving. These are used on some of the Ferrari vintage race cars. But what if it flies off while driving and chips the paint and also risk losing the plate?

2.) No license frame, drill the holes and attach it to body.

3.) Cheap frame- Disposable and since they didn't come with the factory with frames it doesn't matter what it looks like.

I know this is truly a first world problem but its a dilemma for me. What are your thoughts?

Greg,
Just thinking out of the box. There are some very strong and removable, if needed, double sided tapes which may be worth considering. 3M and other name brand manufacturers may have something that will solve this issue and allow removal of the plate without damaging the finish of the vehicle. The tape would be concealed behind the plate and not be visible. A light weight frame could also be taped to the plate or caulked to plate. I have used doubled sided tape behind the plate so the vibration of the plate wouldn't damage the paint on my car. This was on an Aston Martin and the plate was attached mechanically by two screws to the car body. I am located in NJ. NJ plates are very thin aluminum and I think the double sided tape would definitely work. I feel your pain with the possibility of having to drill holes into such a great car. Best of luck.
Art Becker
Art
1965 330 GT 2+2 Series 1 Interim car sn 7091
Top

I personally think you're over thinking it! I think it'll look more goofy to have license plate lights shining in something that isn't there! Get your drill out and mount the damn plate!

...but seriously, dealers often have a dealer plate with a soft backing and two rubber straps that can be trapped by the trunk lid when you want to temporarily mount the rear plate to a car you want to drive.

I've gotten used to having a rear plate on these cars, where it actually looks wrong without it. A plate breaks up that flat rear panel that seems empty without it. I believe the designers took that into account when they made that car, especially when they had to add the rear license plate lights. Now, I totally agree, there is no good place to mount a plate on the front of a Lusso!

A nice chrome frame is what you want. I think Gary Bobilieff makes them.

Just my 0.02, but I just couldn't in good conscience drill holes where there are none; future source of moisture intrusion, possible corrosion, etc.
How about a nice bracket created to mount to the bumper and then flow up to the appropriate position, without touching the rear panel? 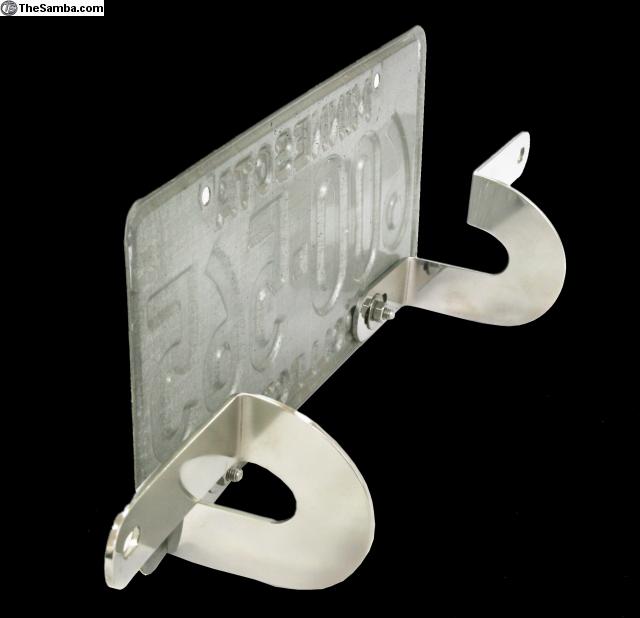 glue a sheet of magnetic sign material to the back of the license plate.
Top

Greetings... You might look at the back side of this panel for evidence of previous holes. If the panel has been replaced, then why worry about it as your car is no longer "original".

I think Tom has shamed me into drilling holes and mounting a license plate frame. But I might try to double sided tape first....It does make sense since it is a road car so it should have a plate attached and the rear deck was designed with this in mind. I do have the bumpers ready to go back on as well. Thanks for the input guys.

Hi Greg, my first thought was to make 2 elegant looking brackets that could mount under or in some way in conjunction with the plate lights.Perhaps between them and the bodywork? Not much any of us can do to make a Lusso look bad.Good luck,Mike
72,365gtc4,14681,2007 599 GTB
Top

I would figure out what the factory or dealers used in period to mount the plates and use exactly that, which will likely require drilling. For the 330GT, the factory made a frame specifically to mount US plates -- it is a super thin surround (stainless or chrome, I'm not sure) and it curves slightly with the contour of the body. It was a Ferrari factory part -- if they have the equivalent of that for the Lusso, it would be worth hunting one down.

If you really want to avoid drilling, then Scotch Extreme "velcro" will work (https://www.homedepot.com/p/3M-Scotch-1 ... /205520112) This stuff isn't really traditional velcro with fuzzy stuff on one side, it is made up of plastic hooks on both sides and it takes a lot of force to separate once you have joined both sides. If you've ever seen the tiny mounting tabs that EZ-Pass provides to mount their unit to the window, this is basically the same stuff.

If you look at the user review in the Home Depot link, you will see that he used it mount PS3's and other equipment vertically on the wall. I have used it to mount a heavy sign on a surface I didn't want to drill into. This is strong stuff! I think it would hold the license plate very securely, and be easy to remove the plate whenever you wanted (though you would still have clear velcro tape on the body). Be careful not to make the velcro strips too big so you don't have to use too much force on the panel to remove it (experiment with sizes to see how much force you want). If you wanted to remove that velcro from the body later, in my experience, it does come off cleanly as long as you start at a corner and work slowly (though that too I would test on another panel just so that you feel 100% safe).
Peter P
1966 330 2+2 series 2 #8169
Top

As stated above look inside for filled in holes, and if they match USA plates. Also, caution using two sided tape as outdoor use in sun and cool temps may cause loss of the plate on the highway! Dealers sometimes use a magnetic plate holder, but they move around sometimes.
Top

Greg, we welded up the Italian plate holes on the rear valance and the front bumper. In my opinion, the plate should mount onto the car the way it would have been originally. Stickies and magnets and all that is bunch of bologny.